Kombucha: the drink you never heard of that's now everywhere

Stop by Muse Brews at the Newaukee Night Market on Wednesday, Sept. 11. for a sample of kombucha and decide for yourself if it's a go or a no.

Five years ago, kombucha was far from being a mainstream beverage, but recently, the slightly fizzy, fermented refreshment has become more available at festivals or in conventional grocery chains and, consequently, more divisive. People seem to either love it or hate it.

Kombucha is made by fermenting black or green tea, sugar, yeast and a "scoby." The scoby, which is an acronym for Symbiotic Culture Of Bacteria and Yeast, looks like a floating, rubbery mushroom head (although sometimes it sinks to the bottom) and – like the name implies – serves as the "home" for the bacteria and yeast.

Kombucha is brewed for a week to a month and available in many different flavors. Some people describe it as tasting a little bit like vinegar, but Stefanie Lukomski who owns and operates Muse Brews says it shouldn’t taste too much like vinegar.

"I prefer the taste to be flavor forward and not too vinegary," says Lukomski. "And that’s what people say they like about mine."

Lukomski, who lives and runs her business in Belgium, in Ozaukee County, started making kombucha three years ago because she had a chronic, uneasy stomach and heard it might improve her "gut health." It worked for her – as well as for friends – and so she took the hobby to the next level.

Today, Muse Brews are available at the Newaukee Night Market, On The Bus in The Milwaukee Public Market and at the Shorewood Farmer’s Market. It’s $5 a bottle.

Muse Brews has five core flavors, two seasonal and a hops series. Many of the kombuchas have a story behind them and are named accordingly. For example, Road Trip, which is blueberry and lavender flavored kombucha, was named in honor of a fellow farmers market vendor who drove to Michigan to pick up 500 pounds of blueberries. Storyteller, a rhubarb and ginger drink, gets its moniker because when rhubarb is growing in spring, it sometimes makes noises that are so significant there are recordings of it.

"We thought it seems like the rhubarb is telling its story," says Lukomski.

Lukomski receives help with the business from her husband, Tom Smyczek (in photo, left), and her friend, Chelsea Mittermann (in photo, right). "They have both been extremely supportive," she says. 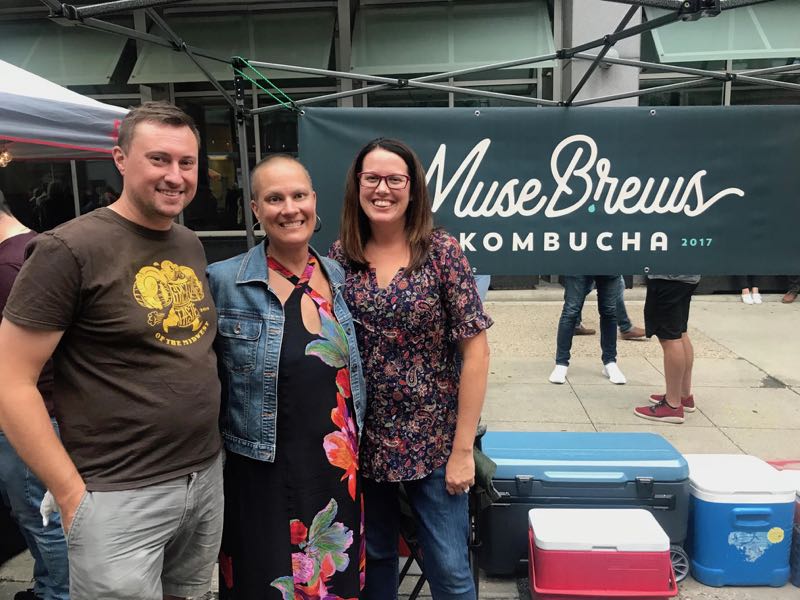 All Kombucha is slightly alcoholic. Muse Brews ABV is always below .5 percent, thus it does not require a liquor license and it can be sold to minors.

"For people who don’t consume alcohol, deciding whether not to drink kombucha is a very personal decision," says Lukomski.

Lukomski says she often encounters people who had a bad experience with kombucha or are leery to try it because it sounds weird or too healthy.

"I always suggest people give mine a try and just give it a chance. Most of the time people describe it as delicious," says Lukomski.

Stop by Muse Brews at the Newaukee Night Market on Wednesday, Sept. 11. for a sample. And follow Muse Brews on Facebook.

Grab tickets for the Shamrock Shuffle