Some details of the plan for the new development in the trio of National Ace Hardware buildings on 4th and McKinley have emerged, right as plans for a new arena and entertainment district across the street have taken steps forward.

Some details of the plan for the new development in the trio of National Ace Hardware buildings on 4th and McKinley have emerged, right as plans for a new arena and entertainment district across the street have taken steps forward.

On Tuesday, the Wisconsin Assembly passed an arena financing package which now moves to the desk of Gov. Scott Walker for his signature.

The new owners say they're planning a complete overhaul of the three buildings in the complex that will retain and restore the structures' historic character while transforming them into high-quality contemporary office and commercial space.

The development – called Hardware Headquarters in a nod to National Ace, which has occupied the buildings since 1987 – will include retail space and a street-level bar and restaurant, and offices on the upper floors and in the former Engine Co. 2 firehouse.

Phelan and Williams say their plans also also include corporate theater space, a lobby with the feel of a boutique-hotel – with a bar and lounge – a year-round biergarten, shared conference rooms and fitness areas, among other amenities.

Though the buildings won't be altered much on the outside – other than restoration work – Phelan says a connector will be erected between the second and third floors of the firehouse and the main building on the south end.

"Our inspiration for the Hardware Headquarters is found in San Francisco and other markets where new work space environments are being created that are predicated on the creation of a community within the building," Phelan said in a statement.

"The community brings creative companies from different industries under one roof, where they engage and collaborate with one another in a less formal way. The amenities are meant to engage those within Hardware HQ, as well as those outside the building. We are targeting local Milwaukee companies who share a vision for the city, creative energy and a desire to be located in a building that provides more than just office space." 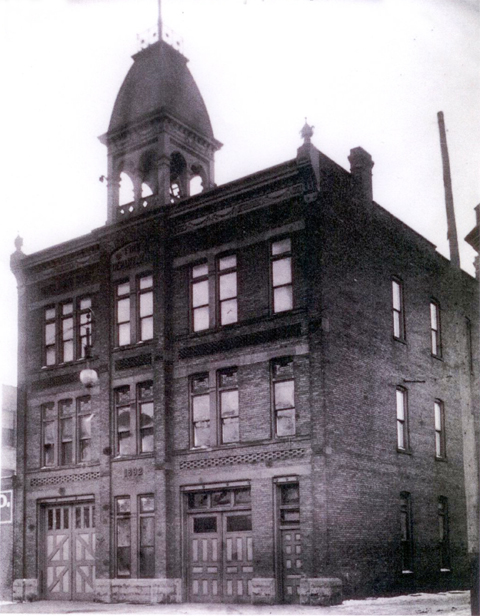 The buildings were constructed over the course of about 20 years.

"The National Ace Hardware building is iconic," Williams said. "It anchors the Park East corridor, and will tie the exciting re-development of that corridor to the neighborhood to the north.

"We think that the building enjoys the best transit connections in the city, and that it is ground zero for the creation of what we believe will become Milwaukee’s most compelling Downtown neighborhood," said Williams.

There’s more on this building – and its erstwhile 55-foot tower – here. 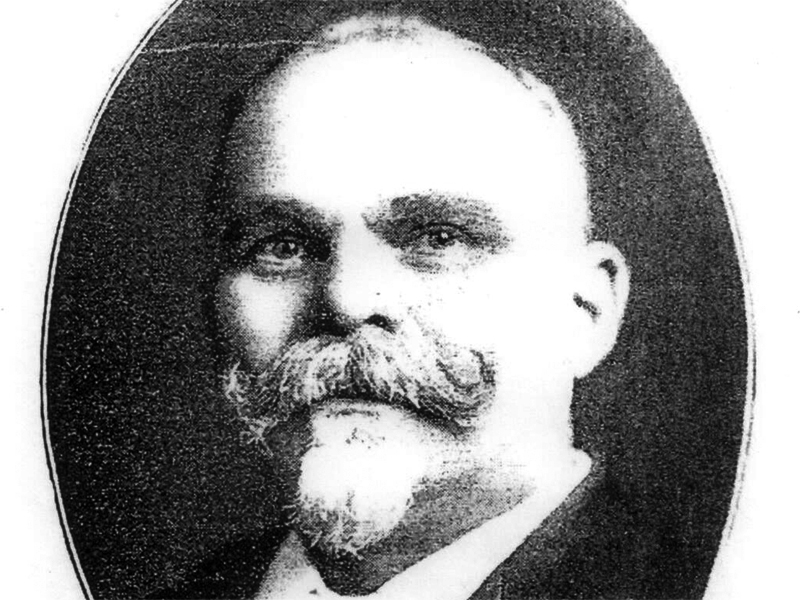 The 60,000-square foot building at the south end of the trio was designed by architect J.B. Conrad and put up in 1902 for carriage maker Charles Abresch (pictured above), which explains the enormous vehicle and freight elevator that still exists – and still works, though it’s rarely used – in the building.

The elevator is operated by a hydraulic system (pictured below) that transfers water between two giant tanks to raise and lower the car. 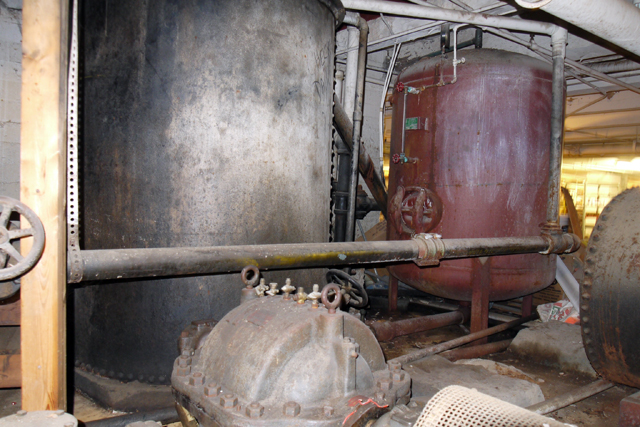 In the basement is a gargantuan boiler – as tall as at least two men – made by the Milwaukee Boiler Co. in 1910, that National Ace Hardware owners have lovingly dubbed "Baby."

Built initially as a coal-burning boiler – it’s since been converted to gas – it is reportedly the largest operating boiler in the county and third oldest in the state. It has the capacity to heat 50 homes. It is still in service heating the building.

Abresch – who owned a number of buildings near the intersection of 4th and McKinley – built his first structure there in 1872. Carriages were assembled across the street and the surviving building served as a storefront showroom and warehouse.

Newspapers of the day reported that Abresch shipped wagons pretty much everywhere, including six beer wagons shipped to Australia in 1891 and eight carts and wagons destined for Manila. 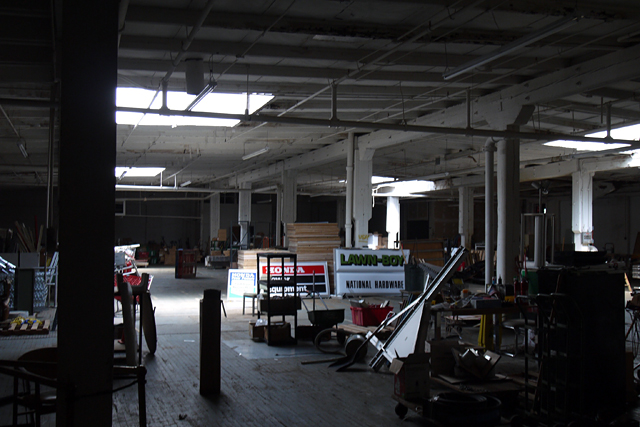 An 1890 Waukesha Journal article mentioned a pair of wagons that Abresch built for the Silurian Spring Co., calling them, "the handsomest ever seen here, being manufactured by Charles Abresch of Milwaukee, whose reputation in this line is world wide."

Much of Abresch's complex was destroyed by fire in 1898, but he was quick to rebuild. Flames raced through the Abresch buildings again in 1900 (and again in 1902) and it's possible that the National Ace building was part of that rebuilding effort.

As the transportation landscape changed, Abresch adapted his business, building car bodies and repairing and painting automobiles and motorcycles. It later had a partnership building sidecars for Harley-Davidson. Abresch also began building firefighting equipment in 1911.

In 1910 – though his company continued to operate in Milwaukee – Abresch sold the existing building to Charles Stehling, whose business designed and manufactured equipment for the tanning industry. 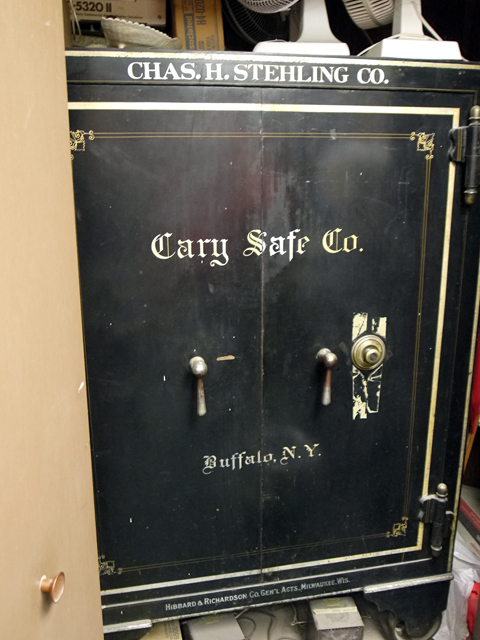 Abresch ceased manufacturing when it lost its contract with Harley-Davidson in the mid-1960s and focused solely on auto body work in the Haymarket neighborhood location that is now home to Bennett Coachworks.

Meanwhile, Stehling erected the one-story skylit building that connects the firehouse and the 1902 building in 1910, and it is, for some reason, the most rumor-laden building in the complex.

Some say it was a stable for the firehouse, which wouldn’t make much sense, since it was built by Stehling, not the fire department. Others say it housed horses for brewery wagons, but no one really seems to know for sure. The 1910 Milwaukee Sanborn map shows the structure and describes its use as "general storage." 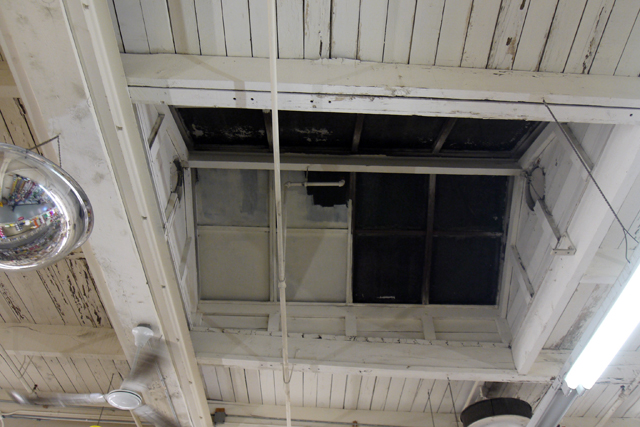 All three buildings were sold to rubber and plastic products distributor A.J. Brielmaier in 1976. The Rotter family purchased them in 1986 and opened National Ace Hardware the following year.

You can read more about the history of National Ace Hardware here.

"We first started working with Blair Williams on this transaction late last year," said David Rotter. "His vision for the building, and for the Park East, has been a perfect fit with our hopes for this building and neighborhood. Just as our family has worked to serve Milwaukee for the past 65 years, we believe WiRED and Phelan will create a new community to serve Milwaukee for the next 65." 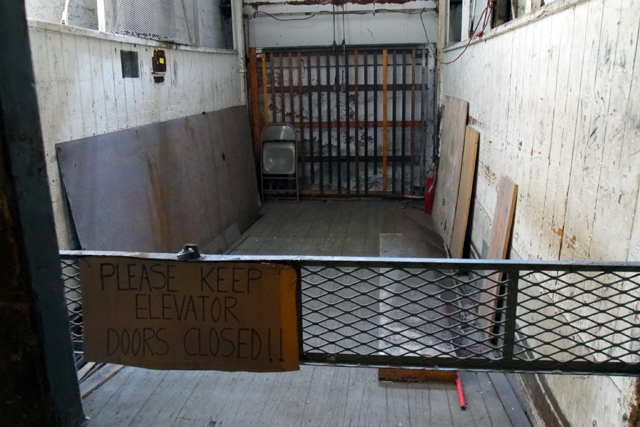 Williams says office suites will vary from as few as 1,000 square feet to as much as 14,500 square feet. The building also includes a loading dock and that freight elevator (pictured above).

Construction on the project is expected to begin in autumn and to be tenant-ready by next spring.