Better or worse than last year? Small forward or power forward? Stay in school or enter the NBA Draft? With Nigel Hayes participating in this week's Draft Combine, we asked a professional scout what he thinks of it all.

Of the four intriguing players with Wisconsin connections that are participating in this week's NBA Draft Combine, it’s the Badger from out of state who is arguably the intriguing-est and the one who stands to learn the most about his uncertain professional prospects.

Nigel Hayes did not have the kind of season he hoped for in 2015-16. Though he averaged team highs of 15.7 points and 3.0 assists, the Toledo, Ohio, native shot just 36.8 percent, including 29.3 percent on three-pointers. Those shooting percentages were down from 49.7 and 39.6, respectively, the year before, when Hayes was the beneficiary of open looks created by future first-round picks Frank Kaminsky and Sam Dekker, plus other talented teammates. Hayes stated as much in a recent Wisconsin State Journal story.

"Playing on the court with (Kaminsky and Dekker), as well as being surrounded by the other shooters on the court, I was able to have wide-open 3s," Hayes said. "I don’t think I dribbled and shot any 3s (as a sophomore). It was easier – my feet were always set square to the basket because (the pass) was coming from the double team. They were just easier 3s. This year, I had to manufacture more of them off the dribble, take tougher ones, late shot-clock ones."

But the smart, smiling, sesquipedalian junior forward helped Wisconsin reach the Sweet 16 in the NCAA Tournament and, though his statistics may not have screamed elite player, some scouts nevertheless were impressed by how he took on his expanded role. As the go-to option on a team without much offensive firepower, Hayes shouldered a heavier load – he played 36.2 minutes a game – and had to take more difficult shots. As the vocal leader of the team, it was his emotional exhortation of his teammates’ lagging effort after a Jan. 12 loss to Northwestern that spurred the Badgers to win their next seven games.

During that stretch, Hayes averaged 20.4 points on 44.1 percent shooting, including 40 percent on threes. Throughout the season, he showed an increased ability – and instinct – to take defenders one-on-one, drive to the basket and either finish or draw a foul. He led the Big Ten in free throw attempts (244) and was second in makes (181), displaying an aggressiveness that was less evident the previous season and appeals to NBA teams.

One NBA executive, who has more than 20 years of experience in personnel evaluation and saw Hayes play multiple times last season, said he still liked the Badgers’ forward, one of 63 prospects taking part in the Draft Combine running from Wednesday through Sunday.

"I thought he got much better this year, basically being the man at Wisconsin," said the executive, who requested to remain anonymous. "He really improved his game, especially facing the basket, which is where he needed to become a better and more proficient player, and he has."

The main question mark for Hayes is what position will he play in the pros? Standing between 6-foot-7 and 6-foot-8 and weighing about 235 pounds, Hayes’ height and game put him in a sort of NBA no-man’s land. Too short to regularly play power forward – though positions are becoming less defined, and some have pointed to Draymond Green as a Hayes comparison – he didn’t prove he could shoot well enough from the outside to be a small forward and, by his own admission, is not "an exception athlete," which would also limit his effectiveness on the wing. He averaged 5.8 rebounds per game last season.

"The thing with him, which Chicago will be very good for, is to see where his actual position is going to be," the executive said. "I think more importantly with him is teams trying to find out where they’re going to play him. Right now, you just see him as a forward, whether a small forward or power forward." 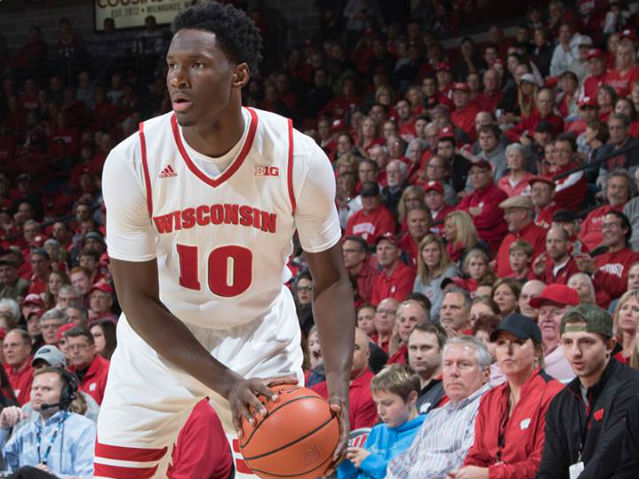 Unlike some surefire first-round picks, like Marquette’s Henry Ellenson (Rice Lake) and Maryland’s Diamond Stone (Whitefish Bay Dominican) – two prep stars from Wisconsin – Hayes did not leave school after the basketball season to train and prepare for the draft. In fact, he reportedly finished a final exam in Madison on Tuesday morning, hours before beginning the combine process in Chicago.

Over the next several days, Hayes will be measured and interviewed, he’ll meet with fans and the media, and he’ll participate in workouts, drills and games, competing against his peers and trying to determine his NBA outlook. If he performs well, he could push himself into the first-round conversation and declare for the draft; if he struggles, he can withdraw and keep his collegiate eligibility.

At least one scout thought returning to Wisconsin for another year would ultimately be in Hayes’ best interests.

"I will say that I hope (Hayes) goes back to school because I think he’ll get drafted much higher next year if he stays," the executive said. "And that’s assuming whatever names are coming out next year; I’m not really concerned about that because I think if he can develop another year and be in a position where he can be more facing the basket and do those (attacking) things, it’ll suit him next year in the draft better than this year."

So, to recap: He improved from last year, doesn't really have a position and should return to school for his senior season.

Besides Hayes, Ellenson and Stone, Oregon swingman Elgin Cook (Milwaukee Hamilton) is the fourth player with a state connection at the combine. Cook (6-6, 205 pounds), a 23-year-old redshirt senior who averaged 14.8 points, on 47.2 percent shooting, and 5.1 rebounds, will have to showcase his versatility and athleticism – and maybe a three-point shot – to even work his way into second-round consideration.

Meanwhile, a couple of other Wisconsin products, Iowa State power forward Jameel McKay (Milwaukee Pulaski) and Green Bay point guard Carrington Love (Milwaukee Pius), were not invited to the combine. According to the league executive, neither senior is really in the draft conversation but both could find a way into the NBA as developmental projects.

Of McKay (6-9, 215), who averaged 11.1 points and 8.8 rebounds last season, he said, "Maybe in the second round. Even if he did (get drafted), I would say the D-League is where he’s going to end up. He’s got to get stronger. He must develop a perimeter jump shot, some kind of jump shot, and he really doesn’t have – he’s got a little bit of a jump hook in the post, but he’s more of a runner-dunker guy. He’s got to develop more of an offensive game, especially facing the basket, and be able to make a midrange jump shot.

Of Love (6-1, 171), who averaged 17.3 points and 3.6 assists last season, the scout said, "No. I mean, he had a really good college career, there’s no doubt about it. Right now, I can tell you that I haven’t heard his name much, as far as the media or people in the industry. Hopefully he’ll get some workouts and maybe get an opportunity to show himself to some teams or whatever. But as far as right now, he’d have to be a guy that would go through the D-League, even if some team surprisingly did take him in the second round."

Do you think Hayes could be drafted? Should he return to school? Which player with Wisconsin connections are you most excited about as a potential pro? Let us know in the comments!