If it's been a while since you considered Saz's Statehouse for brunch, it's time to revisit this Milwaukee standard. After all, it has traded its traditional buffet for a lively chef-driven menu. Read all about it.

If it’s been a while since you considered Saz’s Statehouse, 5539 W. State St., for brunch, it’s time to revisit this Milwaukee standard.

The restaurant, which formerly offered an unchanging brunch buffet, has transitioned to full-service brunch featuring an inventive chef-driven menu that runs the gamut from breakfast standards like steak and eggs to more unique dishes like house-smoked pastrami hash. Better yet, Saz’s has extended its brunch service hours to Saturday and Sunday from 10 a.m. to 2 p.m.

The new menu was a collaboration between Chef Lindsay Discher and General Manager Jason Cornelius. Their explicit goal was to up Saz's brunch game.

"The thought process was really to make the shift to a nicer menu with an emphasis on comfort food," notes Discher. "We’re not fine dining, and we never will be. But we put in a lot of effort to create a menu that offers people a lot of delicious, comforting options."

Cornelius, who also created a number of new brunch cocktails for the menu, says the goal was to push the boundaries in terms of what people expect from Saz’s.

"We were tasked with creating a ‘wow’ factor with the brunch menu," he says. "We wanted it to match some of the changes we’ve made to our regular menu, really boosting the flavor profiles on some items and adding some additions that really speak to a slightly elevated experience." 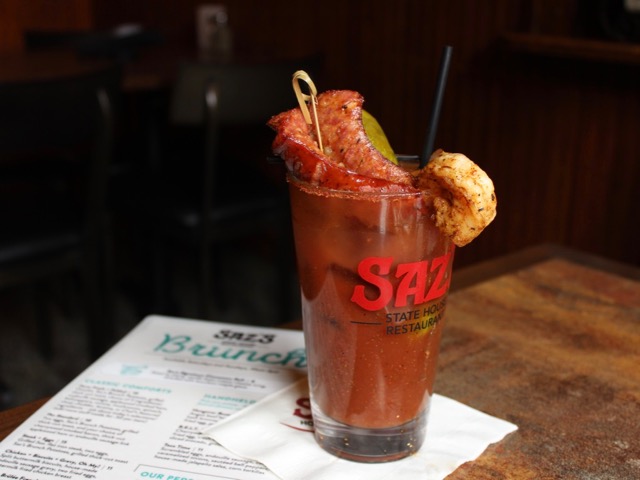 Brunch is a leisurely affair, and Saz’s makes it easy to relax and enjoy an hour or two with friends or family.

Settle in with a housemade Bloody Mary (there are four options including basic, BBQ, spicy Hellfire and the Cajun, pictured above, which is garnished with grilled andouille and shrimp ($7.25-$12). Try a classic mimosa, or venture out to enjoy a Mango’sa made with orange juice and mango puree; or a summery take like the watermelon cooler featuring cucumber vodka, watermelon puree and cava ($5-$8).

While you’re perusing the menu, it behooves you to order something for nibbling. I’d recommend the signature 10-ounce cinnamon roll, featuring cream cheese icing and bourbon maple glaze ($8). It’s soft, warm, sweet and heavy on the cinnamon (as it should be); it’s also easily shareable for up to four people. 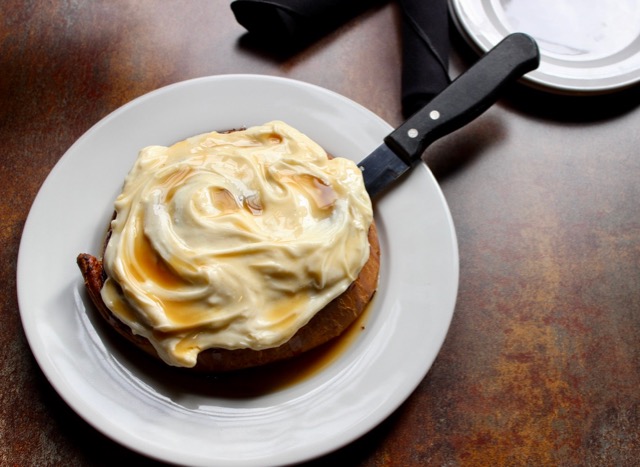 As for entrees, there are staples like a build-your-own omelette served with tasty brunch potatoes and toast ($10); The Standard featuring two eggs, potatoes, grilled toast and your choice of breakfast meats ($10); or housemade Belgian liege waffles (or pancakes or French toast) topped with berries, blackberry coulis and whipped cream ($12). 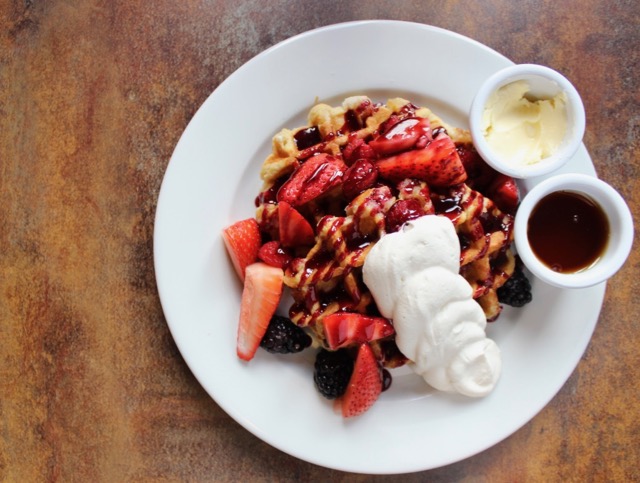 But you can also branch out and try something a bit more creative. Take the barbacoa skillet with beef barbacoa, fried eggs, blistered tomatoes, caramelized onions, bacon and jalapeno salsa served over brunch potatoes ($14). It's pictured with the watermelon cooler. 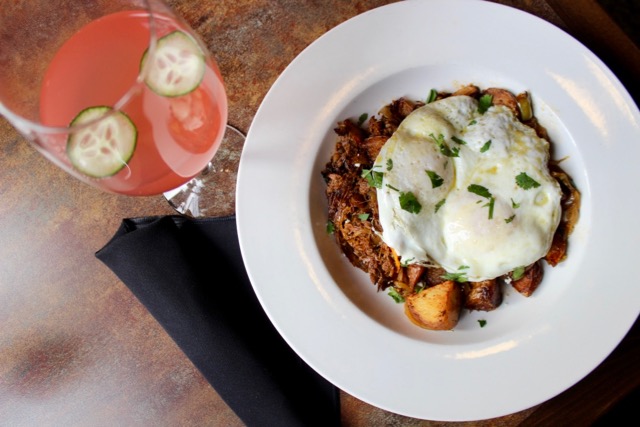 Or how about chicken and Belgian waffles kicked up a notch with Mike’s hot honey, bacon and house-pickled jalapeno peppers ($14)? 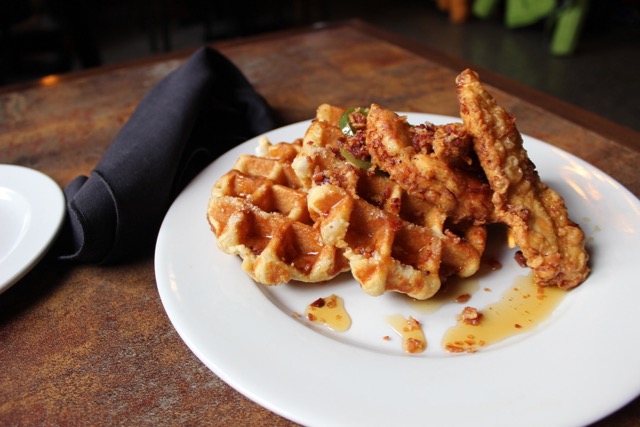 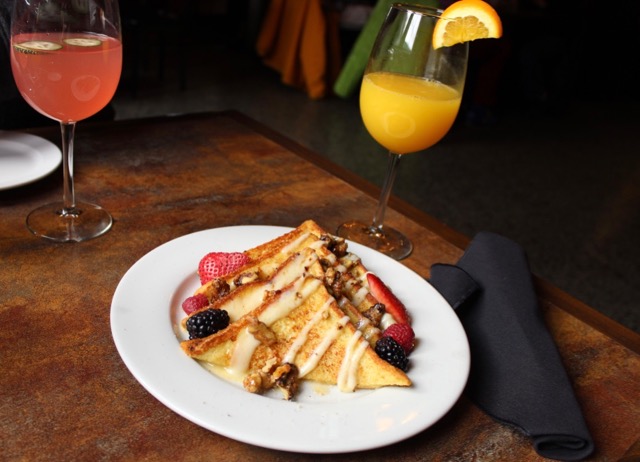 You can also choose from a traditional eggs Benedict ($11) or one of three more creative versions, including a Flat Iron steak benny ($15), andouille sausage and cheddar ($13) or the Crabby featuring a base of house-made crab cakes topped with steamed asparagus, poached eggs and a tasty bearnaise sauce that’s a refreshing change from the usual hollandaise ($15). 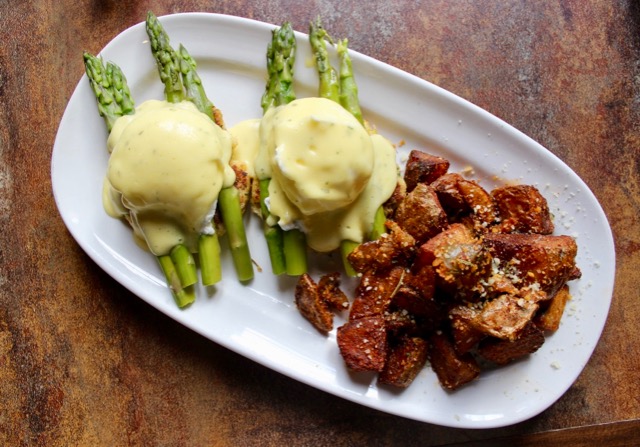 And yes, there's even a kids' menu. 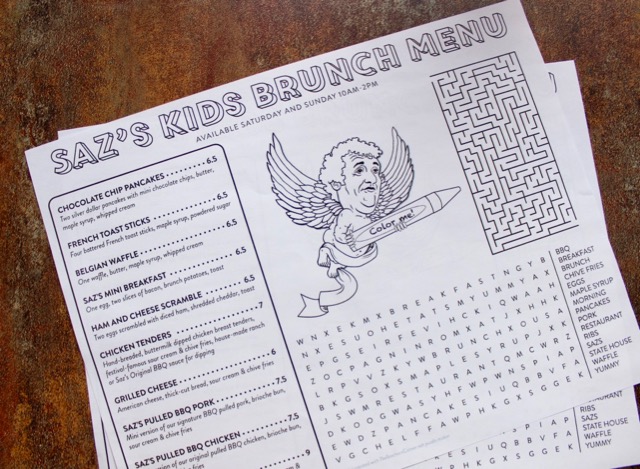 Saz’s serves brunch from 10 a.m. to 2 p.m. on both Saturdays and Sundays. Reservations are highly recommended.