Inside a ghost mall: Northridge sits quietly, unknown future ahead

We took an exclusive tour inside the empty old mall, where still-growing trees are its only sign of life.

If you grew up in Milwaukee or have lived here for some time, you certainly remember Northridge Mall.

The 800,000-square foot former shopping center on the corner of 76th St. and Brown Deer Road sits just 10 minutes from River Hills, one of Milwaukee's most affluent suburbs. Built by Herb Kohl and his partners, it opened in 1973, a virtual carbon copy of Southridge. And after a slow decline, it finally shut its doors 30 years later in 2003.

Even though a variety of factors contributed to Northridge's demise, the one many people remember was a murder with a racially motivated alibi: Jesse Anderson, who was white, brutally killed his wife in 1992 but claimed two black men attacked them while they dined at T.G.I. Friday's, next to the mall. It was the final nail in the coffin for many white suburban shoppers who decided that it was safer to travel the extra distance to Bayshore, Mayfair Mall or Brookfield Square.

Now, Northridge sits in an eerie stasis, shuttered but surprisingly well preserved. Purchased for $6 million by a Chinese investment group called the Toward Group at the end of 2009, it was to become a head-scratching "Chinese Mall of North America," dedicated to showcasing Far East retailers. 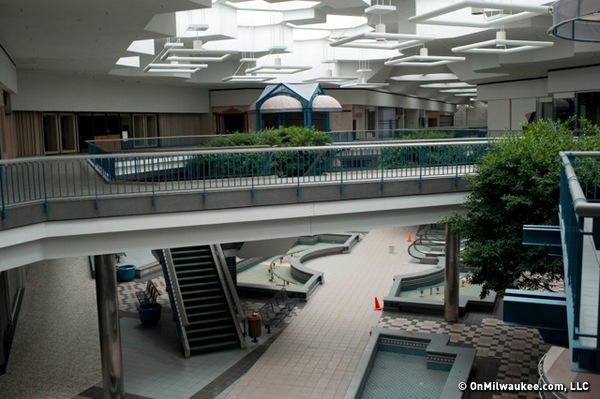 Not surprisingly, Milwaukee's plan for a Chinatown has not come to fruition.

On a recent trip to China, Milwaukee Mayor Tom Barrett met with Wu Li, the president of the Toward Group, who said he's still interested in developing the mall. And indeed, Toward's liaison, Yi Wan, the president of Y&Y International in Milwaukee, said Toward is continuing to consider its options.

"(Li) doesn't think it was a bad decision because he still wants to develop the property," said Wan. "He's still recruiting the companies from China, and he had some difficulties. That's the problem."

Wan said that Li has encountered challenges obtaining visas from Chinese retailers to visit Northridge and see, first-hand, what they'd be investing in.

Locally, some residents aren't waiting around.

The area's businesses held a brainstorming meeting in the old food court this fall to discuss their options, but unless Toward develops, razes or sells the property, Northridge looks like it's set to remain a ghost mall indefinitely.

As someone who grew up not far from Northridge, who remembers it during and after its hey day, I too wanted an opportunity to get one last look at this testament to the state of Milwaukee's contrasting retail landscape. Generously, the Granville-Brown Deer Chamber of Commerce arranged a private tour to take us inside.

From the outside, of course, Northridge looks like the perfect set for filming a zombie apocalypse movie. Grass grows through the cracks in the cement, and while property caretaker Jeff Myszewski – he worked at Northridge for some 20 years – trims the outdoor bushes annually, there's not much he can do about the vandalism and broken windows on the food court atrium.

Myszewski and Wan let us in through a temporary door outside the boarded-up food court, which was a 1988 addition to the mall. Our jaws dropped as we stepped back into time.

Amazingly, the mall is still mostly sealed tightly, and once we entered its interior, it looked even more like a zombie movie set – but before the undead had a chance to wreak their havoc.

You could hear a pin drop.

Inside, Northridge sits clean and well-lit by its spacious skylights. Even with power and heat shut off, the large trees in the center of the mall continue to grow, their roots planted deep into the ground. Almost all external storefront signs are removed, but it's remarkably preserved.

It really feels like someone turned off lights one day and shut the doors. If that person switched on the lights, the mall could instantly spring back to life.

Of course, that's a big if.

Oddly, the mall doesn't look especially dated, except for the mauve painted steel beams in the food court. Some 16 years after I bought a pager at the mall, presumably my last purchase at Northridge, it's actually hard to remember that we weren't standing in an empty Southridge. For the hundreds of times I visited Northridge as a kid, without any signs to orient myself, I found it difficult to remember it as the mall it once was.

But certain markers gave some indication of where we were. From the faded sign where the letters of Spencer's Gifts once shined, to a a poster outside Boston Store that showed the mall alive with flowers and shoppers, the glory days of Northridge started to re-emerge in my mind. I walked past the movie theater, where I saw "Max Dugan Returns."  Myszewski reminded me where the Gap and Farrell's once stood. I might've even seen the spot where I bought that pager in, yes, 1996.

The irony wasn't lost on me as I read a sign urging me to "Rediscover Northridge!"

It was like time stopped in 2003 and hasn't restarted, but Myszewski remembered all the storefronts when we quizzed him. I could tell how disgusted he was.

Myszewski said the mall's state disappoints him, and I understand why. "I've been coming here since I was a kid. It was a good building," he said. "Not that many years ago, you wouldn't be able to walking around here now, because it'd be jammed full of people."

Sadly, Northridge has seen a bit of vandalism lately. Some time ago, thieves posing as workers made off with some HVAC equipment on the roof, and more recently, vandals broke in to strip as much copper pipe from the walls as they could before being apprehended. Still, the mall remains pristine, except for the end where Sears used to be, which was lopped off to make room for the exterior wall of the neighboring Menards.

Note that I said earlier that the heat was off. This matters because until this winter, Myszewski was instructed to warm the building to 32 degrees. Thermometers have been placed along the walls with marker lines indicating the freezing line – and all were below. I asked Myszewski what will happen now that the mall is allowed to freeze. Presumably the pipes have been drained, but Myszewski said he's not sure how the veneer and building materials will react to frigid temperatures. I asked him what he thought would happen, and he just shrugged his shoulders.

Draw your own conclusions, but our group inferred that this token gesture of carelessness by the Chinese owners meant they have no intention of reopening the mall, Chinese style or otherwise. It became even more obvious to me that Northridge will never become a shopping center again.

Which, in a way, is a shame. This northwest corner of Milwaukee, leading into Brown Deer, appeals to a tremendous portion of the population, and it presents a viable, turn-key alternative to Bayshore and malls farther away. While that brainstorming meeting in the food court brought up several ideas: senior housing, corporate headquarters, a charter school, community recreation or mixed retail; Northridge sits like a preserved fossil, ready for its second life.

But that will never happen.

Before he left for his trip to China, Barrett told the Business Journal, "We are looking for some direction on where they are going to go with the property," Barrett said. "We're interested in having the area developed. If he isn't interested in developing it, maybe there's someone else out there who is."

But is suburban Milwaukee fundamentally ready for a racially or ethnically integrated shopping experience? Have mindsets changed enough about "white flight" since 1992, when one baseless allegation provided all the "evidence" shoppers needed to stop visiting the mall completely?

My guess is no. As Southridge grows and thrives and expands, its twin sister sits in neglect.

Empty, quiet and cold, its trees are the only sign of life inside Northridge Mall – a wasted opportunity and a metaphor for Milwaukee retail gone horribly wrong.

A look back into the long-vacant Northridge Mall