When we heard Oak + Oyster was hosting a new pop-up series, we knew we had to check it out. And check it out we did. We got a full preview of the cocktails and dishes it will serve for its inaugural Izakaya-themed Workshop pop-up.

Oak + Oyster, the oyster bar on the lower level of Third Coast Provisions, 724 N. Milwaukee St., has always felt a bit like a cozy little speak-easy.

It will feel even moreso beginning Monday, March 4 when the space will be transformed into a Japanese-inspired Izakaya, complete with lanterns, intimate red-hued lighting and a menu of creative cocktails and bar-worthy bites utilizing Japanese inspired techniques and ingredients. 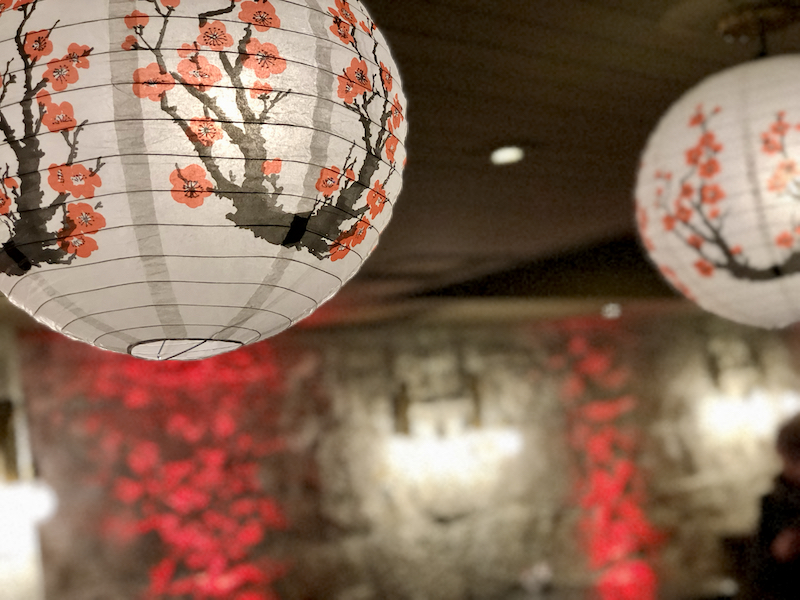 Izakaya is the first installment of The Workshop, a pop-up series created and hosted by the creative staff of Third Coast Provisions and sister restaurant Merriment Social.

"We have a really talented team," notes co-owner Samuel Emery. "There are so many nights when we’re sitting here at 2 a.m., drinking blue sodas and coming up with crazy fun ideas. And these pop-ups are really an outlet for collaboration, and the expression of that collective creativity."

The term izakaya literally means: "sitting in a sake shop." It's a word that refers to the Japanese equivalent of a pub or lounge: a low key spot to grab a drink and share a number of delicious shareable dishes. It's a place to sit back and relax with friends. And it’s a place for a bit of boisterous fun.

"The whole idea is essentially built around foods that are fun to eat while drinking," says Chef Andrew Miller. "And we’re inspired by traditional Japanese Izakaya in terms of ingredients and portion sizes. So there fried things, some aiolis, and some little comfort food bites." 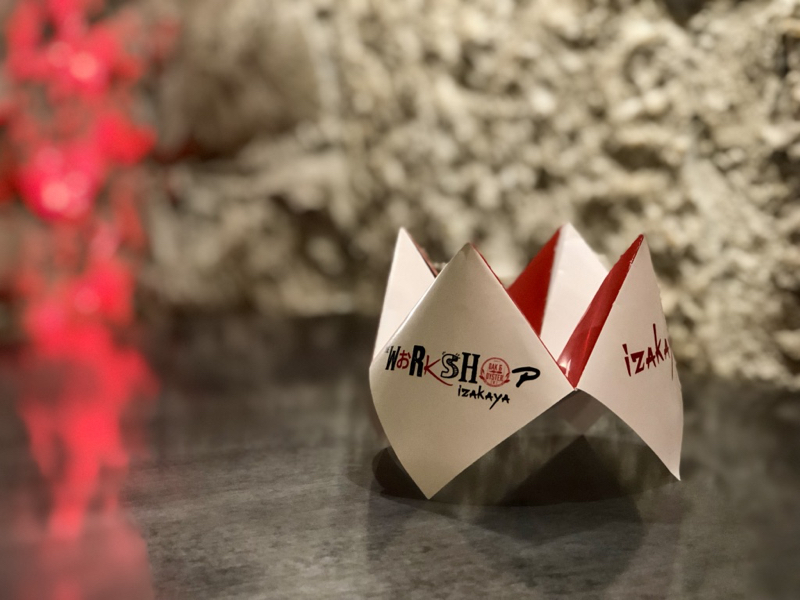 The experience begins with an origami cootie catcher (fortune teller) menu, designed by MIAD student and Merriment Social host Kasey Hurst. It’s a bit like playing a "choose your own adventure" game. Just pick one of the words on the exterior, opening and closing the menu once for each letter in the word. Then lift the inside flap to see which food or beverage is in your future.

It might be one of five different cocktails created by Bar Manager Joe Lowery, who says he had a great time playing around with esoteric ingredients like Calpico, a fermented dairy-based beverage with a uniquely fruity, fermented flavor. That’s used in the Soft Power, a whiskey based drink with a creamy mouthfeel and notes of vanilla and pandan leaf ($13). 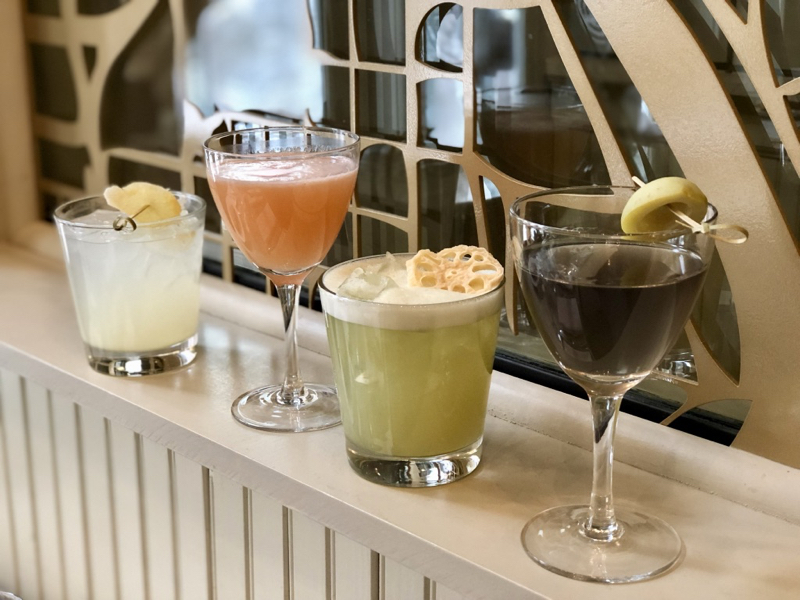 Fans of the dirty martini might find their bliss in a squid ink martini, which incorporates gin, sake, blanco sherry vermouth and a splash of squid ink for brininess ($13). It’s garnished with a beautifully salty plum mango in lieu of an olive.

Of course, there's absolutely nothing wrong with the Japanese whiskey Highball, a quintessential Izakaya-inspired drink that Lowery says is an adept expression of the sense of the order and perfectionism inherent to Japanese culture. "You can’t do Izakaya without a highball," he says. "It’s just two ingredients, but it’s precise and balanced."

And yes, there's a nice selection of sake, which is always a beautiful choice while noshing on salty Japanese bar fare.

Once you choose your drink, you’ll want to play the menu game again to determine what to eat first. It might be a snack like the smoked rock shrimp steamed bun featuring a filling of housemade smoked shrimp sausage, nori, slow-roasted tomatoes, puffed rice and Hatch chile kewpie mayo ($5). 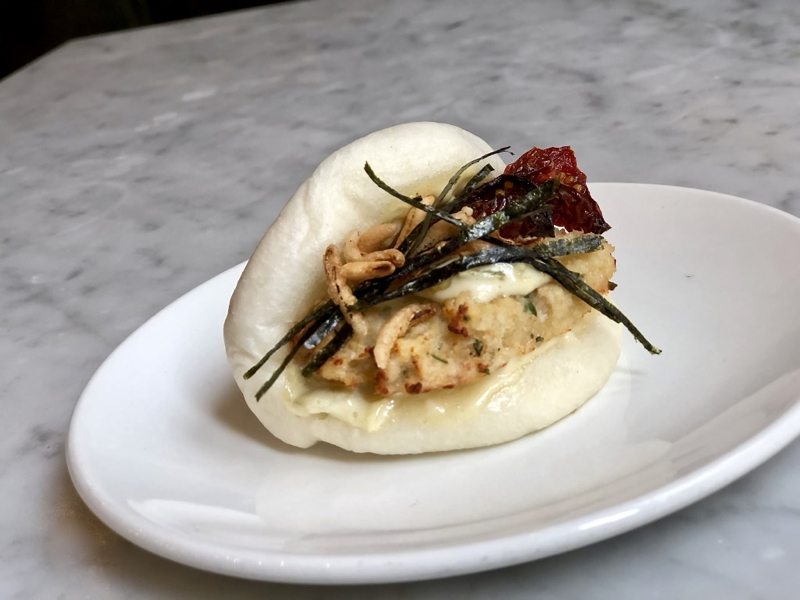 ... or maybe togarashi avocado toast, a beautiful play on the flavorful toasts Merriment Social has been serving for brunch. It features a base of pan con tomate topped with avocado, salty cured egg yolks, pickled spring onions and toasted sesame seeds ($5). 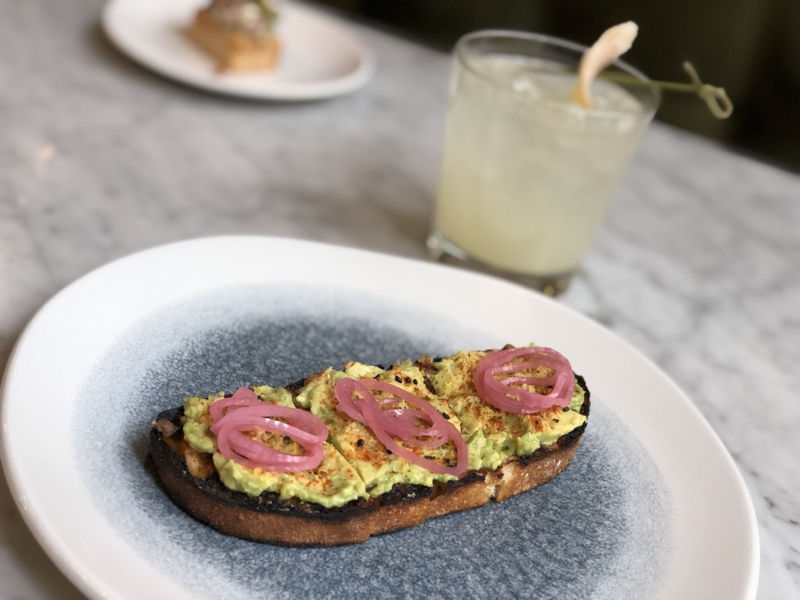 Be sure to get the tuna tartare crispy rice, a texture-filled play on a spicy tuna roll featuring cucumber, red onion, the insanely addicting condiment yuzu kosho and a topping of smoked whitefish chatchini (fluffy, finely shredded fish floss), $5. 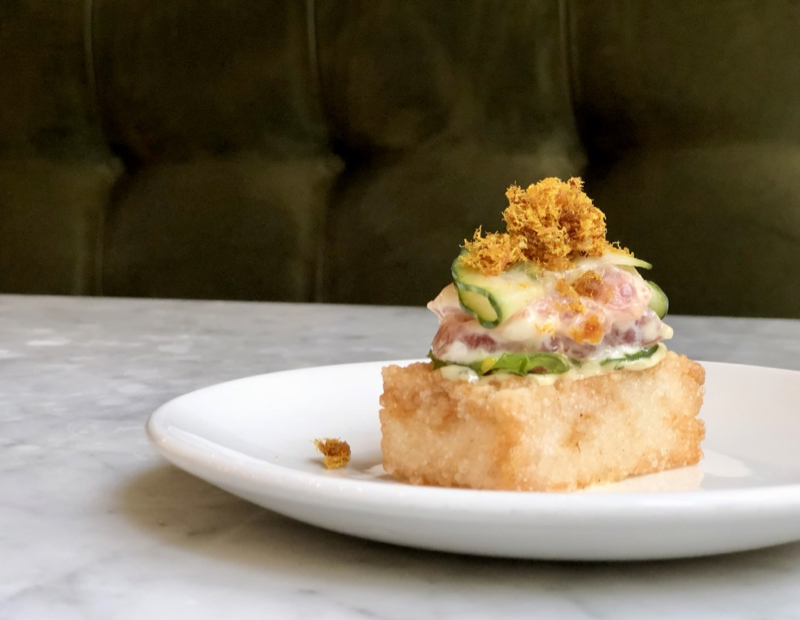 Truly hungry? More substantial items include a full himachi collar (the fattiest, juiciest part of the fish) which has been treated to the same technique used to make Merriment Social’s fried chicken: brined, battered and fried and served with a simple Asian salad and pickleback mayo ($12). 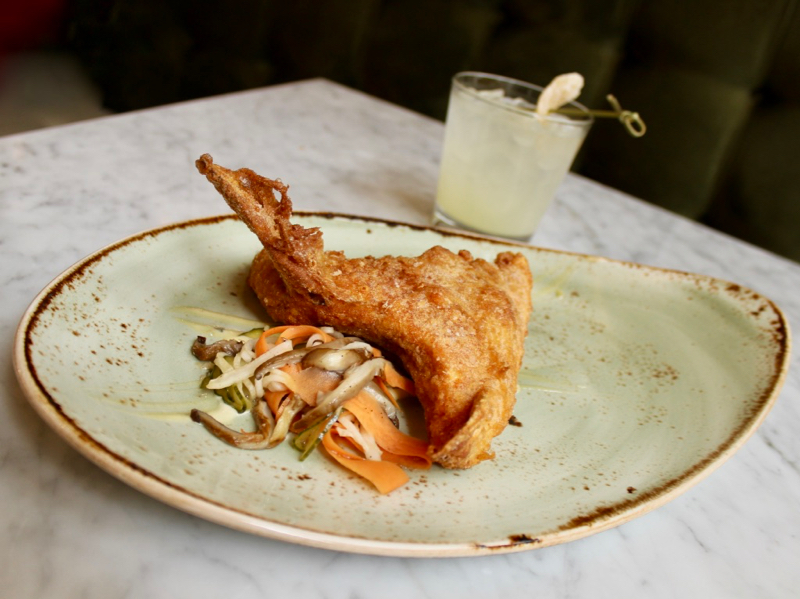 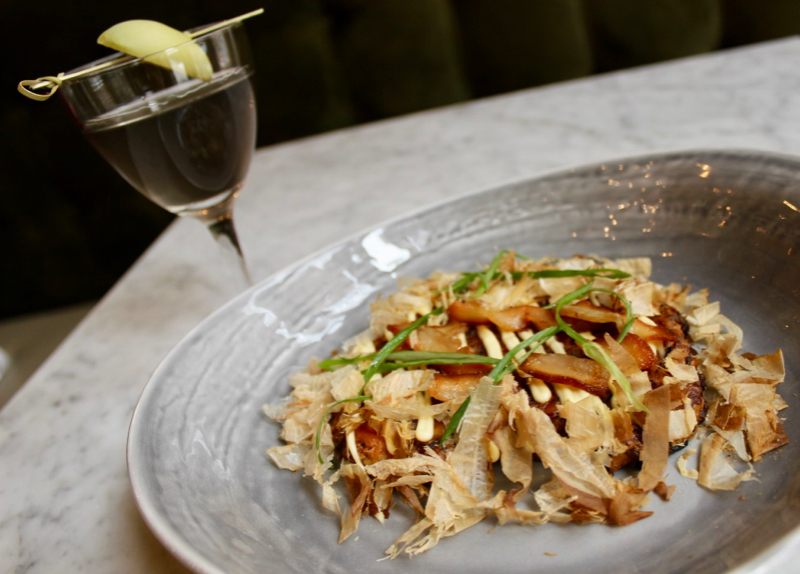 If you want to go traditional, there's always hangar steak yakitori, a traditional option for nibbling alongside a drink ($10) … probably that whiskey highball you haven’t tried yet. 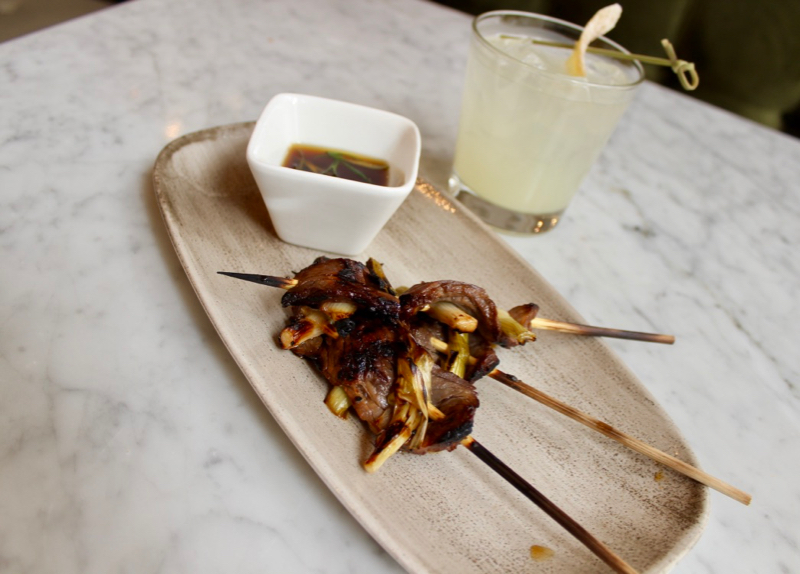 You can't go wrong with  the crispy chicken karaage (Japanese fried chicken). The bite-sized nuggets are ultra crispy and slightly sweet thanks to a drizzle of spicy sesame sauce. They're served with Thai basil aioli for dipping ($8). 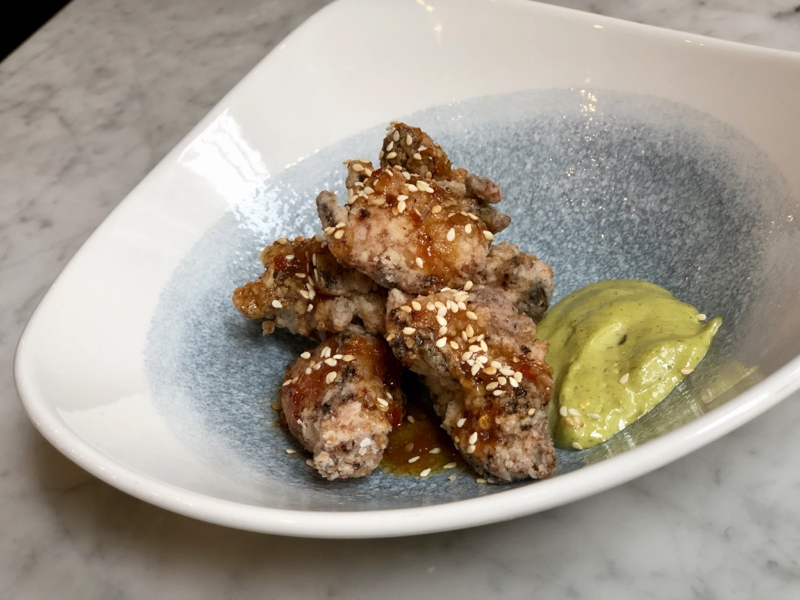 There’s also a po’boy … because it’s just not Oak + Oyster without a po’boy (even during a pop-up). This one’s a doozy. It captures all the flavors of ramen under one delicious house-made bun. Think ramen noodles marinated in seasonings and oven roasted, topped with slow-roasted miso pork belly, charred enoki mushrooms and soy eggs. It’s a big umami-bomb of a sandwich ($8). 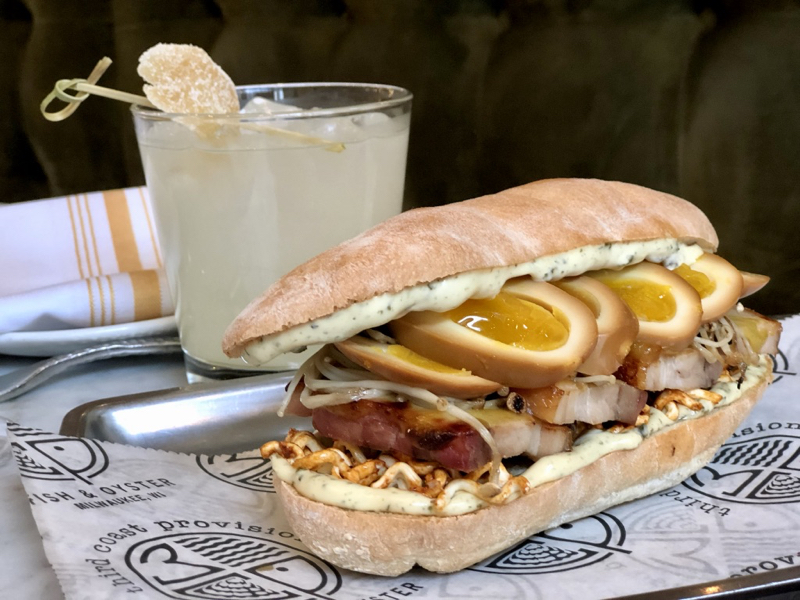 Izakaya is just the first of a variety of pop-up concepts planned for the Oak + Oyster space. In fact, the team is toying with numerous iterations from "after school snacks" to "fast food" and retro Christkindlmarket themes, each of which will be kept under wraps until just before their launch.

What we do know is that some pop-ups will feature guest chef collaborations; others will showcase ideas conceived and created by Merriment and Third Coast Provisions staff. And every single one will last approximately two months, will feature its own unique decor with food and drink to match. In fact, an upcoming pop-up might just feature boozy gushers, an adult take on the popular candy from the '90s.

But for now, it’s time to revel in the deliciousness of Izakaya. After all, it’s only here on limited engagement.

Lori Fredrich Jun 09 Dining
Do This

Lori Fredrich Jun 09 Dining
Do This