What's ooey gooey and especially delicious in the middle of winter? Raclette, that's what. And beginning this weekend, the West Allis Cheese Shoppe Cafe launched three raclette dishes, served up with all the classic theater for which the Swiss dishes are known.

What’s ooey gooey and especially delicious in the middle of winter? Raclette, that’s what.

Pronounced rah-KLEHT, raclette is a word derived from French, which means "to scrape." It’s a reference to two things: 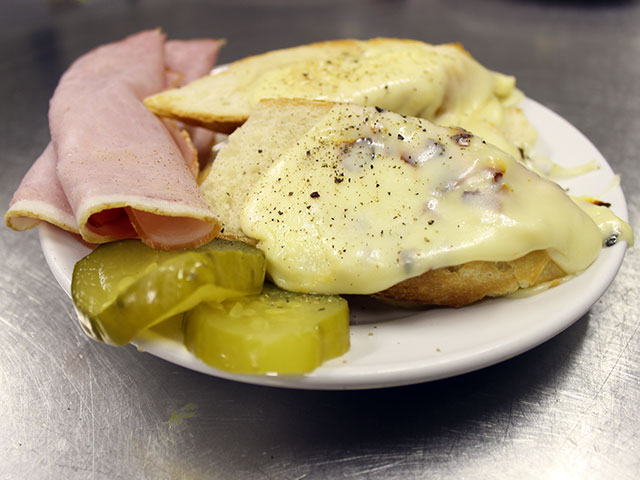 The good news is, both the former and the latter can be found at the West Allis Cheese & Sausage Shoppe and Cafe, a tasty little spot that’s making a name for itself with its tasty breakfast, brunch and lunch dishes.

Beginning this past weekend, the West Allis Cheese Shoppe Cafe launched three new raclette dishes: raclette with oven potatoes, asparagus and pickles ($10.99), raclette served on toasted French baguette with pickles ($7.99; add ham or prosciutto for $2/3) and smoked Polish sausage on a bun smothered with… you guessed it… raclette ($10.99), served with a side of pickles.

And you gotta see it to believe it.

Each dish is prepared using a traditional raclette grill, which holds a half round of raclette cheese. The cheese, which is secured on a platform, swings underneath a heating element which melts and softens the cheese enough that it can be scraped atop the dishes using a special flat raclette knife.

All three dishes will be available Saturdays and Sundays from 11 a.m. to 2 p.m., and will be served up from a cart in the dining room where diners can enjoy the theater of the raclette melting process, along with the spoils.

"We’re always trying to think of new things we can offer," notes West Allis Cheese & Sausage Shoppe owner Mark Lutz. "We’ve carried raclette for a long time in the shop, and it’s a good seller around the holidays. So, we thought it was a good time to highlight it in the cafe."

Moving forward, Lutz says he hopes to roll out similar dishes at the West Allis Cheese & Sausage Shoppe in the Milwaukee Public Market.