Putting a hot meal on the table is getting easier and easier, thanks to myriad options for home delivery services. And local business owner Alan Harris of Urban Caveman and FreshPacks, has reenergized his business thanks to a merger with Origin Meals.

Putting a hot meal on the table is getting easier and easier, thanks to myriad options for home delivery services.

One of the most quickly growing segments in the delivery industry is curated prepared food delivery, a model through which consumers can purchase prepared meals that need little more than a zap in the microwave or oven to be ready to consume.

And few have seen and experienced the growth more intimately than Alan Harris, founder of the Urban Caveman food truck and FreshPacks meal delivery, who sold his business this fall, after reaching a merger agreement with Minneapolis-based Origin Meals.

"The growth of the delivery market is astronomical," he says. "Beyond the very traditional takeout model, the idea of mail order food service didn’t even exist a few years ago."

Harris, who founded his food truck in 2013, quickly found that there was a market for gluten-free meals that are made from fresh, fresh, minimally processed high quality ingredients. In response, he launched a meal delivery service called FreshPacks, with convenient pick-up locations across the city.

By 2015, demand for the product was so great that Harris says he transitioned the business to focus solely on FreshPack meals. At that point, Harries entered into an agreement with Steve Perlstein and Jennifer Block of Simmer to produce FreshPacks in their restaurant and commissary kitchen.

Unfortunately, at the end of 2015, Simmer made the decision to close its doors, leaving Harris to search for a new commissary in which to produce his meals.

"It was a turning point for the business," says Harris, who says one of the biggest challenges was retooling operations and production to fit the availability at the new kitchen space.

Allen says the business met with success during the transition, but, within months, faced new challenges.

"By the time spring rolled around, we were running into capacity issues in terms of personnel and kitchen space," he says. "So we knew we needed to partner with someone or make an investment in a place of our own so that we had dedicated production space."

Fortuitously, Tyler Carlson of Origin Meals in Minneapolis, had reached out to Harris with an offer to purchase the business and roll it up under the Origin Meals Brand.

"He’d reached out before, but by summer it made sense to revisit the conversation," says Harris, who made the decision to sell the Urban Caveman FreshPacks business to Carlson, while remaining on board with Chef John Okruhlica to oversee operations in the Wisconsin market. 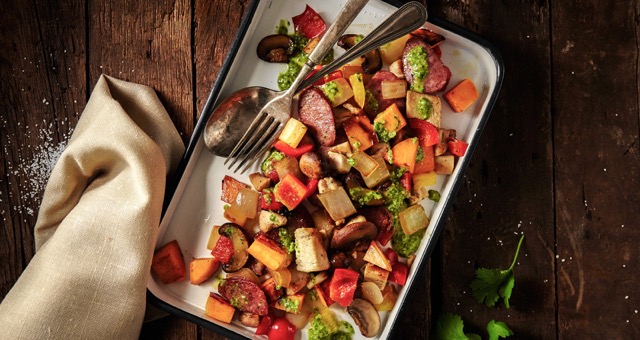 Harris says the decision, which took effect Oct. 1, was the best course of action for his small business.

"There was a very strong alignment in our core values including quality of the product and sourcing standards," he says. "There was also alignment in terms of being customer-centric and adhering to standards with regard to treatment of employees. And, on a personal level, I’d been carrying a real load in terms of running my own business. I hadn’t even started paying myself until the third year. We started a family in 2015, and I really wanted a bit of certainty in our lives. And so it seemed like a good time to consider a different model."

Origin Meals offers two-, three- and five-day meal plans, including options for breakfast, lunch and dinner. Seasonal menus, which change quarterly, accommodate customers who observe a strict paleo lifestyle,those who choose to eat some gluten-free grains and even vegetarian diners.

Harris says that, although he had no idea initially how his current customers would react to the transition, he felt confident that they could continue to offer them a premium product.

"In my mind, we were selling the business," he says. "But, we weren’t selling out. It was an opportunity to achieve a higher level of quality and consistency. But, in some ways it was kind of a gamble."

Harris says the response has been overwhelmingly positive. Business has doubled in the past few months. And, thanks to dedicated refrigeration at drop-off locations, as well as the option for home delivery, customers are getting a better, more convenient product. And expansion to markets in Madison and the Fox Valley is currently in process.

"It’s been a really great move," he says. "And I’m excited for what the future holds."