With a small-batch craft brewery, gastropub-style restaurant and outdoor beer garden, which effectively blend its historic and contemporary elements, the new Pabst Milwaukee Brewery appeals to both the wistful reminiscents and move-Milwaukee-forward types. Here's a look inside.

A little more than two decades ago, Pabst Brewing Company closed its Milwaukee operations, ending in 1996 a 152-year-old relationship with the city that had grown less mutually beneficial since the days when being the nation’s beer capital carried significant economic weight.

But on Wednesday, Pabst officially reopened its historic Milwaukee brewery, celebrating the event with a firkin keg tapping, blue ribbon-cutting ceremony and dinner party that involved some of the most influential figures in both the city and the company, who announced the occasion in terms of great consequence.

Mayor Tom Barrett, County Executive Chris Abele, Pabst chairman Eugene Kashper and CEO Simon Thorpe spoke sentimentally and optimistically about what the company’s comeback could mean for Milwaukee, which has seen plenty of craft breweries pop up in recent years – though none with Pabst’s brand import or local association – and is experiencing something of a Downtown revitalization.

Kashper and Thorpe said 2017 marked a new chapter for Pabst and renewed a strong relationship with the community here; Barrett and Abele talked about the brewery’s rebirth coinciding with, and aiding, the city’s increasing development, especially in the Bucks arena-led boom of Westown. They all mentioned the deep history between Pabst and Milwaukee – as Abele said, "When this brewery was at its height, this city was at its height" – but stressed that the focus was on the future.

Time will tell if the grand civic expectations of the company’s beer-making return are met, and if the nostalgic connection even remains relevant, but Wednesday night the Pabst Milwaukee Brewery put on one hell of a party. After cutting the ribbon, tapping the keg and sampling the beers – a list that extended far and deliciously beyond PBR, which, thankfully, wasn't even offered – invited guests got a taste of the cool new space, which is an old church on the former Pabst complex.

With a small-batch craft brewery, gastropub-style restaurant and outdoor beer garden, which effectively blend its historic and contemporary elements, the new Pabst establishment appeals to both the wistful reminiscents and move-Milwaukee-forward types. Read more about Pabst coming home here.

The brewery opens to the public tomorrow, on Milwaukee Day (April 14), and Abele rightly commemorated it Wednesday night with the city’s new toast – "414, Let's Have One More!"

There will be a street festival May 13 at the site, where attendees can party like its 1844, and a grand opening celebration Friday at 11 a.m., but here’s a first look inside the new Pabst Milwaukee Brewery. 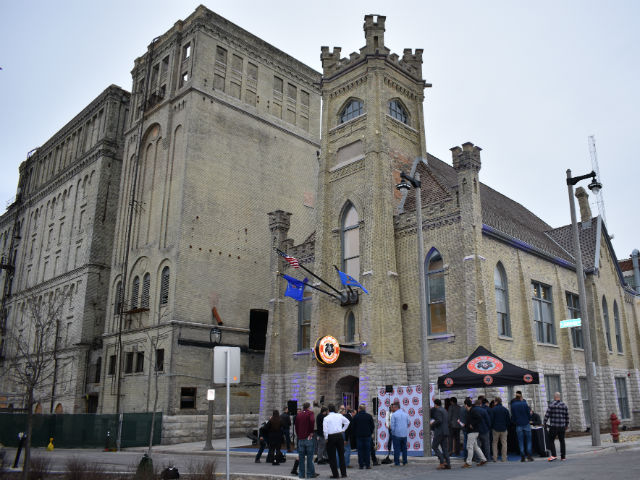 2. The original building is a a 144-year-old former church 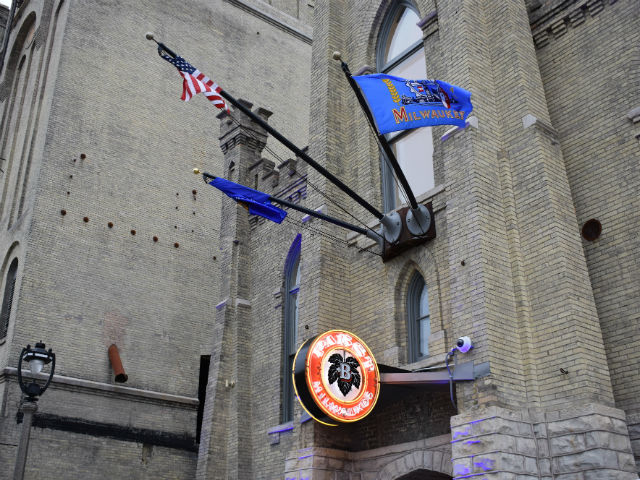 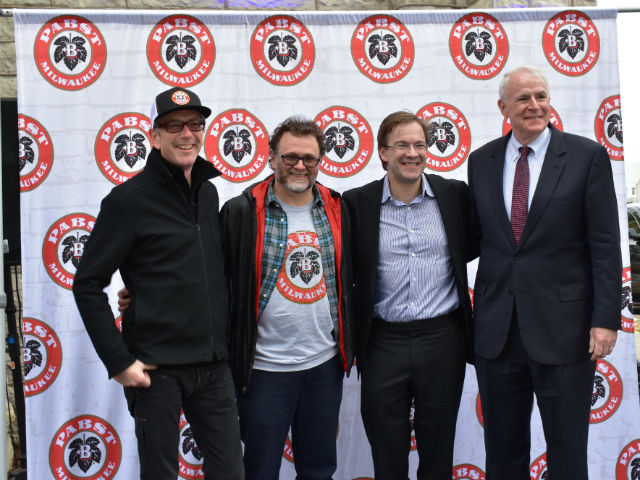 4. And with that, the brewery was opened! 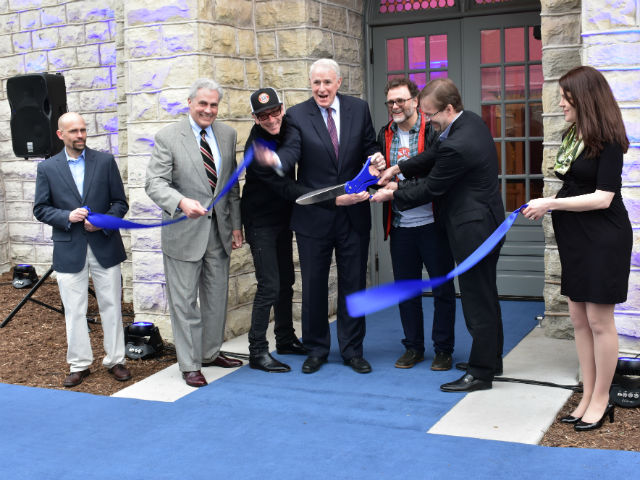 5. And with this, the beer started flowing! 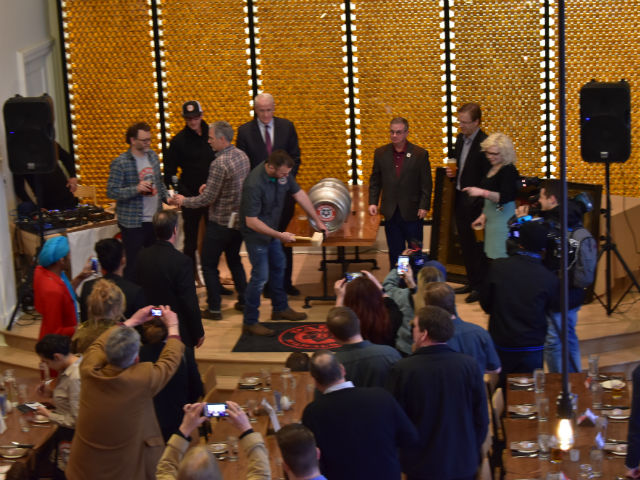 6. The brewery space has a stage for live music and events (the back wall is made of beer bottles) 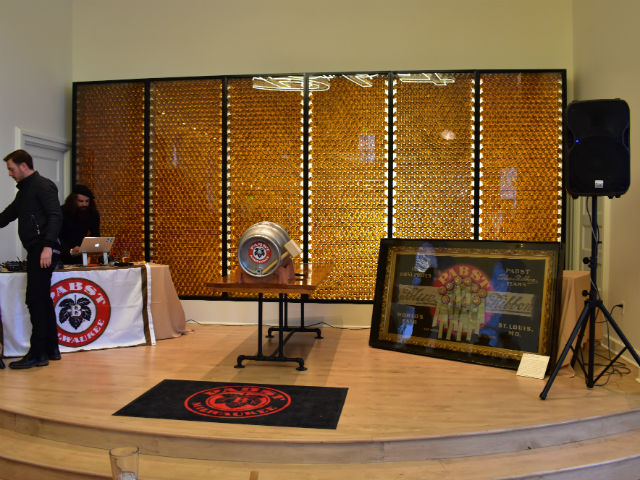 7. Pabst is proud of its history and shows off a lot of it in Milwaukee 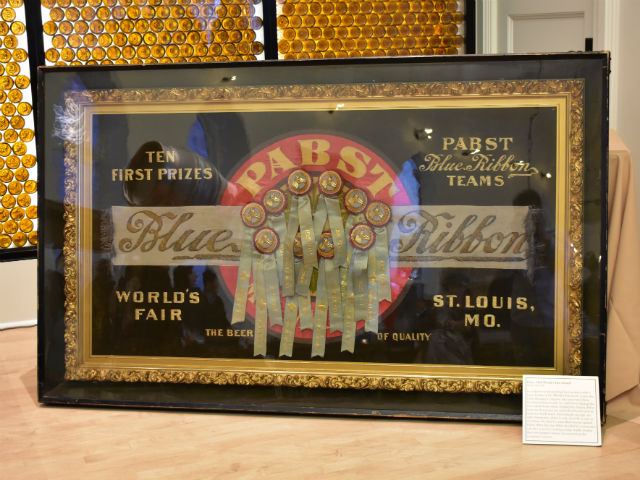 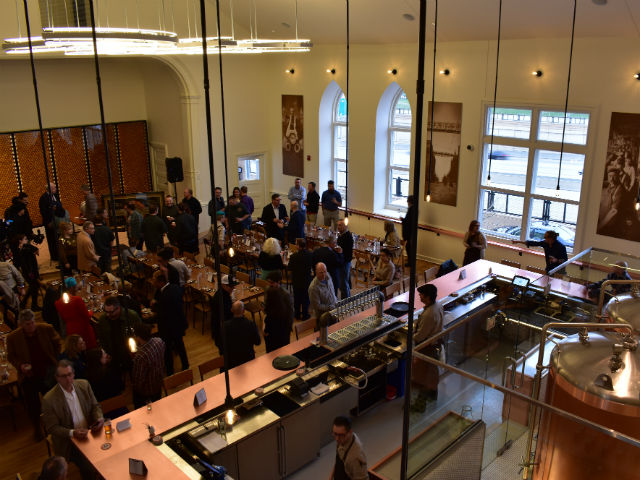 9. The gastropub will serve a menu of local and sustainably sourced food 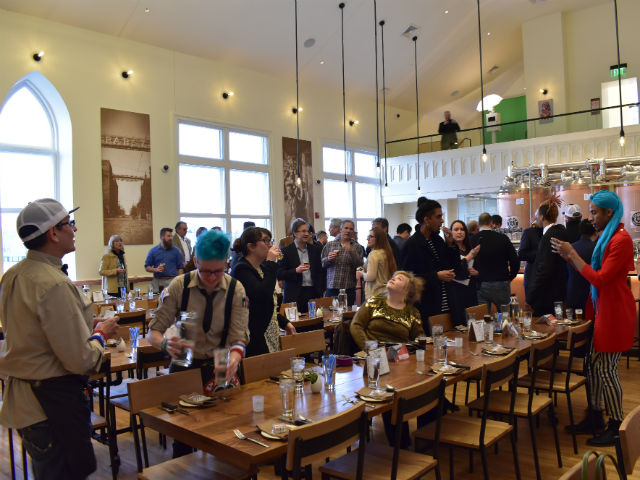 10. The Pabst Milwaukee Brewery will have the capacity to produce 4,000 barrels of beer per year 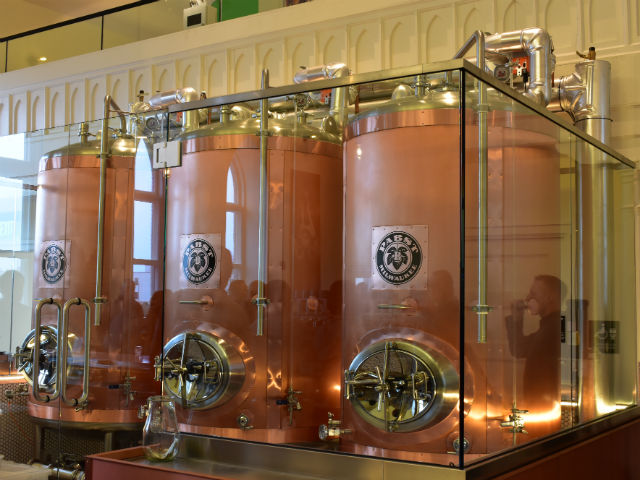 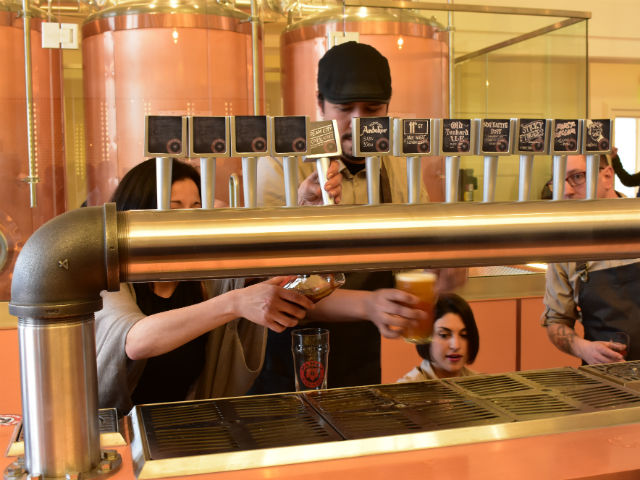 12. The Milwaukee operation can have up to eight brewing lines going at once 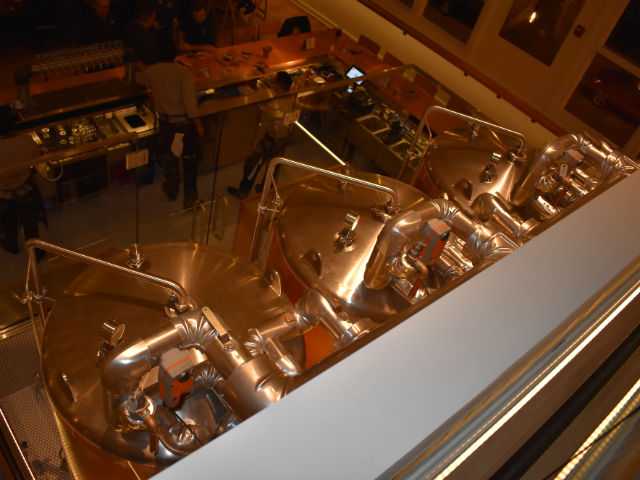 13. History is everywhere here; a photograph of Frederick Pabst hangs on one wall 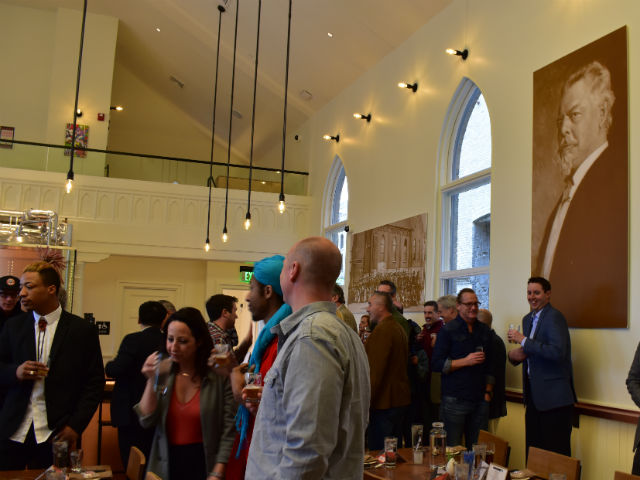 14. Say hello to Brad, one of your friendly Pabst Milwaukee bartenders 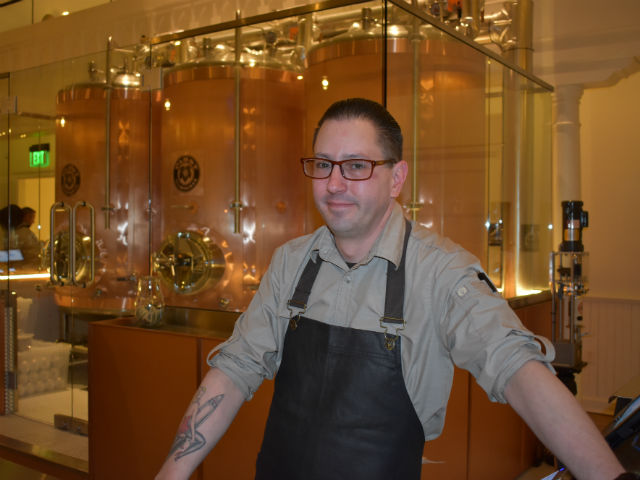 15. Beer is good; good beer is even better (and Pabst will offer beers in giant 32-ounce to-go cans) 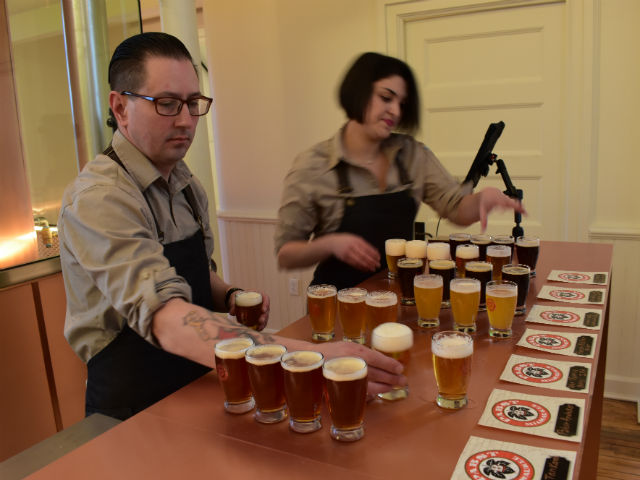 16. New Age Narcissism will perform at the street festival May 13 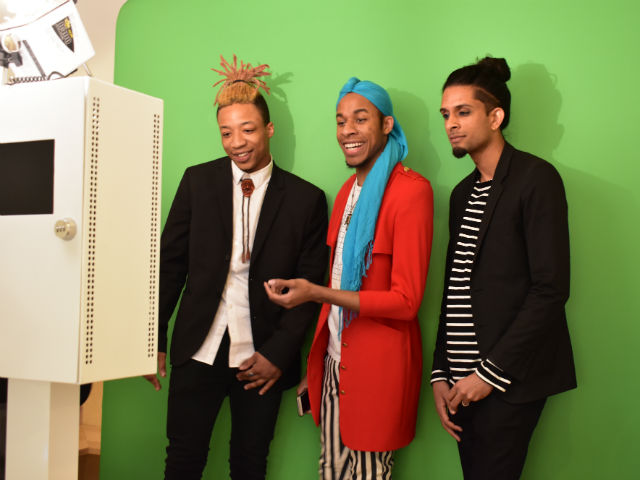 17. And here is information on that festival 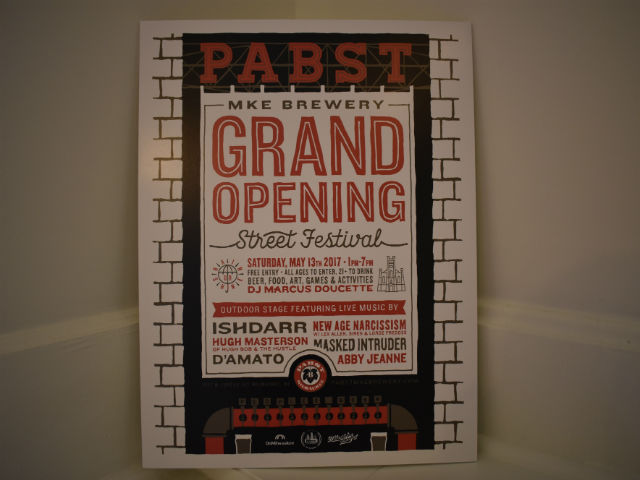 18. Pabst Brewery Milwaukee: It's a lot more than just PBR 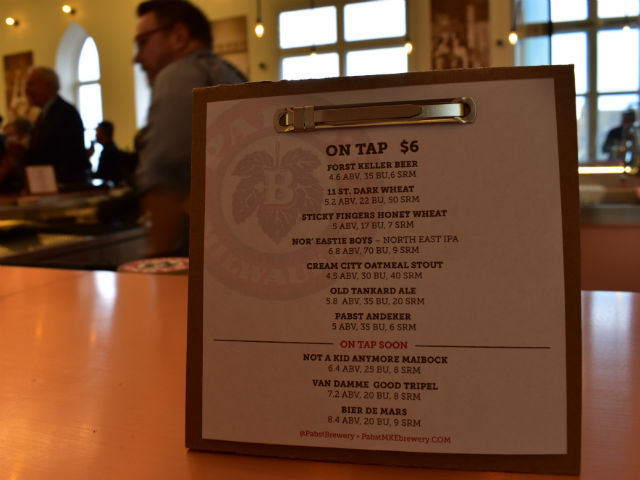 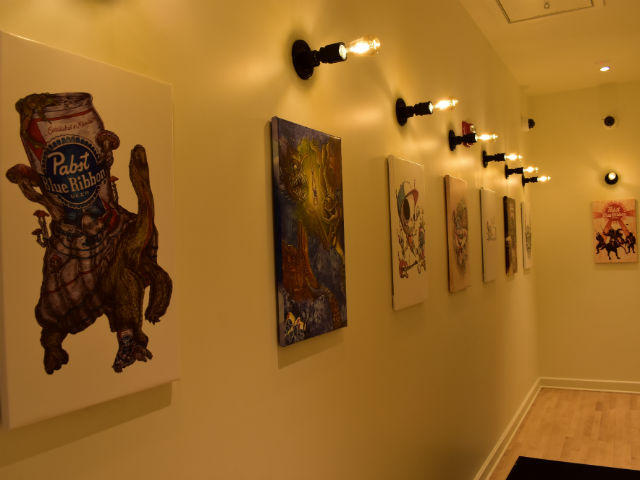 20. This giant Pabst sign hangs from the ceiling and lights up the space 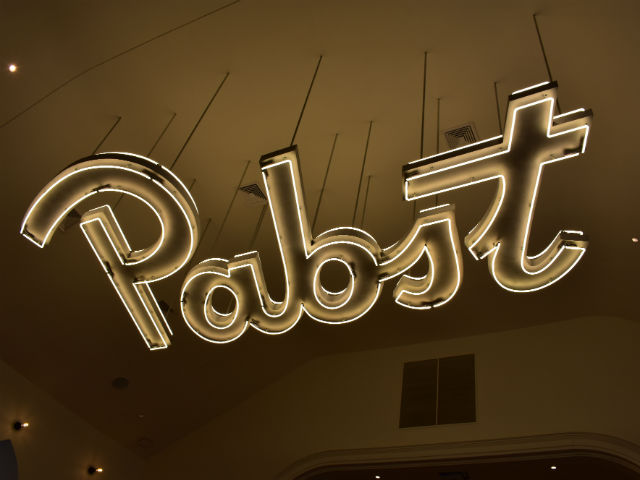 What are you waiting for? Go drink at the new Pabst Brewery Milwaukee right now!