Yesterday, I walked around Packard Avenue in Cudahy for the first time in a long time. I mean, I drive through or around Cudahy all the time, but yesterday was different. I stopped to smell the roses. Every real Milwaukeeans should pay a visit to downtown Cudahy every now and then. It's like a window into our past, and it's still alive and kicking today.

Yesterday, I walked around Packard Avenue in Cudahy for the first time in a long time.

I mean, I drive through or around Cudahy all the time, but yesterday was different. I stopped to smell the roses.

Every real Milwaukeean should pay a visit to downtown Cudahy every now and then. It’s like a window into our past, and it’s still alive and kicking today.

I found myself on Packard to do interviews for an upcoming article on South Shore Cyclery – which is a great place, by the way – but looking around that block of 4700 S. Packard Ave., I was reminded of a whole bunch of stuff.

There’s Dretzka’s, an old-school one-off department that sells pantyhoes and sewing equipment and dry shampoo. There is Mirror Mirror, where I used to get my hair cut. There are three Chinese restaurants in a tiny radius. I found a brand new chocolate store (Jen’s Sweet Treats), a magic store, and the bowling alley I rolled one of my highest series ever (now apparently called Motion Lanes?), and all sorts of other one-off stores. A bit farther north, of course, is my favorite Polish restaurant, Polenez.

And there are bars. Lots and lots of bars.

In my mid-twenties, I heard about something called the "Packard Ave. Death March." The gimmick was to stop at every bar on Packard and have one beer. At the time, there was at least 20 taverns packed into a tiny circumference. At several of these neighborhood bars, the patrons I assumed I was a cop, but I beat the challenge. That’s the kind of stuff I would never even try at 40.

But my most significant memory of Cudahy comes from a little building just off Packard. Back in the ‘90s it was a toner replacement shop called Precision Media Products, and it was owned by my old boss from Johnson Controls and his wife. Early supporters of OnMilwaukee.com, they kindly offered to process credit card transactions for our first advertising customers – because in 1998, we didn’t have the wherewithal to do that.

While legend is that we started OnMilwaukee.com in my East Side apartment, the finances actually ran through Cudahy at first. An old-school city working on something pretty cutting edge in the early days of the Web. 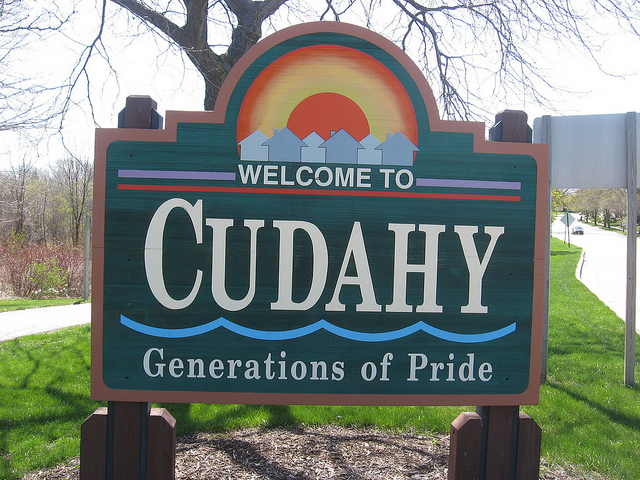 But Cudahy is hardly new. Originally known as the Buckhorn Settlement, Cudahy is literally a factory city. Patrick Cudahy purchased 700 acres of land in the Town of Lake in the late 1800s, and in 1906 Cudahy was incorporated as a city with a population of 2,556. Now there are some 18,000 residents there, with plenty of quaint neighborhoods right by the lake.

So, don’t forget about Cudahy. Next time you’re in the neighborhood, get out and walk around a little and savor a place that doesn’t seem like it should even still exist. It’s small-town Main Street right in Milwaukee’s backyard. It’s worth a visit.

Stunning historic house for sale in Cudahy is anything but typical