The Bears still suck: 8 key images from the Packers' 41-25 beatdown of Chicago

Packers fans: Give thanks for Mitchell Trubisky.

It was a weekend for giving thanks – thanks for family, thanks for friends, thanks for good health and, on Sunday night, thanks for your hated rival having an inept quarterback at the helm as the Packers made the Bears look like bums in primetime, clobbering Chicago, 41-25. And it wasn't even that close as the Bears flailed on offense and somehow looked even worse on defense.

The crushing was exactly what the doctor ordered for the Pack after blowing a lead and losing in overtime last week against the Indianapolis Colts – and most important, it kept Green Bay in solid playoff standing. The Packers now have a fairly comfortable three-game lead over the fumbling Bears and Vikings (who narrowly pulled out a victory over the Panthers on Sunday to stay alive). Plus, thanks to the Rams' unexpected loss to the Niners, they moved into second place (for now) in the NFC standings, still just a game behind the Saints for the top spot and a first-round bye.

There was a lot to enjoy about Sunday's stomping ... so let's relive it one more time with these important (and not-so-important) images from Sunday night.

1. Just another day at "The Office"

The bad news: We didn't have an Aaron Jones sombrero shot from last night's game. Don't be alarmed, though, because when you're playing Mitchell Trubisky and the Bears, I guess you don't need lucky charms to get a win. Plus, there was still some fashion fun on the night thanks to this delightful hoodie representing Schrute Farms – which is very easy to find: It’s right in the middle of the root vegetable district, and if the soil starts to get acidic, you’ve gone too far.

Well, I know what's on my Christmas list this year (other than getting to play Mitch Trubisky again).

2. We missed you, Mitchell

Due to a hip injury, the Bears were without starting quarterback Nick Foles for Sunday night's scrape, so for the first time since Week 3, it was Trubisky Time. Let's take a look at some of the highlights!

And that's not even including the assorted passes that fell woefully short of their intended receivers. By the end of the night, Trubisky finished with a respectable 242 yard and three touchdowns, but much of that game in garbage time when the game was essentially done. But that's OK; at least the Bears didn't comically overreach for him in the NFL Draft, picking him instead of Patrick Mahomes, Deshaun Watson or Christian McCaffrey. Boy, wouldn't THAT still be embarrassing several years later!

The @packers are having some fun vs. their rival! 10/10 celebration from the defense ð

Now THIS is a celebration. None of this generic tough-guy posing for the video board stuff. This is the kind of ingenuity, teamwork, coordination and well-practiced timing I like to see. Is there a correlation between the Packers winning this game and this ambitious group celebration? I nominate yes ...

While Trubisky's return may have been heartwarming for the Packers defense, the truly pleasant comeback was in the stands as 500 team employees and their families were allowed to watch the game in the bleachers – the first time Lambeau Field has held fans this season. Obviously it wasn't entirely normal, but it was the closest thing we've had to normal since last season, with actual cheering for exciting moments instead of canned noise and the classic needle drops to get the fans (and players) going. And while it was probably too cold for me personally, those in the small crowd kept themselves warm with some spicy hot takes.

4. The night's only scary moment

With mostly well in hand after the second quarter, the night was mostly smooth sailing – save for this legal but brutal-looking hit on Packers wide receiver Allen Lazard, who had just come back from injured reserve last week. Thankfully, he would be able to walk himself off the field, and as you can see below with Jamaal Williams, he seemed to feel much better later on.

Winning: the ultimate cure – though here's to Lazard feeling better and recovering throughout the rest of the week as well.

TD for the TE!

Last week, the Packers blew a two-touchdown lead to the Colts en route to their third loss of the season. That wasn't happening again this week as Green Bay shutout the Bears in the third quarter and, with the help of this long Robert Tonyan touchdown, expanded their 17-point lead at the half to a 41-10 laugher with a final frame still to go. How kind of the Packers to let everyone comfortably go to bed early after a long holiday weekend. 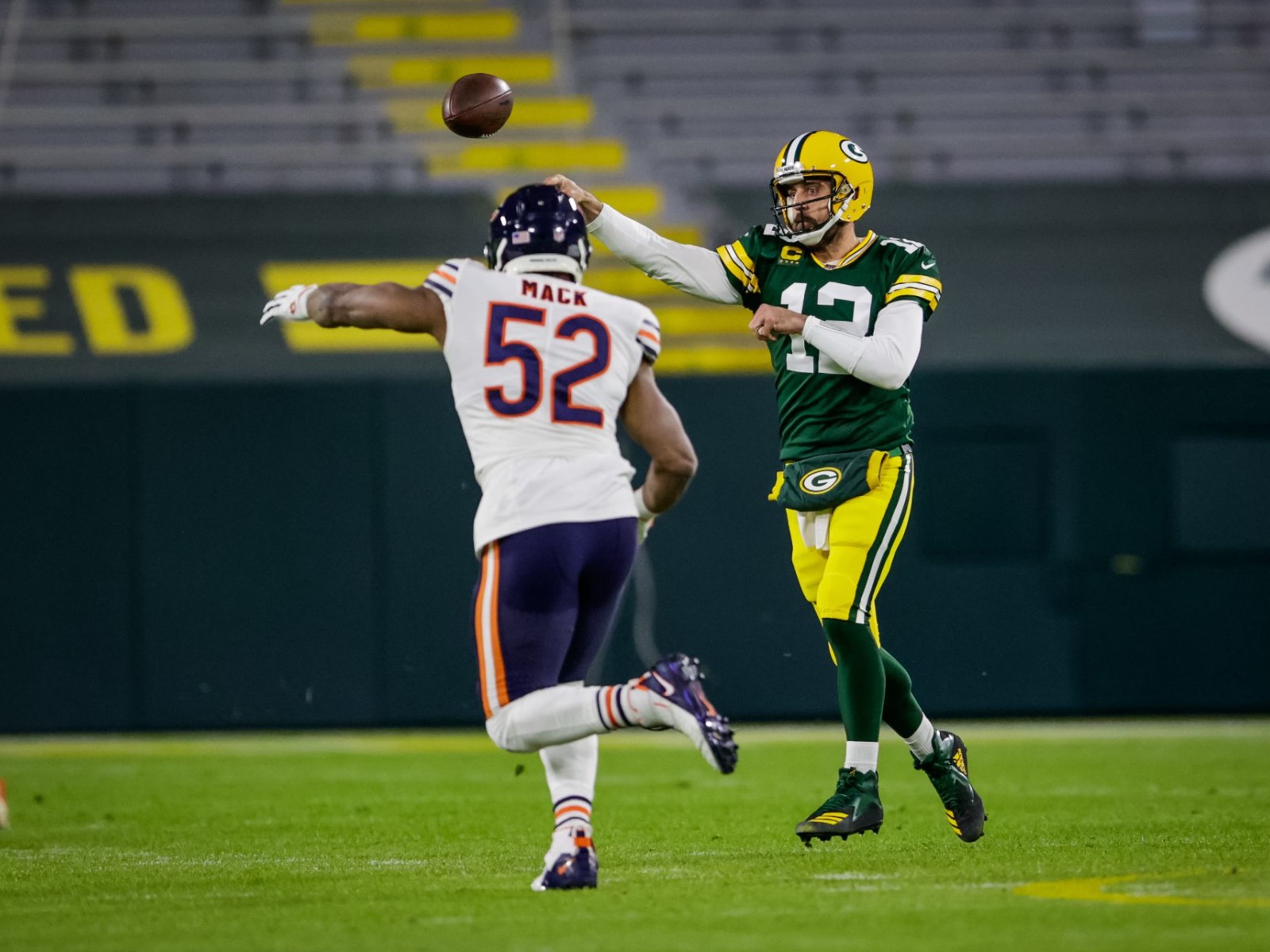 It was a romping for the record books last night in Lambeau Field – on multiple levels, for multiple players. Aaron Rodgers became the 11th player in NFL history to throw for 50,000 yards, Davante Adams caught his 500th pass in the NFL (a touchdown, as an added bonus) and the victory marked the Pack's 100th win over the Bears. That's a lot of losing, Chicago.

The game was never as close as the final score says, but it still wasn't a perfect performance – especially for the much-maligned Green Bay defense.

Though the squad snagged several turnovers and even put up a touchdown of their own, the bookends of the game weren't spectacular as the Packers started the game by getting scorched by Bears running back David Montgomery for a 57-yard scamper. (Thankfully, it only resulted in a field goal, but Montgomery still ended up putting together his best performance of an otherwise struggle of a season with more than 100 rushing yards on the night.) Then Green Bay coughed up a lot of yards and points to end the game. Sure, it was garbage time, but it still would've been nice to see that side of the ball keep the boot on the neck and put together something close to a complete performance.

Maybe that'll come next week against the hapless NFC East and the surprisingly struggling Philadelphia Eagles.