Pride has always been a residual effect of riding, building or promoting Harley-Davidson motorcycles, and once again, the H-D pride is reinforced through the Harley-Davidson Museum's latest exhibit called "(P)ART: Photographs Revealing the Art of Mechanical Form." This new exhibit opened last week and runs through Sunday, May 17.

As a lifelong Milwaukeean, I have always felt proud of the Brewtown-based Harley-Davidson company even though I have never owned nor rode a Harley.

This strong sense of Harley pride was again reinforced last year when I went on the steel toe tour of the Pilgrim Road Powertrain Operations facility in Menomonee Falls that’s offered by the Harley-Davidson Museum. During the tour, I noticed that almost all of the factory workers had on Harley T-shirts and was pleasantly surprised when the guide informed us they did not have a dress code.

It’s safe to say pride has always been a residual effect of riding, building or promoting Harley-Davidson motorcycles, and once again, the H-D pride is reinforced through the museum’s latest exhibit called "(P)ART: Photographs Revealing the Art of Mechanical Form."

This new exhibit opened last week and runs through Sunday, May 17. Admission to the exhibit is included with a general museum admission – adults $20; seniors, students and military $14; and kids $10 (those 5 years old and under are free).

The exhibit is located in the Archives bridge on the second floor of the main museum building.

(P)ART features 29 artistic, black-and-white photographs that highlight the style of legendary Harley-Davidson motorcycle parts from wheels to engines to handlebars. The photos are grouped according to aesthetics – meaning the images that work best together – not on a timeline.

The photographs range in date from 1912 to 1966 and were selected from the Harley-Davidson Archives collection, which includes more than 100,000 images. Thousands of the photos are of individual motorcycle parts and components. This organized, comprehensive archive continues to offer modern enthusiasts a portal to the company’s past.

Many of the images in the exhibit were used in advertisements, catalogs, service manuals and other company publications. 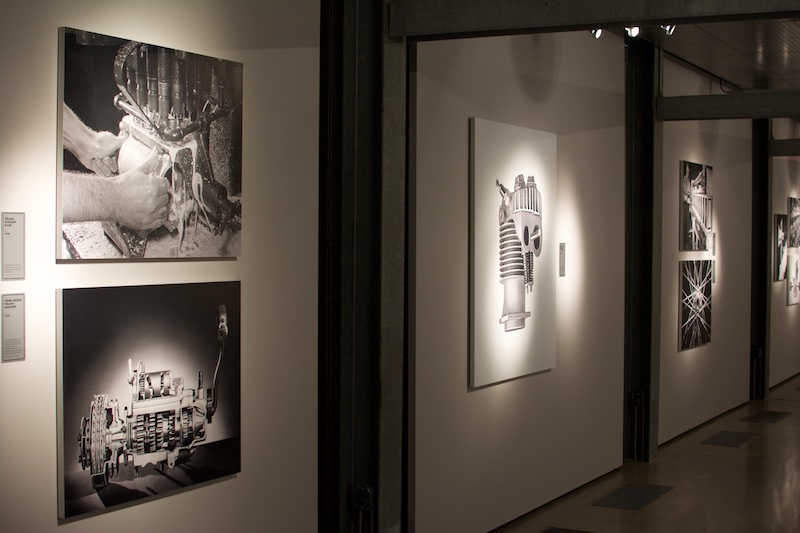 Initially, the photos were chosen via a computer screen and later made into much larger, higher-resolution works of art.

David Kreidler, the exhibits curator for the Harley-Davidson Museum, says that when the images were reproduced on a larger scale they sometimes revealed "surprises" in the composition that were not originally spotted. For example, in the collection’s oldest photo, a 1912 shot taken of a massive pile of handlebars at the old Juneau Avenue manufacturing plant, there’s a rat in the lower right of the photo.

"We were blown away by rat when we noticed him," says Kreidler.

Coincidentally, one of the images – taken of two workers on the factory floor – was sent in by a woman at the same time images were being selected for inclusion in (P)ART.

The photo is one of the strongest in the collection, with massive gears hanging from the ceiling that give it a futuristic / steampunk appearance.

"She sent us the photo with a note saying the man in it is her father. It was one of those serendipitous moments in the process of putting this show together," says Kreidler.

Kreidler says the amount of work that originally went into creating these images – without the help of Photoshop and other technology – make them even more impressive.

"The amount of time spent by the photographers to make these images just right is incredible," he says.

Some of the photos feature human hands and were selected to reflect the craftsmanship and hard work that goes into the manufacturing of a Harley-Davidson motorcycle.

For Kreidler, the exhibit represents 112 years of the Harley-Davidson experience and the company’s commitment to the future – as well as to history.

"It was a lot of fun pulling back the cover and once again showing visitors what the company’s held onto all of these years," says Kreidler. "As well as showing the amount of pride that goes into everything that happens here." 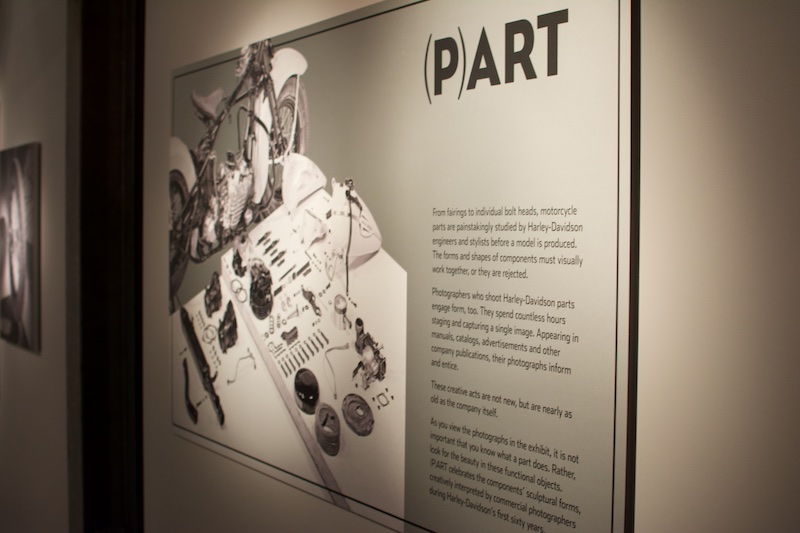