In a time when Zappos and Amazon and brick-and-mortar sporting good chains have cemented their spot as go-to places for running shoes and apparel, you might not think that starting a local running store would be a sound business idea. Don't tell that to Jessica and Trae Hoepner, the owners of Performance Running Outfitters, a business that started with one humble store and expanded to three, with a fourth in the works.

In a time when Zappos, Amazon and brick-and-mortar sporting good chains have cemented their spots as go-to places for athletic shoes and apparel, you might not think that starting a local running store would be a sound business idea.

Don’t tell that to Jessica and Trae Hoepner, the owners of Performance Running Outfitters, a business they started with one humble store and expanded to three – with a fourth in the works.

If you ask the Hoepners, it turns out that Milwaukee area runners really appreciate local.

For Jessica and Trae – who met running high school track – opening the first store was a dream that finally came to fruition in 2006 … but it wasn’t easy. Like many entrepreneurs, the couple took out a second mortgage and cashed in their retirement savings to get their business off the ground.

"The banks wouldn't give us a business loan," says Jessica. "That's why we ended up using all our own assets. The very first retail space we looked at asked who would shop at a running store. We don't want to rent from these people because they didn’t believe in us."

Instead, the Hoepners settled on a small shop – that has since grown – at 2205 N. Calhoun Rd., inside Ruby Isle shopping center in Brookfield. Both admit they work in their stores pretty much all the time and have learned a lot from the strip mall's owner.

Of course, in the beginning, it was just the owners, Jessica’s brother and one employee. But once the store opened, a funny thing happened: It started to grow.

Says Jessica, "We were starting to sponsor races, and we put a lot of time into getting our coupons out there. It just slowly grew to the point where people were like, 'We'd really like you to be in another area.’ That's when we expanded into Oconomowoc."

Then came Shorewood, and this fall, they will open a store in Oak Creek.

So why is Performance Running Outfitters continuing to grow, when places like Amazon have the purchasing power to undercut just about everyone?

Trae explains that, for runners, sometimes you need an expert – a human – to actually look at your feet and determining your shoe needs. That includes a slow-motion video gait analysis on a treadmill. 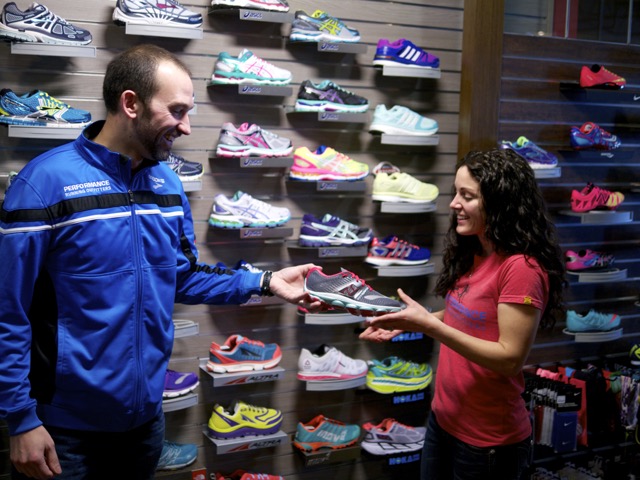 "There's a lot things that we see that a shoe finder's never going to tell you," he says. "Customers might say their hips are weak, or their knees got bent out. We take a look at the shape of your foot, the structure, anything that steps up or stands out, like a bunion. If you're having any foot pain like plantar fasciitis, we start to talk you through some of that stuff. We usually start with a test shoe, so something that's very flexible."

And then they go from there, testing and tweaking until they get it right.

It’s true that some customers try on shoes at the shop, then just buy online anyway, but Trae says he can almost always price match Amazon. And with almost 30 employees – all expertly trained – customers quickly realize that this isn’t the same experience as trying on shoes in the mall.

While he says shoes represent 74 percent of the business – Trae is the numbers guy in the business – Performance Running Outfitters also sells apparel, GPS watches and other accessories. Trae calls his business a one-stop shop.

"Pretty much if you need it in running, we can either get it for you or we already got it here," he says.

Recently named one of America’s top 50 running stores, the Hoepners must stay on top of trends and technology, as well as recognizing what might be hot in New York and L.A., but doesn’t work in Wisconsin. They also rely on colleagues within the industry – physical therapists, for example – to send them business via word of mouth and social media. Milwaukee’s runners tend to be very, very loyal, they've found.

Running continues to grow in popularity, says Jessica, but particularly as its participants find new ways to challenge themselves, like Spartan races, Cross Fit, 50Ks and ultra marathons.

"Running is going to be a part of something bigger," she predicts.

"I've never seen so many ultra runners in my life before," says Trae. 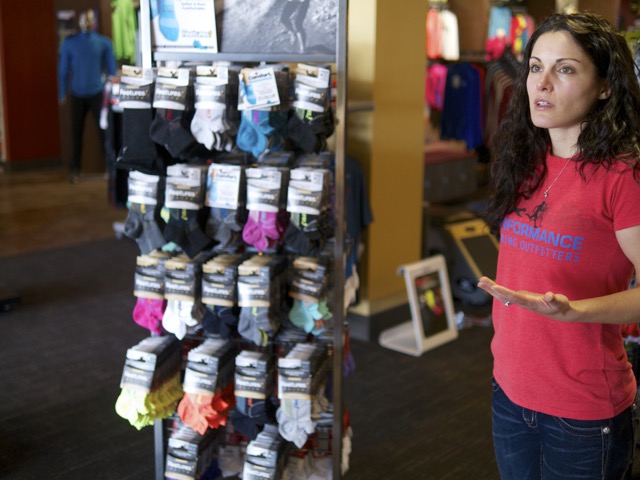 Of course, both Trae and Jessica still run – when they can peel themselves away from running the business.

"People think you own a running store, and it's just running and talking running," says Trae. "It's a lot of paperwork and sitting in the office for 10 hours, writing orders."

But neither would have it any other way. For the most part, Jessica and Trae are living their dream.

"We can be together, be at races, and we have a similar passion," says Trae with a smile. "Our staff is awesome, and some of our best friends in life now are people that we've just met through the store."

Running tips from a pro

Where do you run, Milwaukee?