PHOX brings on the phun with solid, quirky perphormance

PHOX's Summerfest performance was exactly what you'd expect from a slightly irreverent indie band whose self-titled Partisan debut has been called one of the best underground-pop records of 2014.

I’ll admit I’ve got a little bit of a crush on PHOX, the folk-pop sextet from Baraboo who have described themselves as a "self-sabotaging group of sad sack children."

But it wasn’t a raggle taggle band performing at tonight’s Summerfest opener for Edward Sharpe and The Magnetic Zeros at the BMO Harris Pavilion. And, despite the fuzzy, slightly muddled sound system that seems to be inherent to BMO shows this year, their performance was exactly what you’d expect from a slightly irreverent indie band whose self-titled Partisan debut has been called one of the best underground-pop records of 2014.

The past year or so has been a whirlwind for PHOX who has received countless accolades from national media including NPR and Time Magazine. Earlier this year, PHOX debuted on CBS This Morning’s "Saturday Sessions" and made it on the docket for notoriously popular music fests like Bonnaroo and Coachella, where singer-songwriter Monica Martin reportedly kept up with the festival’s indie-bro frontmen by dropping memorably snarky Wisco gems like "This song is about what an ass Scott Walker is."

PHOX hasn’t played in Milwaukee since last January’s gig at the Pabst; but, it was quite evident that they’ve spent some time on the road. And although "polished" isn’t the word I’d use to describe their performance, there was a certain charm about it. Bizarrely chaotic, yet endearingly folksy, the show attracted a largely under-30 crowd some of whom gathered in front of the stage, as most held back, easily filling the bleacher seats at the BMO, with more gathering in rows behind the theater.

Martin’s stage presence has taken a hit in reviews before, with many citing the admitted shyness of the ex-hair-dresser. But, Martin’s presence was casual, comfortable and intimate. 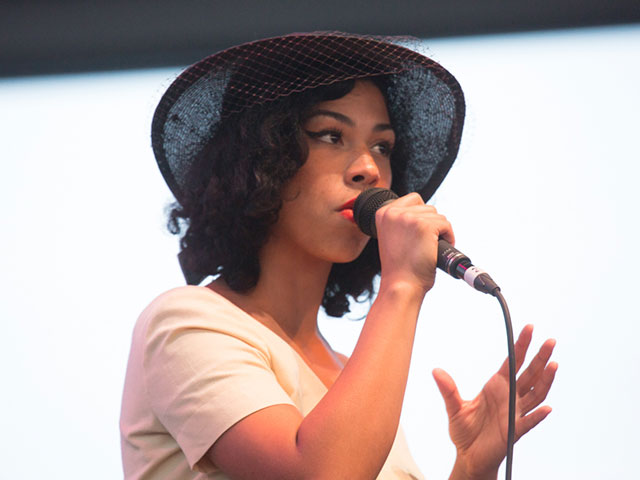 Beginning early on -- and persisting throughout the show -- Martin kept up a charming banter with the band and audience, expressing gratefulness and familiarity which further evidenced the claim that "you can take the band out of Wisconsin, but you can’t take Wisconsin out of the band."

"I can't tell you how much it warms me to see so many familiar faces," said Martin. "I love the family we've created here in Milwaukee… you guys are so great… Radio Milwaukee has been so good to us… Fuck! I love you!"

She also cracked numerous jokes; at least one related to cheese curds, and another making reference to Pokémon character Espeon (before playing the song, "Espeon" of course). At one point, she produced a banana shaped shaker, which she played and then placed safely away in her cleavage for a portion of the song.

The set ran the gamut between up-tempo tunes, like "Slow Motion" and gentle a capella numbers like J. E. Sunde's "I Will Smile When I Think of You," during which Martin shone both solo and when accompanied by tone-perfect harmonies.

There were occasions of sheer silliness. Take for instance the moment guitarist and horn-player Matt Holmen, who was already decked out in a powder pink suit and hat, donned a red super-hero cape and slid into a grand guitar solo, cape blowing in the wind thanks to the assistance of a box fan brought on stage by a member of the crew. 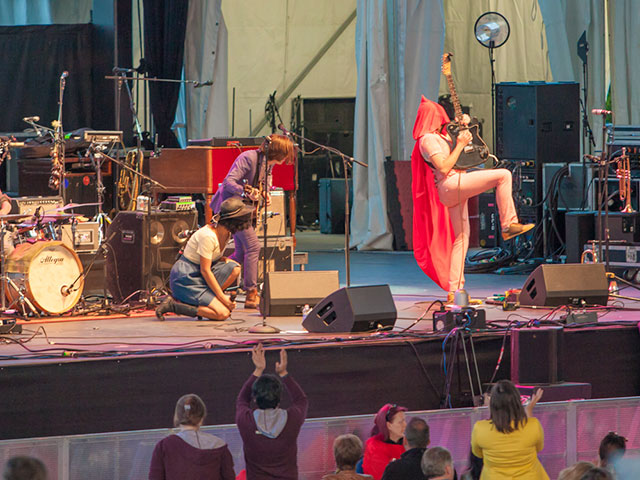 There were also endearing moments -- when Martin dedicated "Blue & White" to a former tennis coach in the audience, who she credited with being part of the "collective cloud of dads" who shaped her life.

Intermingled with guitar, keyboard and vocals were the sounds of recorder, glockenspiel and trumpet, each instrument adding appropriately to the cacophony and steadied to shore by the ever-sultry confessional tones of Martin’s voice. 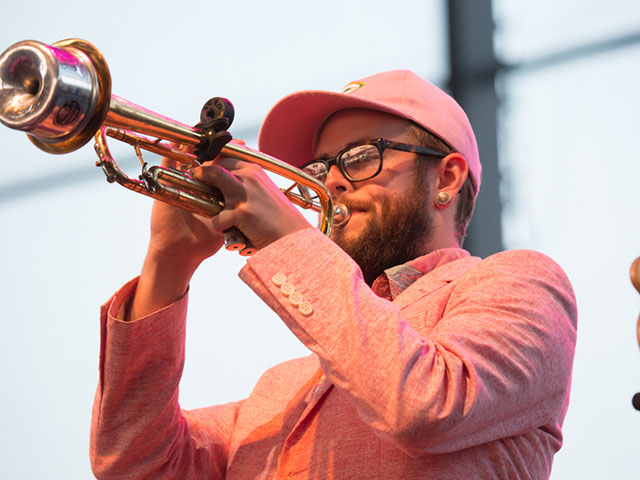 Although PHOX stuck primarily with standards from their released album, including "Evil," "Noble Heart," and "Kingfisher," they played at least one new tune -- an a capella ditty that Martin wrote at Justin Vernon’s studio, "sitting," as she said "in a welded woolly mammoth made of car doors."

"I sat there, and I said that I wouldn't leave until I finished a song," she went on. "But then I had to pee and so I did leave, but I also finished the song…"

And just as the chill of the evening brought a frigid wind whipping off the lake, PHOX would haul out a pleasant warming surprise like a version of "Garden of Night," during which Martin called out bandmate Zach Johnson to sing the song he’d written.

By the end of the evening, it was apparent that yet another home grown act has quickly embraced -- and lived up to -- their quick ascent to celebrity status. In fact, it seems the quirky innocence with which they once tiptoed has matured into a sophisticated presence with which they can feel confident in stomping forward.