Last weekend, Sarah Berg once again came down with an acute case of wanderlust and decided it was time to hop on her BMW motorcycle and get out of Dodge. So she went in search of delicious slices of pie and drove 1,000 miles by the end of the weekend.

Last weekend, Sarah Berg once again came down with an acute case of wanderlust and decided it was time to hop on her BMW motorcycle and get out of Dodge.

"I remembered a restaurant I had always wanted to go to called the Delta Diner in Delta, Wis., and so at first I thought I’d just go there," says Berg, who lives in Bay View.

However, after consulting a map, Berg realized she was close to another favorite restaurant in Rice Lake. Because both places were known for their pies, Berg decided to go on a "pie trip" and did some research online to find other spots.

Berg left on Friday evening and when she returned on Sunday night, she had put 1,000 miles on her bike and eaten six slices of pie in six different towns across two states.

"By the end of the weekend I had eaten enough sugar to last me for quite awhile," says Berg. "But I had a slice of strawberry rhubarb when I got home anyway."

Berg had one piece of pie on Friday; three on Saturday; and three on Sunday (counting the piece she ate at home). 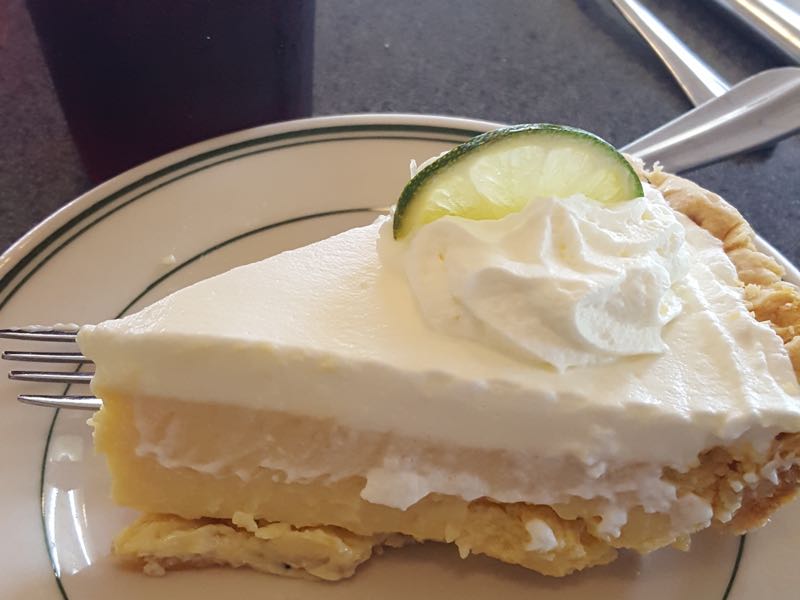 Berg’s Tour Of Pie started with a slice of banana cream from South Point Restaurant in Steven's Point. The next day, she had a piece of "bonfire pie" (chocolate chipotle cream with a graham cracker crust and marshmallow topping) from Delta Diner in Delta, in Bayfield County, followed by a slice of raspberry sour cream from Norske Nook in Rice Lake and a blackberry custard from Stockholm Pie and General Store in Stockholm, Wis. 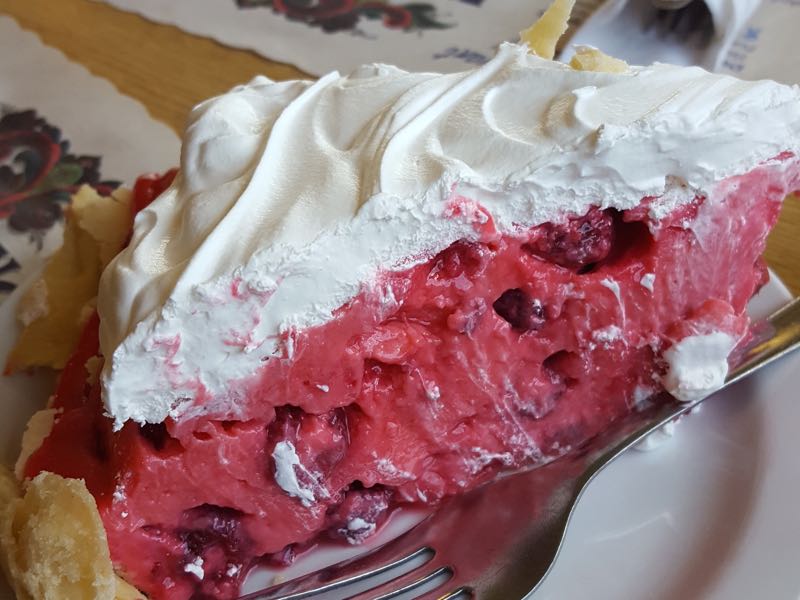 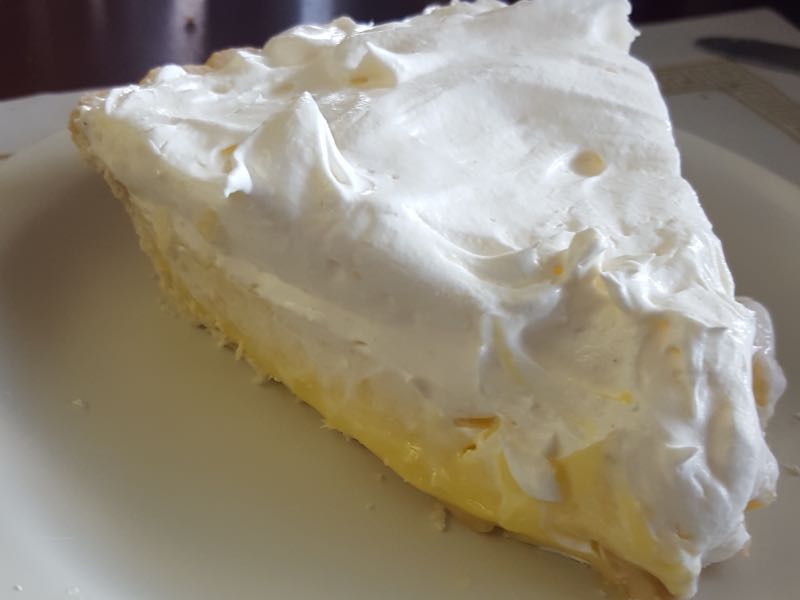 Finally, on Sunday, Berg rode to Whalan, Minn., for banana cream pie from Aroma Pie Shop and ended the junket with key lime pie at Hubbard Avenue Diner in Middleton.

Berg says all of the pies were delicious, but her top two favorites were the key lime pie at Hubbard Avenue Diner and the raspberry sour cream slice at Norske Nook, which she had tasted before.

"Every time I take my first bite of that pie I’m like, ‘ohhhhhhhh, yeah,'" says Berg.

This is not the first time Berg went the distance on her motorcycle for a food craving. She once drove to Lorman, Miss., to try the fried chicken at Old Country Store after host Alton Brown stopped in at the place on his TV show, "Feasting On Asphalt," and declared it the best fried chicken he’d ever eaten.

"He’s from Atlanta – so he knows his fried chicken – so I thought, ‘if this is the best Alton Brown ever had, I need to try it immediately,'" says Berg. "So I drove to Lorman, which is not easy to find by the way. It’s like a dot – you drive by and say ‘Oh, look! There used to be a post office there' – and keep going. But the chicken? It was delicious. It was worth the drive."

Even better than the chicken, however, was the experience itself. The restaurant is inside a large, cavernous building that was once, among other things, a general store and a saloon, and is lined with shelves loaded with knick-knacks that are for sale.

"It’s kind of like a Goodwill, but in the middle there are tables and a buffet," says Berg.

Best of all, the owner of the Old Country Store, "Mr. D.," roams from table to table, asking how folks are enjoying the chicken and singing a song about how his grandmother taught him to make it.

"I had the great feeling of ‘wow, I am in a place I have never been in before and I probably never will be again and it’s amazing,'" says Berg.

Berg will also ride to Huron, S.D., to get a steak at the Prime Time Tavern, where they serve (Monday through Thursday) a six-ounce bacon-wrapped filet, baked potato, salad and "giant margarita" for under $12.

"The server asks exactly three questions: how do you want your steak done, what size do you want (the steaks range from 6 to 24 ounces!) and ‘butter, sour cream or both?’" says Berg.

Last summer, Berg road tripped to Missoula, Mont., to go to a pizza place, Biga, that she had remembered was phenomenal.

"I probably didn’t need to drive to Montana for pizza, but it was really, really good," she says.

While in Missoula, Berg found a new favorite stop: a bar called the Missoula Club where the bartender solely makes burgers and drinks. There are so many scratches and writings carved into the wooden surface of the bartop that there’s actually a sign asking drinkers not to do that anymore.

Another time, Berg went to Utah – via Nashville – where she stopped for a plate of chicken and biscuits.

As for future food rides, Berg has Vermont at the top of her list where they serve "maple creemees" – or maple-flavored ice cream.

"There’s a place out there that serves it with kettle corn on top and it’s sweet and salty and crunchy and creamy and very, very good," says Berg. "What can I say? I ride to eat." 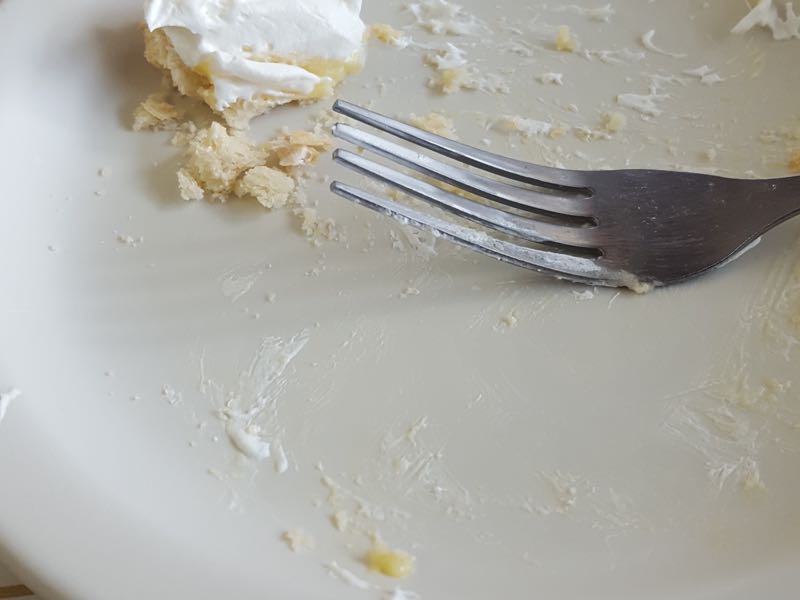