In search of the perfect pizza: Albanese's Roadhouse

In addition to pizza, Albanese's offers a slew of specials, including wings, Sicilian style pork chops and Italian style fish fry on Fridays. They also happen to have gluten free pizza that's worth seeking out.

One of the movie theatres I frequent is the Marcus Majestic in Waukesha. On my way to there, I’ve driven past Albanese’s Roadhouse, 2301 Bluemound Rd., in Waukesha, dozens of times. The parking lot was always pretty full, so I kept telling myself I would stop in when it wasn’t so busy.

It didn’t seem that would ever happen, so I just stopped in on a random Thursday evening when I was in the area. Thursday night happens to be $.40 wing night. Monday through Thursday nights also feature other specials, including an Italian style fish fry on Fridays and Sicilian style pork chops on Saturdays.

On my visits, I sat at the bar and was well taken care of by the bar manager, Phil Kelly, who happens to be Joe Albanese’s cousin. He was gracious enough to answer my questions and give me a little background about the restaurant between tending to other customers.

Albanese’s Roadhouse opened 33 years ago at the current location by Dominic Albanese. There were two other Albanese’s locations owned by family members, but this location is the only restaurant that remains. Around 10 years ago, Joe Albanese took over the business from his father, Dominic.

Albanese’s menu includes some unique items such as scungilli (conch) in the appetizer section, spedini and Italian sausage cacciatore in the House Specialties section, baked cod Neapolitan in the Seafood section, homemade amaretto cheesecake on the dessert list, as well as pastas, sandwiches, soups and salads.

On my first visit, I started with a half dozen wings, since they were only 40 cents. My options were BBQ, buffalo, or Italian style with a rub of Italian seasoning. I chose the Italian-style rub, and the wings were crispy, juicy and delicious! 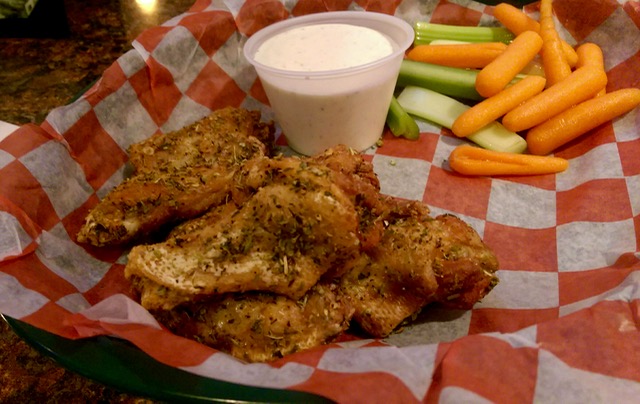 I also ordered a 10 inch sausage and pepperoni pizza. Actually, I ordered the classic combo minus the hot giardiniera. It turns out that a 10-inch pizza with cheese and two toppings would cost $11.25, but a 10 inch combo, which has two of the three toppings I wanted, costs $9.95. It was a no-brainer. I’ve had sausage, pepperoni, and pepperoncini on a pizza, and I like that combo. I think the hot giardiniera would have been great for flavor and texture, but I think the heat would have overwhelmed the flavors I wanted to taste on this pizza.

I didn’t know what to expect, so I was happy to see a very thin crust when my pizza arrived. All of Albanese’s pizzas are served on a thin, crispy crust cut into rectangular slices. The center slices were slightly softer on my pizza than the perimeter slices, but still crisp throughout. There were no traces of cornmeal on the bottom of the crust, which I was happy to see. Kelly told me that Albanese’s dough is made from scratch, in house several times weekly.

The sausage and pepperoni were both spicy and had great flavor. Albanese’s makes its Italian sausage and meatballs in house. The mozzarella cheese was generously applied, but I wanted more sauce. There was just enough sauce to lightly coat the crust, and I had a hard time picking up a distinct flavor. Like most pizzerias, Albanese’s starts with a canned base and adds their seasoning blend to it. What I was able to taste from beneath the cheese had a slightly sweet flavor. I think I’ll have to order extra sauce next time.

A couple of weeks later, I went back to try another pie. This time I got a little crazy and ordered the spinach special on the gluten-free crust! When I ordered it, I thought to myself, "Who is this guy?" I don’t know. I guess I just felt like helping out the veggie eating, gluten intolerant readers for once, just in case one of them happens to read this blog. At the very least, we can tell our vegetarian and gluten-intolerant friends. 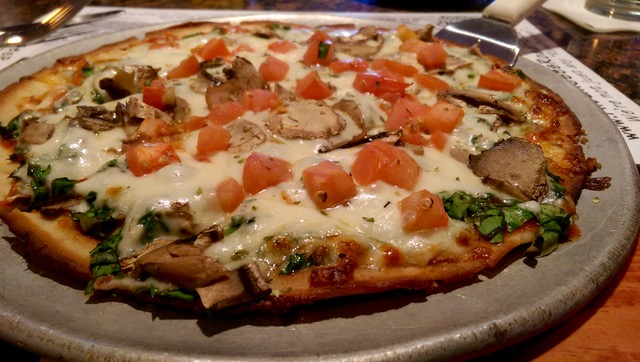 It looked great when it arrived, and the strange thing was that I liked it! The green and red of the spinach and tomatoes against the white mozzarella cheese made it look pretty. The spinach was finely chopped and applied over the sauce and below the cheese. Diced tomatoes and fresh mushrooms were added over the layer of cheese. Again, the pizza needed more sauce, but I really enjoyed the flavor. I couldn’t believe I was enjoying the flavor of a veggie pizza.

The gluten-free crust isn’t made in house, but it was one of the better gluten-free crusts I’ve tasted. Some gluten-free crusts end up too soggy. This crust was almost twice as thick as the housemade thin crust, and it was crispy around the perimeter. Again, I was pleased that there wasn’t any cornmeal on the bottom of the crust. I know some like cornmeal. I’m just not one of them.

The center slices were much softer than their house made crust and slightly chewy. The layer of cheese seemed thicker on this pizza than the Classic Combo on my first visit. Maybe the thick cheese layer is why I liked this pizza. I actually considered ordering a sausage and pepperoni pizza on the gluten-free crust on a future visit, with extra sauce of course.

My second visit was on a Sunday afternoon, and I sat at the bar again. There was live music coming from the dining room behind me. I heard a concertina, and there was definitely some polka as part of the play list. As I was closing out my tab, a large group came in for their private party, complete with a food buffet and open bar. I totally wanted to crash that party, but I wasn’t feeling my party-crashing mojo that afternoon.

On my two visits, the service was outstanding. Between the food and the staff, I could see why this place is so popular. Between the two dining rooms, large bar area, and the connected Dominic’s Sports Bar next door, named for the original owner of Albanese’s, there should be a spot for you even if the parking lot is full. I hope to return soon for the Italian-style fish fry, spedini, or homemade spaghetti.