Step back into the 1920s at The Plaza Hotel

Charming. It's a word I repeated a multitude of times to myself during a recent stay at The Plaza Hotel, a 1920s vintage hotel I'm certain is often overlooked all too often by travelers to the Cream City.

It’s a word I repeated a multitude of times to myself during a recent stay at The Plaza Hotel, a 1920s vintage hotel which I’m certain is often overlooked by travelers as they pore over the ever-growing list of modern places to stay in the Cream City.

There’s very little flash at The Plaza, 1007 N. Cass St. It’s not a high rise. It’s not a mega-plex or an amenity-laden priority-club chain. If you’re looking for modern and shiny, The Plaza simply isn’t your jam.

However, if it’s charm you’re after, you’ll find it at this art deco gem that embodies the subtle elegance of a small European style walk-up. 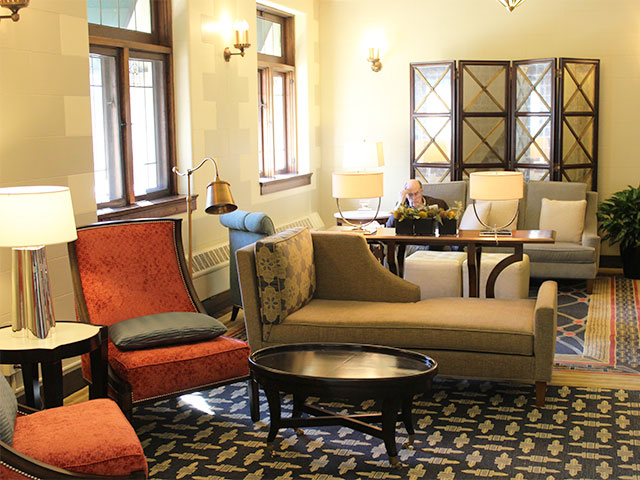 Guest rooms are clean and comfortable, but not lavish. And the building's interior, which has been modestly renovated, retains much of its original design and features, including pronounced geometric patterns, scrollwork and ironwork detail.

And The Plaza isn’t just an attractive place to hang your hat. Throughout our stay, staff were helpful as could be – from offering to help carry our luggage up to our room, to offering tidbits of history about the building – including the fact that, during World War II, The Plaza served as the local bomb shelter. 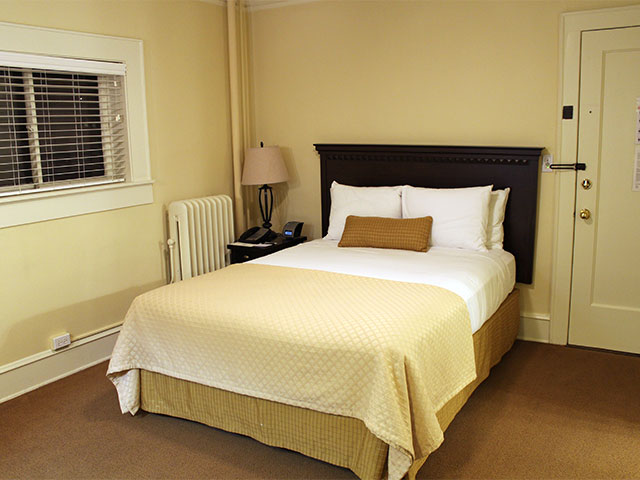 Our queen room, which is priced at just over $100, was essentially a studio apartment, complete with a comfortable bed, a fully furnished kitchenette equipped with service for four, as well as bakeware, cookware, Keurig coffee maker and Green Mountain coffee and tea service.

As far as atmosphere was concerned, our room was plain but comfortable. And if you are one who appreciates the workmanship found in homes during the 1920s, you’ll appreciate the little touches of character that crop up around every turn. 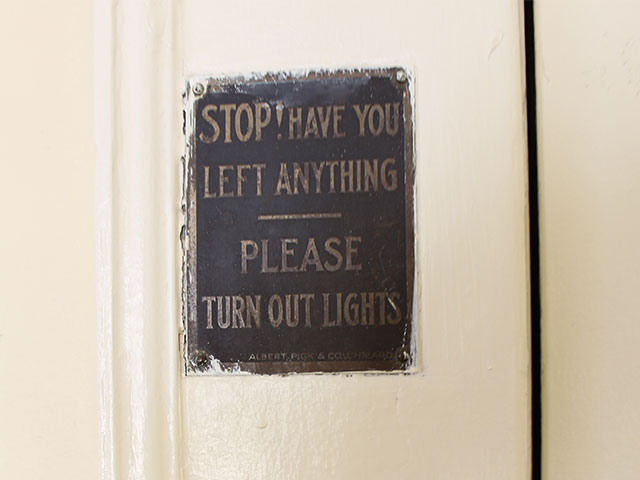 Even the bathroom, albeit small, was filled with character, from its pedestal style sink to original tile floors. 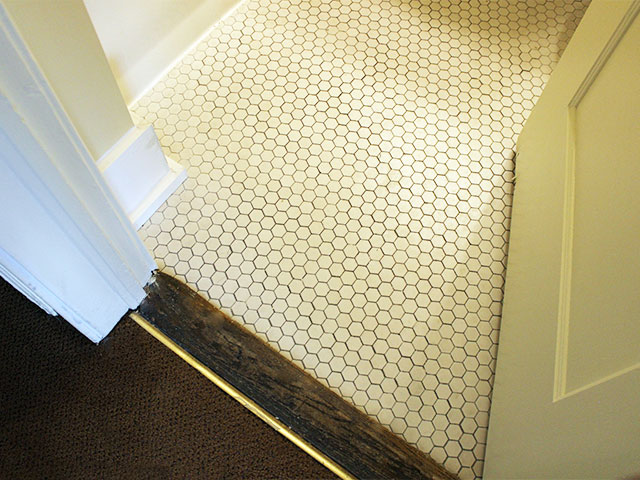 Entertainment and work amenities include free wifi and large wall-mounted flat-screen TV. Meanwhile, a dining/sitting room area provided space for eating, working at a laptop or enjoying a book. In fact, a sunny southern exposure would have made it the ideal location to linger with a cup of coffee and a paper on a sunny morning. 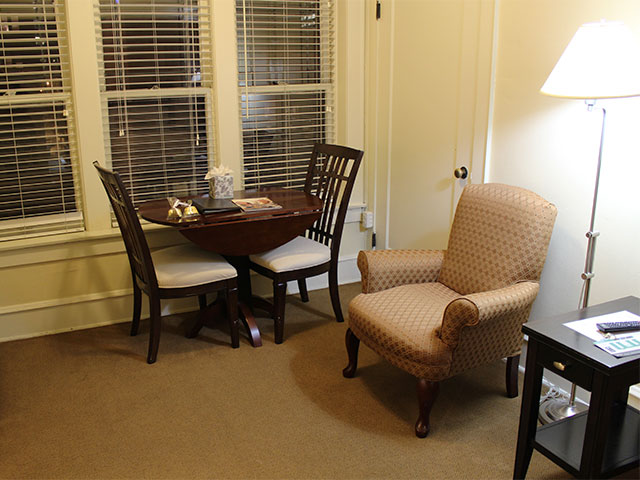 If you’re planning to stay in Milwaukee for a few days, or longer, The Plaza might just be the perfect place to lay down temporary roots. The hotel, which has served as a home away from home for actors from every theater company in the city, is well appointed for longer stays, including plenty of closet space for unpacking and settling in.

I’ve already mentioned the kitchenette, which was well-equipped for cooking at least a few meals during a longer stay. Stocking up on both groceries and victuals is easy with Metro Market just down the street. The grocer is not only convenient, but it offers up a wide array of ready to eat meals, soup and salad bar, gelato bar and hot and cold deli items, along with just about any food or healthcare items needed for an extended stay. 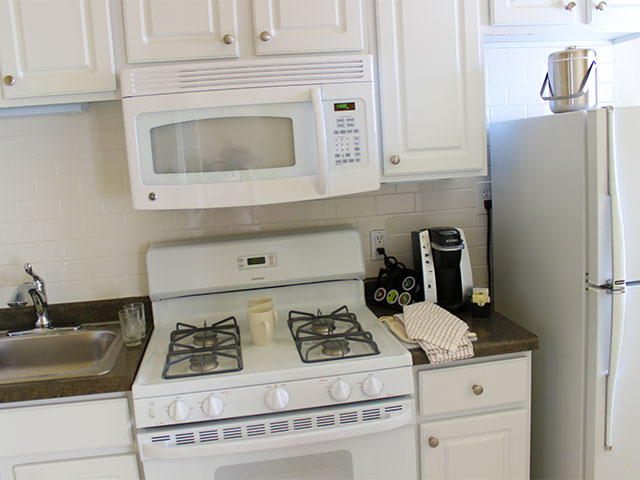 If you’re staying with friends, larger accommodations are also available. The two-bedroom suites, which run around $230 per night, include two rooms equipped with queen sized beds and full baths, along with a queen sleeper sofa, and a fully equipped kitchen, including full sized stove, refrigerator, microwave and dishwasher.

It's the little things

And sometimes it’s the little things that make a difference. If you’re feeling indulgent, or simply need to relieve yourself of the day’s stress, you can also make an appointment for personalized spa services, which include customized treatments by onsite therapist, Jeanne Marie Vielleux. Vielleux is trained in deep tissue massage, sports massage, Swedish massage, reflexology, lymphatic, and Shiatsu. Rates are $90 for a 60-minute massage treatment and $15 for an add-on facial.

It’s worth mentioning that it's a rare pleasure to stay in a hotel that’s so well located. The Plaza sits smack dab in a quaint, largely residential area that’s both walkable and safe. It’s near the lakefront and public parks, and within walkable distance of the Milwaukee Art Museum, Discovery World and Maier Festival Park. It’s also within a block or two of more upscale eateries, including Buckley’s and Bacchus, along with quaint spots like Mykonos Gyros & Cafe, located just around the corner. Of course, you’d be remiss if you didn’t grab at least one meal at the hotel’s cafe.

Originally a tea room where female residents entertained guests (since, at the time, they weren't allowed to do so in their rooms), The Café at the Plaza still retains a great deal of its original charm, from mythological tile work on the walls, to etched glass doors and quaint seating. During World War II, the space served a practical purpose. It was filled with cots that provided respite to sailors in the service who were traveling through Milwaukee. 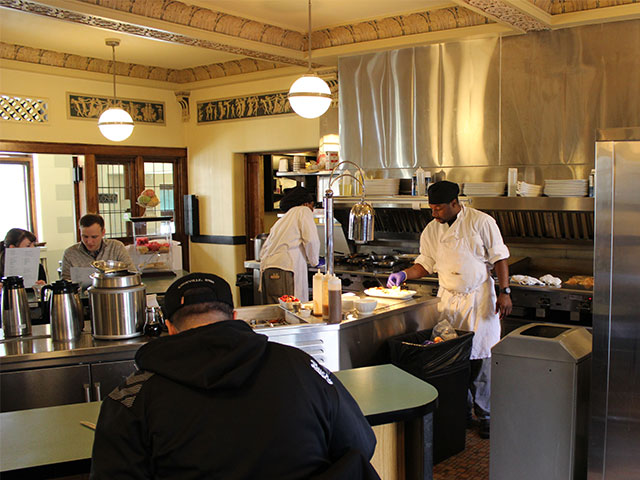 By 1950, a lunch counter was added and the tea room became a full service cafe that has served breakfast and lunch dishes to both locals and travelers alike for over 50 years. More recently, the kitchen was updated with new equipment, making the cafe even more efficient.

Offerings in the cafe, which is open from 7 a.m. to 2 p.m. daily, run from classic to modern, with breakfast options like eggs Benedict, corned beef hash and seasonal pancake specials like banana pancakes with brown sugar caramel and toasted walnuts. Lunch offerings include a nice selection of salads, soups and sandwiches, priced at $15 or less. 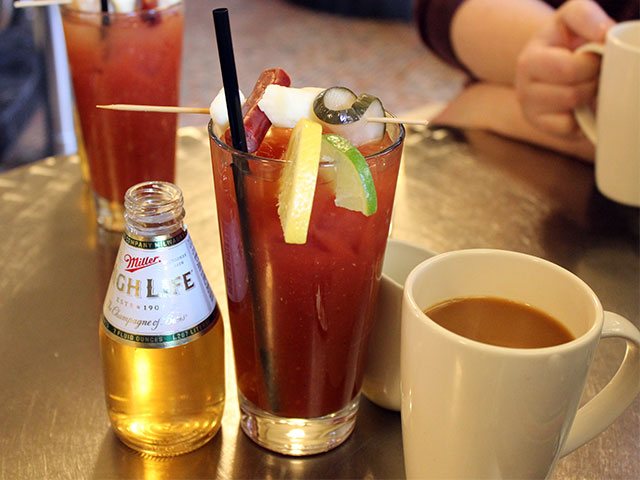 If you’re just looking for a bite, grab a freshly baked blueberry lemon muffin ($2.50) with steaming mug of coffee or a yogurt parfait ($9).

If you're looking for something heartier, there's also pork schnitzel served over house-made spaetzle with caramelized onions and bacon, topped with mustard cream sauce and two eggs any style ($13), or the 1007 Breakfast Sandwich with your choice of bagel, croissant or toast, smeared with herbed goat and cream cheese spread and topped with prosciutto, roasted tomato mayo, egg and arugula ($10) 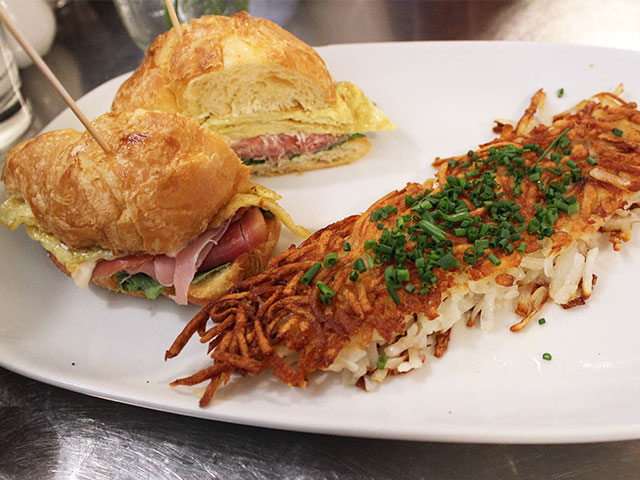 Or go all out with the breakfast poutine, featuring waffle fries covered in chorizo sausage gravy, eggs, cheese curds and avocado cream ($13). 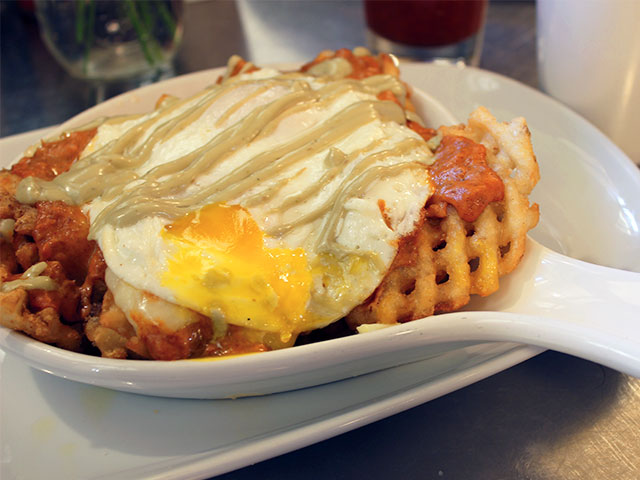 If the weather is warm, which it obviously wasn't during our stay, don’t miss the opportunity to eat outside in the open air courtyard patio. You can just imagine how gorgeous it looks in the summer, when streaks of sunlight peek between the buildings. 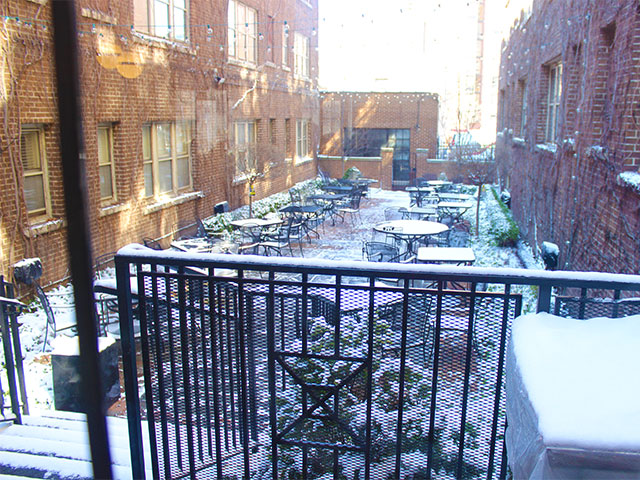