On Friday, folks from Menomonee Valley Partners, City of Milwaukee, Design 2 Construct, Paradigm Real Estate and BMO Harris were on hand as Plum Media President Rich Schmig turned the ceremonial shovel of dirt on the project to restore a 1920s Milwaukee building and turn it into Plum's new home.

On Friday, folks from Menomonee Valley Partners, City of Milwaukee, Design 2 Construct, Paradigm Real Estate and BMO Harris were on hand as Plum Media President Rich Schmig turned the ceremonial shovel of dirt on the project to restore a 1920s Milwaukee building and turn it into Plum’s new home.

Currently located in the Third Ward, Plum – a 20-year-old video and event production firm – is spending $1.85 million to transform the 1929 Milwaukee Casket Company building at 1418 W. St. Paul Ave., which you may have spied peeking up next to I-94. 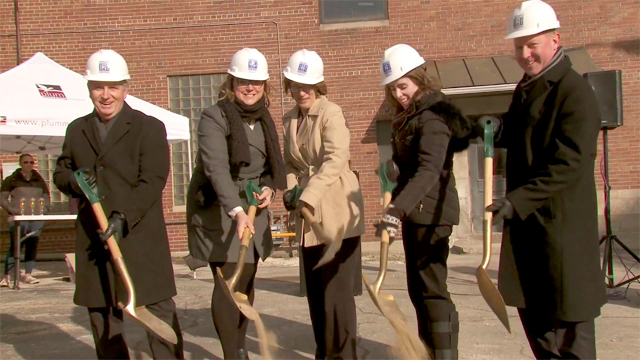 The finished project – designed by Design 2 Construct – will include what Plum describes as "an enhanced production studio, advanced video production and post-production facilities and live web-streaming capabilities."

The 15,000-square foot, neo-Gothic building was designed by A. C. Runzler and was part of a complex that encompassed at least three buildings located on a once-moribund section of the valley that was little more than a motor corridor and industrial area. The remaining building, from 1901, was designed by Charles Lesser. A third, now demolished appears to have been the work of Ferry and Clas.

Now, there’s Sobelman’s down the block and Third Space Brewing across the street. City Lights Brewing and Potawatomi Hotel and Casino, as well as Twisted Fisherman, are pretty close, too.

"Everyone at Plum [Media] is excited to be part of this growth," Schmig said.

I guess you might say this former industrial building is rising from the dead.

Stay tuned for a tour of this building, coming soon to OnMilwaukee.