If you're looking for a fun way to warm up, enjoy a bite and maybe share a creative flaming beverage with friends, look no further than the Enter The Dragon Bruce Lee takeover at Hotel Madrid. Take a peek at what to expect.

Art is the way to the absolute and to the essence of human life. The aim of art is not the one-sided promotion of spirit, soul and senses, but the opening of all human capacities – thought, feeling, will – to the life rhythm of the world of nature. So will the voiceless voice be heard and the self be brought into harmony with it. -Bruce Lee

If you’re looking for a fun way to warm up, enjoy a bite and maybe share a creative flaming beverage with friends, look no further than the Enter The Dragon Bruce Lee takeover at Hotel Madrid, 600 S. 6th St.

You’ll also be treated to walls of eye-catching urban art created by Michael Cerda, a local artist whose work has been displayed at Stand. Eat. Drink. Hospitality’s venues since 2017.

"When they approached me, the goal was to help them to conceptualize a really cool experience for the Bruce Lee pop-up… to use visuals to take the pop-up beyond the Chinese-American menu," says Cerda. "I’m a big fan of Wu Tang Clan, so the martial arts movie concept was definitely intriguing. I actually dropped another project for a bit to work on this." 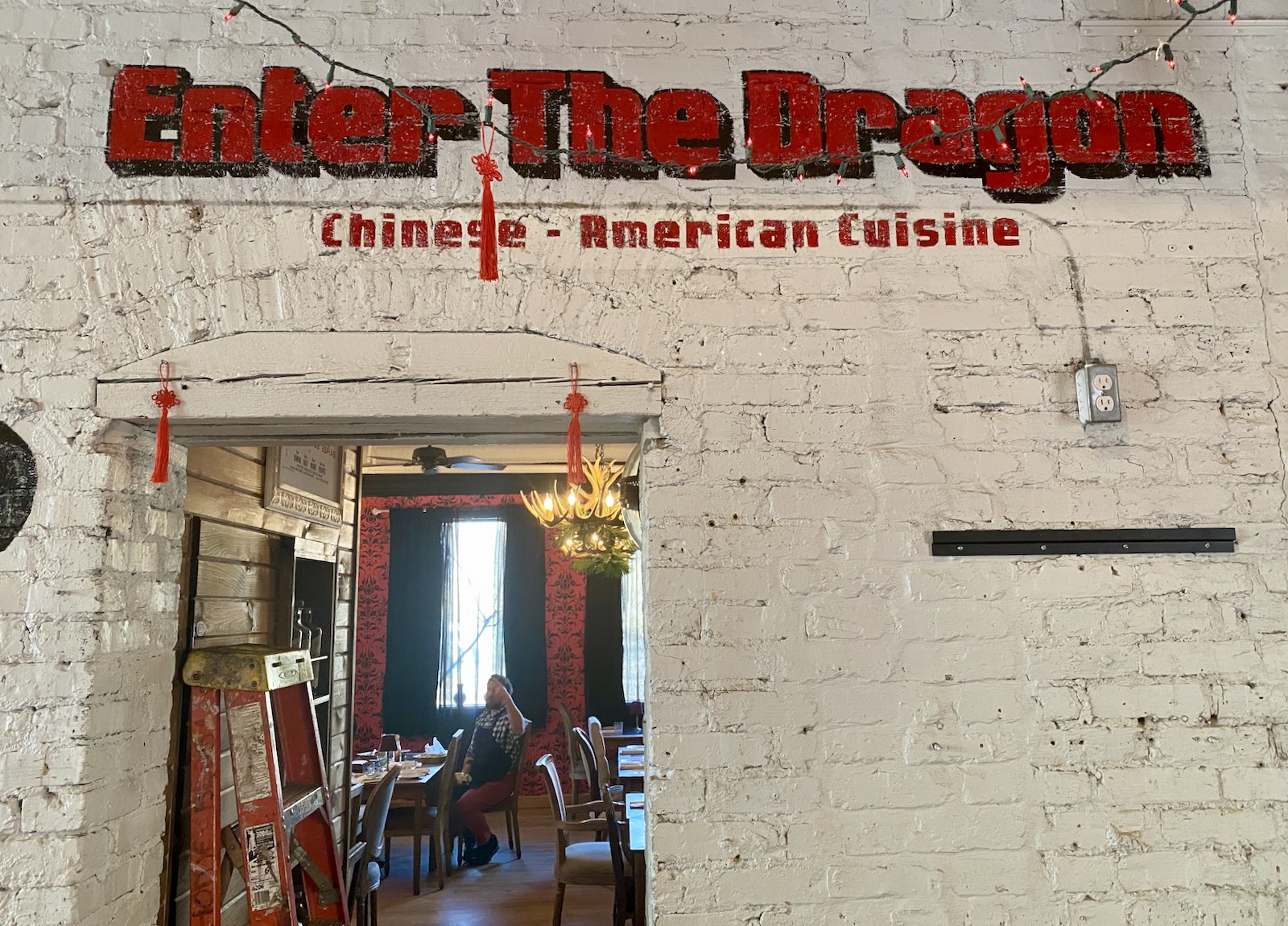 When it comes to process, Cerda says he was presented with a number of ideas and photos; from there, he created a plan for bringing the vision to life.

"I came up with this idea to create this urban art- inspired space that’s inspired by artists like Banksy. I really wanted to create art that was approachable, that people could really take photos with. So, it had to be clean, and it had to pop. I wanted to design it so that while guests are eating, they can look over their shoulder and see something that really enhances the experience."

In turn, you’ll find a number of pieces by Cerda, painted right on the brick walls of the Hotel Madrid bar, including a portrait of Lee standing at Ruby Chow in Seattle, a restaurant where he worked while he was establishing his career in martial arts and acting. 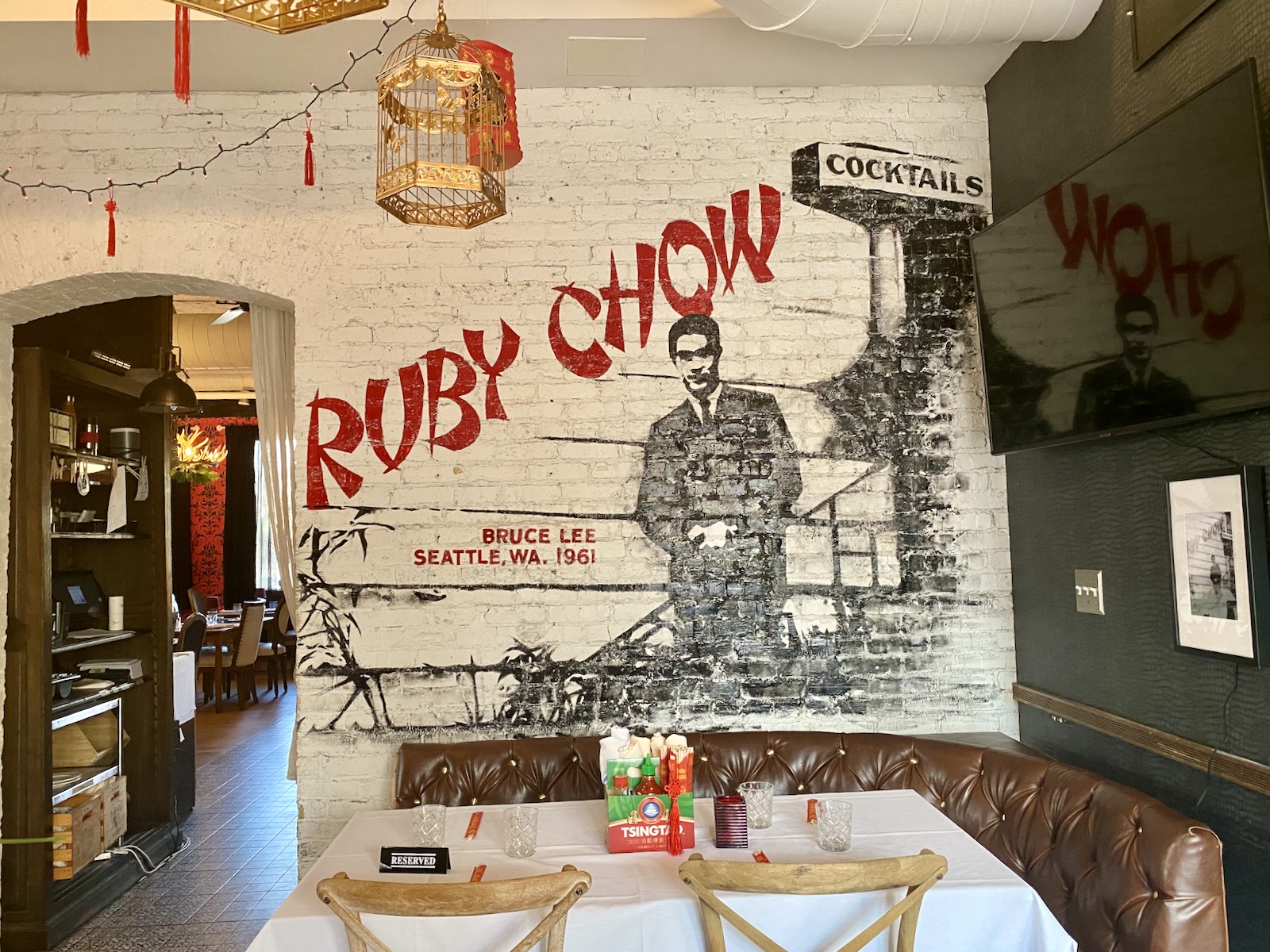 "I love painting on brick," says Cerda. "It’s both forgiving and unforgiving. It’s unpredictable. We were on a tight timeline for the pop-up, so while I wanted to do fully rendered illustrations, this was a good happy medium. The hand painted look really lends itself well to brick, so it really worked out beautifully."

It’s the perfect complement to the Bruce Lee films, including Lee’s final full film "Enter the Dragon", which will be broadcast on the large televisions in the bar.

For more information on Michael Cerda and his art, check out his Instagram Feed at @CerdaDesignCo

It’s all in the details

In addition to the murals, you’ll find countless references to Bruce Lee and his films. Some, including various photographs and framed art, Chinese lanterns and festive dragons hanging from the ceiling, are obvious. 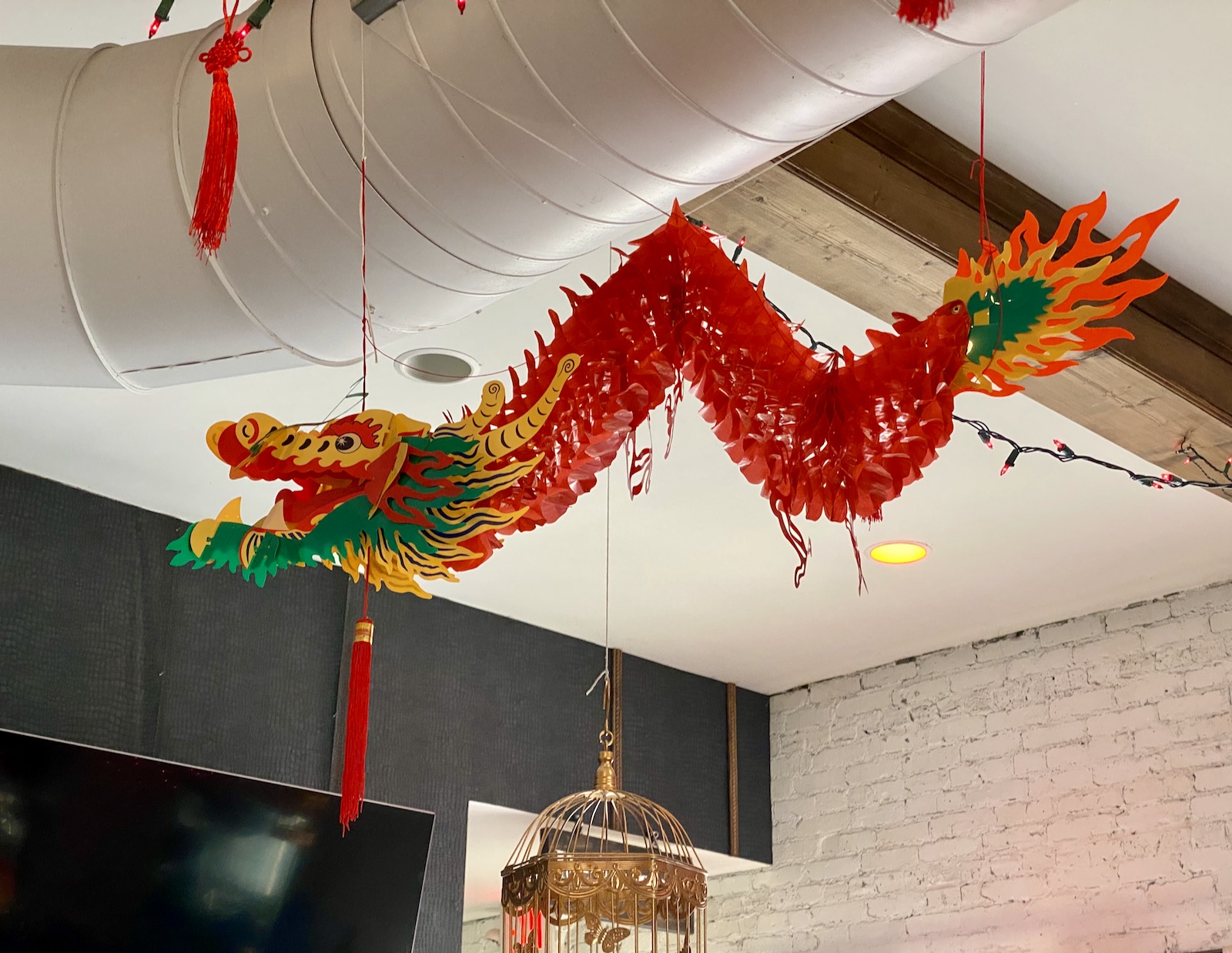 As are the life-sized cardboard cut-outs of Lee, which are both easily recognized and perfect for creating fun, Instagrammable moments. 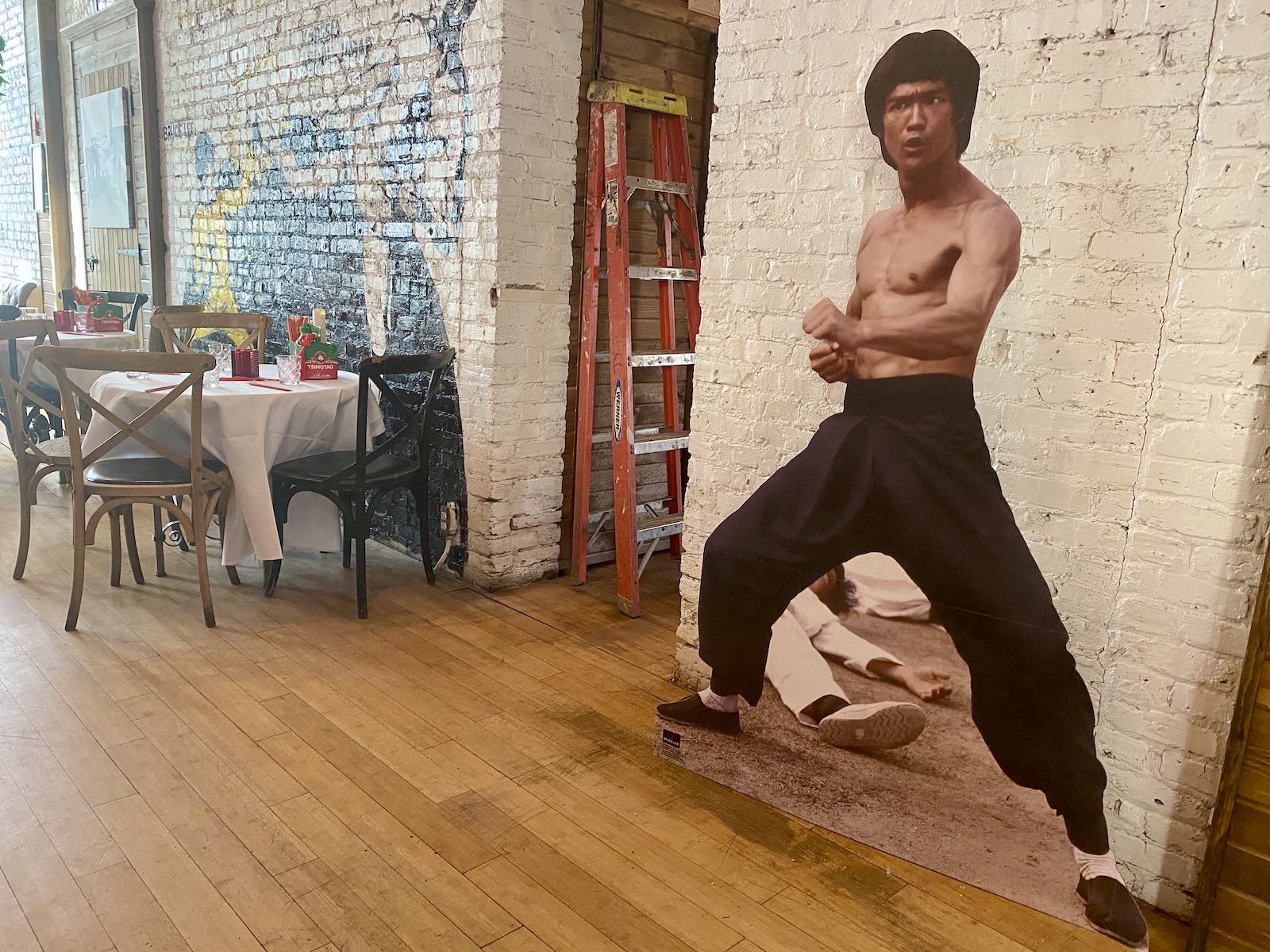 Others are a bit more subtle. Take the bird cages that hang from the ceiling for instance. They’re a nod to the scene in "Enter the Dragon" during which Lee travels to the Island of Han for a martial arts tournament. If you’ve seen the film, you might recall that the welcome dinner for the fighters is held in a room that’s decorated with bird cages filled with birds. 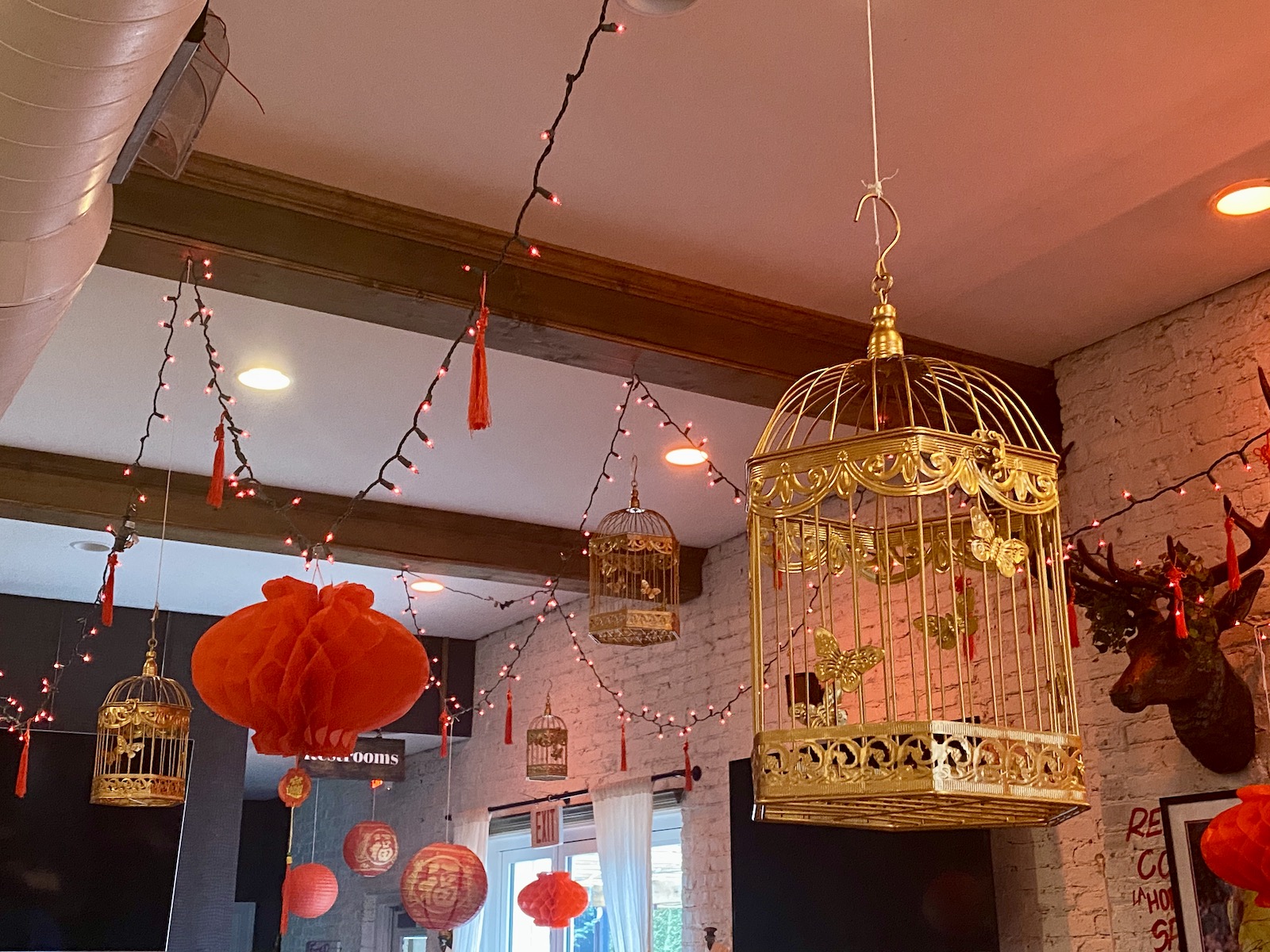 You’ll also find Chinese knots, which are tied and woven from a single length of cord, hanging from the ceiling and adorning the dining tables in the bar. The knots, which date back to the Tang Dynasty era, are synonymous with longevity and express the wish for a long life without setbacks. They’re used for many occasions, but popular during the Chinese New Year celebration. 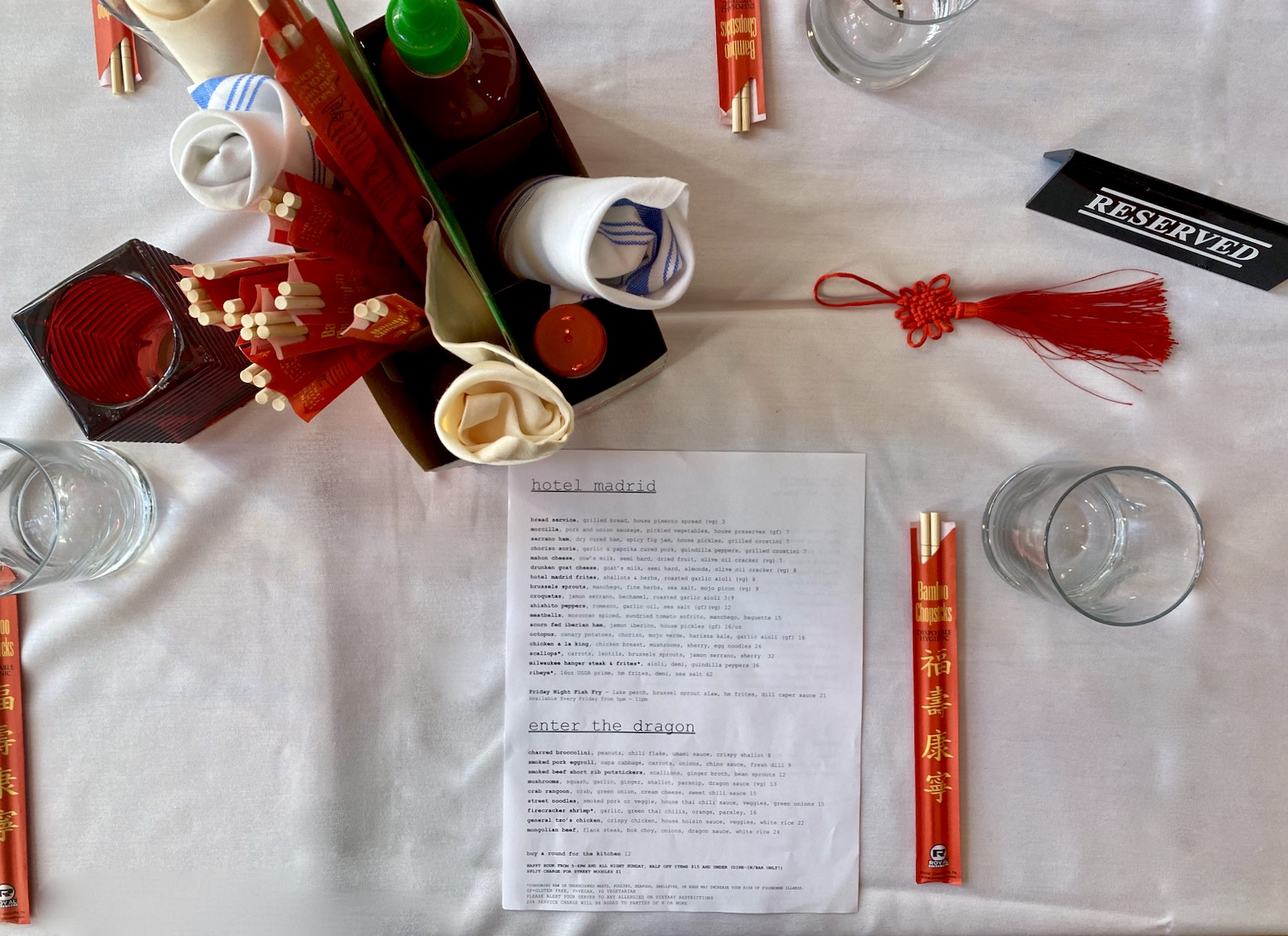 Let’s drink to that 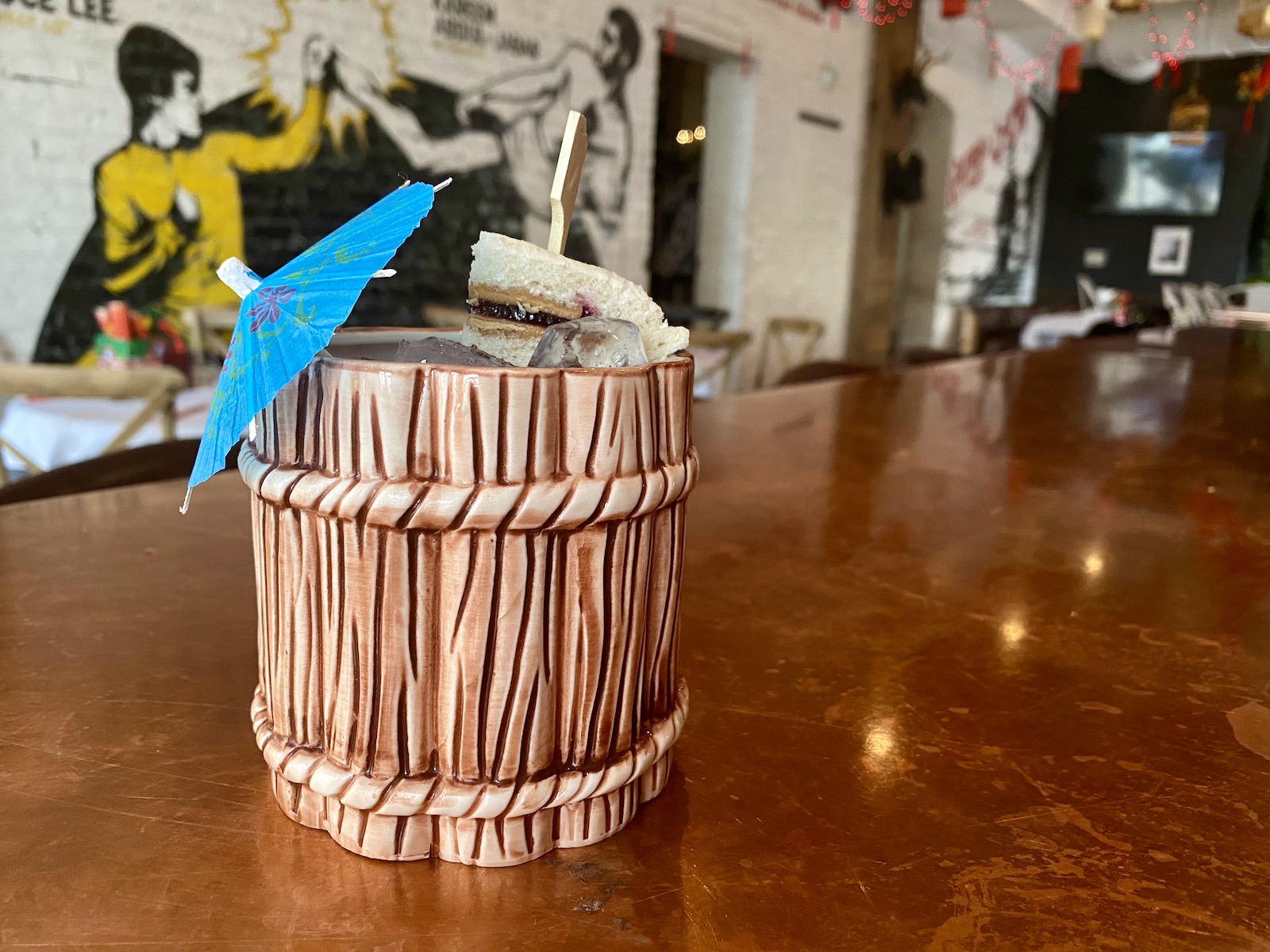 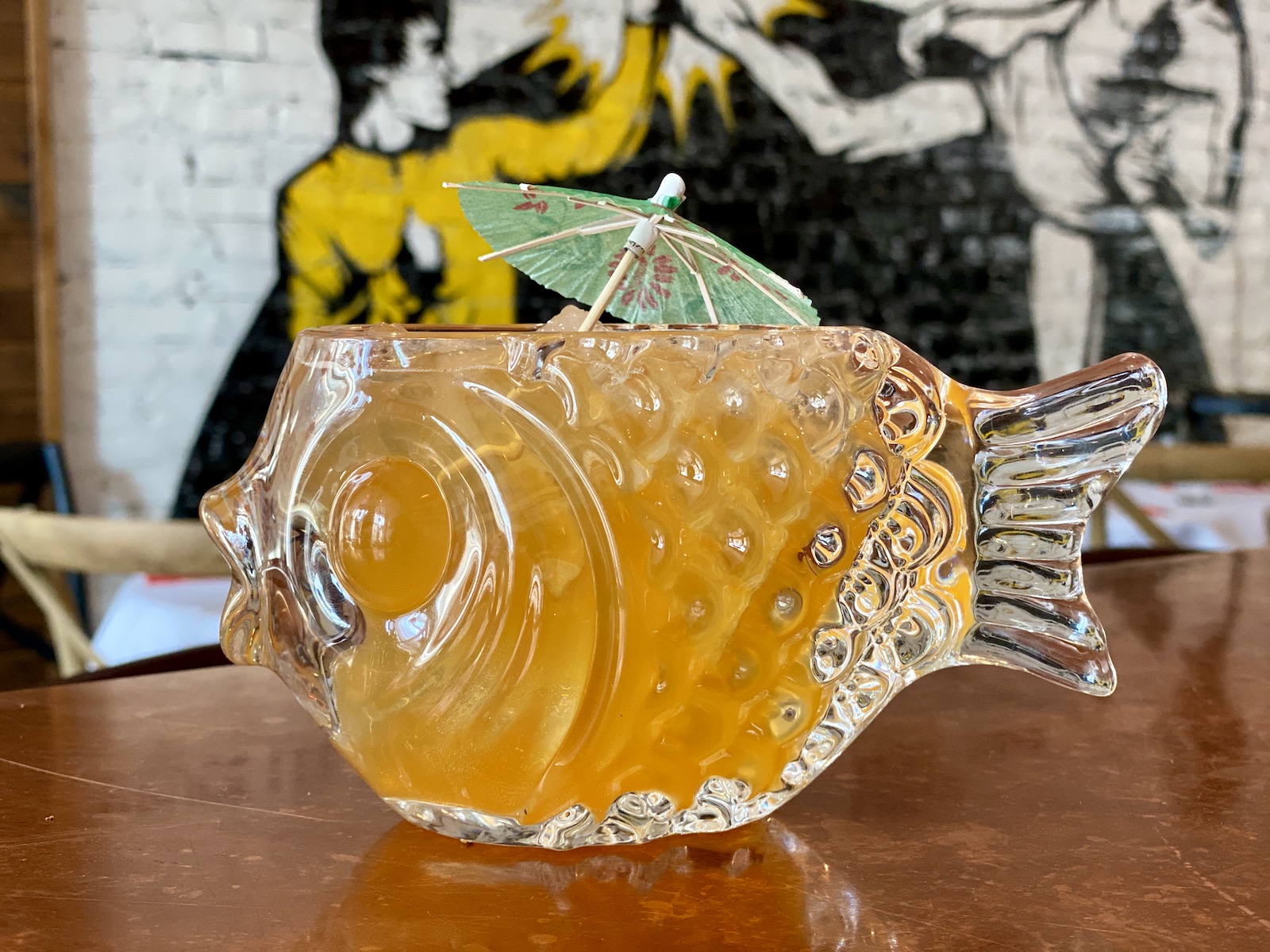 If you want to go all out, you’ll want the Fist of Fury, a flaming masterpiece created with Zaya Rum, lychee, orgeat and lemon ($40; serves four). 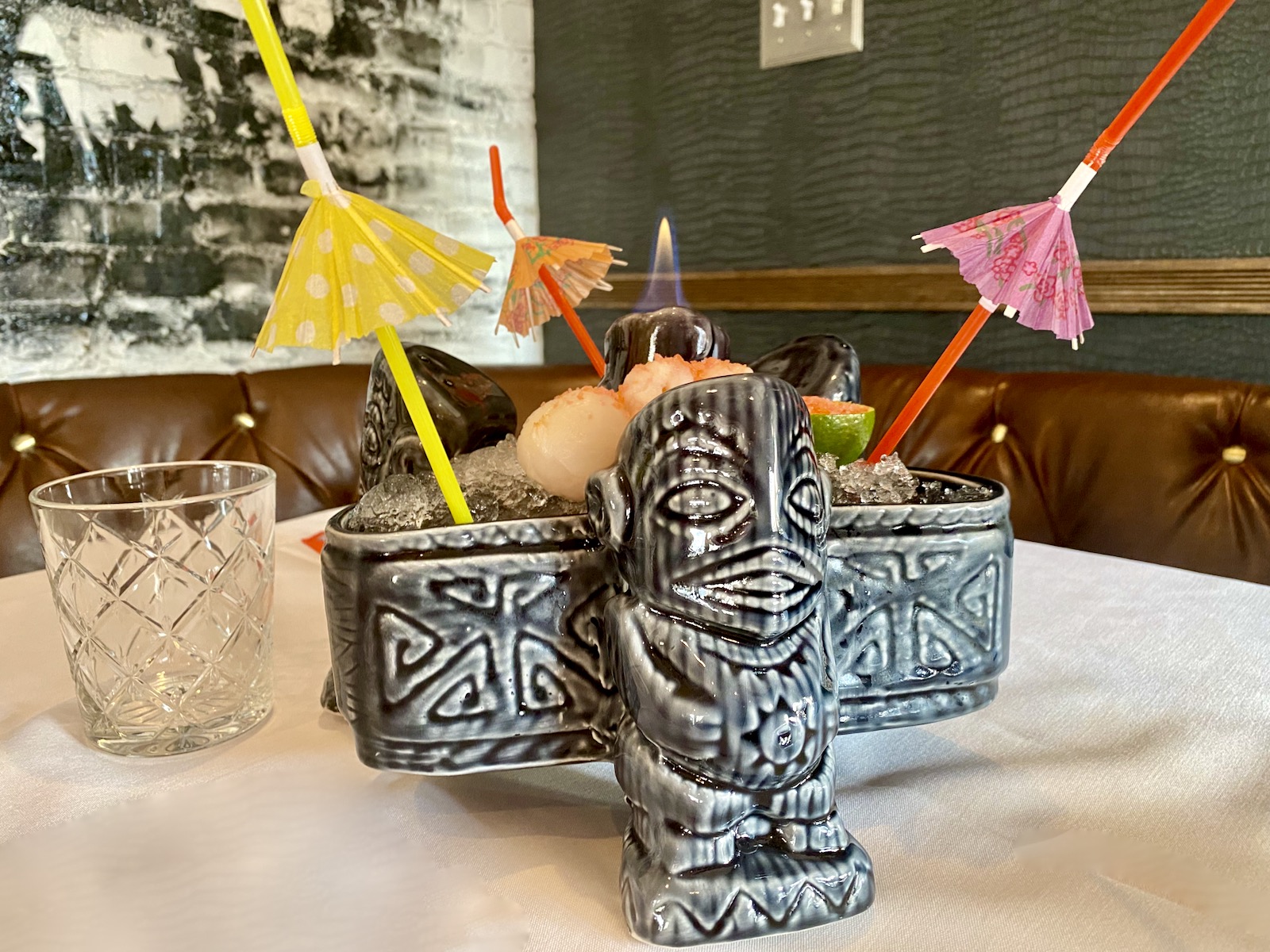 The drink comes complete with a skewer of lychee for munching and a lime half filled with pop rocks that can be added to the drink or taken as a "chaser" of sorts. 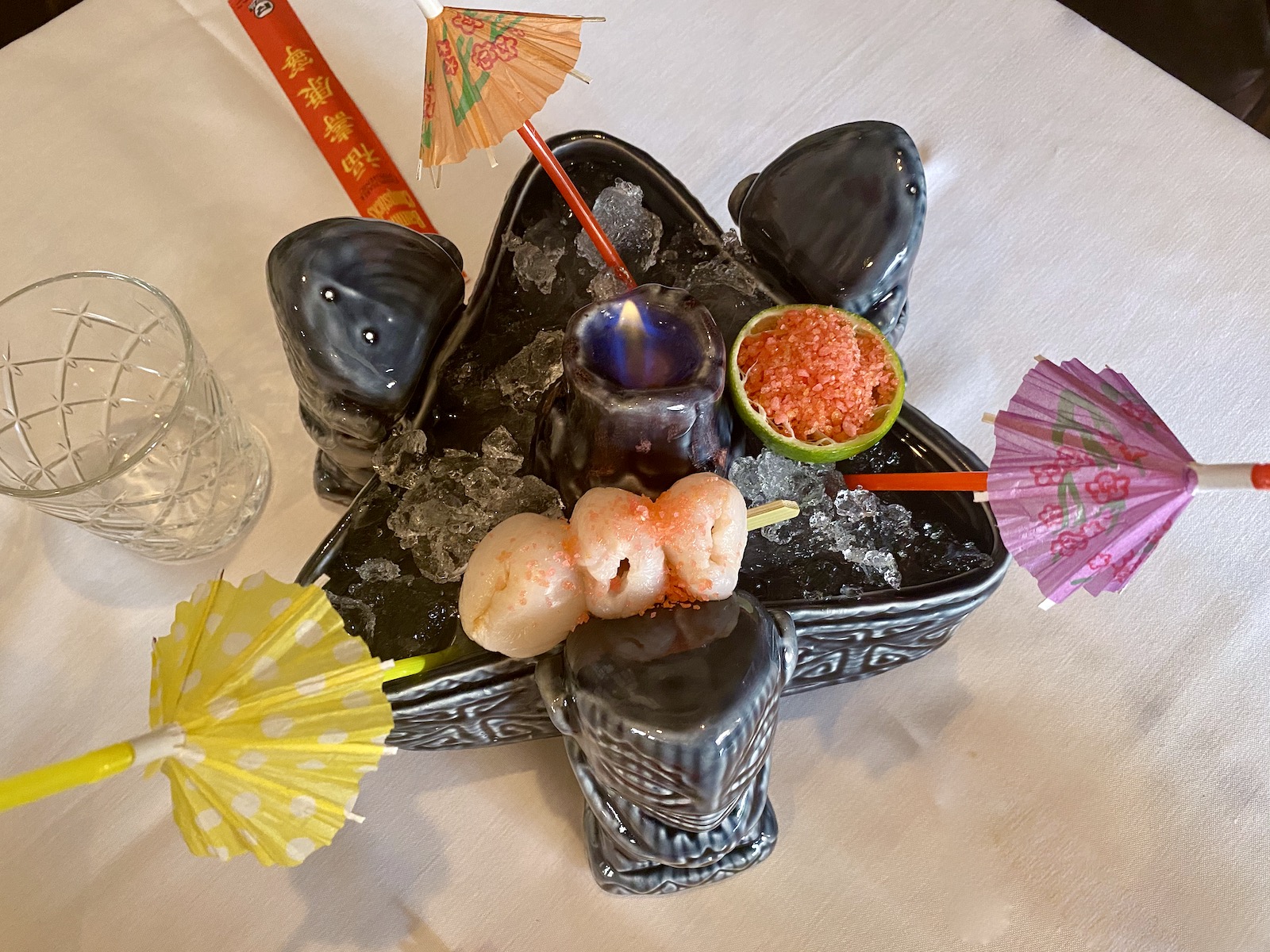 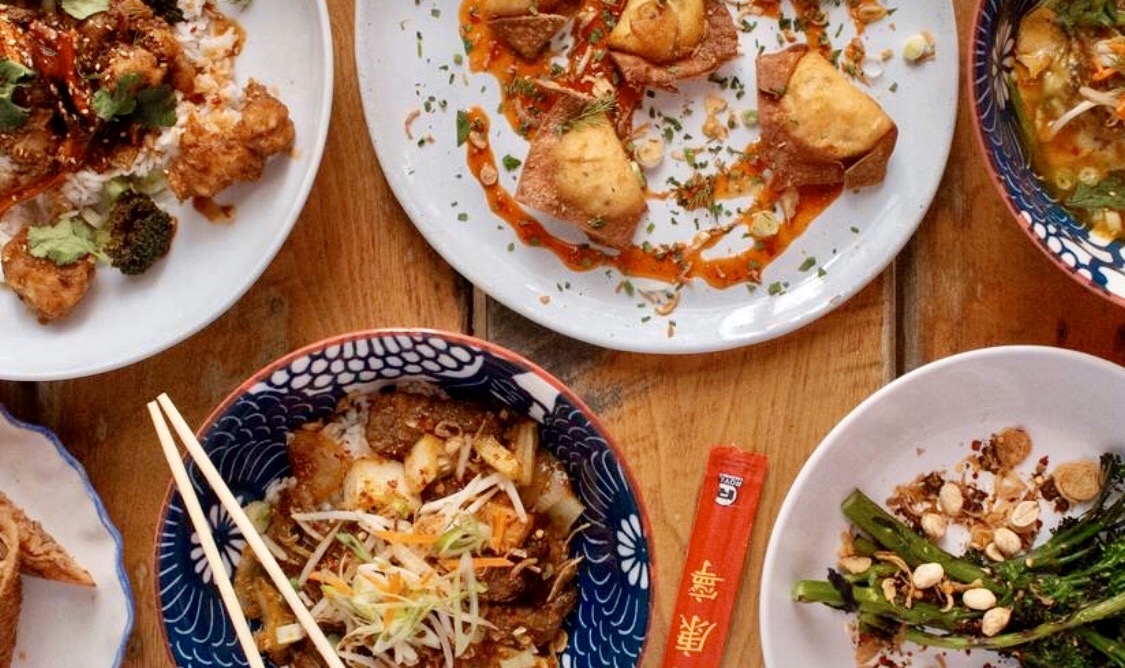 When it comes to designing the Chinese-American menu for the Bruce Lee takeover, Executive Chef Jeff Badders says they looked first at some of the items they wanted to incorporate from the kitchen and existing menu.

"We knew we really wanted to use our smoker and incorporate smoked meats," he says. "And we already had dishes like the broccolini (which incorporates peanuts) and the mushrooms, which originally were served with mojo verde aioli. For the takeover, we’re serving the mushroom dish with dragon sauce, which is made from a combination of hoisin, sesame, brown sugar and Thai finger peppers for heat."

From there, he says, they brainstormed dishes based on their favorite items to order from Chinese-American restaurants. The result? Dishes like General Tso’s Chicken and Mongolian Beef (pictured below). 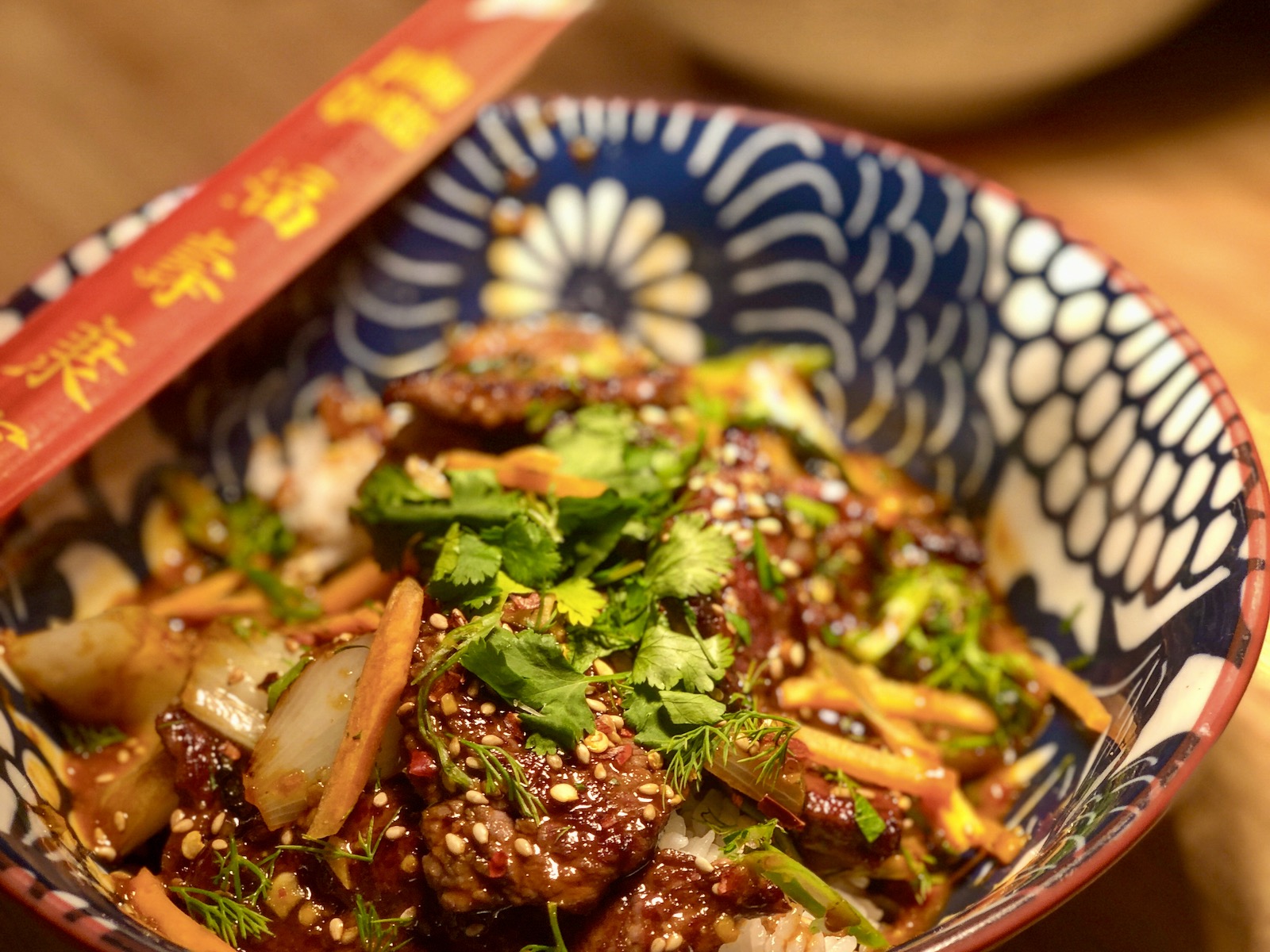 They also incorporated dishes like crab rangoon ($15), a dish which appeared on the Polynesian-inspirerd menu at Trader Vic's in San Francisco during the 1950’s. The recipe, which was allegedly derived from a Burmese dish, became a U.S. phenomenon, eventually appearing on countless Chinese menus.

The Bruce Lee takeover lasts through Feb. 10. Tune in to Hotel Madrid's Facebook and Instagram feeds for updates and information about contests related to the Enter The Dragon takeover.