Collaboration can create a better fix for tough East Side intersection

Columbia St. Mary's has floated the idea of building a skywalk over Prospect Avenue, just north of North, to connect the Prospect Medical Commons with Columbia St. Mary's Hospital across the street. Neighborhood collaboration can create a better plan.

On Nov. 9, the Historic Water Tower Neighborhood passed a resolution opposing the plan, pointing out that urban planners have soured on skywalks because of the damage they do to neighborhoods and retail areas by removing pedestrians from the street, among other concerns.

"The proposed Columbia St. Mary (CSM) skywalk over N. Prospect Ave. would change the character of our residential neighborhood and create a visual barrier, no matter how well designed ... could reduce visibility for drivers and endanger pedestrians, near a school and a number of stores and offices, and would encroach on a public sidewalk," the resolution notes.

That resolution – which has drawn support from the Murray Hill Neighborhood Association – also suggests a subterranean solution. 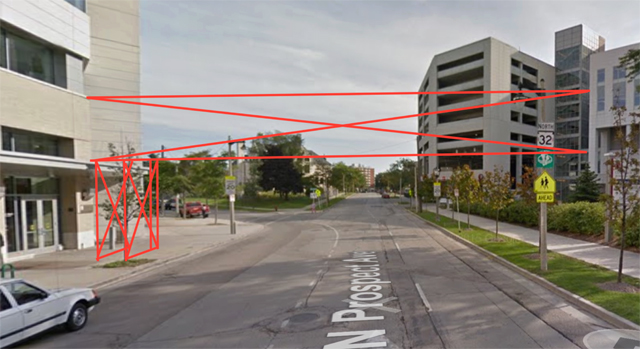 A simple blocking diagram shows the siting of the potential span.

"CSM has previously agreed in writing not to build a skywalk over N. Lake Dr. and instead built a tunnel beneath that street. ... HWTN strongly supports CSM staff and patients having access between buildings, as it did in the N. Lake Dr. case, therefore, Historic Water Neighborhood opposes the proposed skywalk and encourages the City of Milwaukee to deny any needed approvals for such a plan and encourage an underground alternative."

I contacted Ald. Nik Kovac, and he said, "Like a lot of the neighbors, my opinion is still forming. The architect, Jim Shields (of HGA), made some changes in response to neighbor concerns which improved design. But many people object on the grounds that skywalks pull pedestrians off the street, and pedestrians on sidewalks are good for commercial corridors.

"The CSM board still has not made a final decision on whether to apply for zoning change. It's possible they will balk at the price tag, which is considerable."

Jim Plaisted, executive director of the East Side BID, said that he’s taking a wait-and-see approach for now.

"The BID board has heard from CSM about the skywalk proposal and is not overly concerned," he noted. "The architectural review board will discuss with CSM when they are ready to move forward sometime next year – internally, it’s not funded yet."

Columbia St. Mary's spokesman Evan Solocheck said Tuesday that there is nothing moving forward at this point, and it’s unclear whether or not the skywalk will even happen.

"There isn't much to report at the moment," he said. "We're still looking into it, and there are a lot of things up in the air at the moment. We’re not sure if we’re going to pursue it or not. We should know more in early 2016."

This is an issue that, as a member of the Maryland Avenue Montessori School Governance Council and a frequent pedestrian (and driver) on the East Side, I’m watching closely.

I intimately understand the traffic issues at that intersection where Maryland Avenue splits off of Prospect Avenue. In fact, a school staffer has been hit there – thankfully not badly injured – and watching parents and their kids dodge the traffic that comes flying around the corner can be heart-stopping.

But a skywalk is no solution.

First off, it will serve a small sliver of the population that uses that intersection. How about a street-level solution to the traffic flow there that can help protect the school community, Whole Foods customers, hospital and clinic staff and patients, and ALL pedestrians?

As the HWNA resolution hints, it’s possible that the supports for such a skywalk could even further diminish visibility for pedestrians and drivers at an already challenging spot.

Secondly, as HWTN points out, skywalks serve to diminish a neighborhood’s vitality by removing pedestrians from the street, pulling them away from retailers and from the kinds of interactions that make a neighborhood vibrant.

Thirdly, Maryland Avenue School is a landmark work of East Side architecture – designed by four respected Milwaukee architecture giants: Henry Koch, Herman P. Schnetzky, Eugene Liebert and Richard Philipp – and has been visible, unobstructed from the south – other than by the occasional tree – since it was built in 1887 (and the same was true of its predecessor for a dozen years previous).

Columbia St. Mary’s saw the light in a tunnel on Lake Drive, so why not here? Of course, a little pre-planning could’ve solved this all nearly 10 years ago when both the new hospital wing and the clinics building were being erected. That surely would’ve been the time to create a connector.

But it’s not too late now.

I hope the parties can come together to create a solution that ensures the safety of everyone using that intersection.