We caught up with Chef Nell Benton this past March, and she gave us a lesson in ramen -- dishing up secrets of her fresh ramen noodles and unctuous tonkotsu broth. What we couldn't tell you at that point was that Benton was in the process of writing a book on the topic.

We caught up with Chef Nell Benton of The National Cafe this past March, and she gave us a lesson in ramen – dishing up secrets of her fresh ramen noodles and unctuous tonkotsu broth.

What we couldn’t tell you at that point was that Benton was in the process of writing a book on the topic. The "Ramen Fusion Cookbook" published by Dorling Kindersley (DK), will be released on Oct. 6.

The book, which contains 40 mouthwatering recipes, also provides detailed background on the origins and variations of ramen, drawing from Benton’s intensive research. 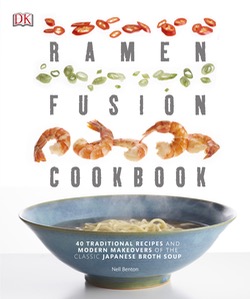 "The book is geared toward the home cook," says Benton. "But I feel like it’s now a dish that’s being put on so many menus that I’m hoping it appeals to people across the board, including chefs and people who simply love eating it."

Cooks will find detailed instructions for making various ramen broths, including pork, chicken, vegetable and dashi varieties. Step by step instructions will illustrate how to make Benton’s deliciously buoyant ramen noodles, as well as how to morph packaged noodles into something better. And the book also includes numerous recipes for a wide variety of creative ramen options using nontraditional ingredients like curry, harissa and Indonesian sate.

The bulk of Benton’s hands-on work consisted of recipe testing. She made recipes over and over again until she felt they were ready to be submitted for testing through the publisher’s recipe testers.

"There were some that I felt really comfortable with right away or after two or three tries," she notes. "But there were some – like one of the dipping ramen – that took a number of tries to get it exactly the way that I wanted it; I tried a lot of different toppings, trying to determine what went with it."

But, Benton says that, once she nailed the recipes for the noodles and the main broths, building the recipes from that point on was easy.

"I was working with ingredients that I love," she says. "And since it was fusion, it was anything goes."

She says that, surprisingly, one of her favorite recipes turned out to be one with a miso-soy milk broth.

"I’m not even a fan of soy milk," she admits. "But, it’s so delicious. There’s this salty savory miso flavor with just a little bit of creaminess to it that’s just really really nice."

"Along the way, working with the stocks and ingredients really gave me the opportunity to improve what I was doing at the cafe. I made lots of tweaks to my tonkotsu ramen broth, including adding the vegetables later in the process for the stock."

She says she enjoyed the opportunity to work with such intensity on a singular topic.

"Being a chef owner, you’re pulled in a lot of directions and you can’t usually take time to be that focused," she explains. "So, having my capable staff really take the reins and being able to concentrate in full on the work for the book, that was the best thing that came out of this. I haven’t been able to focus on something so intently for a very long time."

Benton says that, in addition to being able to dive headlong into the material, she also found the research component to be both fascinating and challenging.

"Finding out about the various types of ramen and their history in Japan was extremely interesting," she says. "There’s really not very much written about ramen; and what exists is often conflicting. But, it was fun to wade through everything that has been written and pull it together in a way that brings more clarity to the story."

Her work culminated in a trip to Japan last May, during which she was able to double check details she had included in the book, as well as taste and compare a wide variety of ramen.

Her trip took her to Kyoto, Osaka and Yokahama, where she reveled in the sights and sounds of Chinatown, while eating her way through the city.

"Overall, my trip validated the work I’d done and brought the work full circle," she says. "I did find that the tonkotsu ramen in Japan is much fattier than what we typically make or eat in the U.S. It’s usually eaten after drinking, and there can be up to an inch of fat floating on top of the broth. Delicious, but way too rich."

Benton says she had no idea what to expect when she initially started the book, but in the end she loved the process.

"The deadlines – they were crazy, and I lost a lot of sleep. But, there was also kind of a thrill in meeting them," she says. "The most surreal part of the whole thing is knowing that there’s actually going to be a book out there with my name on it. I feel like I can’t call myself an author until the book is actually in my hands and the authorship is tangible."

Copies of "Ramen Fusion Cookbook" will be available for purchase at The National Cafe starting in early October.