Slip into something comfy and casual at this Walker's Point spot that looks a bit like a cleaned up version of a corner tap. Grab a sandwich and a beer or enjoy old school arcade games like Ms. Pac-Man.

Slip into something comfy and casual at this Walker’s Point spot that looks a bit like a cleaned up version of a corner tap. Old school arcade games like Tapper, Ms. Pac-Man and a vintage Elton John pinball machine sit in a back corner, while a large bar and high top tables provide seating. 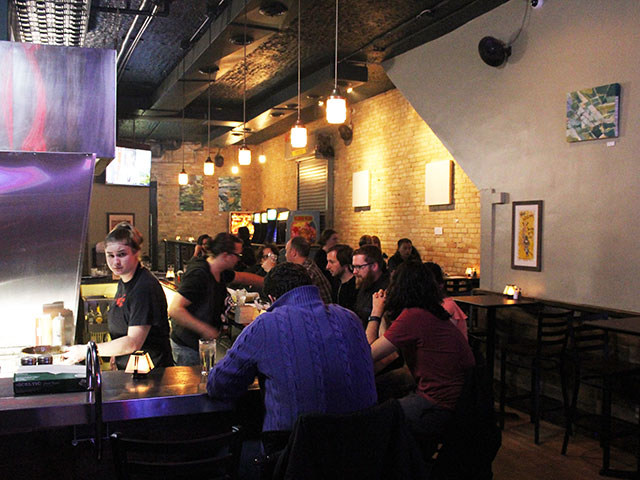 Elevated bar food runs on the creative side with options like a Brussels sprout grinder with apples, cheddar and walnut spread and a deli sandwich with mortadella, provolone, beer mustard, pickled red onion. Classics are also in the house, with options like fried chicken with pickle, tomato and kewpie mayo, grilled sausages and a respectable burger. And sides – including fried cheese curds, wings and delicious beer cheese soup don’t disappoint.

Type of food: Bar style fare, including snacks like soft pretzels, cheese curds and wings, along with a variety of sandwiches.
Prices: $6-11 for sandwiches; $4-8 for appetizers.
Vegetarian friendly? Yes. Sandwiches include vegetarian options like a Reuben made with roasted beets as well as a Brussels sprout grinder.
Hours: Monday 11 a.m. to 4 p.m.; Tuesday through Thursday 11 a.m. to 2 a.m.; Friday 11 a.m. to 2:30 a.m.; Saturday 3 p.m. to 2:30 a.m.; Sunday 3 p.m. to 2 a.m.
Parking: Street parking available on South 2nd Street and Virginia.
Vibe/dress: Casual. Bar atmosphere with high top seating, old-school arcade games and a television to watch the game.

In addition to sampling a number of options on the really nicely curated craft beer menu (a number of which the server was kind enough to let us sample first), we started with a variety of bar snacks, all of which hit the spot in terms of both quality and flavor. The wings, which were quite tasty, came in three flavors:  green (which reminded us of salsa verde), sweet (both sweet and a bit sour from cider vinegar) and angry (flavorful and genuinely blazing). Meanwhile, soft pretzel came studded with sesame seeds with a side of serrano pepper sour cream. The pretzel was soft and warm, and the sauce evidenced flavor from the serrano, though not a lot of heat; so, it’s perfect for someone with a sensitive palate. 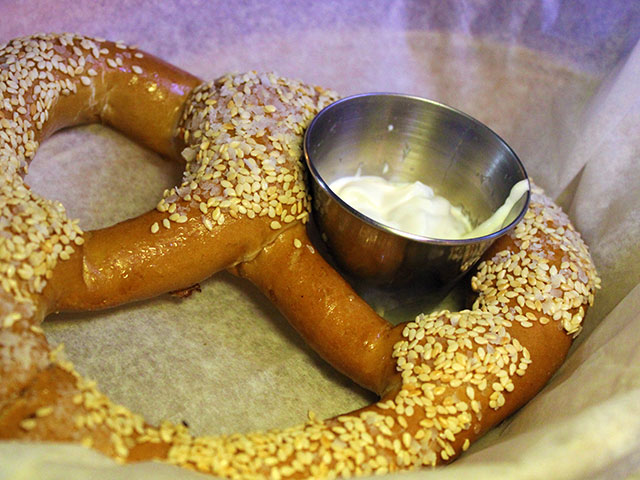 Clock Shadow Creamery cheese curds breaded with rye crumbs and served with "Russian" dressing were also delicious. The dressing was a dead ringer for Thousand Island, so while we might argue over semantics, it was a nice match for the crisp gooey curds. 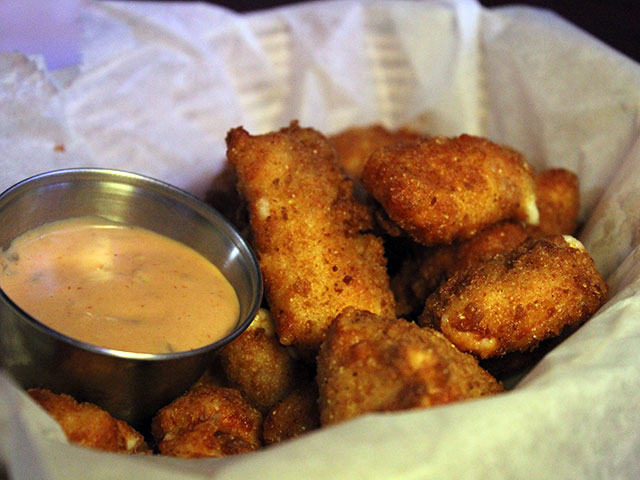 The Camino burger featured a tender, flavorful patty with melty American cheese and grilled onions on a bun that was soft, yet held up to the ingredients. 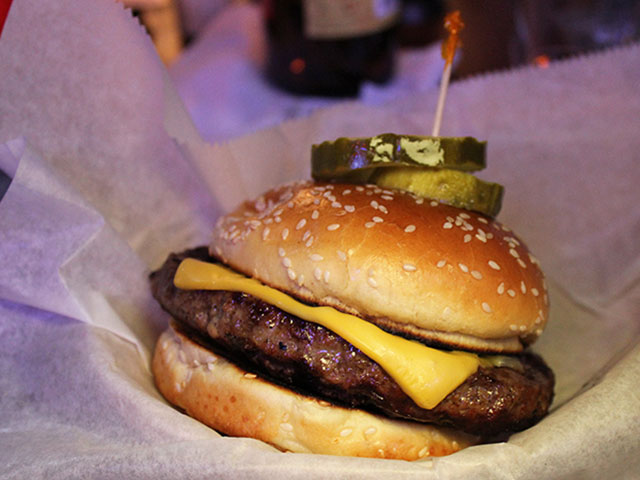 Meanwhile, the beet Reuben got points for creativity. While it’s not a dish that would win over a non-beet-lover, it was a delicious combination of beets, sauerkraut, melty Swiss cheese and just enough dressing to offer flavor. At least one of us thought it could have used a bit more filling to optimize the flavors, but overall it was a good vegetarian take on a classic. 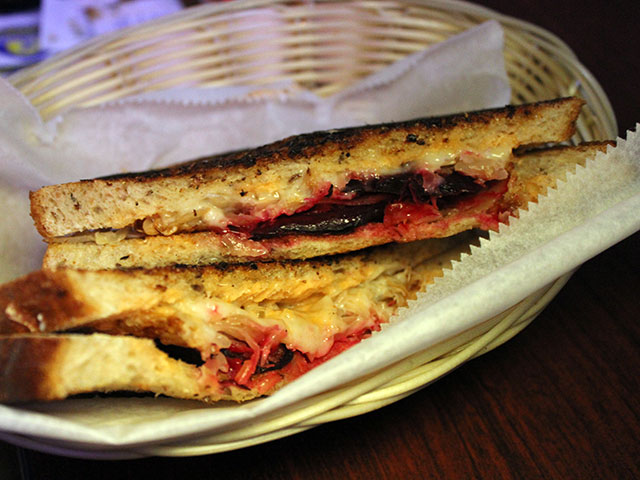 The Kimcheese was another vegetarian option that didn’t disappoint. A bit more kimchee amidst the gooey cheese would have been great; but it was a solidly creative sandwich that satisfied with a side of delicious handcut fries that we’d order again and again (next time we'll get them covered with housemade chili). 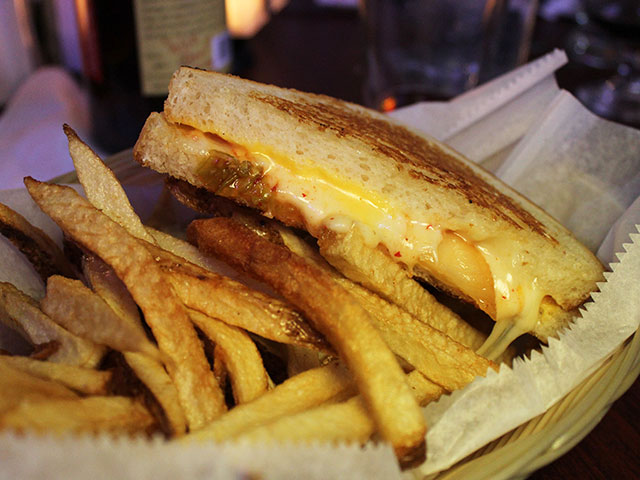 The ribeye sandwich was also a winner featuring Swiss cheese, beer mushrooms and fried onions. We didn’t pick up too much on the brown sugar in the sear; but the meat was tender, and the mushrooms and onions were generous and added nice flavor.

Dessert options are limited but delicious and include an adult root beer float with double vanilla Purple Door ice cream and Not Your Father's root beer, along with a rotating selection of delicious pie (ours was sweet potato) from Mr. Dye's pies, served a la mode. 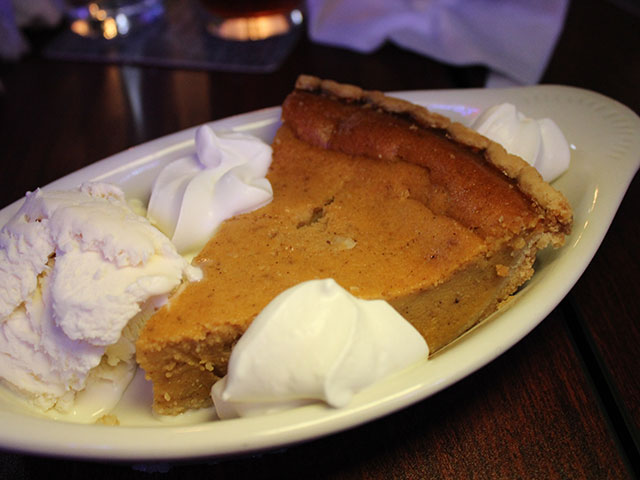 Despite a relatively positive impression of the food, there were some inconsistencies to work out. For instance, although we were asked how we wanted our burgers cooked, we found that both came back slightly more done than requested, most notably the medium burger which was closer to well done. Another sandwich came inconsistently grilled, with a crisp browned exterior on one side, but a barely grilled look on the other.