Noticing ripples growing in your water glass? You guessed it: The T. rex and the rest of his scaly friends are on their way to Milwaukee - and while it may be an Ice Age outside these days, inside the Fiserv Forum, it'll be just like the Cretaceous Period with "Jurassic World Live Tour."

Noticing ripples growing in your water glass? You guessed it: The T. rex and the rest of his scaly (and apparently very not extinct) friends are on their way to Milwaukee – and while it may be an Ice Age outside these days, inside the Fiserv Forum, it'll be just like the Cretaceous Period as "Jurassic World Live Tour" roars into the arena this weekend.

Before the dinosaurs bring down the house (one can only hope not literally, but anything's possible with a T. rex), we got a chance to peak behind the scenes and under the skin of these amazing reptiles and learn how they come alive from the people pulling their strings. And in the process, we learned five reasons why this will be a can't miss show.

1. It's not just the greatest hits 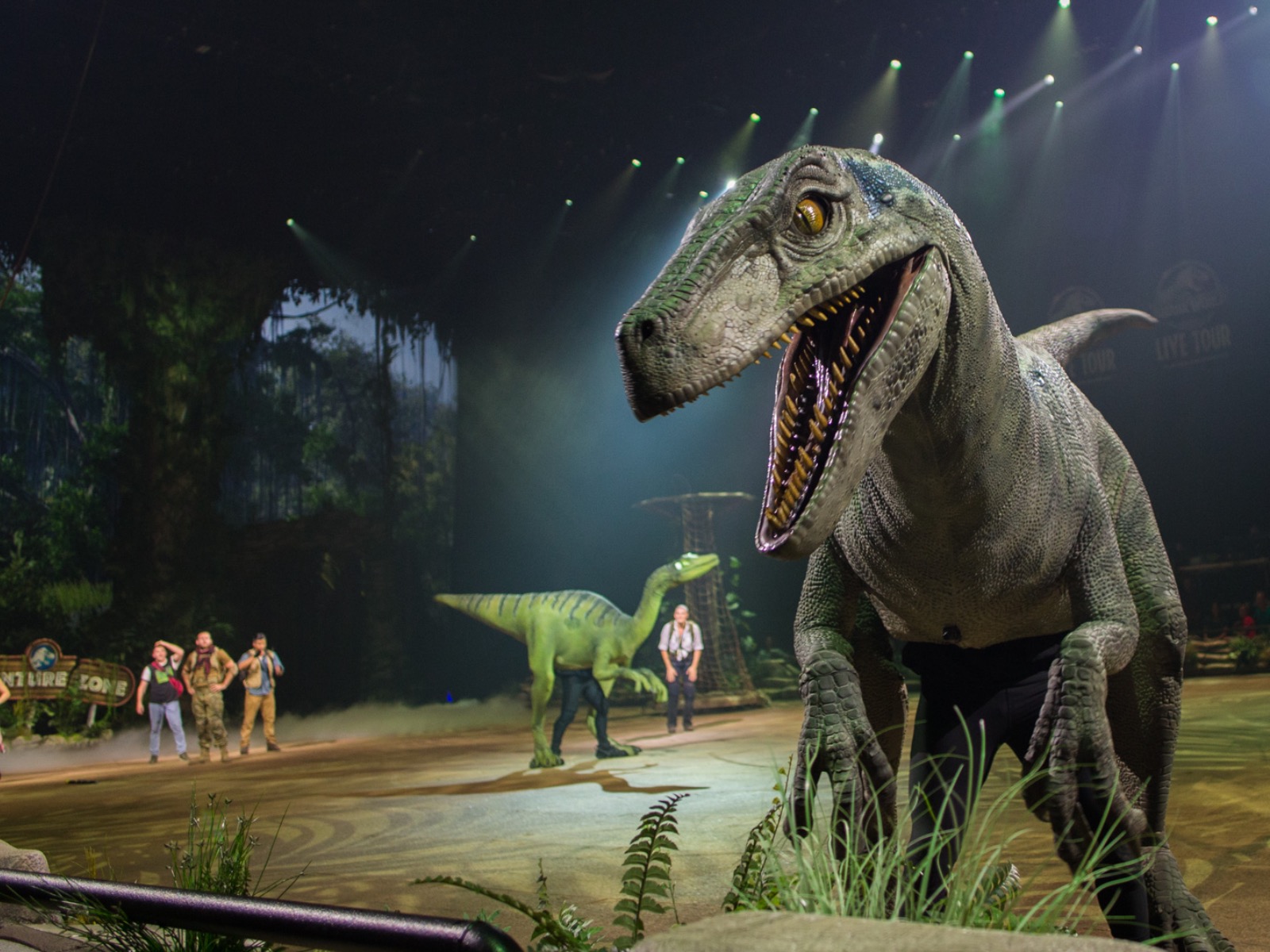 Seeing dinosaurs alone is quite the spectacle – but "Jurassic World Live Tour" goes behind just showing you these scaly wonders. You get a legitimate story, actually involved in the universe of the "Jurassic World" franchise – complete with Amblin and Universal working with and providing the actual creature designs, branding and creature effect from the hit films.

Taking place between the last two movies, "Jurassic World Live Tour" follows a crew of scientists – led by Dr. Kate Walker – heading to the recently decimated Jurassic World theme park (thanks a lot, Indominus rex) to save a new breed of dinosaur from a brutal fate.

"I like the fact that we're taking a movie franchise and taking another story with it," said dinoteer Enrique Escajeda. "The fact that we're adding to the canon, rather than just rehashing something or saying, 'Here are some highlights and we'll toss some stuff at you; see you later, have a good day.' It's actually adding and contributing something – and that doesn't happen a whole lot in the live event arena."

So consider this like "Jurassic World 1.5," not just a random glorified parade of your old prehistoric friends and foes. 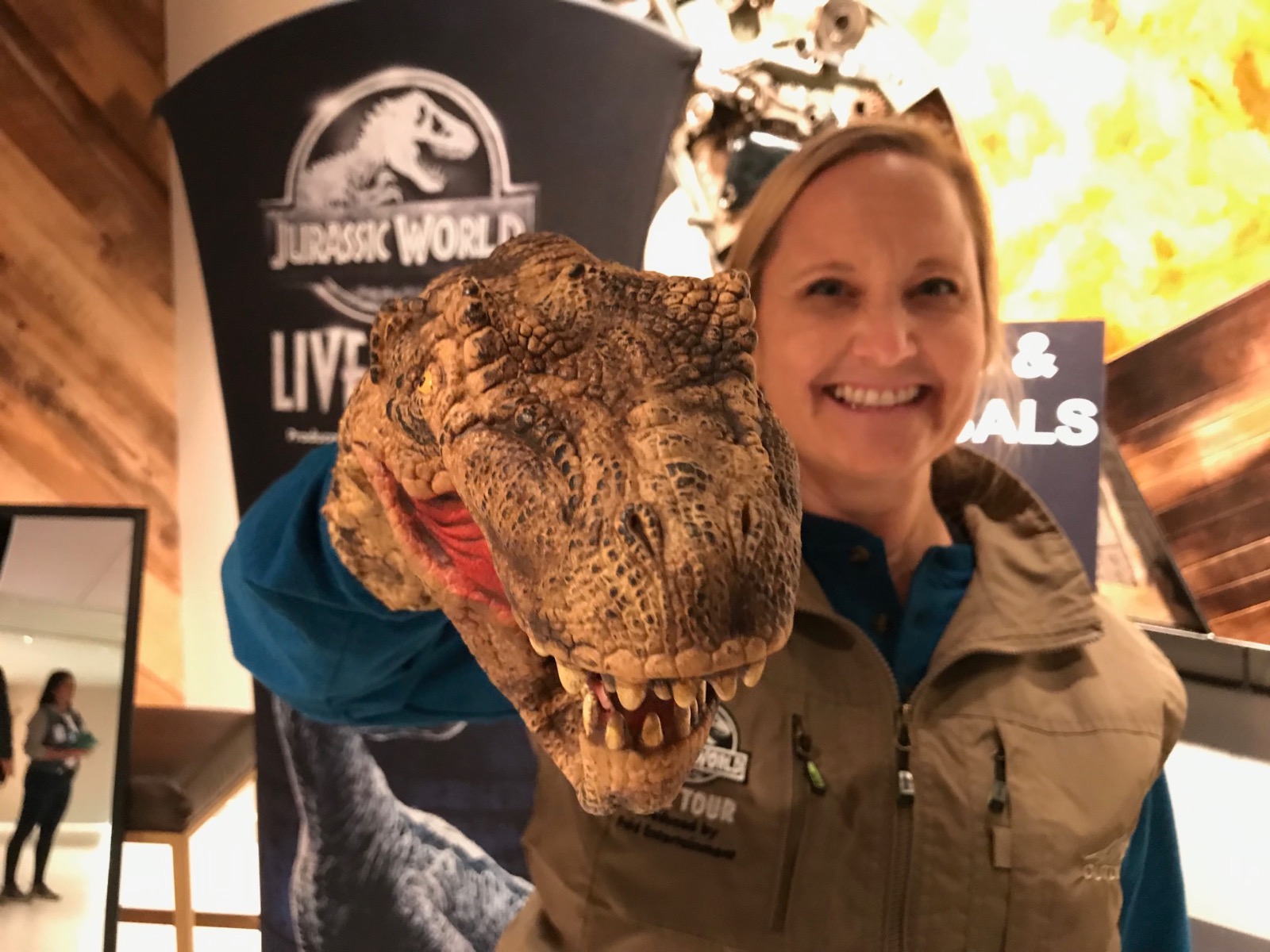 Sure, it doesn't require finding a miracle mosquito caught in some amber, groundbreaking crazy DNA science and the daringness to stare a T. rex in the face ... but it still requires a lot of work and a lot of talented people to bring the dinosaurs back to life for "Jurassic World Live Tour."

To start, the tour scoured several cities across the country, auditioning more than 1,000 people to find the right talented crew of creature puppeteers to provide as their dinosaurs' heart beats. It was a process that searched for people skills, athleticism, strength, endurance and more, requiring wannabe dinosaurs to show off their acting skills, martial arts skills – after all, there are a number of action scenes – and more through an obstacle course, workshopping with weights and playing with hand puppets. No, seriously – playing with puppets.

"In the casting forum, we have them emulate how to be a dinosaur – because if you can do emulate a dinosaur with a puppet, then you can probably be a dinosaur in the show," said Kori Kirschner, athletic trainer for "Jurassic World Live Tour."

"We watch how they utilize their body, and there's a soundtrack, so they're roaring and sniffing and moving."

In the end, 27 people were selected for the show – but, of course, making the show is just the start of the work. The dinoteers learn how to inhabit a dinosaur, learning how to look like a prehistoric creature and display an animal's thought process, as well as even emotions and character traits, through small gestures and movements – all while also working alongside the dinosaur noises and roars that we all know, recognize and, in the case of the carnivores, fear.

"We have some guidelines to give you a little bit of an idea of what these animals might be like, but the way I always see my raptor as a horse mixed with a chicken, mixed with tiger," said dinoteer Austin Paz. "You're curious. You're a little bit jerky like a chicken would be. You have a long neck and body like a horse – but you're also definitely the top predator, the one in charge, so you scan and see your prey."

"We're constantly listening to the show track, and we have to bring the sounds to life with our animation," added dinoteer Skylar J. Keck. "I love the sounds. I love being able to animate and bring those different sounds and nuanced things to life.

"That's really fun – but also you get to act as a dinosaur. You get to bring this dinosaur to life, and that in itself is just the coolest." 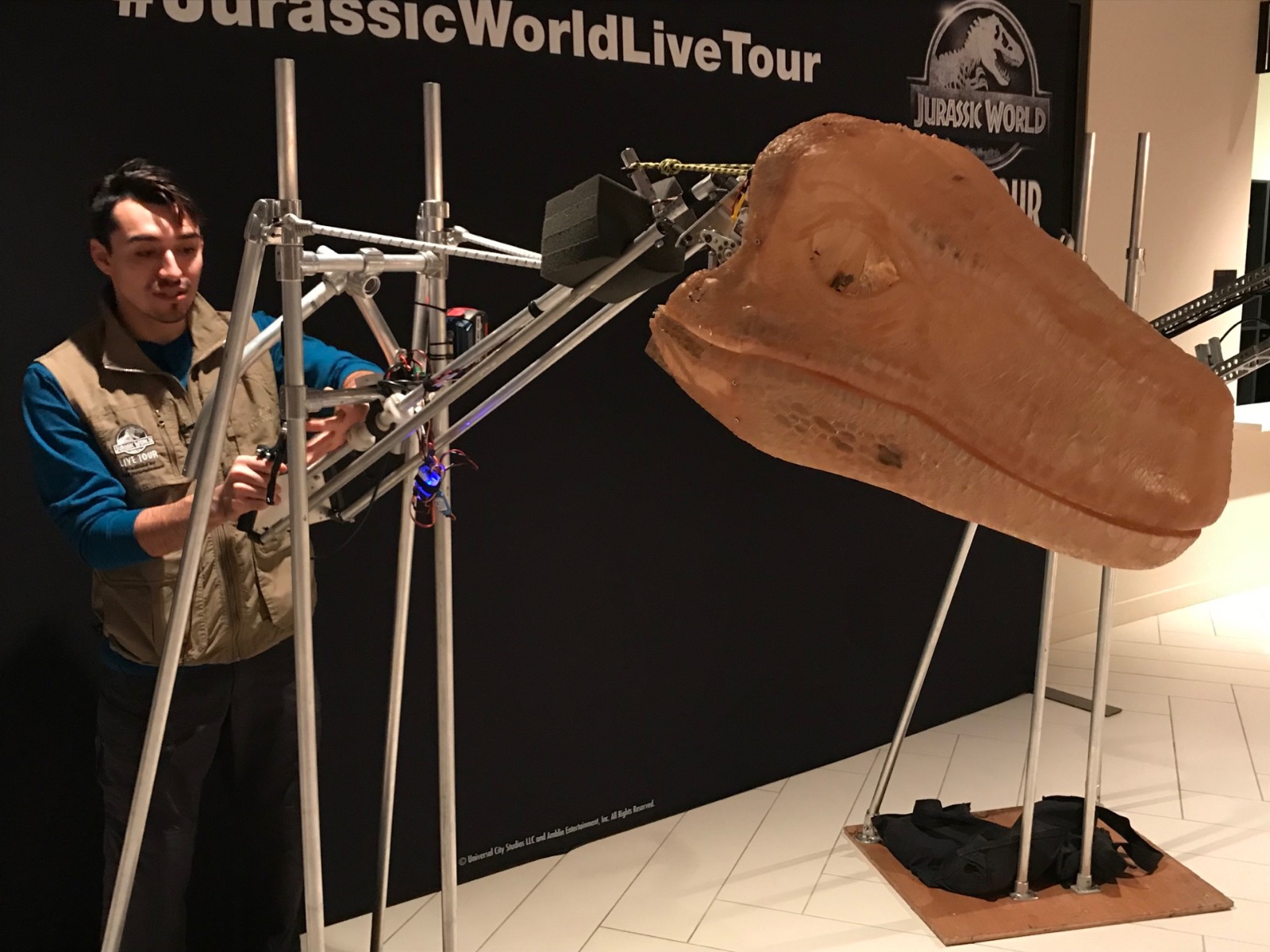 In case it wasn't enough of a challenge to get into the character of a prehistoric lizard that hasn't walked the planet in millions upon millions of years, the dinoteers also have the weight of playing a dinosaur on their shoulders – literally. Ask any member of the "Jurassic World Live Tour" team what the biggest challenge is with the show, and you'll get the same answer: handling the prehistoric puppet's pounds, which range between 130-145 pounds.

"They are heavy," Escajeda said. "You have to be this muscular thing that moves really fast – but at the end of the day, you're still a human with over 100 pounds on you, trying to move like you're really strong and fast. There was a lot of conditioning – laps, getting used to being strapped into the feet, because your hip flexors are now using and lifting the legs of the dinosaur, and to do that and try to run was a lot. In the beginning, we thought it was going to be impossible."

"In some of the cities, we've had some people workshop with our weight vests, which are 60 pounds – which is just half of the weight of our lightest dinosaur," Kirschner said. "So not only do they have to emulate the dinosaur, they have to have the strength and endurance to manipulate the dinosaur across a ten-minute period."

In fact, the dinoteers first learn how to puppet without the puppet, instead using a plain dino rig to get used to figuring out the controls and seeing how your reptile's actions and reactions actually look like before closing yourself off inside pounds of scaly plastic.

"It helps take the stress away, so you're not worried about the weight and holding yourself up and instead getting you focused on the puppeteering and articulation," Paz explained. "Then you take that and translate it as you start building the puppet. We start with this, then we go into the dinoteer puppet without any of the foam or skin, then we add the foam and the skin, slowly taking away the visual and adding the weight."

As it turns out, being a dinosaur is a lot of work. No wonder they all called it a day and went extinct all those millions of years ago! 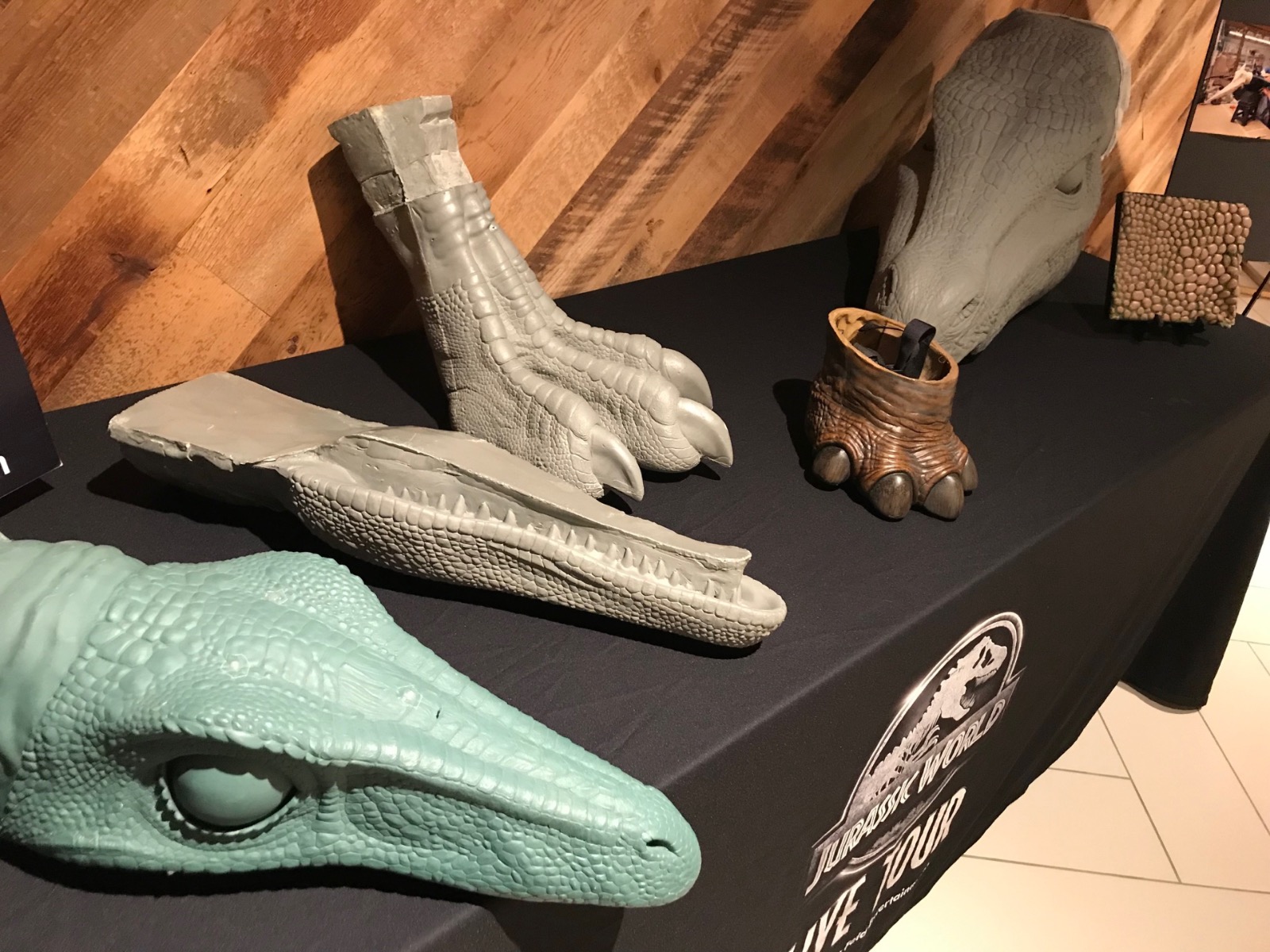 "Jurassic World Live Tour" will feature a cast list of dinosaurs marching through Fiserv Forum on par with the actual Jurassic Period. In total, 21 reptiles spread across seven species will rampage through the new arena, stomp through this special story and greet the humans both on the stage and in the crowd. (Well, hopefully just the herbivores will; the carnivores can keep their distance.) That number includes familiar faces, like the stegosaurus, triceratops and everyone's favorite nightmares: the creepy and crafty raptors – with maybe even a Blue sighting? – and the carnivorous king of the dinosaurs, the Tyrannosaurus rex. But there will also be a new ferocious face ... 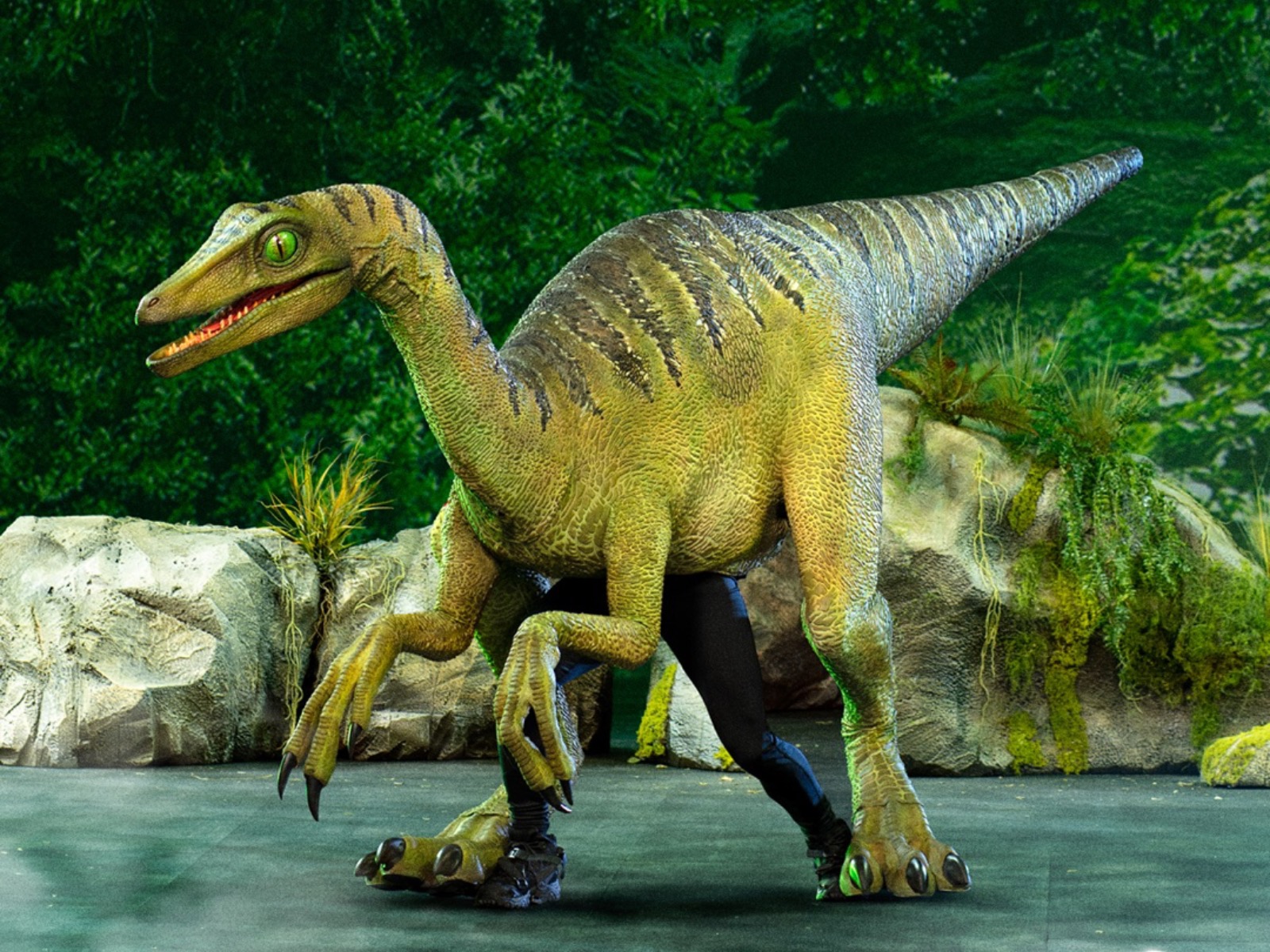 Presenting the newest character in the "Jurassic World" saga: Jeanie the troodon, a species unseen in the series thus far, with an intelligence level also unseen in a dinosaur in any of the past movies. You see, the troodon – a real dinosaur species, not a made-up Hollywood creation – had a large brain for its size, implying that it was smarter than most of its brethren.

"She's able to really sense and emulate emotion more so than the velociraptor," said Keck, who helps play Jeanie the troodon during the show.

And, of course, the troodon is a meat eater. Great; why can't the herbivores ever be the smart ones?

"I get to be the troodon that's in there attacking people, so I feel like I'm really living out my childhood dream, roaring and biting people and throwing them," Escajeda joked. "I'm like, 'Yes, this is exactly what I imagined dinosaurs like and what it would be like to be one.'"

Sounds like bad news for our human protagonists. Good news for dino-fans, though: You'll get to watch the chaos from a safe and comfortable seat when "Jurassic World Live Tour" hits Fiserv Forum this weekend. For more information on tickets and showtimes, visit Fiserv Forum's website.