Sean Henninger ups the food ante at redbar with items like handcut fries and special offerings like Meat Sweat Saturdays.

It’s been about six months since Sean Henninger took over the reins in the kitchen at redbar,

And the bar -- which once served up a steady diet of frozen pizza -- has begun to gain an identity as a place to go for something a little bit outside the box.

Henninger, who started out slowly -- serving up lots of tater tots, hamburgers, wings and bacon wrapped hotdogs --  says the menu has been a constant evolution.

"For me, it’s always been about providing quality food," says Henninger, who ran Times Square Pizza before taking over the kitchen at redbar. "I served up great pizza in a gas station, so location has never been a factor. It’s just taken us a while to get our stride and get people used to what we’re doing. People always knew about the bar, but now people are starting to come for the food."

Though the menu still focuses solidly on pub fare, Henninger says he’s bringing a sense of quality to the table through items like handcut fries (which can be substituted for tater tots in any dish), along with a growing number of special offerings like Meat Sweat Saturday, during which Henninger creates a variety of comfort food items drawn together by a theme (past themes have included State Fair food, hot lunch and Christmas in July). 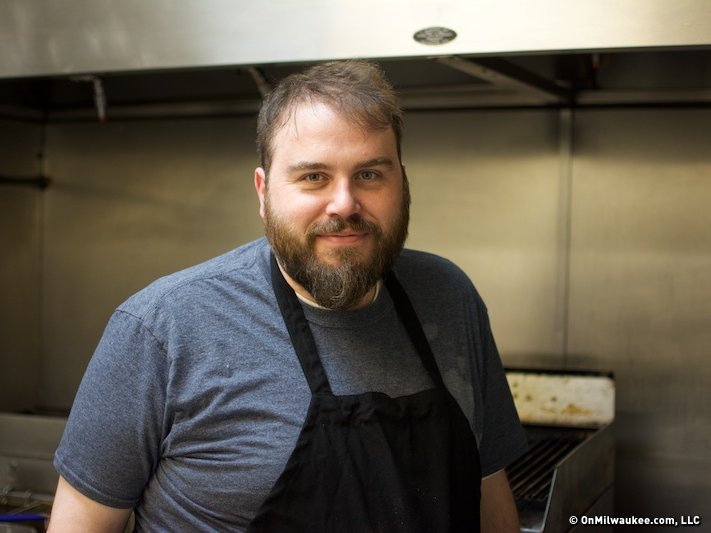 And more and more, Henninger says, he’s focusing more on locally sourced products, like mushrooms and fish from Mushroom Mike, LLC, and produce from local farms.

Henninger, who grew up in Europe as part of a military family, says his upbringing as a chef has been largely influenced by the experience of eating fresh, locally sourced European fare.

"I came back to the states in 1985," he says. "And one of my biggest observations was that the food in the U.S. was all shipped in and manufactured."

Philosophically, Henninger says, he wants to with products that are as close to their origination as possible. "If you can’t get it because it’s out of season, you just don’t get it."

"As restaurants, we have access to better meat than in the grocery store," he says. "But still there’s always better out there."

So, he’s begun forging relationships with folks like Patrick Dueling, a farmer in Iola, WI from whom Henninger has been buying pigs.

"Dueling is raising them right," Henninger says. "Letting them range, so they’re eating all the things pigs naturally eat -- like roots and grass and clover. He’s also feeding goats milk, and sometimes finishing them with hazelnuts."

Flavor is one of the biggest reasons Henninger began insisting on locally raised meats, which he says he started buying around 2008, while he was running Times Square Pizza.

"Even then, we were buying prime quarters to save money to make sausage and different kinds of pork," he says. "And now, I’ve gotten to the point where I can work with the farmer to get the pig to the proper size, and control the proper proportion of fat to meat."

Cuts like ham and smoked pork shoulder will be featured in specials, along with sausages, schnitzel and pork chops.

"We’ll use the belly to make our own bacon," notes Henninger, who uses the smoker he purchased in 2013 at the restaurant. "And I’ll corn the hocks to serve on sandwiches."

Beginning in the next few weeks, redbar will roll out their fall menu, which will include a variety of new wraps, salads and soups, along with a build-a-burger menu and new sauces for their wings. 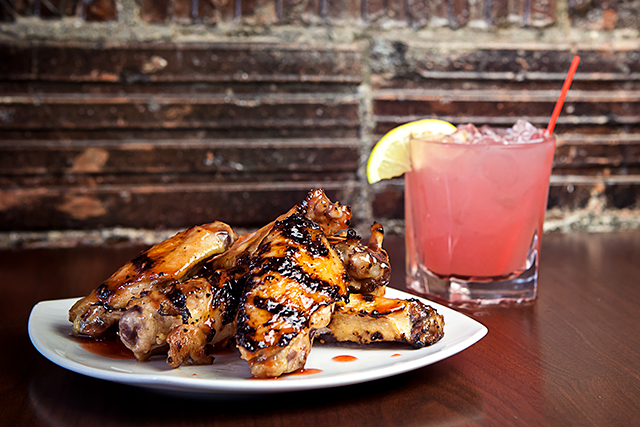 Meanwhile, Meat Sweat Saturday menus will begin showcasing a variety of European cuisines, including Italian and German. Other specials are likely to include items like oak roasted prime rib, a dish Henninger used to make and serve at Times Square. Individual deep dish pizzas may also make it onto the menu as a special during one of the days each week.

In the meantime, redbar fans can mark their calendars for the bar’s third anniversary bash, which will be held on Aug. 22. The party, which will take place all day, will feature a free pig roast starting at 5 p.m. Watch redbar’s Facebook page for details.