On Wednesday, Water Street Brewery became the latest of the bunch to tap its cache of Resilience, brewed along with nearly a quarter of all American breweries as a fundraiser for the Sierra Nevada Camp Fire Relief Fund.

Other Milwaukee-area breweries making Resilience include Good City, Third Space, Component, Milwaukee Brewing Company, Biloba, Explorium and the Pabst brewpub, and some have also already launched their versions, too.

All proceeds from the sale of the West Coast-style IPA will be donated to the fund.

The fire – the worst in California history – took at least 85 lives and destroyed more than 13,000 homes as it burned more than 153,000 acres. Sierra Nevada is located in Chico, California, in Butte County. It survived the fire.

Lots of beer on tap today at Third Space, including Resilience IPA. All sales from that beer will be donated to Camp Fire relief efforts. @lumpiacity will be here… https://t.co/eqvsZoZ2Wk

The sister and brother-in-law of brewmaster George Jahn Bluvas are U.S. Forest Service firefighters based 40 miles from the Camp Fire.

"Their fear for their home, their concern for fellow firefighters, their want to help, was right there in front of me," said Bluvas.

"I'm thrilled to be a part of so many breweries coming together to brew great beer for a good cause."

On its website, brewery founder Ken Grossman wrote, "We sent out the ‘bat signal’ calling our friends in the industry, asking our suppliers to donate ingredients, asking other breweries (our competitors) to donate their time and labor costs, and asking our wholesalers and retailers to carry the beer for free. It was a big ask, and we never could have anticipated the response.

"Our suppliers donated ingredients to every brewery nationwide. Wholesalers and retailers agreed to carry the beer and donate every dollar they received. All of them agreed to do this for free to benefit people they had never met. ... Every dollar Sierra Nevada receives will go to those impacted by the Camp Fire."

Sierra Nevada – which has released its 17,000-barrel batch of the IPA in cans – also shared a homebrew version of the recipe online. 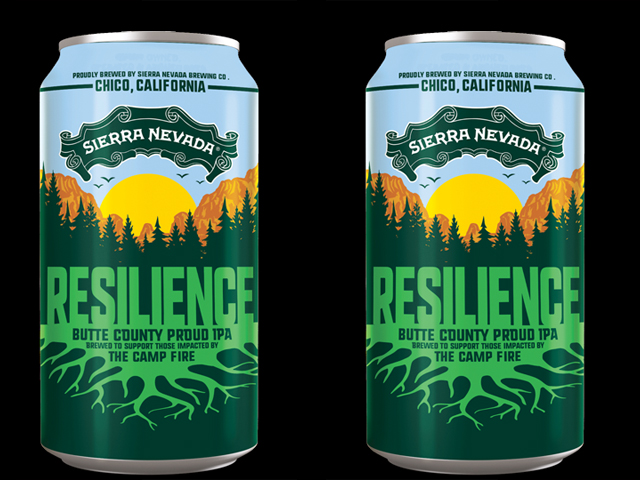 Water Street’s Resilience West Coast-style India pale ale – made according to the Sierra Nevada recipe with ingredients donated by Wisconsin’s Briess Malting and Oregon’s Willamette Valley Hops – is on tap at all four of the brewpub’s locations.

A complete list of participating brewers can be found here.