5 postcards from Milwaukee's dining past

The more you dig into Milwaukee's past, the less it looks like the place we all know today. While some things endure - in the world of dining, think of Mader's and Karl Ratzsch's, for example - the more things have changed. Here are some postcard images of eateries gone by, places your parents or grandparents, or even great-grandparents, might have celebrated a special occasion or just had a good meal.

The more you dig into Milwaukee's past, the less it looks like the place we all know today. While some things endure – in the world of dining, think of Mader's and Karl Ratzsch's, for example – the more things have changed.

Here are some postcard images of eateries gone by, places your parents or grandparents, or even great-grandparents, might have celebrated a special occasion or just had a good meal. 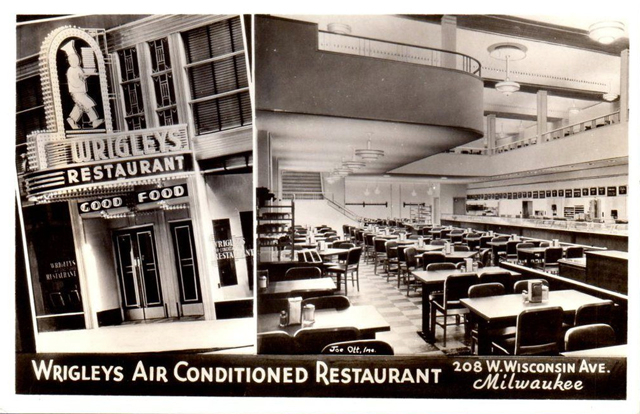 Located at 208 W. Wisconsin Ave., Wrigleys not only had an incredible art deco sign outside and a stunning Moderne interior, it was air conditioned, as this 1930s postcard boasts. Apparently it also had "good food." Hollywood star Gypsy Rose Lee was on hand in 1941 when the restaurant celebrated its fourth birthday. The restaurant, then managed by John B. Henriksen, claimed to have served 5 million people in those initial years. The following year an ad for the place referred to it as "The New Wrigley's." By '43, it was back to being plain old Wrigley's, but it still served "ample meals at reasonable prices."

This building was recently demolished to make room for the new construction that's part of the Milwaukee Symphony Orchestra's renovation of the Warner Grand Theatre. 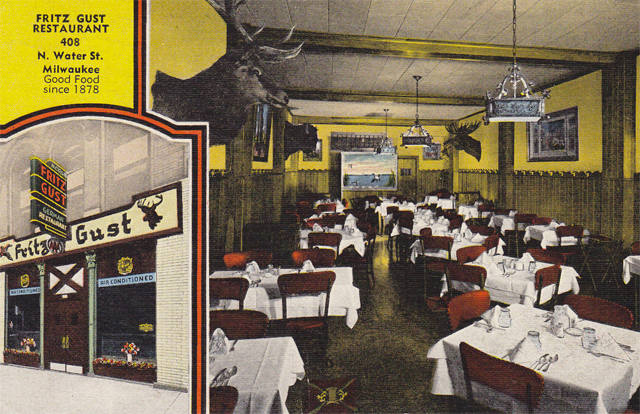 Another air conditioned restaurant serving "good food" – since 1878 – was Fritz Gust Restaurant at 408 N. Water St. This one was named for Gust, whose obit described Gust – who apparently greeted all his guests with a hearty "morg'n" – as a "genial tavern host." Gust died after a stroke in 1923 after having run the restaurant – which he took over from earlier owner Fritz Karrow – just after the turn of the century. Even in 1923, the place was described as an "old tyme tavern." I'm not sure when it closed, but it was still going in 1953, when it was owned by George Zaferos, who started working there as a bus boy in 1919. Gust's widow ran it from '23 to '44, at which point Zaferos took the reins and continued serving "delicious foods" in "generous portions." Seems like it was that kind of place. 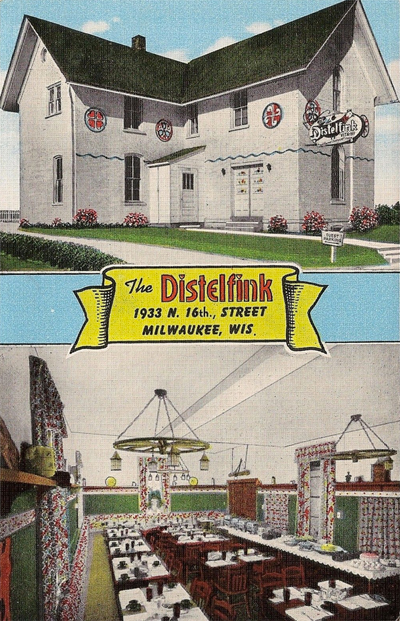 The Distelfink, which looks like it might've been in someone's house, was at 1933 N. 16th St. According to the reverse of this undated card (but post-1940 based on the address), "this unique banquet room, created by VITA-HI, in a traditional Pennsylvania Dutch Atmosphere is available week days for banquets and private parties." On Sundays, it served a smorgasbord, featuring "fanciful combinations of fine food that will please the most enthusiastic gourmets," from 12:30 t0 6:30 p.m., later adding it on Saturday evenings, too. By 1953 it was called the Distelfink Pennsylvania Dutch Groaning Board and served an all-you-can-eat Sunday dinner for $2.25, as well as a "noon day buffet" at lunch on weekdays for a buck less. The owners of "Milwaukee's Quaintist Dining Room" urged diners to "come in once again if you're here sometime" in an advertisement. 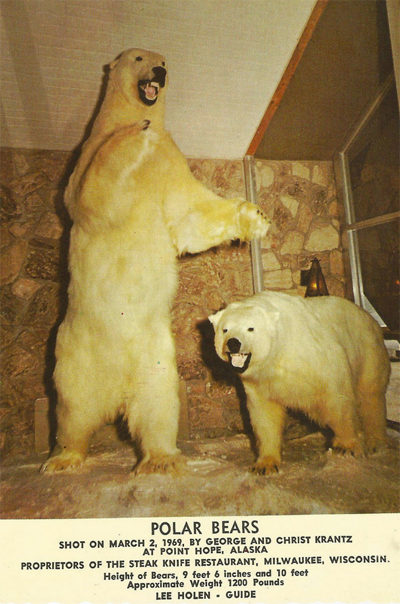 Who doesn't want a pair of taxidermied polar bears looking on threateningly as you enjoy a brandy old fashioned or a chateaubriand? Apparently folks at George and Christ Krantz's West Side Steak Knife Restaurant, in the Ramada Sands, 11700 W. Blue Mound Rd., where diners could enjoy caesar salad, escargot, prime rib, steaks, seafood, chicken and a dessert cart with fine pastries, all in the shadow of these two creatures, shot in Alaska by the proprietors in 1969. The restaurant – and at least one other location, also in a Ramada, this one on the South Side – survived at least into the 1980s, so some of you might even have first-hand memories of these furry creatures. 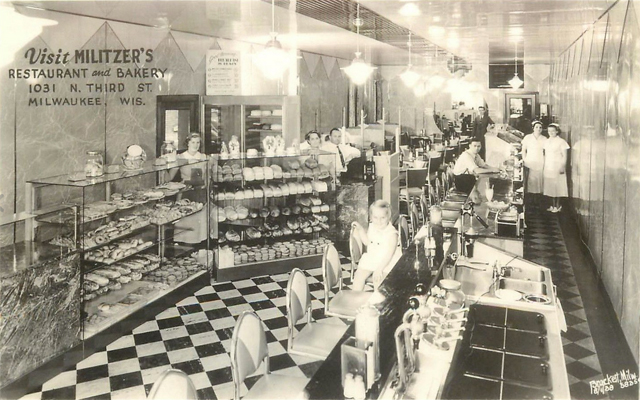 How cool does this old lunch counter and bakery look? It was located at 1031 N. 3rd St., an address now belonging to The Spice House. Militzer's was founded in 1923 by German immigrant Walter Militzer, who opened Militzer's Dutch Treat Restaurant in the bakery at Kenwood and Oakland in 1942. By then, the restaurant you see above had been running for four years. It closed in 1947. Before she opened her custard stand, Elsa Kopp worked at Militzer's, which served custard. In 1959, the East Side restaurant moved to 6850 N. Teutonia Ave. and was renamed the Netherlands Supper Club. By the mid-'60s, there were 13 bakeries around Milwaukee. In 1987, the last of the bakeries closed and Walter's widow Getrude, who ran the bakeries after his death, passed away in West Bend at age 88.