Ticket to ride: learning the safe, smart way to cycle

I didn't really even know I was interested in driving a motorcycle until the House of Harley invited me to take a Riding Academy New Rider course. In three days, I checked something off my bucket list that I didn't know was on it. I took it seriously, and it was hard. But also really satisfying.

This article originally ran in August 2016. The author promptly went out and bought a motorcycle, but he's still dreaming about owning a Harley.

I was a preschooler the last time I sat on a moving motorcycle. My dad, in advance of selling his Yamaha 500, drove me up and down the block, presumably before my mom noticed.

I didn’t really even know I was interested in getting behind the wheel of a motorcycle until the House of Harley invited me to take its Riding Academy New Rider Course. In just three days, I checked something big off my bucket list, even though I didn’t know it was on it to begin with. I took the class seriously, and it was hard. Really hard.

There’s a right way and a wrong way to learn how to ride a motorcycle. The wrong way is actually what plenty of novices do: buy a bike, get a learner’s permit, teach yourself in traffic, then take a very basic written and road test at the DMV … and hope for the best.

The Riding Academy from the Motorcycle Safety Foundation represents the right way. It’s not cheap, but it’s intense, thoughtful, safe and comprehensive. It taught me lessons I’ll keep forever, whether I’m driving on two or four wheels.

For the six of us in this Tuesday-Thursday class, the work began before we ever set foot at the House of Harley, 6221 W. Layton Ave. First, we were expected to complete a three-hour e-learning class from the Motorcycle Safety Foundation. This $20 eCourse is something anyone can sign up for – and it’s not a cake walk – but the real work began when we arrived for the first 8 a.m.-4 p.m. class at the dealership.

It’s been a long time since I sat in a classroom like this, and our group felt like the "Breakfast Club." We had Jesus Merced, a Milwaukee Police officer, and Chris Williams, a West Allis firefighter. We had Delight Morden, a retired factory worker, and Rick Mobley, an assistant athletic director at Carroll University. Steve Hewitt is a substance abuse counselor; the instructor, Chris Blanchard, is a long-time public school teacher.

And of course, there was me, a journalist who came in to write the story, but had no preconceived notions or strong desire to even learn how to ride a motorcycle. I didn’t spend the $374 to be here like the rest of the group, and I didn’t know what I was getting myself into.

It turned out each of us had different goals and expectations for being there. Three had already bought their own bikes. Morden had spent years as a passenger on the back of her husband’s Harley, but just wanted to know what it felt like behind the wheel (so to speak). That’s not unusual, explained Mark McClain, the House of Harley director of business development.

"Somebody may go through the class never having the desire to operate the motorcycle themselves," he said. "But they ride as a passenger, and they want to know what the experience is and how to become a better, safer rider." 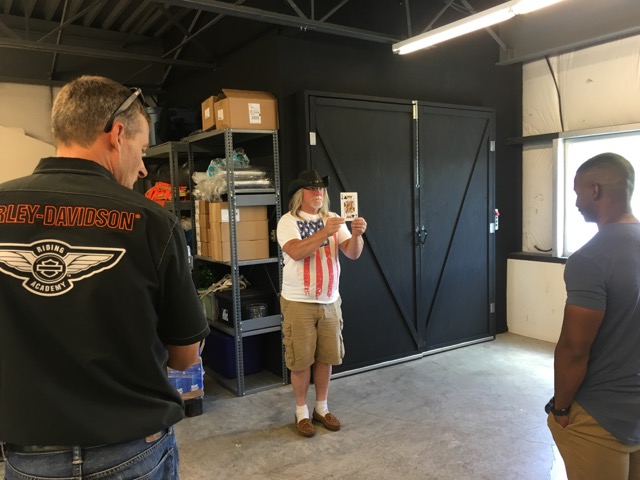 The class walks through a depth perception exercise on the first day of the course.

In fact, safety was the theme that represented every facet of our instruction. The first day felt long and was peppered with spacial theory and turning-radius math. We talked exclusively about riding gear and accident prevention, and it was humbling, though never boring. I found my cocky self-expectations dashed with exercises of risk tolerance and its practical implications. Sure, we toured the store and learned about the brand. It didn’t feel like a Harley sales pitch, yet it was hard not to get a little swept up as a proud Milwaukeean.

That’s not an accident, explained House of Harley owner Jeff Binkert. "If someone goes through a class and I see them riding in a year, it puts a smile on my face. We just want to make sure it's done the right way at the start, so there's no guesses."

Indeed, other classes around Milwaukee are out there for students to take, but I quickly understood that this one was unique. As the largest trainer of MSF students in Wisconsin – some 4,500 people have enrolled since 2001 – it’s serious business. I asked a lot of questions. Blanchard answered every one of them, patiently and thoughtfully.

But after a day of theory, it was time to get on the seat.

Home on the range

For the second and third days, we reported to the Loomis Road Park and Ride. Blanchard had six Harley-Davidson Street 500 motorcycles lined up with our names written on the fronts in dry erase ink. As the sun rose above us, it got real in a hurry.

These smallest of Harleys didn’t feel tiny to me, and even equipped with bright orange "vehicle modification kits" to prevent tipping from totaling the bikes, we saw the risks firsthand: Hewitt was the first to experience an "unscheduled dismount." He was fine, and so was Morden when she tipped over on a slow-turn maneuver. None of the rest of us fell at any point, but we certainly could have. The course required we bring helmets, eye wear, gloves and long sleeves, even though we never exceeded 25 miles per hour. It felt safe and controlled at all times.

As the sun baked the hot pavement on Thursday, we knew what awaited us at 3 p.m. We would take a certified road test that would exempt us from the DMV learner's permit. We spent the whole morning preparing for a test that actually wasn’t nearly as challenging as what we'd already learned.

Not all of us would pass. Hewitt, who had already bought a Harley before the class began, had lost his confidence, and at about 10 a.m., he huddled with our instructor. He made the safe choice to stop the class, though he was invited back to take it again. Our remaining group of five applauded and hugged him. Safety came before anything else. It was a reality check to remind us that motorcycling isn't for everyone.

But it wasn't all stony-faced seriousness, and we all got a taste of the social side of cycling. Our "Breakfast Club" really bonded. Though we came from different walks of life and social circles, we cheered each other on. During frequent water breaks, we discussed what we'd done right and wrong. We talked about our own motivation and our fears.

And finally we took the evaluation. 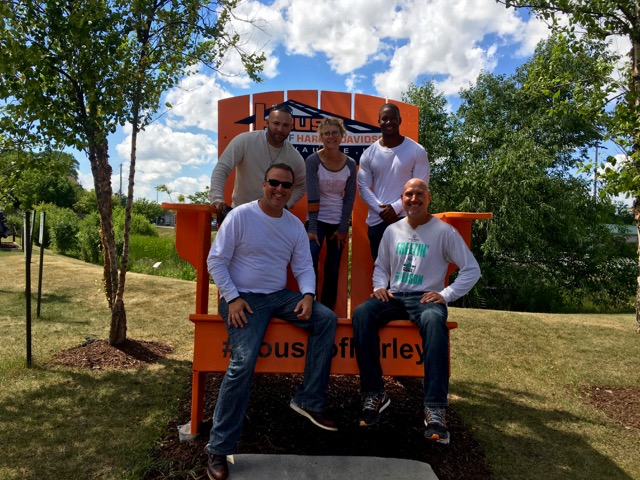 Group photo of the graduation class.

I had to go last, and I was nervous. I scored one demerit when my jeans caught the kickstand, and distractedly, I made a very wide U-turn outside the cones. It took me a moment to regain my composure, but I passed – all five of us did. Two of the students scored perfectly, while the rest of us did a legitimately respectable job. We exchanged hugs and high-fives before heading back to House of Harley for pizza, a group photo and a reflective recap. At 4 p.m., we left and went straight to the DMV to take our written test. In three days, we went from inexperienced novices to five riders with motorcycle licenses.

"It felt much longer than three days," joked Mobley. He was right.

With 27 hours of intense learning under our belts, we made new friends. We hung out, we texted and I bought a motorcycle to continue my journey. No, it wasn’t one of the gorgeous Harleys on site – I’d personally rather hone my skills on a $1,000 used '78 Yamaha, then work my way up to the gold standard – but there was no judging here. In fact, a few days later, the House of Harley lent me a Street 750, and we rode to Motor for lunch. I really get the Harley mystique.

Back at the dealership, surrounded by these gorgeous Milwaukee-built machines, I sat down again with the guys at House of Harley and asked them why they run this course. Is it only about revenue, or is about selling motorcycles? Or is it something else?

McClain said he takes the long view. "The instructors that we deal with are top-notch, not only as people but as instructors. People walk away, and we get a lot of referrals. You're going to do whatever you want as far as bikes go, but as long as you had a great experience, we can't lose." 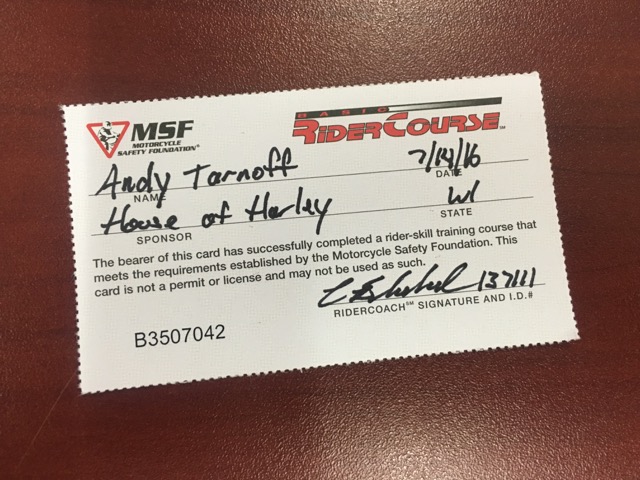 Harley is a powerful local brand, and learning to ride one in a controlled, safe environment surely pays dividends for the dealership, even if the experience is the opposite of a hard sell.

"It's a great farming opportunity to get new students trained safely, introduced to the brand, and given the opportunity to complete a bucket list item," McClain acknowledged. "Learn how to ride safely with proper gear, and ultimately cultivate them into customers of the store. It’s customer retention, and down the road, eventually, bike sales."

That’s pretty much the least aggressive sales pitch you’ll find at a cycle dealer, but Binkert and McClain know that this hobby sells itself.

But you have to start by doing it right. Enrolling in the course doesn’t ensure completion (though if you do, you'll receive an automatic discount on insurance). If your commitment to safety, knowledge and education is top priority when it comes to motorcycles, your ticket to ride is within reach. 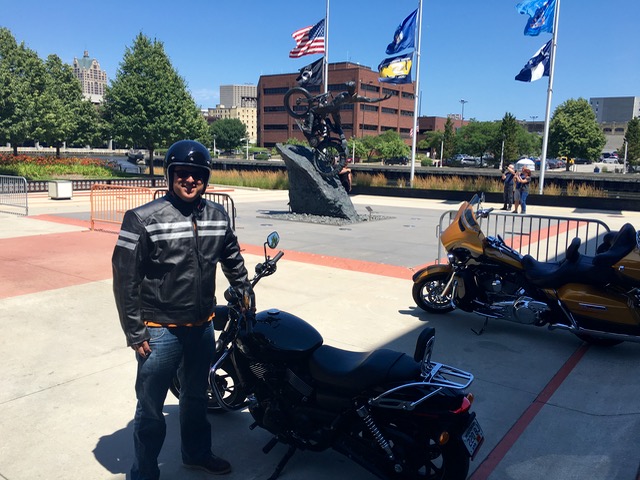 7 reasons to ride up on Harley-Davidson's Hometown Rally

For 120th birthday, Harley will kick-start an annual four-day Homecoming

Your guide to Harley-Davidson's 115th events

House of Harley preps for roar of 115th