"Shut Up and Listen: Me vs. Ms, Confessions of a Bipolar Rock and Roller" - published in paperback by 18% Gray Publishing - is hard-edged, raucous reading. A memoir, the episodic sections channel the grit of Charles Bukowski and the heart of Jim Carroll.

You’ve seen him onstage, kicking it on the drums with characteristic high-energy with bands like Red Ball Jets, Plasticland, Liquid Pink, Love Bully, Rob McCuen and the Ruins and many others.

McCuen, who came to Milwaukee from Iowa at the dawn of the 1980s, has been a fixture on the scene ever since. 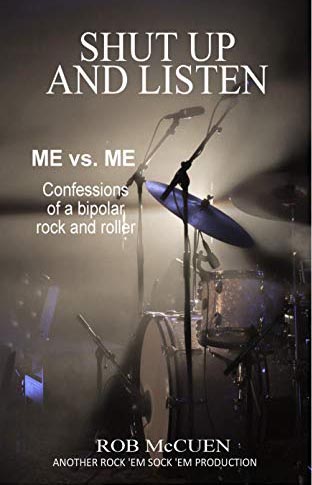 And even if I missed it, McCuen penned a book 30-odd years ago in between hundreds, if not thousands, of gigs in 14 countries and 29 U.S. states, plus taking part in the making of 23 records, and holding down at least 31 jobs for varying periods of time. Did I mention he’s also a race-car driver?

"Shut Up and Listen: Me vs. Me, Confessions of a Bipolar Rock and Roller" – published in paperback by 18% Gray Publishing – is hard-edged, raucous reading. A memoir, the episodic sections channel the grit of Charles Bukowski and the heart of Jim Carroll.

I asked McCuen about writing the book and who thinks is going to read it.

OnMilwaukee: What inspired you after all these years of making music to go back down the road of writing a book?

Rob McCuen: I released my first one, "Square dancing in a Round House," in 1989 when I was living in Glendale with a private detective because I had to escape the temptations of the East Side. Namely, booze, drugs and women. I was high profile then, Liquid Pink, and just starting to transition into a front man in Love Bully, who nobody recalls fondly, but moi.

I've had some of these stories kicking around for 20 years and some are reasonably new. My master planola is to release a new book every two years until I croak. That oughta keep me busy and out of trouble. The first book sold well on rock and roll's dime and this one is selling quite briskly. Kudos to (editor and publisher) Paul Hoffman for believing in it, editing – although I allowed none – and public relations. I’d hate to be stuck with doing P.R. for me. I’m controversial and would have it no other way.

Was it more something you did for yourself or because you thought people would be interested? Both?

Well sure it was cathartic, even essential but I write almost solely for my beloved audience, whoever they are. My hopes are that the book will stand the test of time and if marketed correctly, will make the bestseller list. We came out of the gate slinging poison arrows and in the first week were 258,000 out of 8 million new releases. Impressive, but I'm hungry and humble.

Was it difficult to be honest with yourself and bare your soul, or was there the temptation to sugarcoat things for other people?

Ask anyone who knows me. I am incapable of sugarcoating or guile. I'm an entertainer first. Just another shot at being a true to myself "artist." I've also written over 100 songs. Wild ride, but my life in 80 pages when I've performed on 19 records in 15 countries.

Who do you think is the audience for your book and what do you hope they'll get out of it?

I have no idea, but I know the audience is there. I'm an aging rock star who has kept his shit together and I think many will find that amazing and downright miraculous. I treasure my reader's feedback.

Ain't gonna happen. I'm already gotten raves – a five-star on Amazon by my first idol who lived next door to me in Mt. Pleasant, Iowa; He's a published author himself and shoots from the focking hip – but as I expand my audience, I'm gonna get blasted sooner or later, most likely from jealous musicians with a battle ax to grind.

I have a fiery temper and have ruffled some feathers over the decades. I'm thick-skinned. My paternal grandmother was a knuckle-cracking school teacher named Gladys Messerschmidt. They were dirt poor but proud, strong stock. I still drive race cars, but scientifically, not recklessly. I have been through too much to get whacked in a sprint car or midget car at this stage. My goals are anything but chump change. Paul (Hoffman) and I both aspire to be bestsellers.

Also, I'm going to tour tirelessly. I have an old high school buddy who is a rookie pilot with a ramshackle plane. This has the Buddy Holly story written all over it. Crash and burn. This ol' power popper ain't planning on going out quietly. Both guns blazin' with both barrels.