An early look at Rock the Green's green grounds

Looking around Reed Street Yards, it's hard not to think it would be a perfect place for a nature-conscious music festival. Apparently Rock the Green thought the same thing, as the area will play host to its return on Saturday, Sept. 17.

Nicely tucked away in the Walker’s Point neighborhood is the Reed Street Yards eco-industrial zone. There, with the Milwaukee skyline looking down at a distance, you’ll find a lovely stretch of green field right next to the Hank Aaron Trail and the Menomonee River, the Water Council’s Global Water Center research facility at work and, at least the case Friday afternoon, a beautiful blue sky enveloping the whole thing. And perhaps it was all of the signs up for an upcoming local environmentally-conscious musical festival, but it’s hard not to think, "Boy, this would be a perfect place for an environmentally-conscious musical festival."

Apparently Rock the Green, the local nonprofit dedicated to educating and empowering the community to take action toward sustainable lifestyles, thought the same thing, as the area will play host to the return of the organization’s Sustainability Festival on Saturday, Sept. 17.

"I was down here for a meeting in 2015, and the land had actually just been remediated and newly sodded, and it was just glorious and gorgeous," recalled Lindsay Stevens Gardner, founder and executive director of Rock the Green. "We actually looked at this spot in 2008; it was a brown field, so it wasn’t safe to do anything here, so I looked at all different venues. When I came back in 2015, it was remediated and gorgeous. It’s a great inspiration to look at the city skyline and bring the festival back."

Starting back in 2011, the festival went on a high-profile two-year run – then at Veterans Park – with big names like Ben Folds, The Fray, Fitz & the Tantrums and a pre-fame Imagine Dragons headlining its lineups. However, in 2013, Rock the Green was surprisingly cancelled, and its announced plans for a return in early fall of 2014 would eventually fall through as well. This summer, though, it’s officially returned, with its new venue – and, even just a few years away from its last edition, a new world around it.

"Since 2012, since our last festival, sustainability has blossomed more throughout Milwaukee and the area," Stevens Gardner noted. "I think a lot of corporations have more sustainability initiatives ingrained in their platforms."

One thing that hasn’t changed, however, is the quality of the music lineup, featuring familiar names from both the local music scene – from Trapper Schoepp to NO/NO and New Age Narcissism – and the national charts, like Robert DeLong, Best Coast and The Heavy. The artists will be scattered across two stages all day Saturday starting at 1 p.m. and ending with main headliner Lord Huron at 9:30 p.m.

But before anyone takes a stage and strums a chord this weekend, Rock the Green invited the media to tour its exceptionally green grounds to see what people can expect Saturday when they walk through the opening gate. 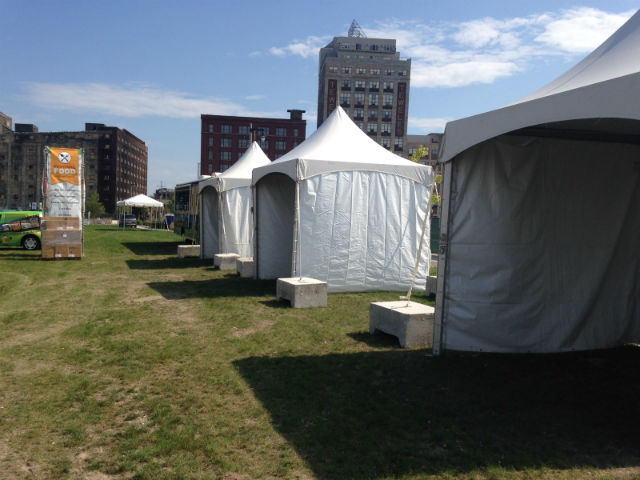 Of course, there are the familiar and expected festival sites, such as the food section located down the grounds’ main drag, which will be loaded with appetizing options from the likes of Bel Air Cantina, Dr. Dawg, Buddha Lounge, Jamaican Kitchen & Grill and Screaming Tuna – plus Pete’s Pops and Classy Girl Cupcakes to sate your sweet tooth. 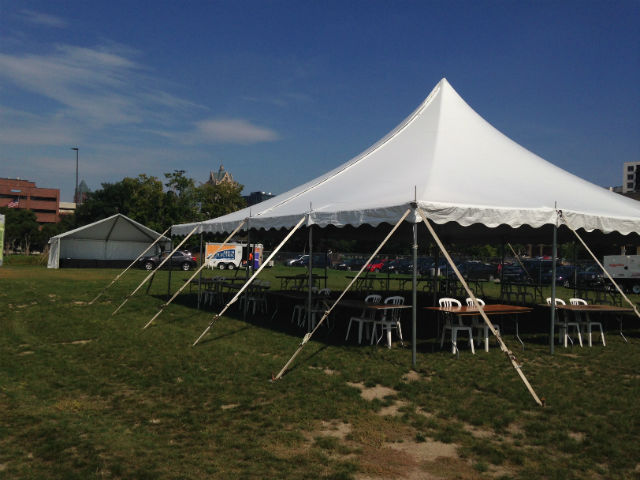 New to this year’s festival is also family-focused programming over at the Eco-Kids Stage, just off to the right after entering the grounds. There, Rock the Green will feature several raptor programs from the Schlitz Audubon Nature Center, a beekeeping program, teen-friendly cooking classes, yoga and trivia.

But obviously the major unique element and appeal of Rock the Green is the green focus – something that’s not hard to find walking around the grounds thanks to several signs scattered across the area covered with sustainability factoids and "eco-nuggets."

Also not easily missed is a large white tent just to the right through the opening gate, where 16 of Rock the Green’s fellow environmental nonprofit "eco-champs" will be located, showcasing eco-education and giving attendees tips and tricks to help the environment well after the lights go down and the festival wraps up Saturday night. 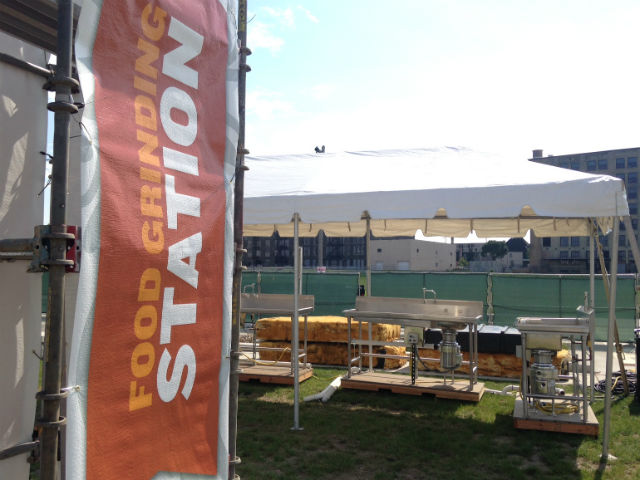 Further down the festival grounds, past the food options on the left side of the main drag, will be the certainly less expected "food grinding station." There, attendees will be able to bring their leftover food scraps and waste to the sink stations to be (as the name suggests) ground up for a good cause all day long.

"Corn cobs, you name it, will be ground up and put in the grey water holding tanks, so after the festival, it’ll be vacuum-trucked up and driven over to the Milwaukee Metropolitan Sewerage District where it is processed into Milorganite, which is an organic fertilizer, as well as its energy to run their plant," Stevens Gardner explained. "So none of the food scraps are wasted; it’s all upcycled and reused again." 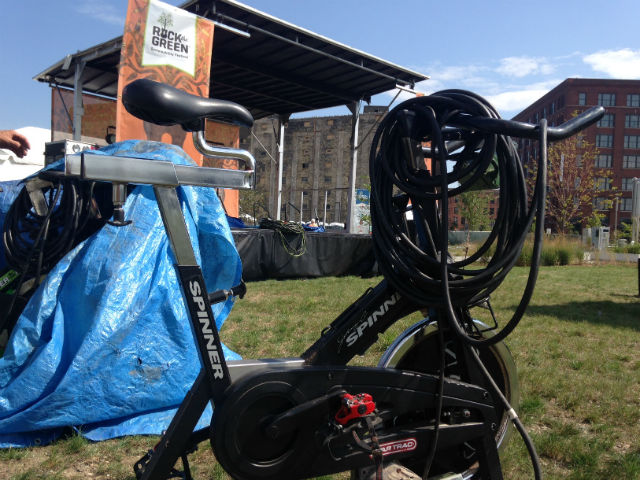 One of the bikes used to power the Pedal Power Stage.

Perhaps the showiest of the green enviro-gadgetry on display at Rock the Green, however, comes at the right near the beginning of the main drag. There, you’ll find the festival’s Pedal Power Stage, which is exactly what it sounds like: a music stage powered entirely – from the sound to the lights – by the pedaling of nearby bicycles. Several local cycling teams – including The Bella Donnas, Black Girls Do Bike and more – will be tasked with pedaling the bikes (fitting emblazoned with the moniker "Power By The People") and bringing the stage to life for the six local music groups taking the spotlight. 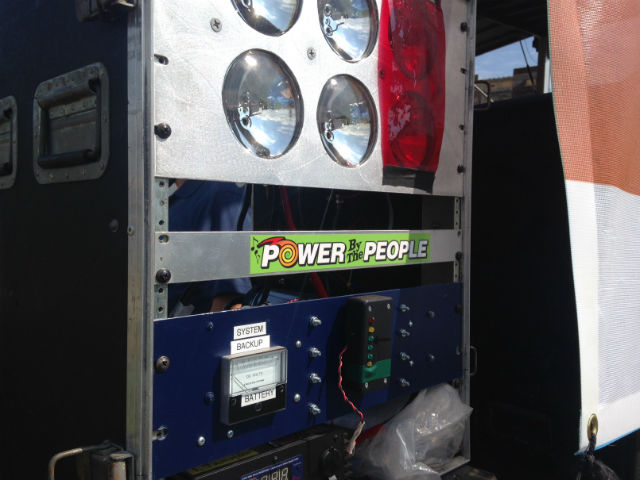 In the end, the goal for the near-zero festival is for Saturday’s attendees and participants to only produce about one ounce of waste – compared to the one pound (or 16 oz.) typically created by a festival goer via water bottles, wasted food, food wrappers and more. And that’s just for what’s taking place Saturday night, as Rock the Green’s mission extends far beyond Reed Street Yards.

"Our goal is to inspire action into festival attendees," Stevens Gardner said. "Maybe they didn’t know it’s good to put food down your drain if you live in the county of Milwaukee because it winds up upcycled into Milorganite or energy to run their plant. It’s these little learning pieces on-site, so we try to make things engaging and fun so it sticks.

"We’re trying to inspire change and action but in a fun, inclusive way – like throwing a great concert." 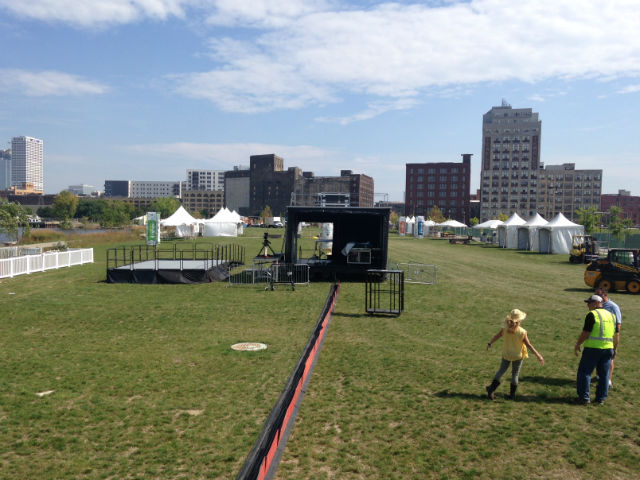 The view from the main stage.

Harper ready to Rock The Green

Trapper Schoepp prepares to rock the green with storytelling lyrics

The results are in for Rock the Green

The Fray will Rock The Green