8 highlights of the Rolling Stones' "Exhibitionism" show in Chicago

The Rolling Stones' "Exhibitionism," which runs through July 30 at Navy Pier in Chicago, includes more than 500 artifacts, nearly 200 original artworks, a room full of flamboyant outfits worn by the band members across the years, videos, photographs, concert posters, guitars and more.

The first photo you see when you arrive at the Rolling Stones’ "Exhibitionism" show at Navy Pier in Chicago is a photograph of guitarist Brian Jones, who died in 1969. It was a good omen that this show would dig deep into the six decades of the world’s greatest rock and roll band.

"He formed the band," former Stones bassist Bill Wyman told the Los Angeles Daily News. "He chose the members. He named the band. He chose the music we played. He got us gigs. ... he was very influential, very important."

And he never made it out of the band’s first decade alive. So, it might be easy for Mick Jagger, Keith Richards, Charlie Watts and the rest to rewrite history and leave Jones behind, but to their credit they’ve chosen not to do so.

The in-depth exhibition, which opened in Chicago in April and runs through July 30, includes more than 500 artifacts, nearly 200 original artworks, a room full of flamboyant outfits worn by the band members across the years, videos, photographs, concert posters, guitars and more, tracing every era of the band's impressively enduring lifespan.

It starts when the the Stones formed in 1962 – with a stellar recreation of the flat that Jagger, Richards, Watts and Jones shared in London’s Edith Grove – and runs right through today, with models of stage sets for the band’s 2016 tour.

I didn’t get to see The Stones live until Summerfest 2015 – four decades after I became a fan – but experiencing "Exhibitionism" was almost as fun and one that was surely more educational.

The exhibit – which is only appearing in a few cities around the world, Chicago being as close as it will get to Milwaukee – is vibrant and loud and flashy, just like the band it chronicles.

Here are some of the most interesting things you'll see when you go: 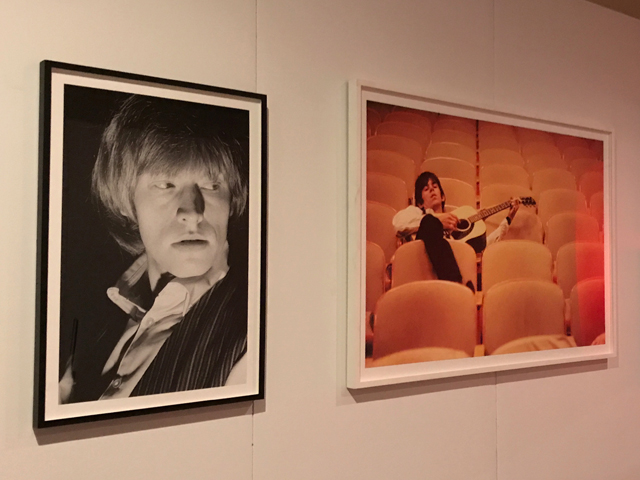 Brian Jones started it all, so it makes sense that his is the first face you see when you enter "Exhibitionism" at Navy Pier. 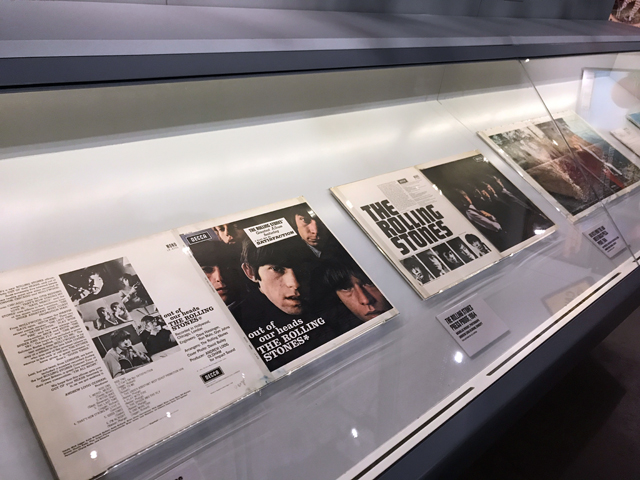 A display case hold proofs of the artwork of the first Stones record, the classic "Out of Our Heads" and the "Big Hits (High Tide and Green Grass)" early greatest hits record. They're pretty amazing. 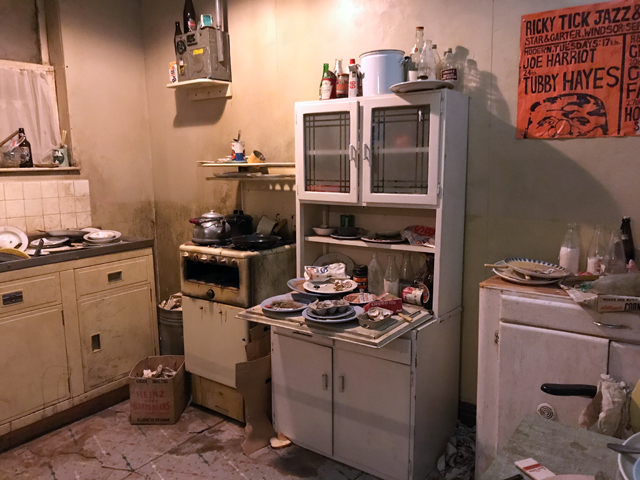 There are life-size reproductions – extremely detailed, recreated from the band's memories – of the flat that Jones, Jagger, Richards and Watts shared in Edith Grove. Remarkable that such great music was created by these incredibly sloppy kids. 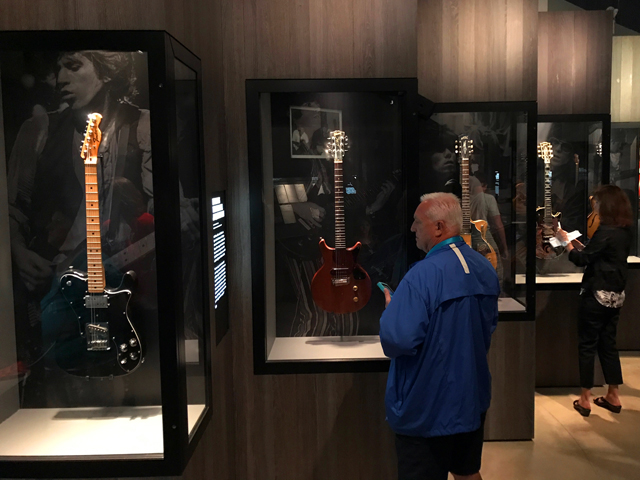 Any Stones fan will recognize the axes in this room. These are the guitars that (mostly) Keef and Ron Wood used to make some of the band's most beloved records. 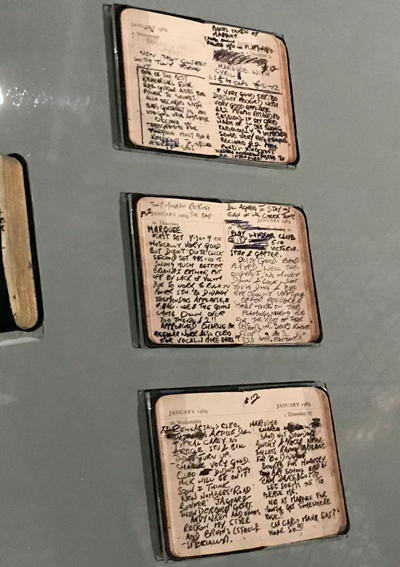 Though we can only see a few pages, it's pretty fun to read Keith Richards' diaries of gigs and rehearsals from 1963. 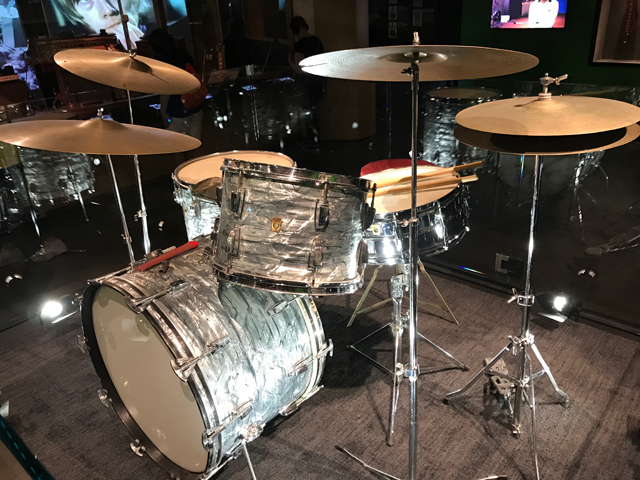 As a drummer – and one who loves Charlie Watts' unique feel – seeing this kit, and then being able to view it from his vantage point was a real treat. 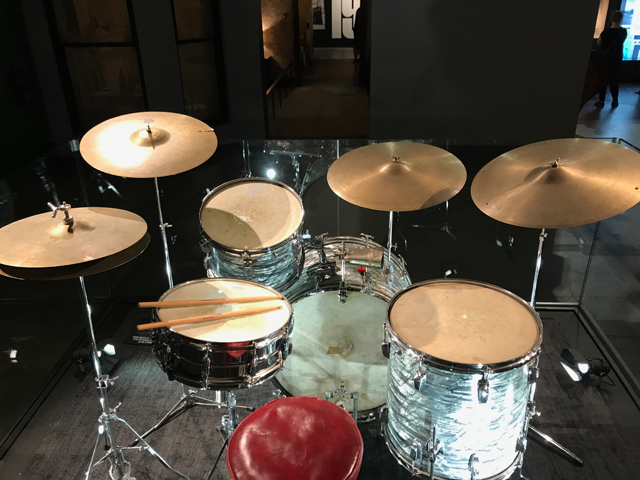 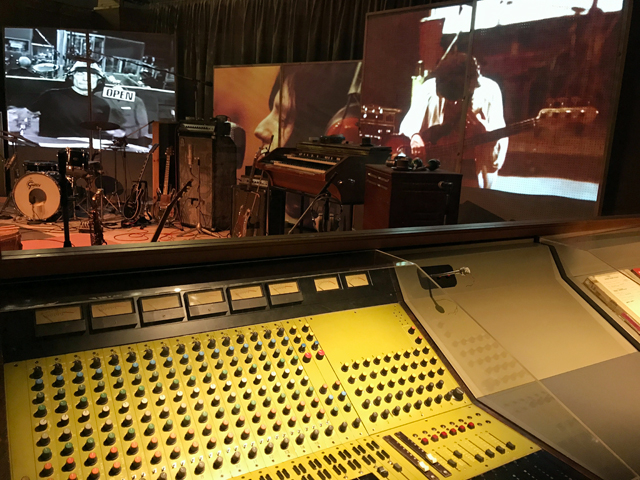 There's an instrument-filled recreation of Olympic Studios in London, where the Stones made six records between 1966 and 1972, including "Beggars Banquet," "Let It Bleed" and "Sticky Fingers." The Beatles, Jimi Hendrix, Led Zeppelin and others also recorded there. 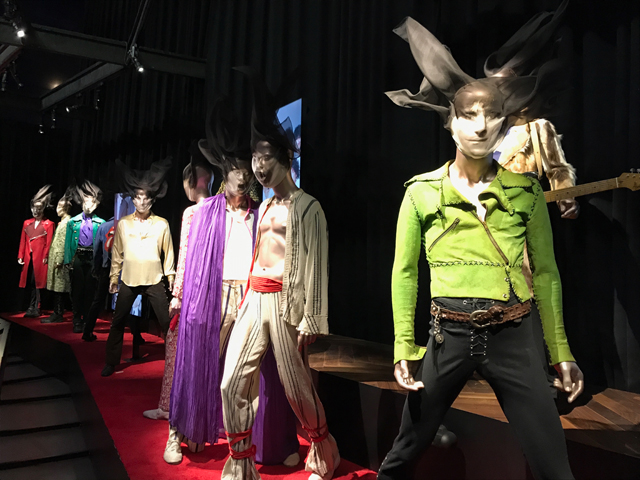 Much like the guitar gallery, any Stones fan who has paid even passing attention to the band over the years will recognize some of these flamboyant outfits, designed by the likes of Alexander McQueen, Prada, Dior, Gucci and Jean Paul Gaultier.

Sure, you can drive down to see "Exhibitionism" and then come back home, but it's summer, so why not make a mini-vacation of it?

The 400-room Loews Chicago, which opened about three years ago in a sleek modern tower in the Streeterville neighborhood north of the river and east of the Magnificent Mile, is just a few blocks from Navy Pier (there's also a free trolley that leaves from out front, if you don't want to walk), and has embraced "Exhibitionism" big-time.

When we stayed, we could see Navy Pier right outside our window... 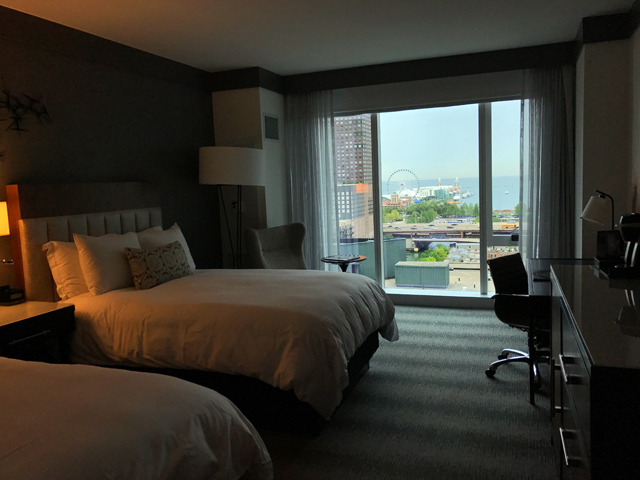 The hotel is offering a "Let's Spend the Night Together" package with overnight accommodation, two tickets to "Exhibitionism," two Stones-themed cocktails at the ETA restaurant and bar in the lobby and discounts at the hotel restaurant and spa (which has a great, two-lane pool with a view of the rooftop terrace bar). Rates start at $239 but depend on when you choose to stay.

Loews has a number of other deals available, too. Families with children might dig the Urban Explorer Family Package, with free breakfast for kids, milk and cookies delivered to the room and an urban explorer backpack for the young ones, with a water bottle, a compass, a scavenger hunt booklet and more.