Yesterday's Brewers sausage race came with an even better backstory

While the location of yesterday's second sausage race may have seemed pretty regular or mundane - just a normal neighborhood - it may actually be the most special backdrop of the season.

With no fans in the stands this season, the Brewers sausage race has taken the legendary links on the road, turning the sixth-inning tradition into a statewide tour of popular locations across Wisconsin. After such recognizable and grandiose landmarks as the state capitol, Marquette University and the Milwaukee Mile, however, Wednesday’s second game featured someplace new for its meaty marathoners’ race track: a seemingly normal house on a seemingly normal neighborhood street.

But while the location may have seemed pretty regular or mundane – especially coming on the heels of lofty campuses, the halls of government or giant race ovals – it may actually be the most special backdrop of the season, one with an even better backstory: a family and a team paying tribute to a man who loved the Brewers so much he turned that affection into a job.

Joe Stimac lived a special life. An Army veteran of World War II and the Battle of the Bulge, earning a Purple Heart in the process for his service, Stimac returned home and raised a family of five kids with his wife, Viola, while working at Allis-Chalmers.

And, as a lifelong Milwaukeean, Joe Stimac was a big fan of his local ball club – whether it was the Braves or the Brewers when they moved into town from Seattle in 1970 – and shared his affection and fandom with his family. So when he retired from Allis-Chalmers, he picked up a new job, one near and dear to his Brewers-loving heart: an usher at Milwaukee County Stadium. There, he got to be near the team he loved and experience some of the team’s greatest moments.

“My dad was ushering when the Brewers were in the World Series, and the ushers each got two tickets that they could use for each home game. So all of the kids got a chance to go to one of the World Series games,” remembered Jane Stimac, one of Joe’s daughters. “When he was working, we would go and check him out at his post in the stadium. It was always a big part of our lives.

“I think once he retired from Allis-Chalmers, it was a dream come true to be able to have a job at the stadium, to go there and see the Brewers play while earning a few extra bucks. And at County Stadium in particular, it was really nice because they had a separate room for all the ushers. So he’d go a couple of hours before the game and they’d all play sheepshead down in their room before working the game. It was just a really fun experience for him.” 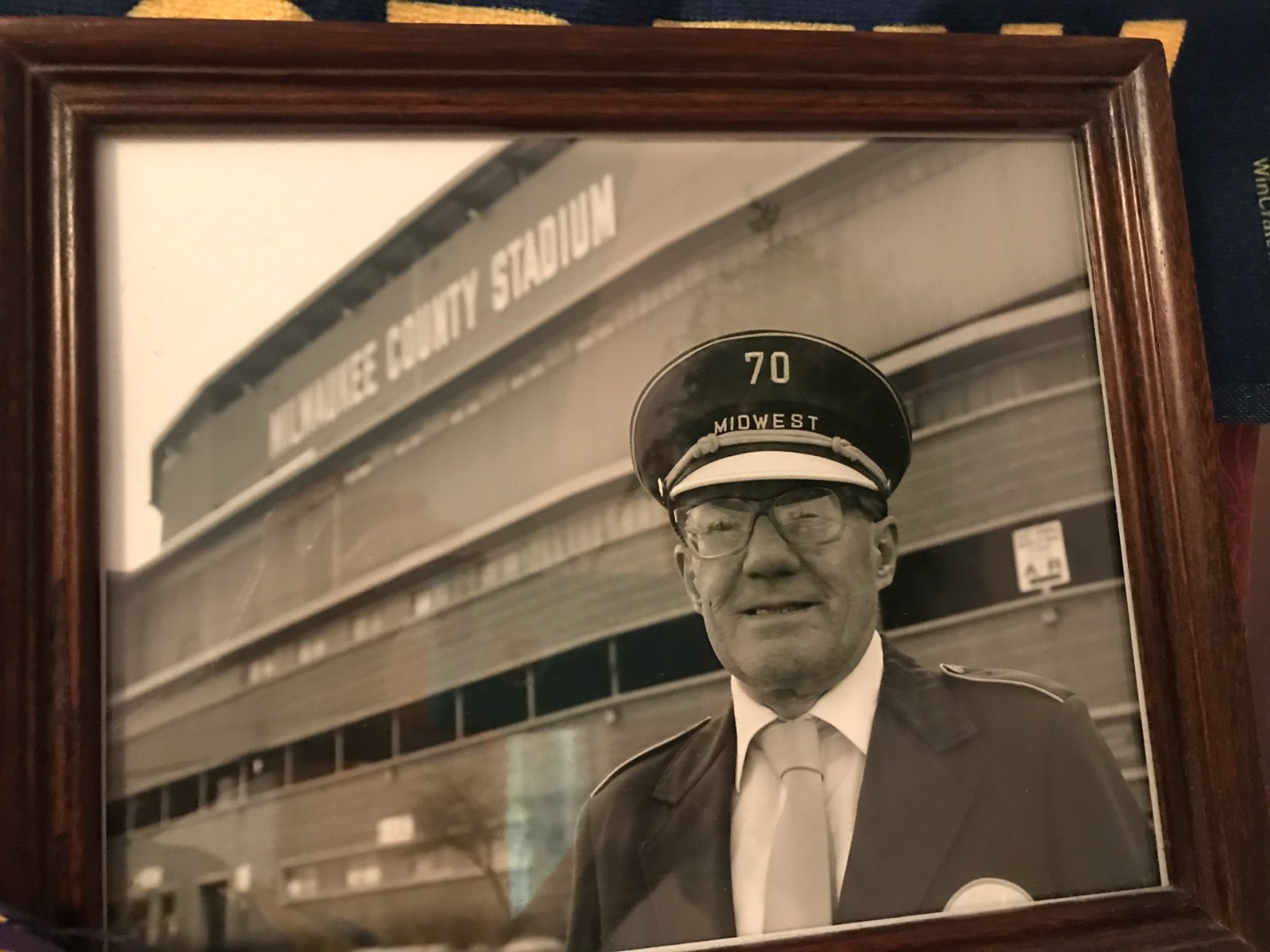 Stimac worked for the Brewers in the stands as an usher for 20 years, and even when he grew older and his eyesight began to wane due to macular degeneration, he kept working his post, sitting on a milk crate down by the Brewers dugout and “mainly keep the kids from hanging over the dugout,” Jane joked.

Unfortunately, Joe Stimac passed away in 2005 of pneumonia at the age of 88, but his love of the Brewers and his job at Milwaukee County Stadium lives on. His children still root for his favorite team, and Dale even resurrected his father’s still-pristine County Stadium usher uniform out of the basement for a very special Halloween several years ago.

“We took my daughter to the Zoo for trick or treat, and everybody dressed up for that, so I went downstairs, confiscated his old usher’s uniform, put it on and wore it to the Zoo,” he recalled. “A couple of older guys recognized it. Most of the kids, it was funny because they were asking me if I was an airline pilot.”

But most of all, his memory lives on through Viola Stimac, his wife of 57 years who would often drive Joe down to County Stadium for work, following the games at home on the radio or television while he was on duty. She still lives in the house where they raised their family together and still roots for the Brewers today at the age of 99. So when Jane heard from a friend about the sausage race’s 2020 touring plans – and that the team was taking nominations for special locations to host races – she thought it would be the perfect tribute to her Crew-loving parents, especially while mother was stuck mostly homebound during the ongoing COVID-19 pandemic.

And the Brewers agreed.

“I was just so excited,” Jane said. “It was really amazing and quite touching.”

“My sister called me; she was up north and said, ‘Hey, can you get over to mom’s tomorrow? There’s going to be a sausage race,’” Dale laughingly recalled. “It was a moment’s notice, so we started calling everybody we could think of who might be able to make it, telling them to wear Brewers gear because there was gonna be a sausage race in front of mom’s house. It was a lot of fun.” 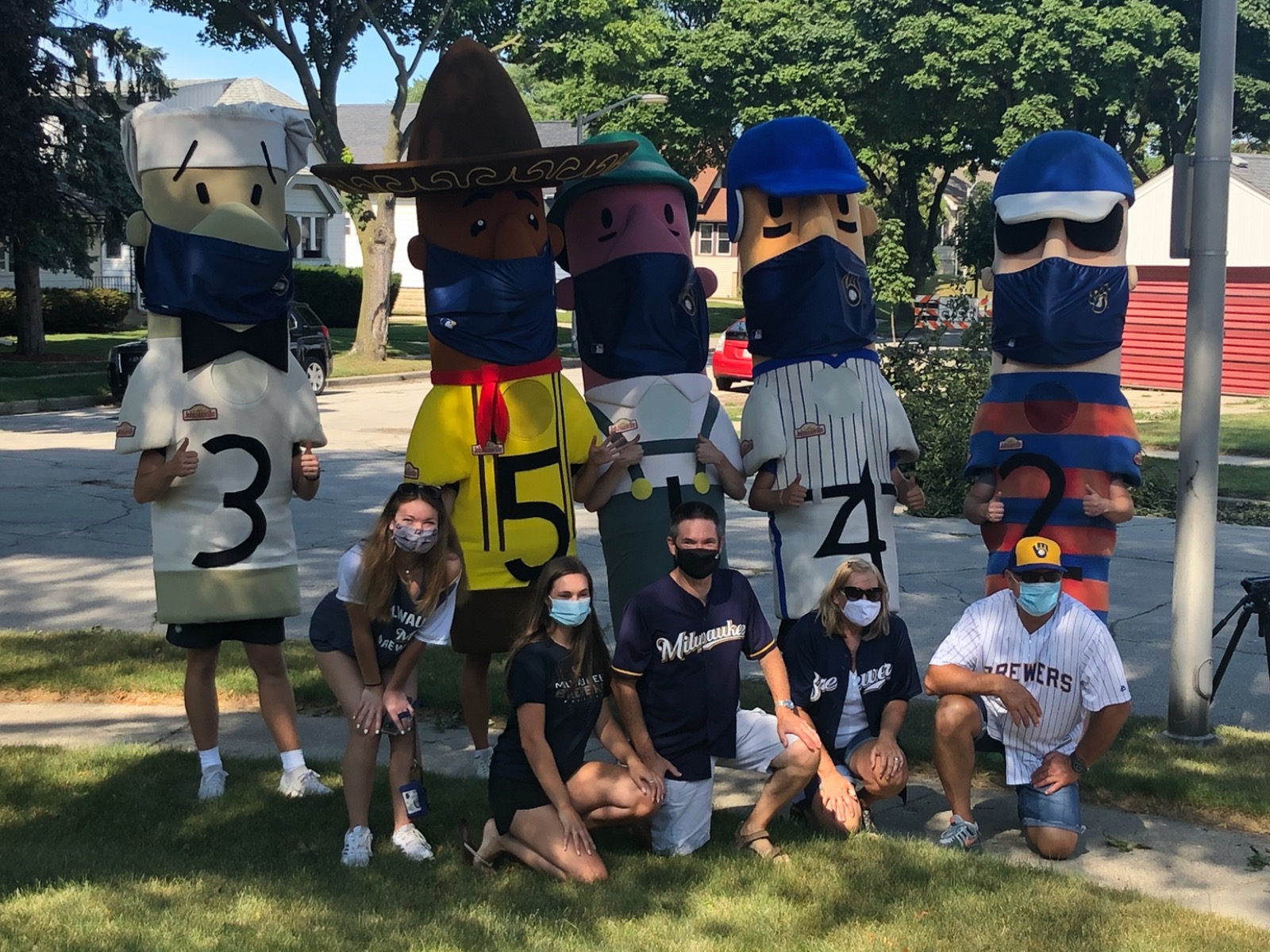 So what may have looked like simply a sausage race ended up serving as a small makeshift (and masked) family reunion for the Stimacs. And while the race may have been the main event for those gathered that day as well as those watching Wednesday night’s game – spoiler alert: Bratwurst won – the true star of the show is Viola Stimac, shown near the beginning of the race decked out in Brewers merch and holding a cherished photo of her late husband posing in his usher outfit in front of County Stadium. 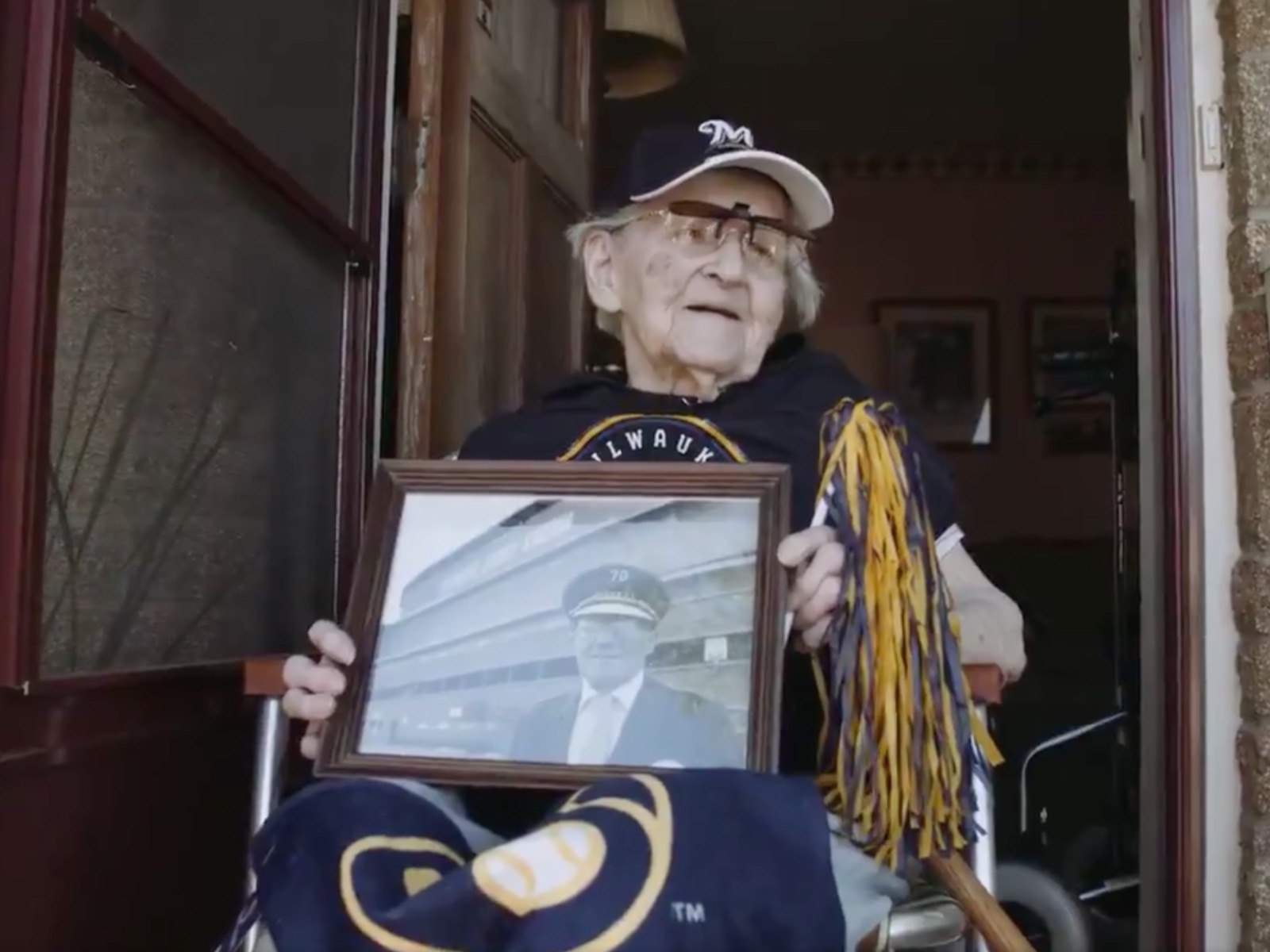 “She said it was really fun and that having some other family members there with her was really great,” Jane noted, adding with a laugh, “and she loved getting the Brewers gear.”

“We coaxed my mother out,” Dale laughed. “She’s 99, and she was like, ‘I don’t want to go out there, I don’t want to go out there.’ But we said, ‘Mom, we’re going to carry you out onto that porch if you don’t get out of that chair.’ So we got her out there, and she had a ball. She got a pompom, and she was waving it and having a good old time with it. She said my dad would’ve been thrilled.”

Unfortunately, Jane wasn’t able to attend the race herself, but she did get to see her parents’ story bring light to others.

“Once I posted some of the pictures and told people about what happened on Facebook, I was really, really touched by how excited so many people were and how they thought it was such a great story,” she said. “It was really nice because things are pretty rough right now, and it just seemed to make people feel really, really happy.”

And while their father may not have been there in person to see the tribute – and his team win, 6-0, against the St. Louis Cardinals – he was almost certainly there in spirit, enjoying his favorite team and his family together.

“I know my dad would’ve been thrilled,” Jane said.

“He would be floored,” Dale added. “He loved (working at County Stadium). He just loved it.”

From love to loss: Milwaukeeans share their Lake Michigan stories

The life and death of Sydney Hih