Back in the swing of things

When you've been awake for 24 consecutive hours, due to an early flight, a time change and the excitement of an 18th consecutive Spring Training trip to Arizona, it's understandable to make a few bad decisions. Fortunately, the only one I regret is that humungous carne asada burrito from Filiberto's at 2 a.m. Mountain Standard Time, before collapsing into a few hours of sleep at the Talking Stick Resort here in Scottsdale.

SCOTTSDALE, ARIZ. — When you’ve been awake for 24 consecutive hours, due to an early flight, a time change and the excitement of an 18th consecutive Spring Training trip to Arizona, it’s understandable to make a few bad decisions.

Fortunately, the only one I regret is that humungous carne asada burrito from Filiberto’s at 2 a.m. Mountain Standard Time, before collapsing into a few hours of sleep at the Talking Stick Resort here in Scottsdale.

Sunday went about as well as one could hope. The 6 a.m flight out of Milwaukee got us in to Phoenix nice and early. We picked up the loaded Highlander that Toyota’s PR people are letting us play with this week and headed straight to Maryville on the west side of Phoenix.

Getting to a spring training facility by 10 a.m. for a 1:05 p.m. game has many advantages, the biggest one being you’re in absolutely no hurry. We walked around the minor league practice fields, noting the dozens and dozens of super young potential future Brewers, many of the kids looking like high school players in spring Brewers uniforms. The even younger kids — the fans, walking hand-in-hand with their parents — look on with just as much wide-eyed excitement as the grown-ups. Here, anything is possible and this is where the baseball dream begins for players and young fans alike.

We lingered around the gift shop (spoiler alert: the T-shirts this March are lame) and picked up the game notes in the press box. We took photos and tried to recognize some of the newer names with high numbers on their backs. Somebody mentioned a snowy weather forecast back home, and it seemed an impossible concept to grasp as we sat on the outfield berm under the scorching Arizona sun. We moved around the park and sat behind home plate for a bit, where Robin Yount looked on during batting practice.

Eventually, we even watched a little baseball. It’s amazing how everything here snaps back into focus, even if we’ve been gone for an entire year. Just like we don’t need any GPS anymore to make our way around the Valley, the snap of the first pitch into Jonathan Lucroy’s glove gave us that familiar feeling of home. 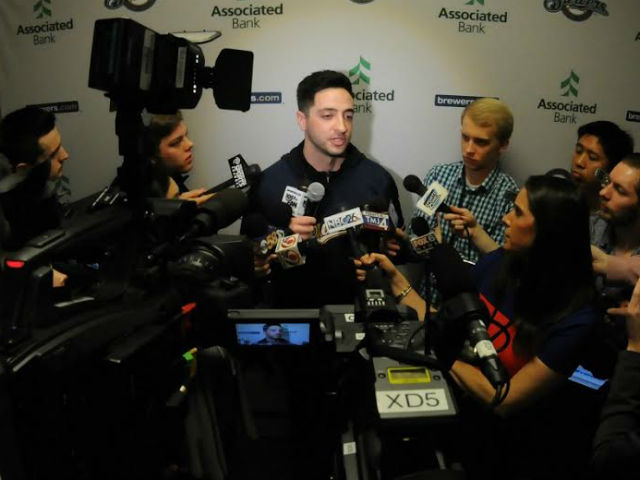 I noticed a few things in Sunday’s split-squad loss to the A’s. Kyle Lohse looked sharp, and I had a feeling that he would be as he warmed up with Lucroy, throwing strikes from center field to the right field foul line. Lucroy, too, blasted a home run to left in his first spring hit, while Ryan Braun remained hitless for the spring. He struck out looking, then smacked at the first pitch deep into center, but right into the fielder’s glove, and struck out again. It seemed, however, that he didn’t have that gloomy disposition from last year. In fact, even in a losing effort, the Brewers looked focused Sunday. That’s a good thing.

One thing I don’t love about the Phoenix area is just how sprawling it is, so we left before the last out to get a jump on traffic to our hotel on the far side of town. Before I walked out of Maryvale (our other games will be on the "road"), I had to wonder how much longer the Brewers can play here. Despite its spacious practice area, Maryville Baseball Park no longer even comes close to cutting it in the Cactus League. If Arizona doesn’t want to lose the Brewers to Florida, the Cactus League needs to get its act together and find the Crew a place befitting of a Major League team. And quick. 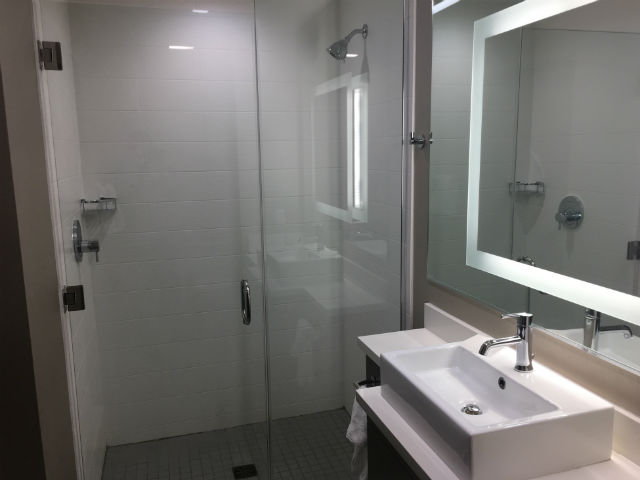 This year, we’re staying at the Talking Stick Resort in Scottsdale, a partially hosted package in the same building as the casino. It’s really quite nice. Located east of the 101, it’s easily visible because it’s tall – and not much is here, sticking out out the desert like a Vegas-style hotel with a mountain backdrop. The rooms are new and well-appointed, on par with or better than almost everywhere but a few places we’ve stayed over the years (the bathrooms are great). And oh yeah, there’s a casino downstairs.

Our first impressions of the amenities, however, have been a little mixed. We heard that their Vegas style extends to the pool area, but a lot of it is under construction at the moment, so there’s no bar or hot tub. At happy hour, it sure didn’t feel very Vegas; more like empty. And for our 7 p.m. hosted dinner at the sister property, Casino Arizona’s Cholla Prime Steak House and Lounge, we got a lot of mixed messages about how we were supposed to get there. Each valet and concierge told us something different about shuttles, private cars, etc., so we finally showed up a few minutes late to this more local-oriented casino, probably a little overdressed and a little frazzled.

We’ve dined at some pretty high-end places in Scottsdale, and Cholla wasn’t one of them, but I was astounded at the value here. The most expensive steak was the $22 filet mignon, and it was quite good. Our group practically ordered the entire menu (the Chorizo-stuffed dates were a highlight), include elk steak imported from New Zealand, sides (get the au gratin potatoes) wine, cocktails and creme brulee, and we still didn’t crack $250. We left absolutely stuffed.

But not too stuffed, apparently to order a huge Filiberto’s burrito at the end of the night after some gambling. That one is still sitting in my stomach as I pen this blog entry this morning. No breakfast for me today.

Speaking of today, we will experience something that almost never happens on our trips: a Brewers off day. That last time that happened for me was in 2001 or so, when we took the opportunity to climb Camelback Mountain. That won’t happen today; I think we’ll look for signs of life in the pool here, then see what’s going on in Old Town Scottsdale tonight, before catching the Brewers-Padres game on Tuesday.

Stay tuned for more adventures in the desert to come.