Last week, Shake Shack rolled out a brand new offering: Chick'n Bites. But are they good? We paid a visit and gave them a try.

It’s a recipe that was tested in the brand’s New York Innovation Kitchen (ironically housed in the space that was home to Thomas Keller’s critically-acclaimed Rakel in the 1980s) and rolled out at the West Village Shack last September, where the nuggets apparently made quite the splash.

As a result, Shake Shack has introduced them in locations across the country for a limited time. And, of course, we had to try them.

But are they good?

Let's put it this way: after eating these you might just rethink chicken nugs.

Unlike most fast food chicken nuggets, which are nothing more than spongy molded pieces of mechanically processed meat, these nuggets are simply chicken breast that’s been cut into pieces, cooked via sous-vide, battered and fried.

And they’re pretty darned good. The tender meat is juicy and flavorful enough, but the real star of the show is the breading. It’s craggy and crisp with a light texture that varies in crispness from subtle to more seriously crunchy on the edges. In fact, the nuggets come the closest to the texture and flavor of well-executed pan-fried chicken that I’ve found.

In keeping with that resemblance, the batter is seasoned well … maybe with a touch of garlic and black pepper and just the right amount of salt. 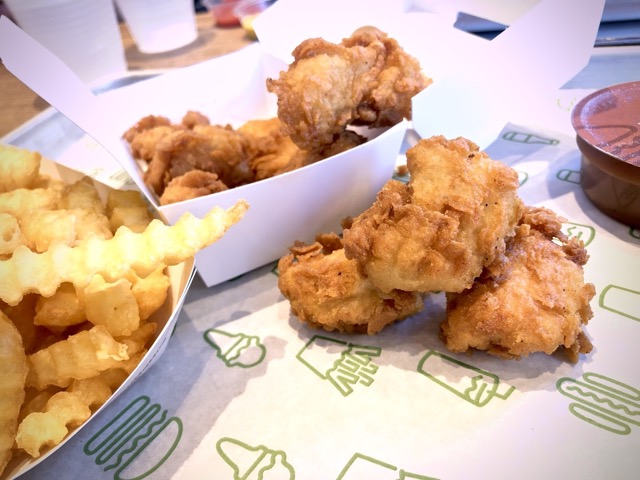 In fact, their biggest failing might be that the light, flaky breading is a bit fragile and tends to separate from the chicken when you bite into the nugget.

Chick’n Bites, which are priced at $3.99 for six pieces or $5.99 for 10, come with either barbecue or honey mustard sauce (I tried them, and the honey mustard "wins"), but the real pros will reach for the Shack’s buttermilk herb mayo or the the bottle of hot sauce on the counter. Cheese sauce is also an option; but that’s best left for the French fries, if you ask me.

While you're there, it's not a bad idea to try the mango coconut lemonade (it's like a lovely, tropical retreat in a cup) or the seasonal salted vanilla toffee shake ... yeah, be sure you try the shake. If you love the sweet-salty combo, it's a no-brainer.