A golf course is a living thing, with insects, grasses and trees all affecting how it plays on a given day. All of those things, and a host of others, must be managed daily by that course's superintendent to make it playable for the golfer. It's a long day, with a lot of duties and I gave it a try.

A golf course is a living thing, with insects, weather, grasses and trees all affecting how it plays on a given day. All of those things, and a host of others, must be managed daily by that course's superintendent to make it playable – and aesthetically pleasing – for the golfer. To work it requires a long day, and there are a lot of duties.

I traded places (well, kind of) with Brown Deer Golf Course superintendent and Milwaukee native Tim Wegner to get a better feel for what exactly he does, and I found out how hard it really is.

Your work day begins nearly when the clock does in the summer, with Wegner rallying his team in the maintenance building when most others are sleeping.

On my way to the golf course located at 7625 N. Range Line Rd., I saw only two oddly motivated (or cross-wired) runners and an annoyed man with a dog, along with two cars.

This is what the outside of the office looked like upon arrival: 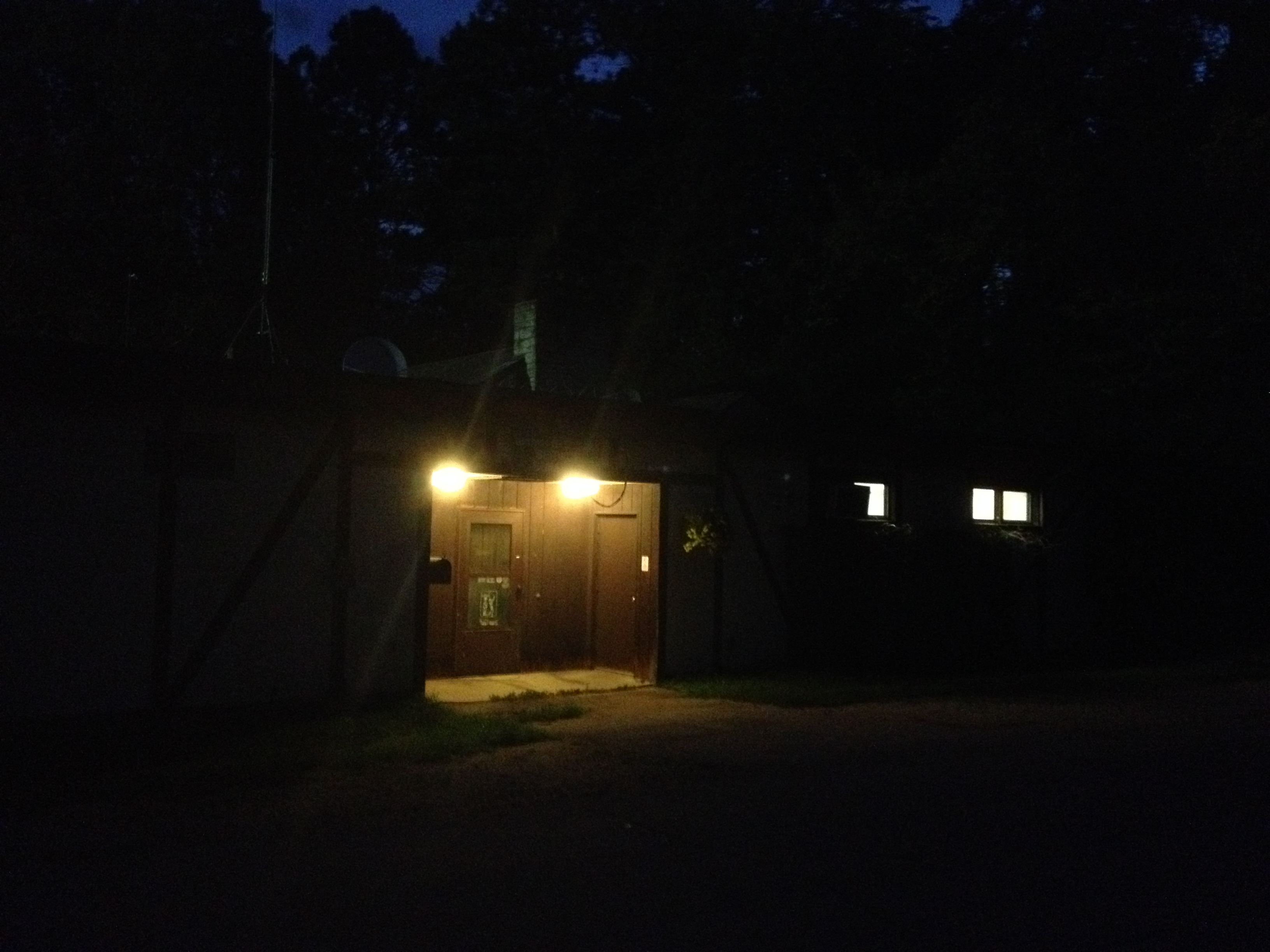 Now, in the late summer, Wegner’s crew is a little smaller – it’s at nine people now that school has started, down from 14. In the near darkness, we hit the course in a cart make a quick check of the property – making sure nothing unexpected or severe happened overnight – while picking up loose debris.

"Kinda the nice part of the morning," Wegner says.

We also take a look for disease that may be growing on the fairway grass – its light coloring makes it easy to spot in the near-darkness. That helps Wegner determine how much chemical to use, and where to disperse it.

The light comes fast, and the crew is already hard at work mowing the greens. With a smaller crew, the tasks of changing the cups (the flag placements) on the greens and mowing the putting surfaces require immediate attention.

This is where he put me to work. 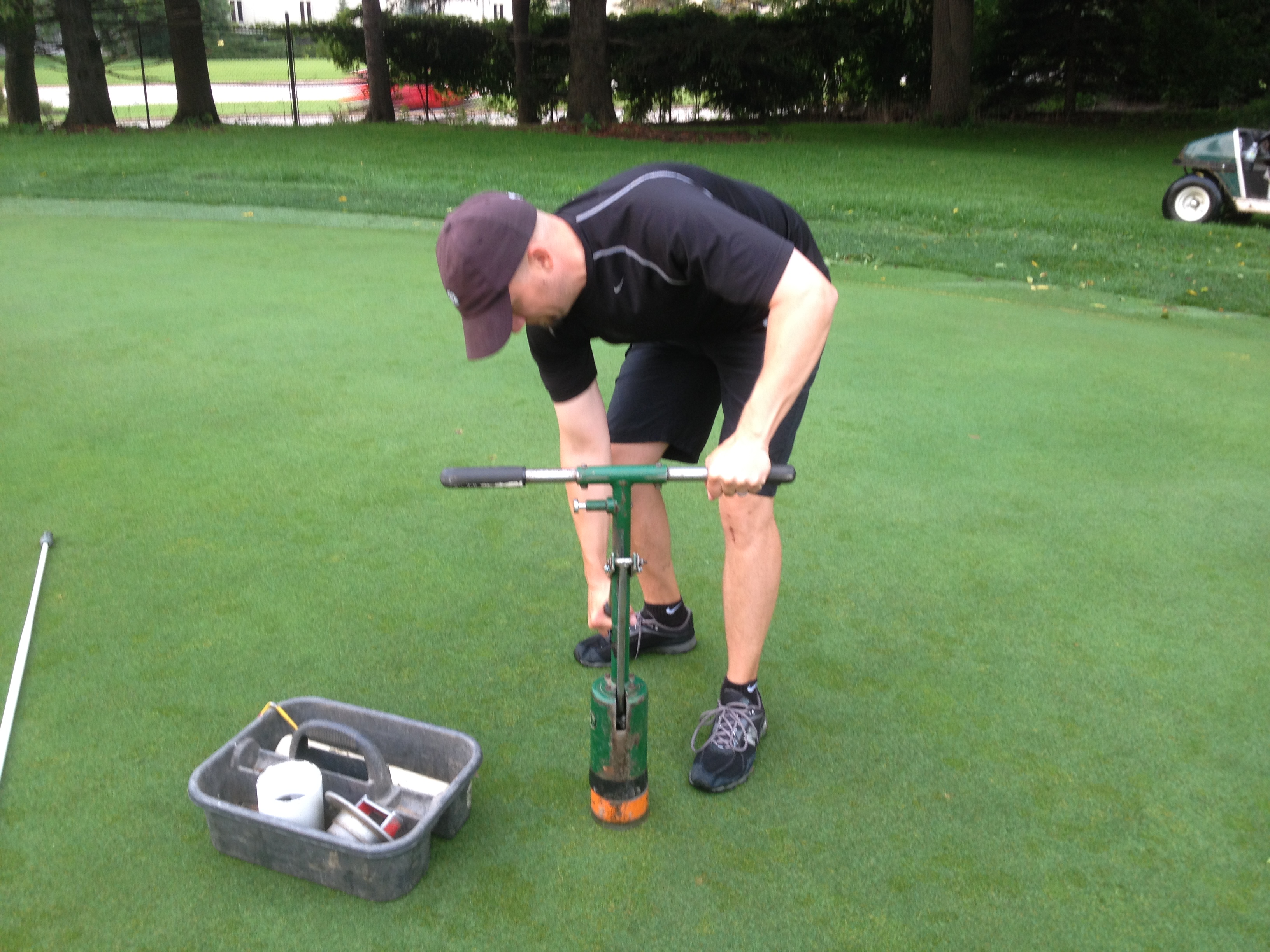 To change all 18 holes is a process that takes about three hours, and it’s not just as simple dropping a cutter in the grass to make a hole. It requires a lot of thought and a little bit of luck. First, you need to examine the area of the green in which you are going to put the new cup – is it suitable? Was an old cup in the same area? Is it on an unfair bit of mounding or angle? What does the approach shot look like coming in from the fairway? If it’s going to be a 85-degree day, will this placement be fair for players later when the green gets faster?

As a player, I really stressed over this decision. Was I being fair? How would I feel about these placements? Wegner even told me to speed up after I continued to hem and haw on the third green.

Once I decided on my cup placements, I used the HIO "heavy" hole cutter to create them, which requires you to slam down on the handle to push the cutter into the turf. It requires a good bit of force to do this, but you can’t Hulk out on it – you can only go to a certain depth (which is marked on the cutter by orange paint). You then need to twist it to break roots and dirt underground apart, which also required more effort than I imagined.

You also need to make sure the cup is level. Then, you take that removed piece of earth and fill the old cup with it. This is an important step – it has to fit nearly perfectly so it’s level to the surface around that not just for putting, but so it’s not scalped bare by the mowers. To do this, I used a modified fork and a PVC pipe with its edges smoothed so as to not to scar the greens – tricks Wegner learned from PGA Tour agronomists when the course hosted tournaments.

After changing three cups, I got it right on the fourth hole, the par 5. I placed the cup just over the right hand bunker, requiring a precise shot to the stick or a safer play that would result in a longer putt.

Wegner got out of his cart. "That's ideal. And the cup was pretty straight."

He then drove me over to meet Steve on the par 3 11th hole.

"We'll trust you with our most treasured asset," Wegner said. 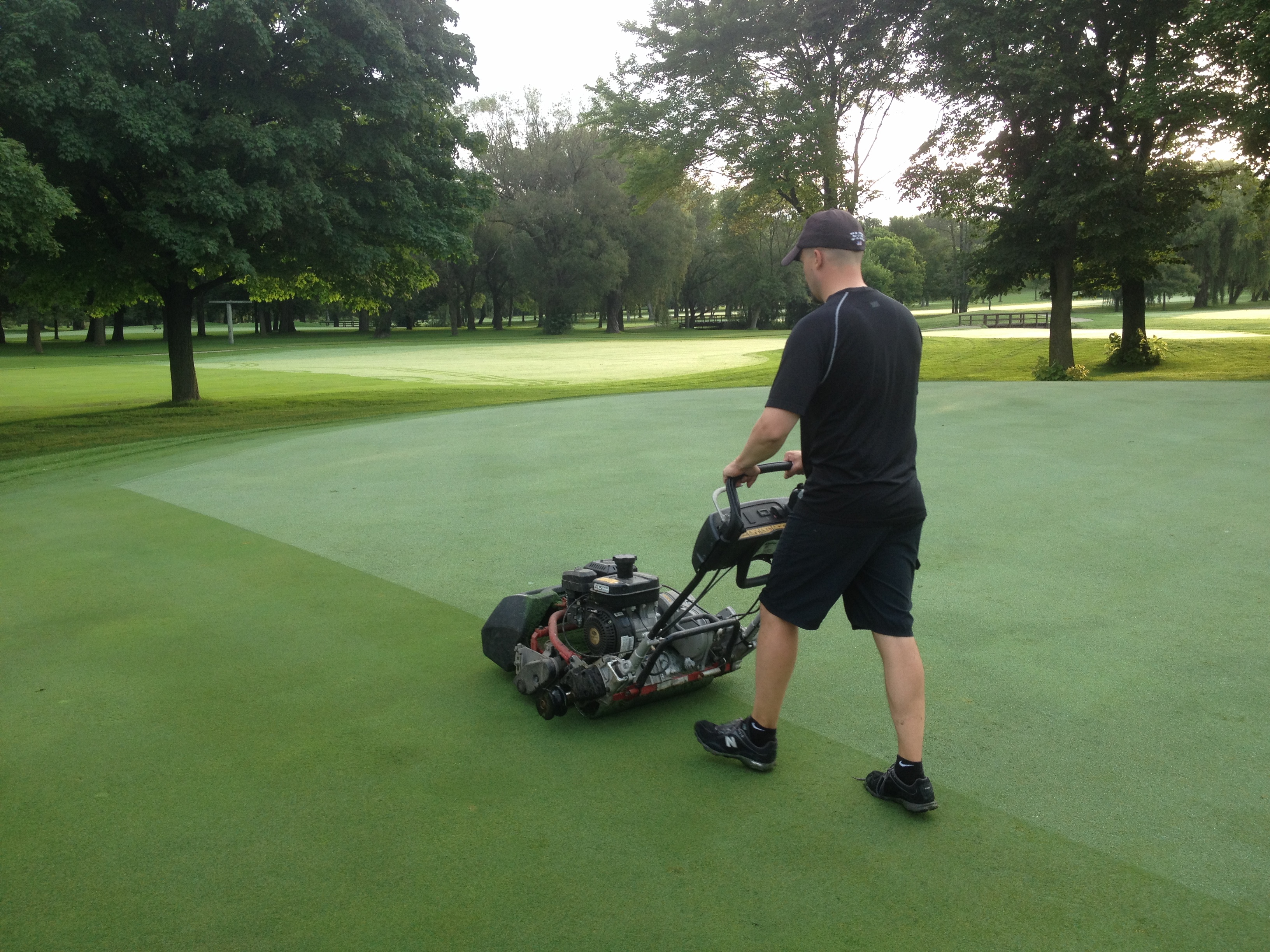 Drenched in sweat, Steve was happy to see me – I was about to give him a hand with the 250-pound hand mower.

The green cutters at Brown Deer walk five to seven miles pushing those things (and it’s a nearly three-hour job), and while the machines are motorized, a newbie like myself definitely felt all of that weight. These machines provide an eighth of an inch cut, so they are checked every day to ensure they are working properly. It also requires the mower to make sure no stray pebbles or sticks are on the surface. Such fine blades can be damaged by even the smallest debris.

I’ll be honest – this scared me to death because of how important the greens are for any golf course, especially one with the status of Brown Deer. I had to raise the mower at the precise right moment near the collar so as not to shave down that taller grass around the green. I then also had to set it down at the exact right moment coming back.

I also had to make sure to keep the blades on the ground, which sounds ridiculous, but that machine is heavy, and I had the "death grip" on it, as Wegner said. When that happens, the mower can sort of lean back on the handle, which could leave miniscule "mohawks" of tall grass. And on a green, that’s a huge no-no.

You also have to mow in a certain pattern, which is predetermined on a chart in the maintenance building. That day’s cut was right-to-left and honestly, I just assumed I was going in the right direction because no one yelled at me otherwise.

This was not fun for me – I was totally paranoid that I was going to leave a huge scar across the putting surface. But, I definitely gained a greater respect for the care and skill of those who do this daily. As Wegner said, it looks a lot easier from afar than it really is.

But that’s not all the attention the greens get, leading me to ... 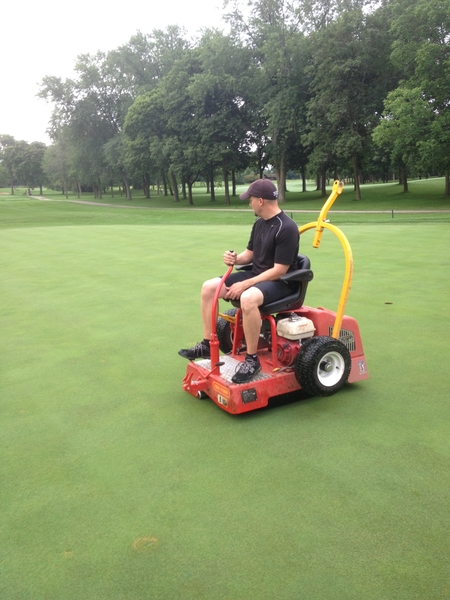 I met up with Andy to jump on this roller which is as fun as it looks. It takes some getting used to as you drive sideways and use both feet to run the machine, and you have to have some forearm strength to steer, but it’s pretty fun to zoom around on this thing.
Now, I wasn’t "zooming" necessarily – I saw Andy on a green earlier and that dude can move – but you can’t really hurt anything with the roller because it just flattens the grass, which adds about a foot and a half of speed to the surface. The one thing that an operator needs to know is that you can get stuck on some of the undulations, so if you get on the wrong side of a hill, you’ll need to get off and push it back onto a flatter area. 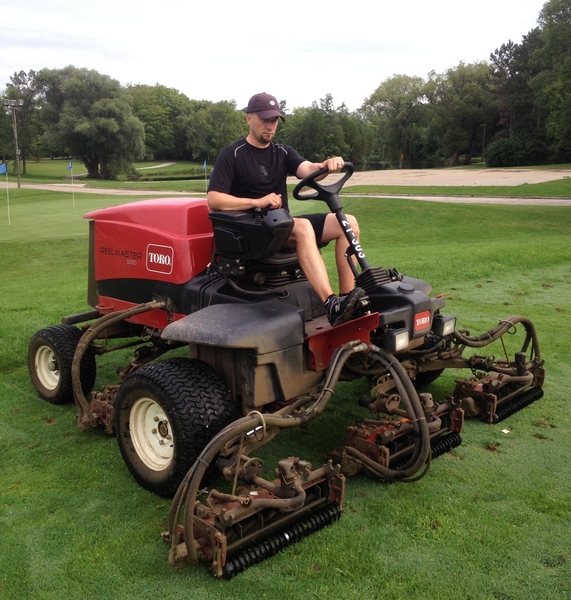 Wegner said they’d ideally like to mow fairways later in the afternoon with drier grass, just so that the clippings disperse naturally. But, in the mornings or on wetter days, workers with blowers will trail the mowers to blow the clippings away.

The mowers only go four miles an hour make sure all the grass is cut, and as Wegner said, it’s important to do it right because it’s the showpiece of the hole as a player looks out from the tee box. The driver also needs to know where the blades on the mower line up, so as not to accidentally scar up the rough or the edge of the fairway, like I did here in the practice area (yes, practice area): 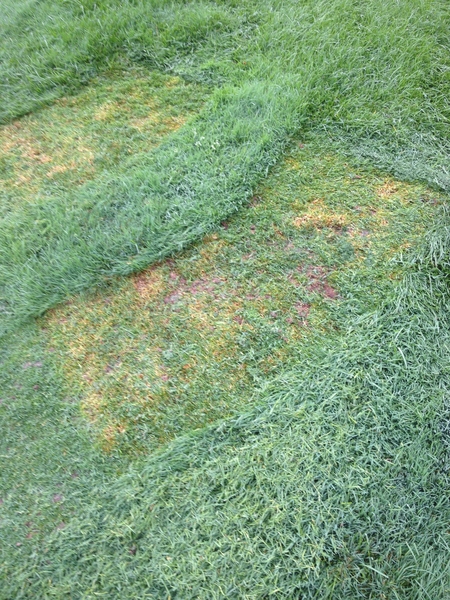 Yeah, that wasn’t a good one – which is why I just worked on that area of the property as opposed to the one golfers play on.

There is another, larger mower, that is 16-feet wide and is pulled behind a tractor that mows the rough.

On a good day, that machine can mow around 80 acres.

This is also a huge time commitment, especially because a fairway mower will be out there during play. If they see a player on a hole, they need to pick up the blades and move into the trees – and perhaps even cut the engine depending on how close they are to the player. Two people out on the course cutting fairways takes around four hours.

These are the most time consuming and important jobs Wegner does – and he does do them.

"He's out there," head pro Scott Evans said. "He gets his hands dirty every day."

But, that’s not all that’s done. Wegner and his crew also makes sure to trim the grass around the yardage markers in the fairways, re-paint them and the ball washers, change out the garbage, move the tee markers, not to mention the daily maintenance and cleaning of the equipment.

"It's the little things," Wegner said. "Would most people notice? No. But if it adds up, you do."

I’ve been around the game of golf for over a decade, covering it from – what I thought – all angles. Jumping into Wegner’s shoes for the day was eye-opening. As an avid player, I’ve always appreciated what a superintendent and his crew does to make a course playable, but I now have gained a deeper respect for their work, and how hard it really is to make the game enjoyable.

"You're welcome back anytime," Wegner said on my way out the door.

After my day there, it was probably the greatest compliment I could have received.

Oh, and for comparison's sake, this is what the office looked like when I left: 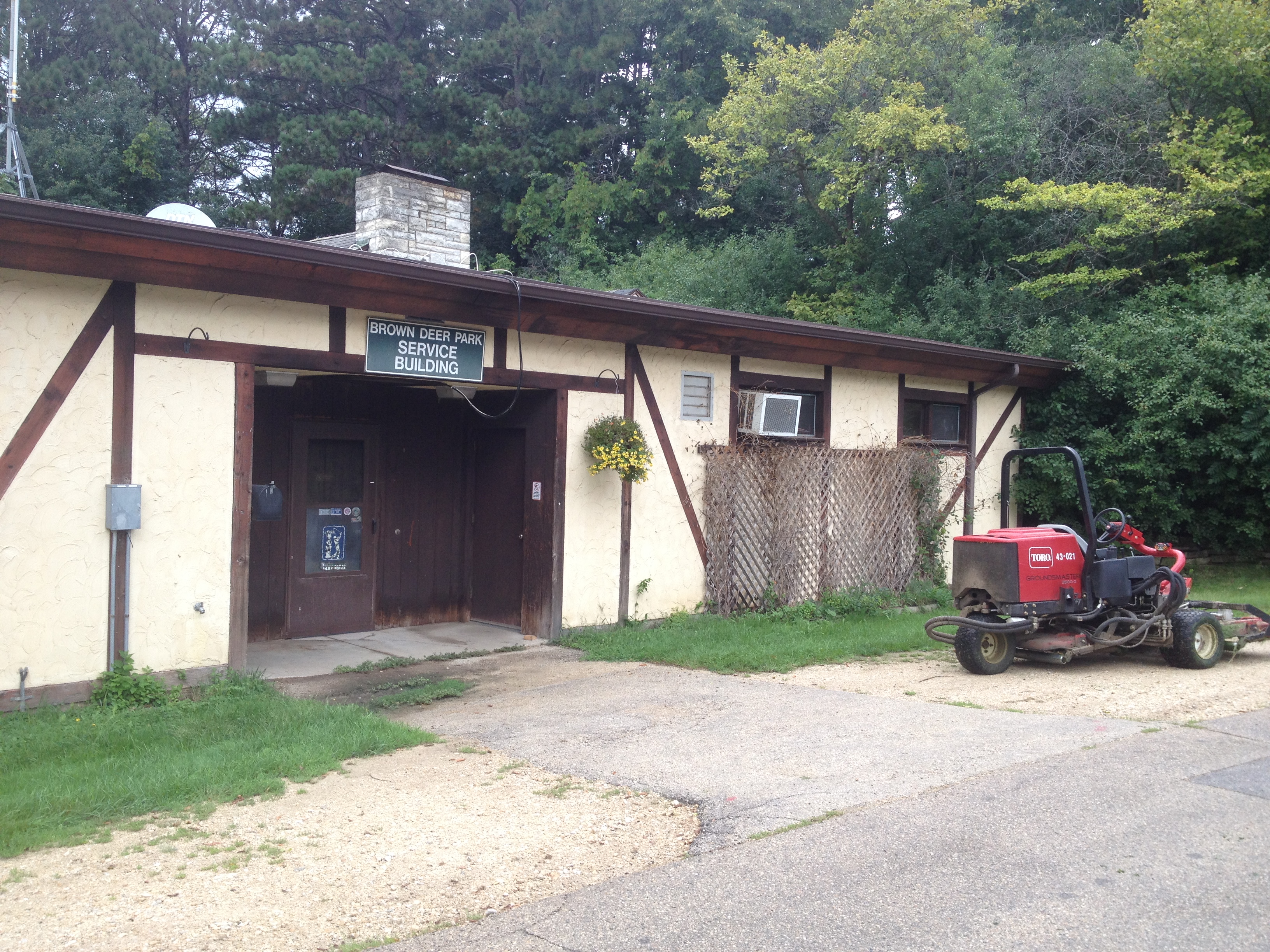