If you haven't been to St. Francis Brewery in a while, it might be worth your time to return. After all, the South Side brewpub has undergone numerous changes to its beer program thanks to brewmaster Matthew Hofmann, who took over brewing operations in May 2017.

If you haven’t been to St. Francis Brewery in quite some time, it might be worthwhile to return … maybe even this weekend.

After all, the South Side brewpub has undergone numerous changes to its beer program thanks to brewmaster Matthew Hofmann, who took over brewing operations in May 2017.

Under Hofmann’s leadership, the brewery will kick off a new barrel aged beer series on Saturday, Jan. 13 with the release of its first bottled barrel-aged beer, Snuggle Bunny.

Despite it’s cute moniker, Snuggle Bunny is anything but. It begins with a big, chocolate-filled imperial stout that’s been aged for months in bourbon barrels with cocoa nibs and orange blossoms, giving it a floral and citrus aroma along with notes of bourbon, vanilla, coffee, caramel and roasted nuts. And at its 11.4% ABV it's sure to warm the cockles of your beer-loving heart.

The hand-bottled beer will be released in 22-ounce bombers, which will be sold for $13 each. And, since the beer is limited to 200 bottles, there will be a limit of four bottles per person. A limited quantity of the beer will also be available on tap.

It’s the first barrel aged bottled brew released by the brewery. However, it’s among numerous barrel-aged brews created by Hofmann over the past few months.

The first was TEOTWAWKI (The End of the World As We Know It), a bourbon barrel-aged Imperial brown ale brewed with grilled sweet potatoes, molasses, vanilla, cinnamon and pecans. Released last October, it was one of myriad new beers Hofmann has brought to the table during his tenure at the nano-brewery and restaurant.

"I was happy at 3 Sheeps, but I saw the advertisement for a brewer at St. Francis Brewing and I was curious," he says. "I was really drawn to the idea of being able to follow my own vision for the beers I’d create. So, I decided to apply." 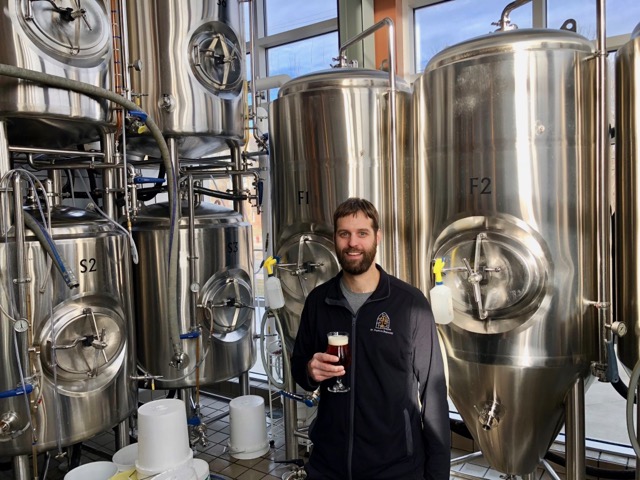 Hofmann says he spent the first few months as brewmaster getting a gauge of the types of beer folks at the brewpub were looking for. From there, he says he began experimenting with a variety of styles and recipes.

"So far I’ve been concentrating on more approachable beers," he says. "But I’d really love to broaden our audience. So, I’m taking more traditional beers and pushing them a bit. I want them to be accessible to both casual drinkers and beer geeks."

You can see a bit of Hofmann’s style in seasonal brews including St. Francis Weizenbock, a brew that captures the best of both a dunkelweizen and a bock as well as Golden Eye-PA, an American IPA brewed with British ale yeast that boasts a bouquet of pear, pineapple, gooseberry, spicy wood and a hint of pine. There’s also a coconut imperial stout and peanut butter porter, both of which bring creative notes to classic well-known styles.

Hofmann says he hasn’t touched the recipes for the brewery’s six core beers: Greed (a session IPA), Envy (English IPA), Lust (Weissbier), Sloth (nut brown ale), Wrath (amber) and Kitzinger Kolsch. However, he says he’ll be playing with the recipe for Greed during the next few months, recreating it as a beer that’s more heavily influenced by New England style IPAs.

He also releases at least one new beer a month. This week, he’ll debut debuting a Belgian blonde ale brewed with fresh apricots. Belgian Sunrise, at it is named, will be available beginning Wednesday, Jan. 10.

"It’s a traditional blonde with a light sweet flavor," he says. "There are notes of honey, bubblegum and pear along with a good bit of apricot on the nose. It’s slightly dry and a bit tart from the apricots, but pretty easy drinking."

Hofman says one of his more immediate goals is to maintain one of the most diverse tap lineups of any brewery taproom or brewpub in the metro area.

"Part of that will include a solid representation of classic styles," he says. "But also several modern and experimental beers."

That will include pilot and small batch beers produced on the brewery’s pilot system, as well as a number of additional barrel aged beers.

"I’m anticipating we’ll be able to release three or four barrel aged beers a year," he says. "So far, I’ve put some of the Belgian Sunrise into a Chardonnay barrel. We may bottle that as a release for when the weather warms, maybe May or June. I also have two cognac barrels that I’ll be filling with a barleywine that I’ll be brewing toward the end of this month."

During the release, the brewery will also offer a rotating selection of six beers from its 12 Beers of Christmas series, which includes options like:

The beers are available in limited quantity and will be available as 8-ounce pours or flights. And the first 20 customers to order a flight will receive a commemorative tasting glass.

Interested guests can also get to know Hofmann a bit better during three special brewery tours during which he'll chat about the techniques he uses to create St. Francis brews. The tours will take place at 11:30 a.m., 12:15 p.m. and 1 p.m.