With a grand new entrance, a state of the art museum, expanded and upgraded park grounds, a new cafe and more, St. Louis' Gateway Arch is ready for the future.

ST. LOUIS – The Gateway Arch in St. Louis is a soaring statement.

Thumbing his nose at gravity and the perceived limitations of engineering, Finnish architect Eero Saarinen – who also designed Milwaukee’s War Memorial Center, among other notable works – took fellow architect Daniel Burnham’s oft-quoted urging to "make no little plans" to heart, and to the drafting table, creating the kind of one-of-a-kind symbol for the city of St. Louis that blew the competition out of the water. 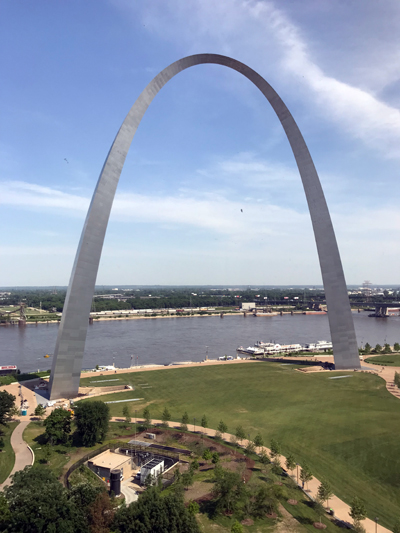 So, it’s always seemed a little dichotomous that one had to (figuratively speaking) burrow beneath the ground in order to visit the observation area at the top of the Arch.

Well, that’s about to change.

On July 3, a new visitors center, designed by Cooper Robertson – will celebrate its grand opening at the Gateway Arch, alongside a new museum, and expanded and renovated park grounds, giving this most recognizable of American landmarks the kind of front door it really deserves.

Via a new landscaped connector laid atop an expressway that has long separated the Arch and its park from the rest of downtown St. Louis, visitors now find themselves face to face with a circular, glassy entrance – including a fountain and seating out front – that allows them to gently descend underground into the welcome center. 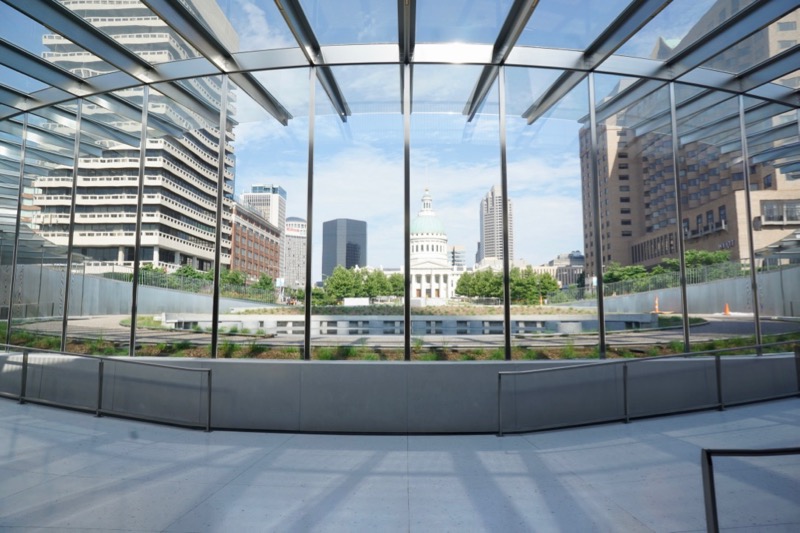 Once inside, one can’t resist the view back toward the city – a view which frames the Old Courthouse as the centerpiece in a stunningly modern tableau. Have your camera ready. 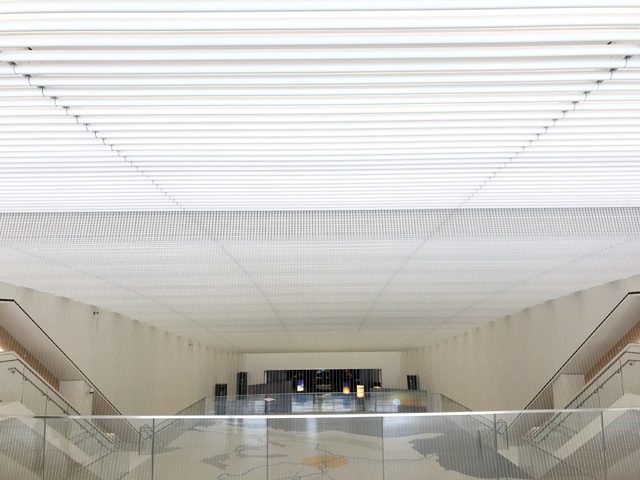 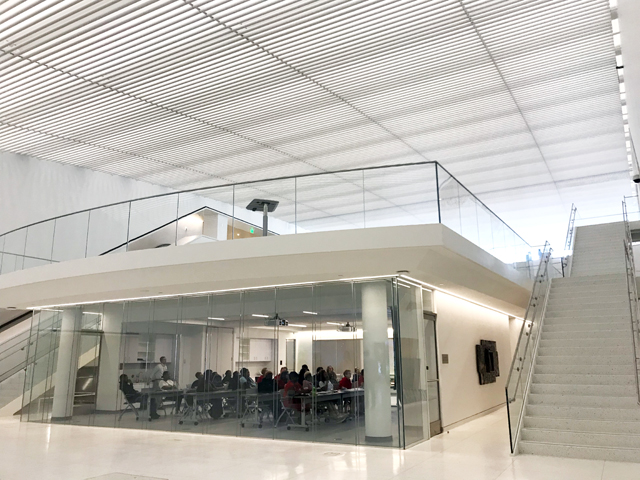 "Historically what was happening is you were underground, effectively in a basement, and by adjusting the space and moving closer to the city and bringing in natural light, what we've done is not just create a better connection, but we brought that feel of natural light and just that view back to the city, into the space, which never existed before," says Eric Moraczewski, executive director of the Gateway Arch Park Foundation, which led the charge to raise funds for the transformation of the park.

"We added 46,000 square feet to that space, but also really brought it back a lot closer to the city so that we could have a very direct connection."

"Clearly Saarinen always had this idea that there should be this grand entrance into it, and so I think – in a different way than what he originally thought – we were able to create a grand entrance to what is truly a masterpiece."

It’s hard to believe that one is even underground when you’re in this new entry hall, which houses the security lines and, just beyond, a pair of staircases flanking a conference room below.

While you wait to pass through security, you can marvel at the terrazzo map of the United States on the floor, executed, like much of the project, by local tradesmen.

"We'll have children down here moving historic props and story props and historic characters around," says Rhonda Schier, chief of museum services and interpretation for Gateway Arch National Park, "to figure out where their significant places were in history, and identify the National Park Service’s 400 units, with some of them being 3-D models on the terrazzo map."

Down the steps is an area with state of the art projection screens showing a variety of images related to the westward expansion that the Arch was built to celebrate.

Follow them right to the entrance to the new museum.

As we approach the museum that has replaced a smaller one installed in 1976, 11 years after the completion of the Gateway Arch, Schier says, "everything about this museum experience is interactive, participatory and dialogic, where visitors can talk among themselves and with the staff and have hands-on activities, and really engage through multiple senses about the stories we have to share. We want it to be a really active, participatory learning community." 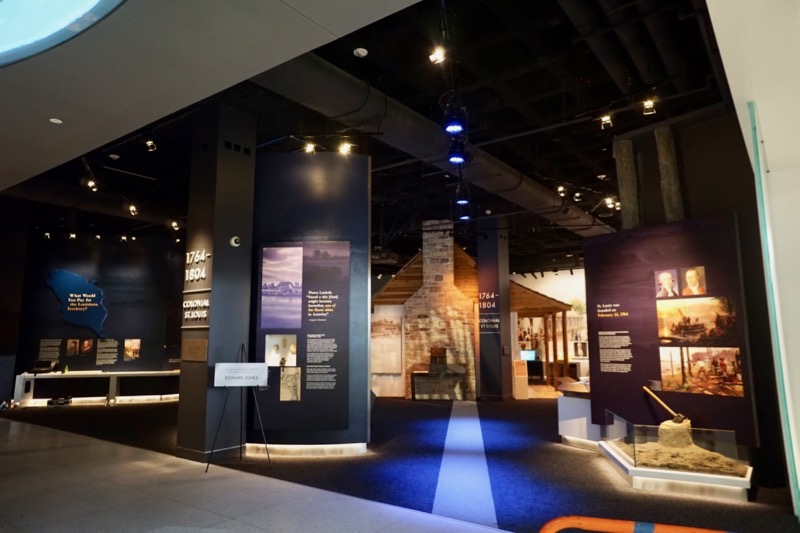 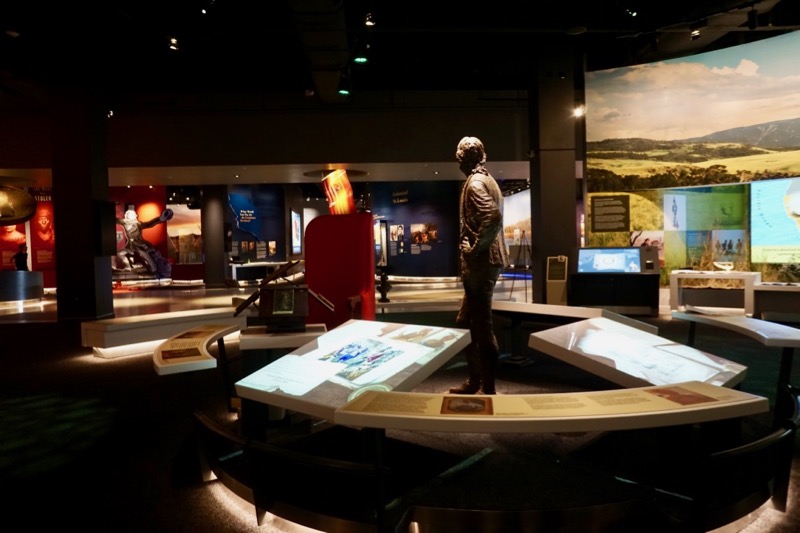 That’s a pretty massive change from the previous museum, which was created in an old-school style, relying heavily on dioramas, text panels and a beloved stuffed bison. Also, the museum focused specifically on the westward expansion and stopped cold in the 1860s.

"The old museum was a little bit of cowboys and Indians, with a wild west theme to it," says Moraczewski. "We've added 101 years of the history that's being told here."

The new museum spends much more time exploring and discussing the impact of westward expansion on the native peoples that already lived on the land.

What you’ll find now is extremely interactive, as Schier promises, thanks to the forward-looking approach of Haley Sharpe Design, based in Leicester, England. There’s even an exhibit that requires you to engage your sense of smell.

There’s also an area that looks at St. Louis in the late 19th and early 20th centuries, with a great miniature recreation of the vibrant neighborhood demolished to make way for the Arch. That neighborhood – rebuilt after a terrible fire – had one of the largest collection of buildings with (fire resistant) cast iron facades in the world.

Even better, for the first time ever, the museum has deemed the Arch itself worthy of inclusion. In this area you’ll learn about Saarinen and his works, you’ll get to see the models that architects submitted to the competition to create a monument on the Mississippi Riverfront in St. Louis (spoiler alert: the arch won, and deservedly so), as well as Saarinen’s own original models for the arch.

Behind one of them, you'll spy a photo of the Milwaukee War Memorial Center. 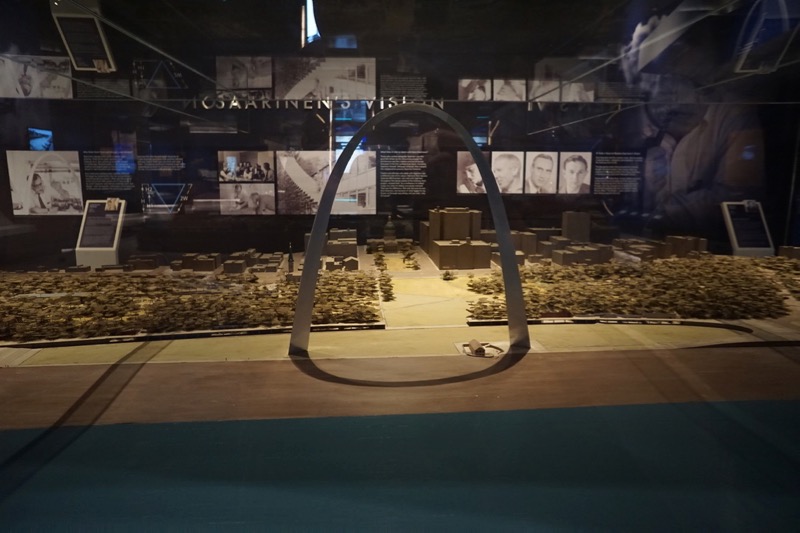 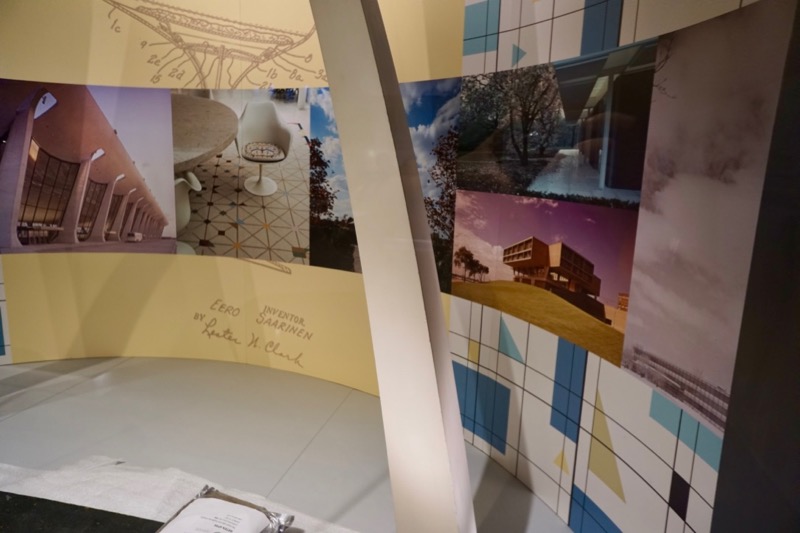 "We had a museum that came in 11 years after the completion of the arch, so you would have thought by that time they would've said 'this is so important'," says Moraczewski. "But they kept the focus of the museum on westward expansion during the 1800s.

"The expanded history really makes such a big difference. We're able to really create that bigger, broader story to it all, including building the arch, which is one of the true icons and almost wonders of the world, if you think about how difficult that would have been to build at the time."

Beyond the museum is the original footprint of the welcome center, which includes access to the trams to and from the top of the Arch. 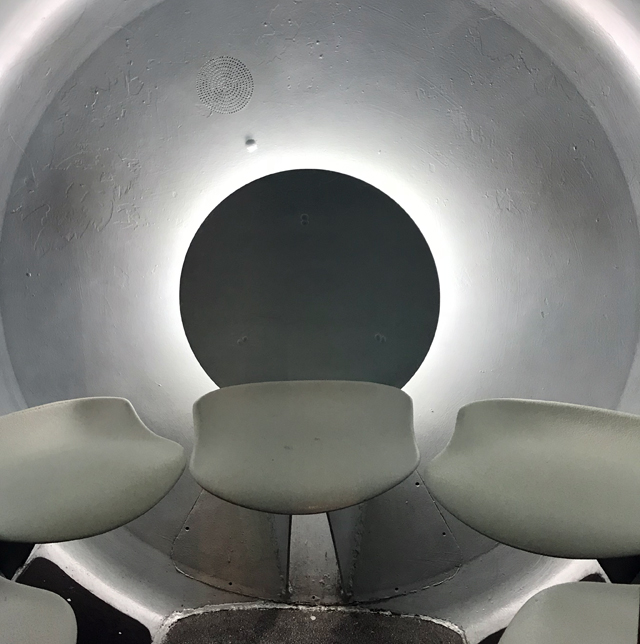 Behind the scenes, the tram equipment has been upgraded. Fortunately, front of house, the tram cars still have that great "2001: A Space Odyssey" glow to them. And the experience at the top is unchanged.

While you wait for your tram, there’s now a breezy, highly stylized ‘60s-themed animation projected on the concrete walls, as well as a quiz led by an Arch team member. 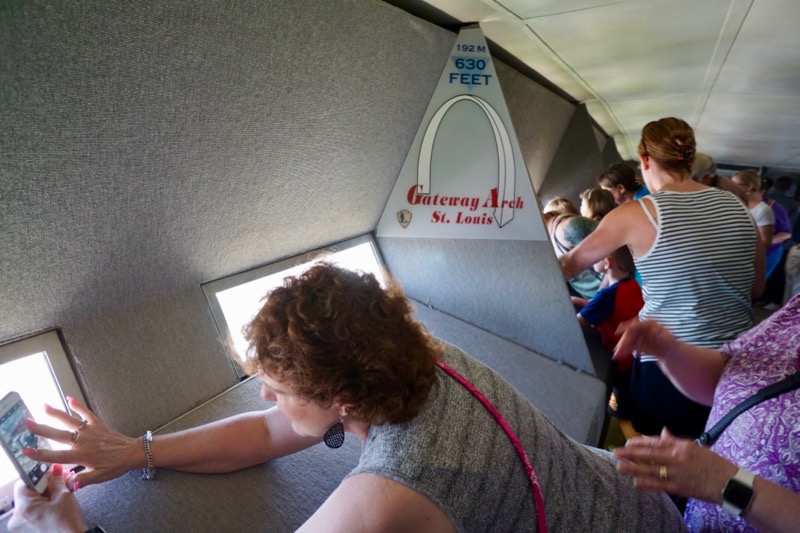 The gift shop was recently expanded and by the time you read this a cafe will be open, too.

The latter is a massive upgrade because now, if you’re waiting and the kids (or you) get a hankering, there will be food and beverage options available to soothe the hangry beast. In the past, you’d have had to not only leave the Arch, but head either to food trucks along the river, or a few blocks west into downtown to get something.

Back out in the sunshine

When your eyes readjust to the sunshine, you’ll see that the park that surrounds the arch has gotten a makeover, too. The biggest change is the addition of acreage to the north, where a parking garage was demolished and converted to more parkland.

There are winding paths, water features and more, and the space is especially lively in the warmer months, offering entertainment not only to tourists, but also to St. Louis residents. 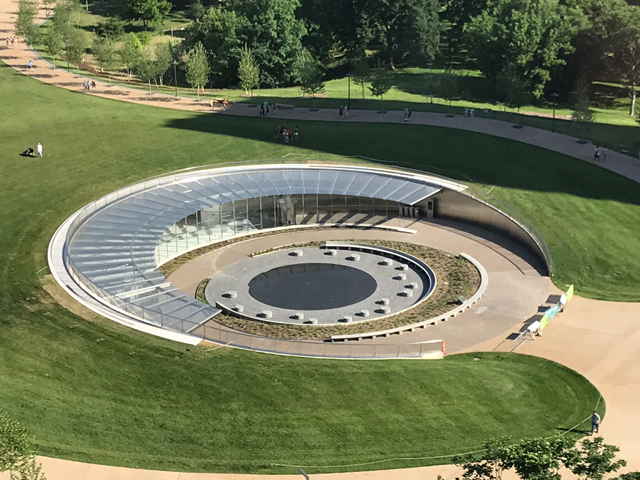 "In addition to being a great space that people are using now who are coming in and they're staying in the hotels downtown and so they're using it to go out for a jog or whatever and the in the mornings or go for a walk in the afternoons, it's also become the neighborhood park for all the people living in downtown St Louis," says Moraczewski.

"We've got all kinds of events going on, like our Blues at the Arch concerts, our Arch Bark, our Kiener Cocktails and Kiener Kids (events) and our health and wellness series. Those are all there to give people, especially in the community and the region a reason to utilize this part the same way they do so many of the other great parks in St Louis." 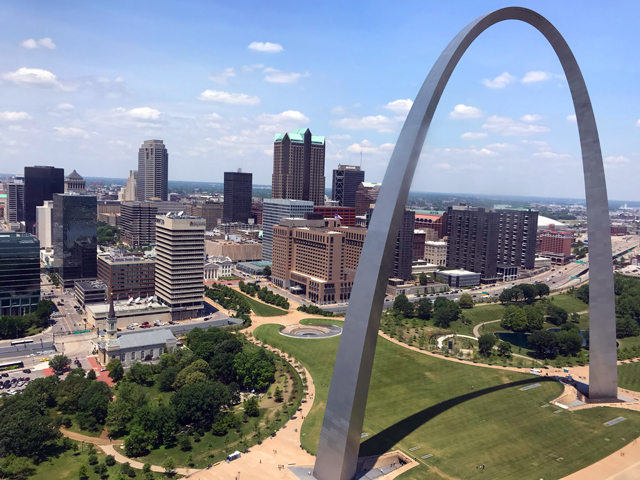 The result is a series of upgrades that benefits St. Louis and makes the Arch even more welcoming to visitors, says Moraczewski.

"It's been, for us, 10 years in the making, so I think we were at a point that we really saw a good opportunity to catapult ourselves to the future," he says.

"We've enhanced the museum, we've improved the park space, we've created better connection. All of those are giving a visitor coming here today that A-plus experience that they want and deserve when they come here." 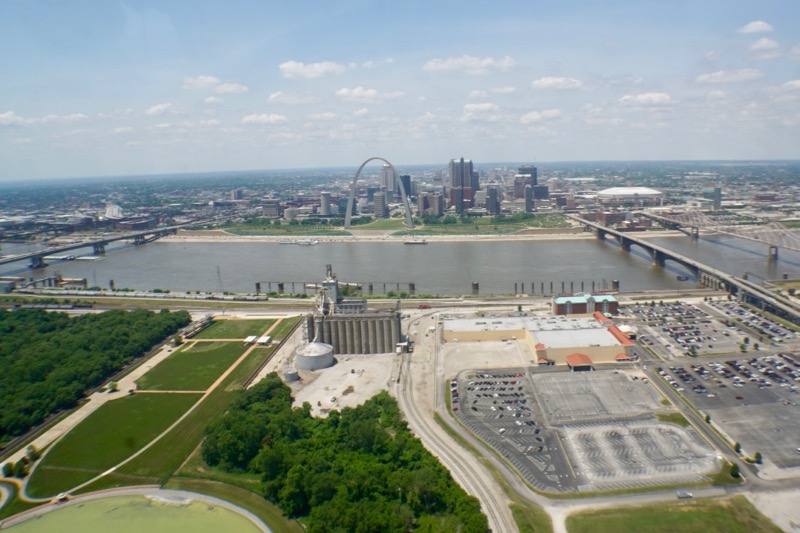 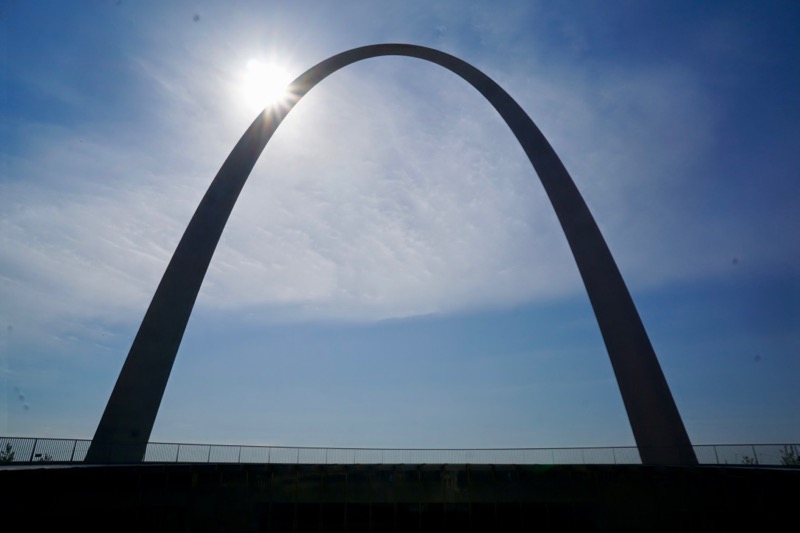