Site prep work is complete for the three power substations that will help run The Hop Milwaukee streetcar, slated to go online next year. Here is some information on them.

There's quite a bit of activity on the corner of Market and Wells Streets lately, what with the lighting of the city holiday tree and the beginning of deconstruction work on the BMO Harris Bank parking structure. But there are also some changes in the works on the northeast corner of that intersection.

Lately, some landscaping was removed and a concrete foundation laid behind a chainlink fence.

The foundation is for one of three Traction Power Substations (TPSS) that will help run The Hop streetcar system, the first phase of which will be online next year.

Though City Engineer Jeff Polenske says there are no drawings of what the substations will look like, he did describe them for me.

"The Traction Power Substations will be approximately 14 feet by 40 feet and 14 feet in height," he says. "The TPSS being installed in the open space at the north east corner of Market Street and Wells Street will be located towards the back, adjacent to the small parking lot behind the 809 (Broadway) Building. 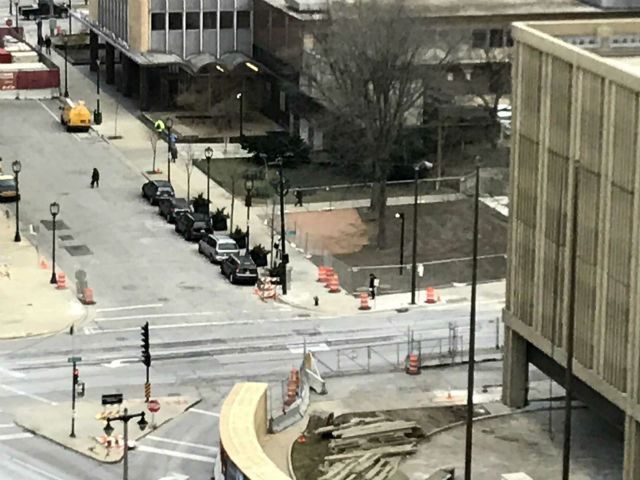 An aerial view of the Market and Wells site.

According to Polenske, the TPSS will be a simple rectangular structure with brick-like facades on the south, north and west sides. Several metal access doors will be on the east side of the building, which faces in toward the DPW parking lot on the site.

"The concrete foundation that the TPSS will be installed upon is now in place and only takes up about one tenth of the site. The remainder of the site will be returned to public green space after the TPSS is installed."

Polenske says there will be three TPSS for the streetcar. One will be next to to The Hop’s Operation Maintenance Facility (OMF) – where cars will be cleaned, repaired, maintained and stored – which is currently being constructed beneath I-794, adjacent to the Stone Creek Coffee roastery and cafe, on North 5th Street and West Clybourn Avenue.

A third TPSS will go up on Cass Street, south of Ogden Avenue. All will be roughly the same size and of a similar design, visually speaking.

According to Polenske, site prep work has been completed for the three TPSS and installation on the one at the Operation Maintenance Facility will begin January. The other two are slated to be completed in spring.