While the installation on Saturday of a sign wasn't a major logistical advance in the Milwaukee Symphony Orchestra's massive undertaking to renovate the 1930 Warner Theater into its new Bradley Symphony Center, it was definitely a high-profile one.

While the installation on Saturday of a sign wasn't a major logistical advance in the Milwaukee Symphony Orchestra's massive undertaking to renovate the 1930 Warner Theater into its new Bradley Symphony Center, it was definitely a high-profile one.

The new sign is an exact replica of the original sign installed on the grand Wisconsin Avenue cinema, 212 W. Wisconsin Ave. It was created and installed by Milwaukee's Poblocki Sign Company.

Sometimes it is hard to show scale of a sign. This Warner Theatre blade sign was installed over the weekend in Milwaukee, WI. Before it went up, some of the team who worked on this sign stood next to it to show how large a 50' sign really is. #bladesign @MilwSymphOrch pic.twitter.com/JnYONyC9NP — PoblockiSignCompany (@PoblockiSignCo) May 11, 2020

In terms of complicated moves, the sign installation early Saturday was nothing like the moving of the east wall of the theater last August. But, still, it took a few hours and seeing it hanging there makes the project feel even more real to passersby.

The original sign was removed in 1966, two years after the theater had been renamed the Centre. Its whereabouts are unknown and most likely it was not saved. (You can read more about the history of the theater in this Urban Spelunking article.) 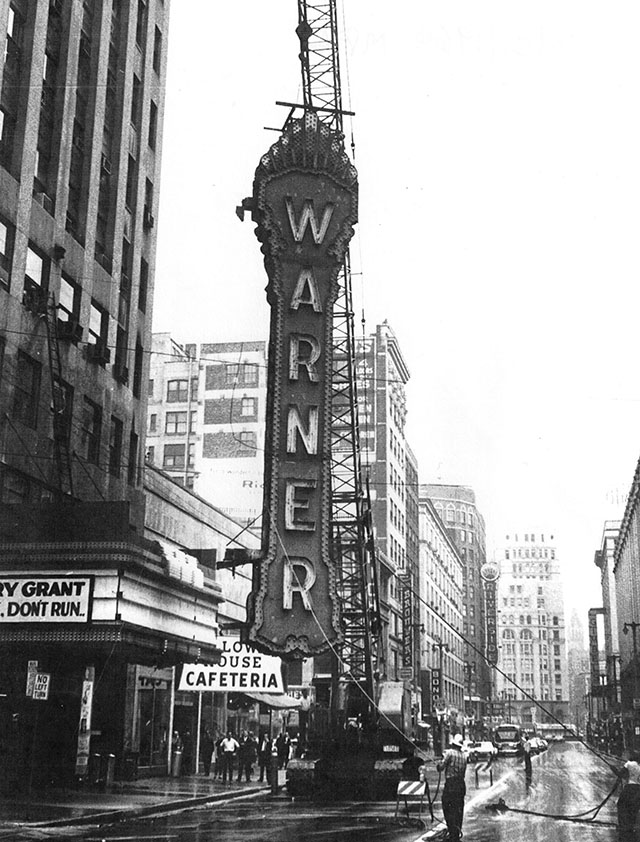 The removal of the old sign in August 1966.
(PHOTO: Courtesy of Milwaukee Symphony Orchestra)

The Symphony announced in February that its new home and performance venue would be named the Bradley Symphony Center, but the blade sign still says "Warner," as a nod to the long history of the Art Deco movie palace.

The sign is expected to be lit when the marquee is installed in June or July.

The venue is expected to be ready in the fall of 2020 for the MSO's 2020-21 season opener. In March, the MSO announced a performance next year by cello virtuoso Yo-Yo Ma and Kathryn Stott.

UPDATE: Poblocki is currently creating the pieces for the marquee, like the one pictured below, and it is expected to be installed in the coming weeks.

The marquee display construction is coming along in parts, here's a peek at one of them all lit up! Thanks to @PoblockiSignCo! pic.twitter.com/MIBTxhpFjt — Milwaukee Symphony (@MilwSymphOrch) June 10, 2020