The MKE Film Festival is over, but the Take A Seat campaign is very much not

The 2018 Milwaukee Film Festival is officially over. But while the end credits may have run on the film festival, your ability to support Milwaukee, support the Oriental Theatre and maintain a true icon of the city has just begun.

The 2018 Milwaukee Film Festival is officially over, complete with Milwaukee Film today announcing its official attendance tally (more than 78,000, a 6 percent drop from last year – probably due to beginning in the midst of the Brewers' impressive playoff run and wrapping up around Halloween. But hey! membership has exceeded 5,000!) and its 2018 Allen H. (Bud) and Suzanne L. Selig Audience Award winner, the delightful doc "Science Fair."

"2018 has proven to be a year of unprecedented growth and evolution for Milwaukee Film, on many levels," said Milwaukee Film CEO and artistic director Jonathan Jackson, in a press release. "Our 10th anniversary film festival proved to be an incredible celebration of the strength of film culture and appreciation in our region, the advancement of our efforts to restore and revive the iconic Oriental Theatre, and the humbling and generous outpouring of financial support for our organizational mission and vision from across the entire community, setting Milwaukee Film on a sustainable path for growth"

But while the end credits may have run on the film festival, your ability to support Milwaukee, support the Oriental Theatre and maintain a true icon of the city has just begun with the Take a Seat fundraising campaign. 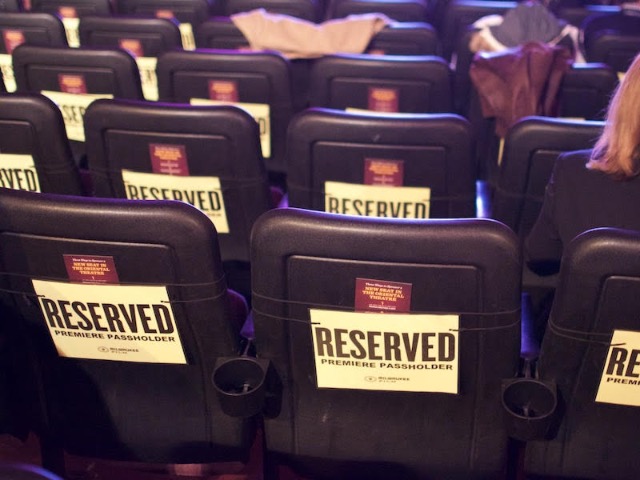 As you likely heard if you attended a festival movies (and you SHOULD'VE!), the Take a Seat campaign gives you a chance to put your name on an almost century-old part of Milwaukee history. For donation amounts of $2,500 for the main auditorium or $1,000 in the two side theaters or the balcony (with various payment plans available), you can sponsor at seat at the Oriental Theatre, with your name on the chair to prove your love of movies and Milwaukee.

There are two main ways you can go about taking your seat at the Oriental: donating online at Milwaukee Film's website or using the digital kiosk in the lobby.

You can also help Milwaukee Film and the Oriental Theatre out the old fashioned way: by joining its more than 5,000 members or, if you've already done that, upgrading your membership. All of that is also available on the organization's website – and if Milwaukee raises $1.5 million, Bud and Sue Selig will match that amount.

Right now, Milwaukee Film reports its raised more than $7,575,000 toward its $10 million capital campaign – a good dent, but surely more to be done gets its Hollywood ending.

So donate, become a member, slap your name on a seat and, most important of all, see a movie at the Oriental Theatre. Because even though the festival is over, the show goes on at the Oriental – even featuring several films you may have missed at the fest, including "Free Solo," "On Her Shoulders," "The Guilty," "Science Fair," "Madeline's Madeline," "Hale County This Morning, This Evening" and more. Spoiler alert: They're all really, really good.

Support Milwaukee the best way I know how: by going to the movies.

Milwaukee Film announces the dates for the 2020 festival