Get a (delicious) taste of Malaysia at Asian Papayoyo

There are a few cuisines of which you'll find little representation in the Milwaukee area. Malaysian is one. But you can get a taste of the cuisine at Asian Papayoyo, a relatively new restaurant on the Marquette campus.

There are a few cuisines of which you’ll find little representation in the Milwaukee area. Malaysian is one. In fact, I can think of three restaurants where you can glimpse the Malay canon. Among them are Mr. Wok, the pan-Asian restaurant in Pewaukee; Peking Chef in Fox Point (Malay dishes are smattered between Indonesian offerings); and Asian Papayoyo, a  newer restaurant (just over a year old) located on the West side of the Marquette University campus. 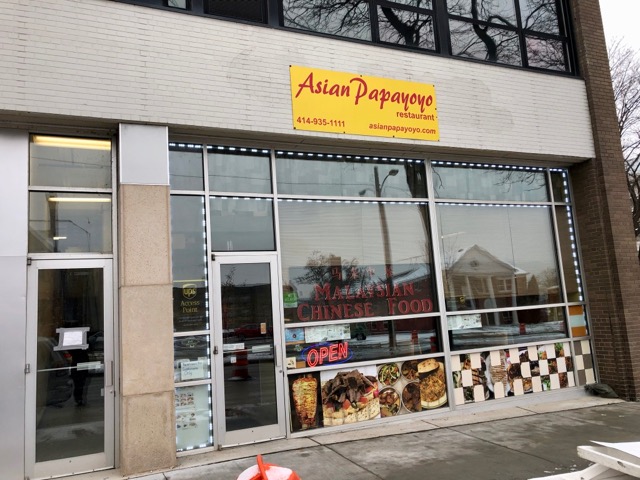 If you've not experienced Malaysian cuisine before, it's helpful to envision it as a beautiful mash-up of flavor profiles also found in Chinese, Indian and Thai cuisines. Key ingredients include sambal, a chili-based condiment that also incorporates lime and Malay shrimp paste (belacan). It’s spicy, sweet, tart, salty and slightly (but pleasantly) fishy. There are also flavorings like makrut lime leaf, lemongrass, pandan leaf, soybean paste and roots like turmeric, galangal and ginger.

In fact, Malaysian dishes are fascinating, in part, due to the way so many cultures have contributed to an overall whole.

An article of this brevity could never do justice to the country's rich cultural history. However, it's fair to say that Malaysia’s geographical location -- between China and India – has significantly shaped both its cuisine and cultural makeup.  The same could be said of its location along major aquatic trade routes, which influenced the cuisine in countless ways.  The resulting culinary tradition is both fascinating and distinct. Take for instance the example of nyonya cuisine, a distinctive culinary tradition introduced by Chinese migrants who married into Malay culture; it's the birthplace of signature Malay dishes like laksa lemak, a curry-based soup that's known by a shortened moniker, laksa, in Singapore and often called curry laksa in Malaysia.

Nyonya is a bit of what you’ll get at Asian Papayoyo, a restaurant owned by Victor See, a Malaysian native whose family moved from China to Malaysia generations ago. See's background is reflected on the menu on which you’ll find -- not only a good number of Malay dishes -- but also a smattering of Chinese dishes – including steamed pork dumplings (pictured), fried rice, lo mein, and snacks like crab (or green bean) rangoon and a selection of buns (custard, lotus, red bean, chicken and roasted pork). 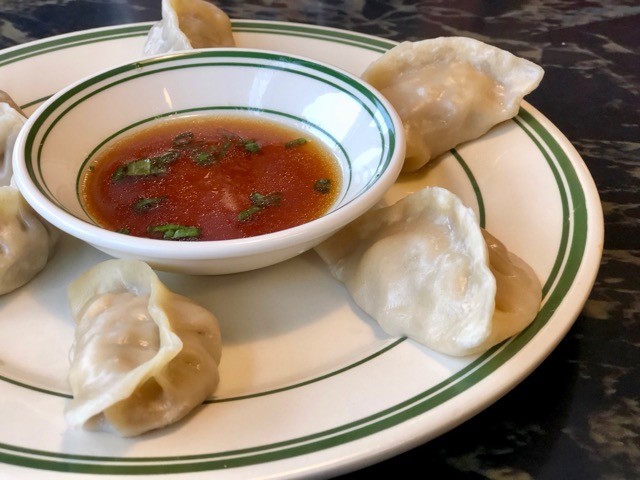 Among the must-try dishes are roti canai, a unique flatbread that beautifully illustrates the fusion of Indian and Malay cuisines. It’s tender and chewy in its center and flaky on its exterior, with a buttery flavor and a texture not unlike a croissant. Dip it into the accompanying curry sauce, which is rich and complex, and you’ll understand precisely why you came to Asian Papayoyo. 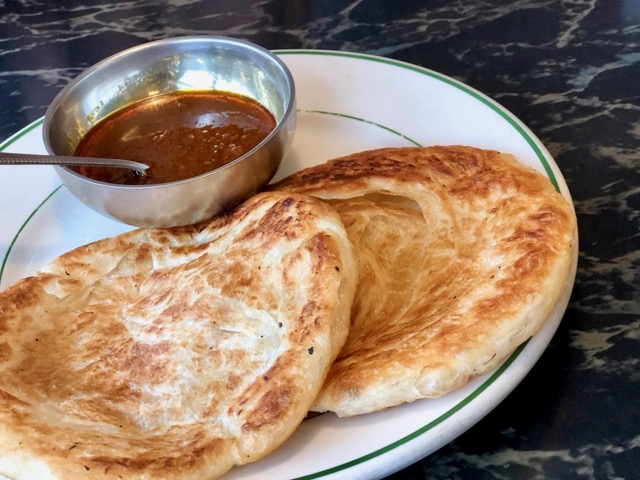 The rendang curry beef was a favorite among those I tried. The beef was ultra tender and the sweet and moderately spicy sauce (ordered medium in terms of heat) was redolent with spices, many of which I’d be hard-pressed to identify or name, as they’d been married seamlessly into the long-simmering curry. The dish was delicious. And it came with a fan of cucumbers, useful vegetables for taming the heat in between bites. The accompanying spicy chili prawns were equally flavorful, cooked with onions in a sweet sambal sauce. The flavor of chilies was prevalent but the heat quite subtle. 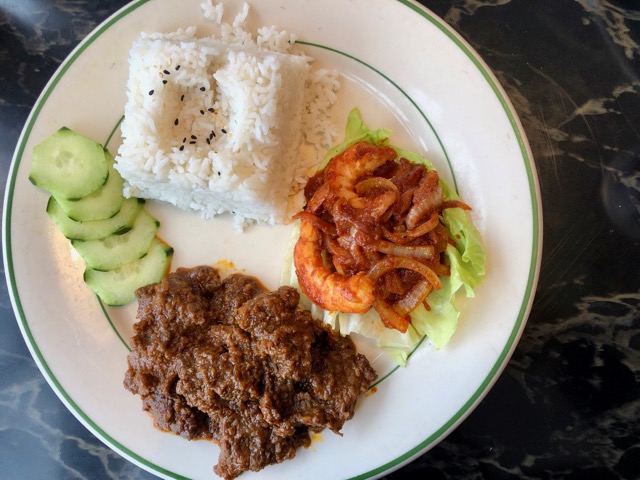 I didn’t find quite the same flavor explosion in the seafood laksa, which was creamy and quite mild. The beautiful red broth contained plentiful noodles and broth along with crisp bean sprouts, sweet fish cakes, a few chunks of krab (crab with a k), two or three ringlets of chewy squid, shrimp and cubes of fried tofu. I expected a whorl of flavors: a bit of funk from the shrimp paste, maybe a more pronounced curry flavor and a stronger presence of spice. But it was delicate in flavor, especially when compared to more full-flavored options like the rendang. 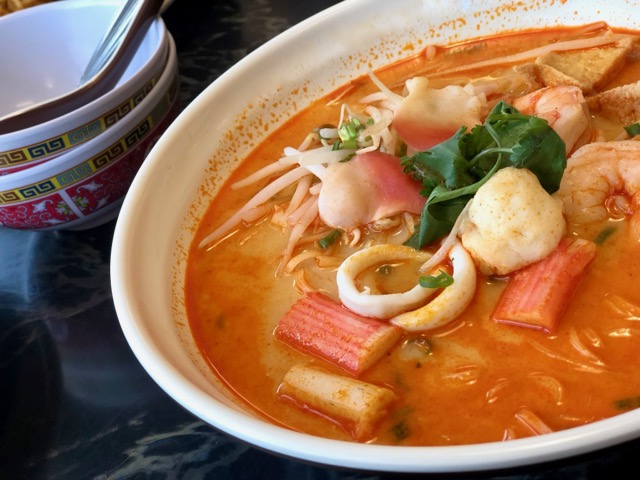 For those who enjoy peanut sauce, the mee rojak (loosely translated as mixed noodles) at Asian Papayoyo is a good bet. The noodles came doppled with slivers of cucumber, cabbage and carrots along with a fair amount of fried tofu (chicken is also an option). All was bathed in a sweet and slightly spicy peanut sauce that was thick enough to thoroughly coat each and every element. 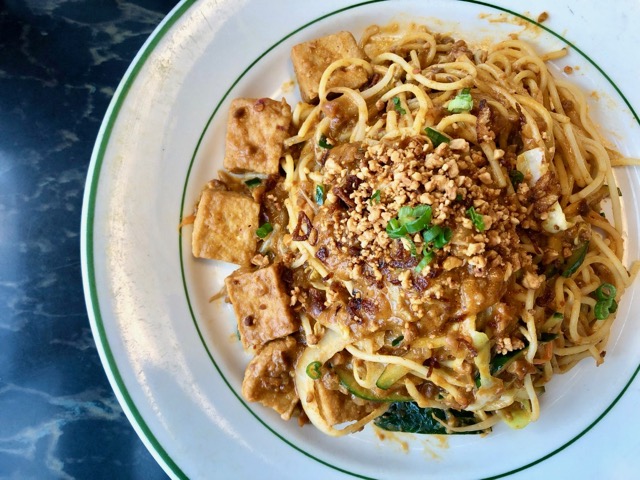 For those interested in trying another classic Malaysian dish, it's helpful to note that nasi lemak, Malaysia’s national dish, is available. You won't find it listed on the menu, but you can ask for it... and you should. The showpiece of the dish is simple: tender rice delicately flavored with coconut milk and beautifully nuanced citrus and floral notes. Accompaniments included nicely crisp pieces of flavorful fried chicken, more of those sweet spicy prawns and a perfectly hard-boiled egg. 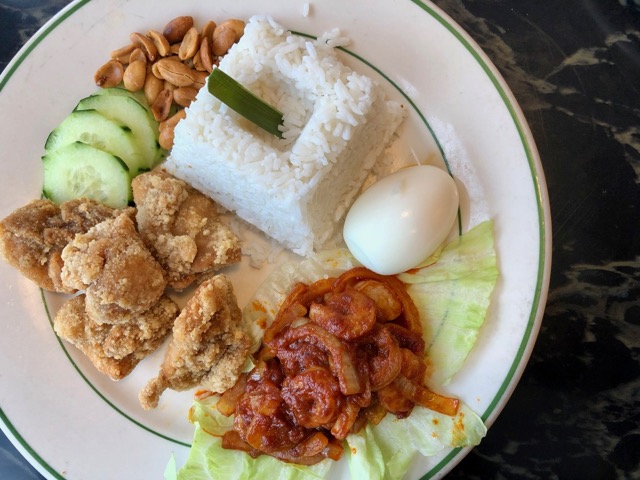 Another off-menu selection includes chicken rice, a dish adapted from Hainan, China comprised of chicken and rice cooked in chicken stock. It’s on my list to try next time, along with the Malay spiced lamb shank, which I can only imagine (based on my experience thus far) will be tender and delicious.

In fact, it's dishes like these that I’d love to see more of on the Asian Papayoyo menu. And – if I judged my conversation with the owners rightly – it sounds as if there could be, if customers request them, embrace them and order them regularly.

That sounds like an excellent charge for all of us who love a steady diet of varied global cuisine.