In this series, we're trying out some of the city's most popular fish fries. You'll find commentary, pro tips and ratings of the three staples of a classic Wisconsin fry: namely the fish, the potato pancakes and the classic Wisconsin-style brandy old fashioned.

In this series, we're trying out some of the city's most popular fish fries. You'll find commentary, pro tips and ratings of the three staples of a classic Wisconsin fry: namely the fish, the potato pancakes and the classic Wisconsin-style brandy old fashioned. View all fish fry reviews here.

It’s been a while since I’ve driven to Freistadt, a small German community which is located along the western edge of what is now Mequon.

The little burg, the name of which means "free city" was founded in 1839 by 20 families who fled religious persecution in their homeland of Pomerania, Germany. Today, the area is home to Trinity Freistadt, the first Lutheran church established in Wisconsin, as well as a number of traditional German cultural organizations including the The Freistadt Alte Kameraden Band and the Pommersche Tanzdeel Freistadt.

It’s also home to Landmark Inn, the home of a beloved Friday night fish fry which has gleaned a notable reputation strictly by word of mouth (the restaurant has no web site nor an official Facebook page). In turn, guests should expect a wait of some sort on a Friday evening, despite the time of arrival. The crowds grow thicker during the Lenten season. 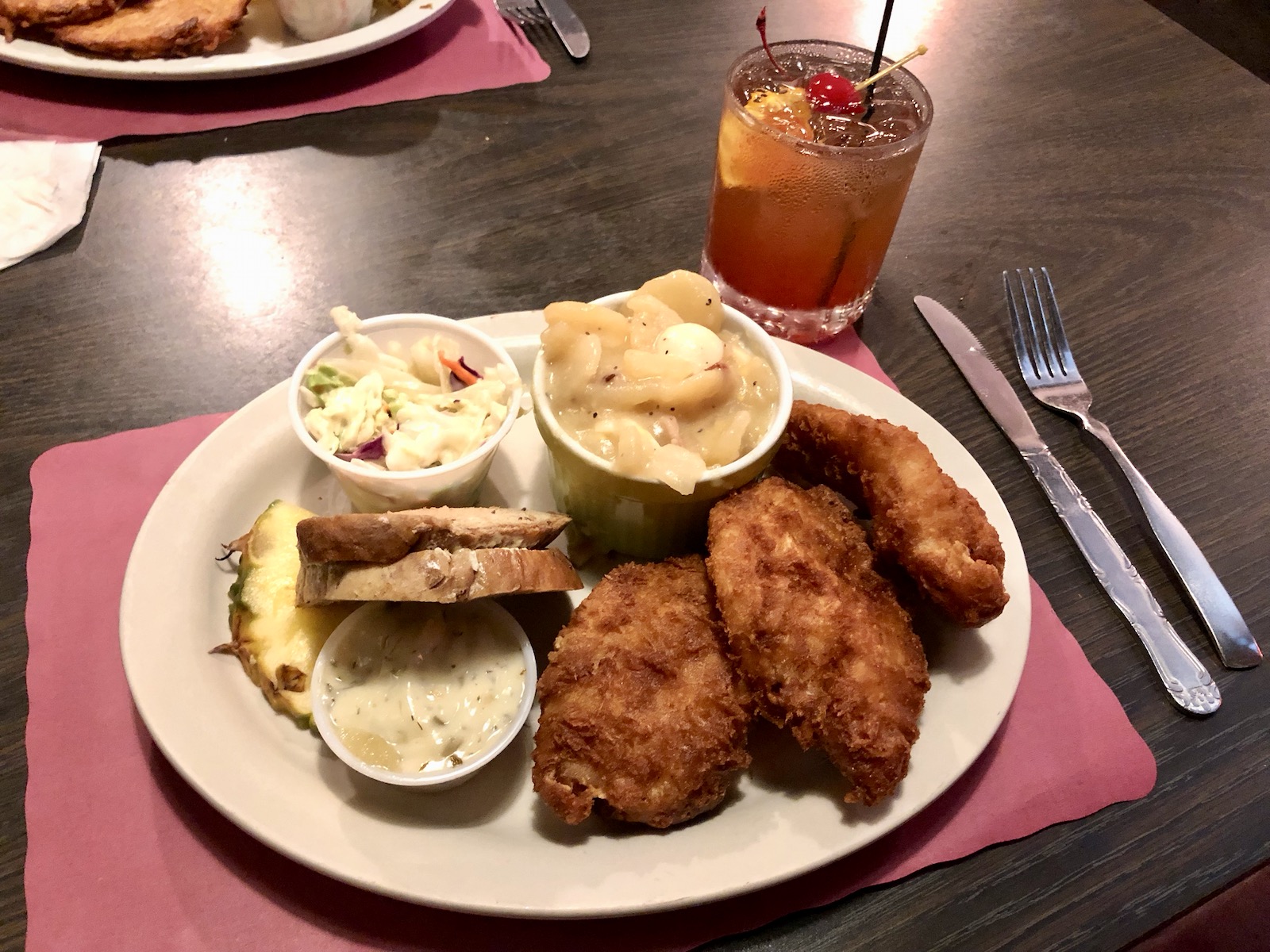 The building which houses Landmark Inn isn't quite as old as Freistadt. But it was built in 1891. As the story goes, it once housed the post office and likely a general store. These days it’s a bustling restaurant with a rustic Northwoodsy/Supper Club-esque vibe that has been manned by the Block family for the past three decades.

Pro tip: If you love New England clam chowder, Landmark’s is worth your while. It’s on the thicker side, but not floury, with a nice clam presence. You might also want to save room for dessert, which includes any number of housemade cakes, pies and tortes for right around $5.50 each.

Although intrigued by the beer-battered perch (which I’m certain I’ll try on my next go-round), I opted for the breaded, which is pictured below. The plate included four nicely sized lake perch coated with a crisp batter that wasn’t thick enough to obscure the flavor of the fish but which definitely went beyond a dusting of seasoned flour. It was lightly seasoned (definitely not too salty) and the fish itself possessed a fresh flavor and lovely texture. 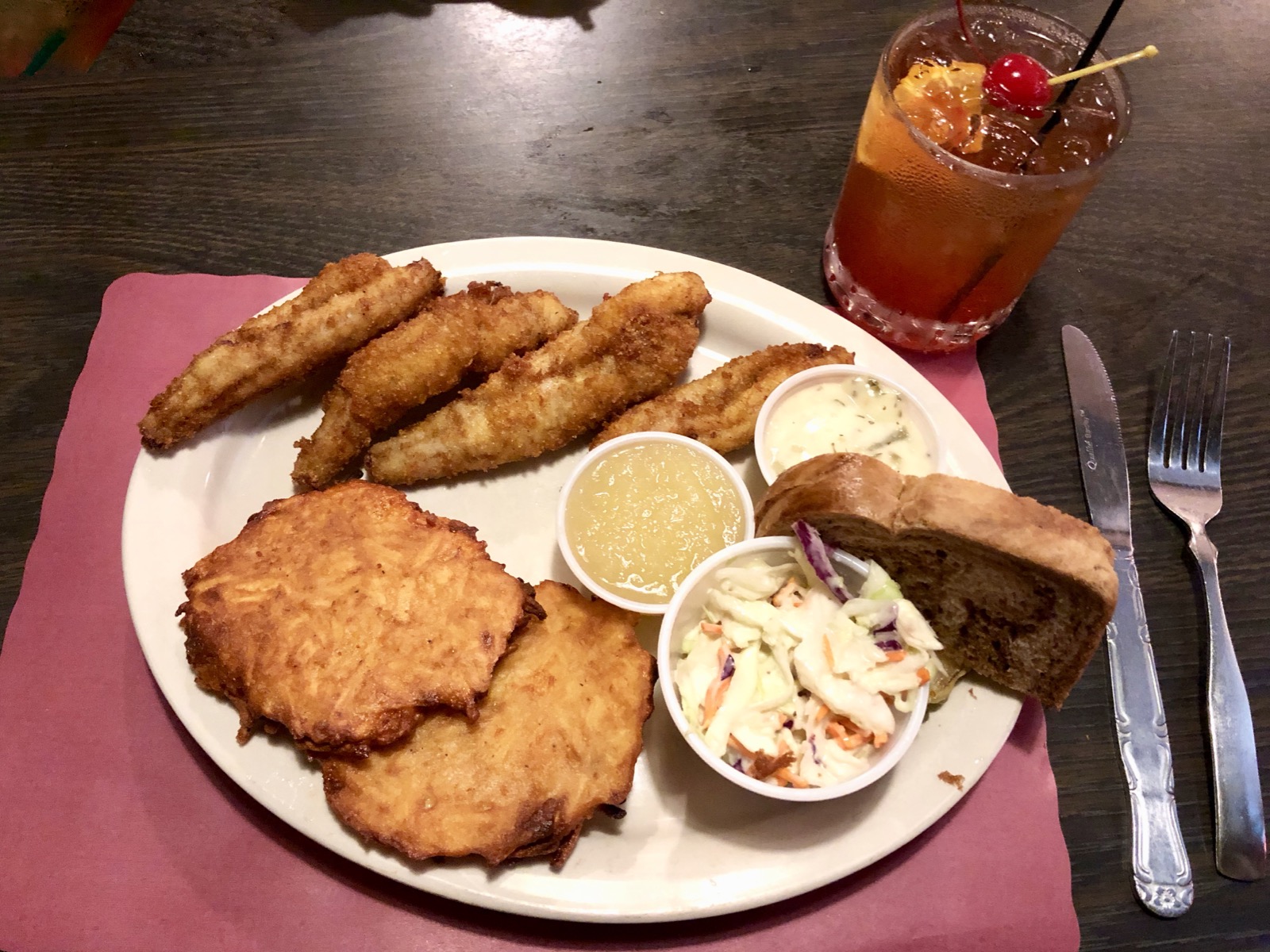 Meanwhile, a hefty portion of beer battered haddock sported a delightfully light, crisp breading and moist flakey fish with a nice clean flavor and absolutely no sign of dryness. Again it was lightly seasoned, which allowed the flavor of the fish to shine.

The potato pancakes had a great texture; the potatoes were soft and the exterior crisp. They were thicker (probably about ¼ inch or so); but they still maintained a moderate level of lightness. To top it off, they weren’t at all greasy.

That said, the German potato salad was equally as delicious. It was warm and perfectly tangy with a hint of black pepper, bits of bacon and boiled egg. The texture of the potatoes was also fantastic with none of the mushiness that destroys an otherwise tasty potato salad.

Meanwhile, the old fashioned was solid. It was moderately sweet with a fair brandy presence and distinct notes of clove and baking spices. It was well balanced with the appropriate bitter notes. Visually, there was no sign of muddled fruit, but the drink was somewhat cloudy and garnished with both cherry and orange.