You might have to consult your GPS before heading out to the Lone Star Tavern, which is tucked back on a lazily winding rural road just east of Highway 41/45. It's not the sort of place you'll just pass on your way to somewhere else; and that may, indeed, be part of its charm.


You might have to consult your GPS before heading out to the Lone Star Tavern, which is tucked back on a lazily winding rural road just east of Highway 41/45. It’s not the sort of place you’ll just pass on your way to somewhere else; and that may, indeed, be part of its charm.

Also charming is the amount of storied history behind Lone Star’s building, which dates back to the mid-1800s when the area was founded as a small settlement known as Goldenthal (over the years, Goldenthal became Goldendale and in the 1960s it was incorporated into what is now Germantown). As the story goes, the building in which the Lone Star Tavern now operates was once a six-room half-way house for travelers making their way from West Bend to Milwaukee.

For a time, the building operated as the George Schuster Buffet, but in 1946, the ownership transitioned to Edward and Florence Wing, who were responsible for naming it the Lone Star Tavern.

As for atmosphere, Lone Star showcases a load of quintessential small town charm. The bartenders are friendly and welcoming (if you look indecisive, they’ll probably suggest you order a Wisconsin old fashioned). The atmosphere is also very much the epitome of a Wisconsin tavern, complete with beer paraphernalia – including a notable branded bar light advertising "Lone Star: Pure. Texan. Beer."

When you arrive, you’ll want to walk to the far end of the bar where there’s a spiral notebook. Sign in with your name and the number of diners in your party, and then grab a drink. It’s a popular spot, particularly among locals, and (almost inevitably) there will be a wait. We arrived at about 6:30 p.m. and were seated around 7:40.

From there, Lone Star operates a bit like a supper club. When it’s your turn to dine, a server will find you in the bar (no clue how they manage it, but they really do) and take your order before you’re seated in the small adjoining dining room (you can find the menu written on a chalkboard behind the bar). It’s a practice that saves time for everyone, and you can expect that once you’re seated, your food won’t be long in coming. 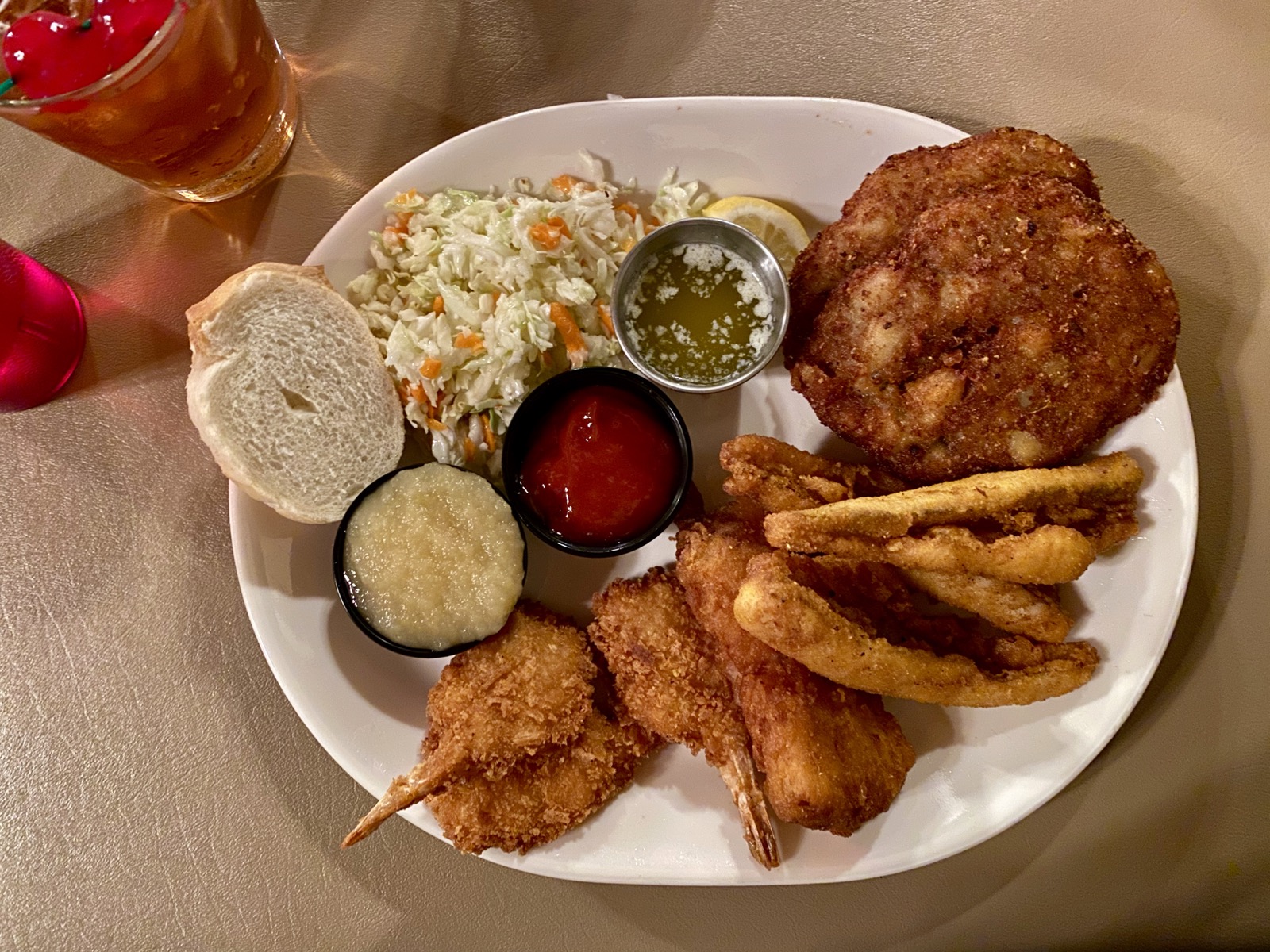 The evening we visited, the restaurant didn’t have lake perch (potentially due to the Great Lakes lake perch shortage that’s currently impacting restaurants across Wisconsin); but they did have "baby pike" for $13.75. 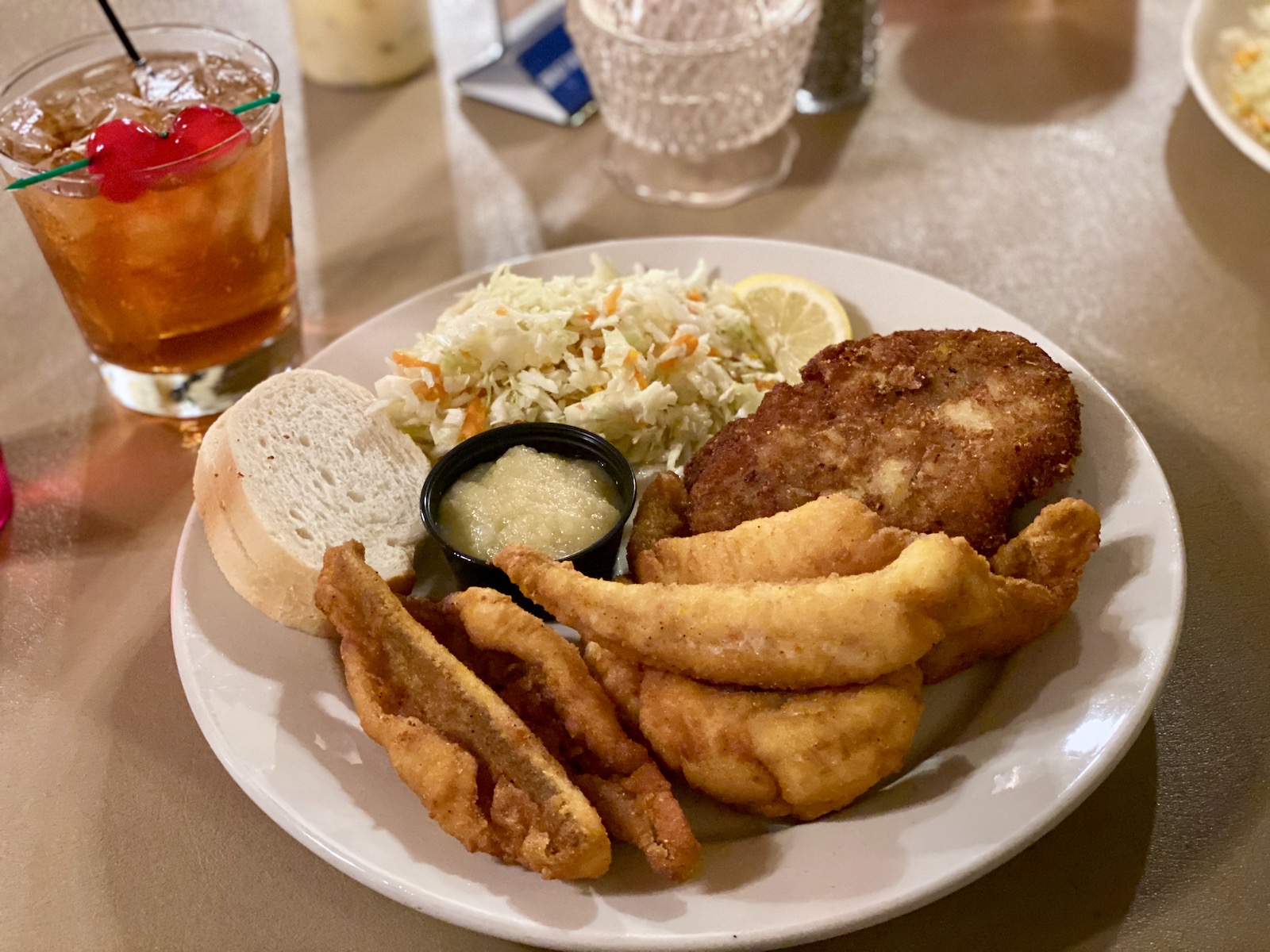 The portion of baby pike was generous, featuring six pieces of fat, tender pike with a light, flavorful breading. The fish itself was nicely textured and (in my opinion) a worthy substitution for the perch.

My dining companion ordered the Fritz Special, so we were also able to try the shrimp and cod. The battered cod didn’t fare quite as well as the pike; the batter was light and flavorful, but the fish beneath was slightly dry, with a vaguely stringy texture. The shrimp was crisp and sweet, but typical of the frozen breaded butterflied shrimp you find at a variety of non-seafood venues.

The potato pancakes were like no others I’ve experienced. They were actually breaded, so the exterior was browned and crunchy, and the interior fluffy and potato forward with what I discerned as a mix of shredded and chopped pieces of potato. The main chink in the pancakes' armor is that they erred a bit on the greasy side.

In retrospect, I wish we’d tried the German potato salad as well. But that will need to be saved for another trip.

The brandy old fashioned was as solid as can be (and a steal at $4.25). There was no notable muddling in the glass, but the cocktail came through with a balance of citrus, cherry and warming spice notes. It was slightly sweet, but nicely balanced with a notable brandy presence. As for garnishes, they’re your choice. But I went classic, opting for a simple cherry garnish.