In this series, we’re on the hunt for some of the area's best fish fries. You’ll find commentary, pro tips and ratings of the three staples of a classic Wisconsin fry: namely the fish, the potato pancakes and the classic Wisconsin style brandy old fashioned. View all fish fry reviews here.

I enjoy North Avenue Grill a great deal.I like the bustle of the dining room during the breakfast rush, the smell of toast and coffee wafting through the air. And at lunch, it’s among the best West Side spots to go for a big, hearty burger. I often imagine that this was what diners of yore used to be … comfortable, low key spots with a family friendly vibe and great scratch-made fare.

Interestingly, it wasn’t a place I’d have thought to visit for a fish fry, until a local reader emailed me to tell me she thought a trip would be well worth my while. As it turns out, she was right. 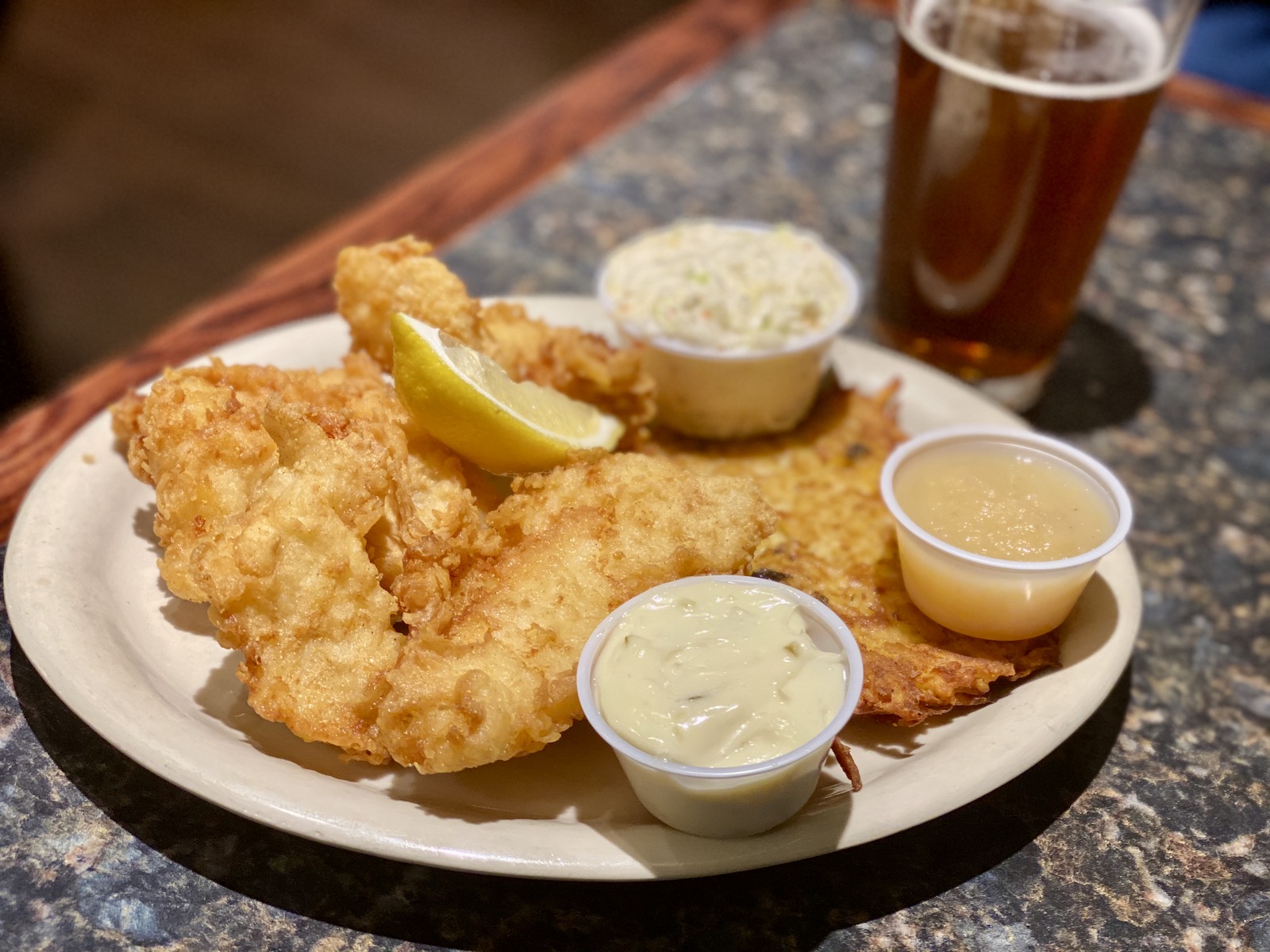 *According to owner Mike Topolovich, the restaurant is currently serving zander (also known as European pike perch) in place of lake perch, which are currently in short supply due to low populations in the Great Lakes.

Note: If you like New England-style clam chowder, North Avenue Grill’s is worth your time. It’s creamy and rich, but not ghastly and thick like so many Midwestern versions. The creamy base is flavored with onion, celery, bay and thyme; and it’s stocked with an ample portion of chopped clams and large pieces of chopped potato.

The cod, which is served three pieces to a plate, was exceptional. The batter was light and crisp with a consistency not unlike a well-fried funnel cake; it possessed a classic beer batter flavor, but was quite a bit less salty than most. In the end, it allowed the tender cod’s mild flavor and tender texture to shine. 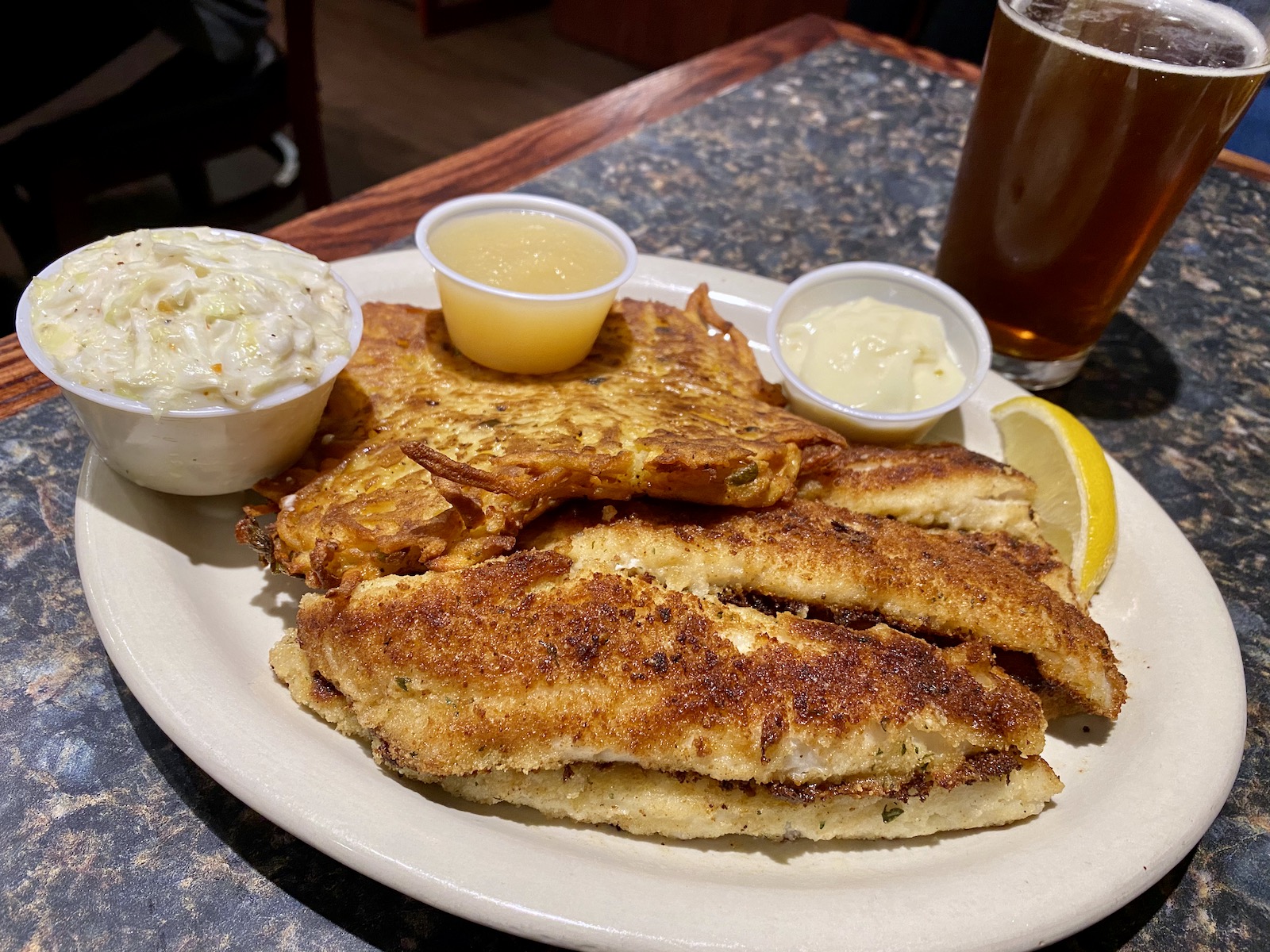 Meanwhile, the zander (pictured above), which stood in for the lake perch, featured lengthy, moderately thick fillets that were breaded in a fairly light breadcrumb-style coating. The breading itself was mild and not overly seasoned; it came to the table crisp and hot and was best eaten before the initial crispness began to fade. Meanwhile the flavor of the zander was extremely mild (it’s far less sweet and flavorful than lake perch) with a delicate texture. If you prefer a very mild fish, this might be a good option for you. I’d likely opt for the fuller flavor of bluegill or walleye.

The potato pancake was just as well executed as the fish. It was large, measuring at least five or six inches across and comprised primarily of shredded potato, with just enough batter to bind everything together. It didn’t possess a notable onion presence (which I do enjoy); but it was well-seasoned and crisp on the exterior with plenty of craggy edges. This was a pancake I’d definitely enjoy eating again.

You won’t find an old fashioned on the menu at North Avenue Grill, let alone the work intensive hand-muddled sort that truly sets itself apart. But, the rest of the fish fry was good enough to warrant a return visit, old fashioned or not.

if you’d like to round out your meal with an alcoholic beverage, there are a number of choices including a small selection of beer and wine.