This week in Friday fish fry news, Lori Fredrich travels to the Old Hickory Golf Club, a venue which boasts "the best food in the area" to check out their breaded perch and beer battered cod.

An OnMilwaukee reader once commented to me that he’s found the best quality fish fries well outside of the Milwaukee-metro area. I responded with a few great fish fries I’d found inside the city limits; but his remark stuck with me on some level, and I think of it when I’m contemplating venues outside of the area.

Such was the case when the opportunity arose to dine with my in-laws for my husband’s grandfather’s 95th birthday in Beaver Dam. They’d planned a celebratory dinner at a venue that hadn’t been on my radar: the Old Hickory Golf Club, a venue boasting a golf course that’s been around since 1920. When I read that the Club’s dining room boasts "the best food in the area," it seemed a worthwhile spot for a destination fish fry. Sadly, the venue did not live up to expectations.

I was somewhat surprised to find the dining room to be quite modern with a backlit bar and plenty of room for groups of all sizes. Its decor, overall, was simple and banquet-room-like; but it did boast a nice view of the adjoining patio and golf course. 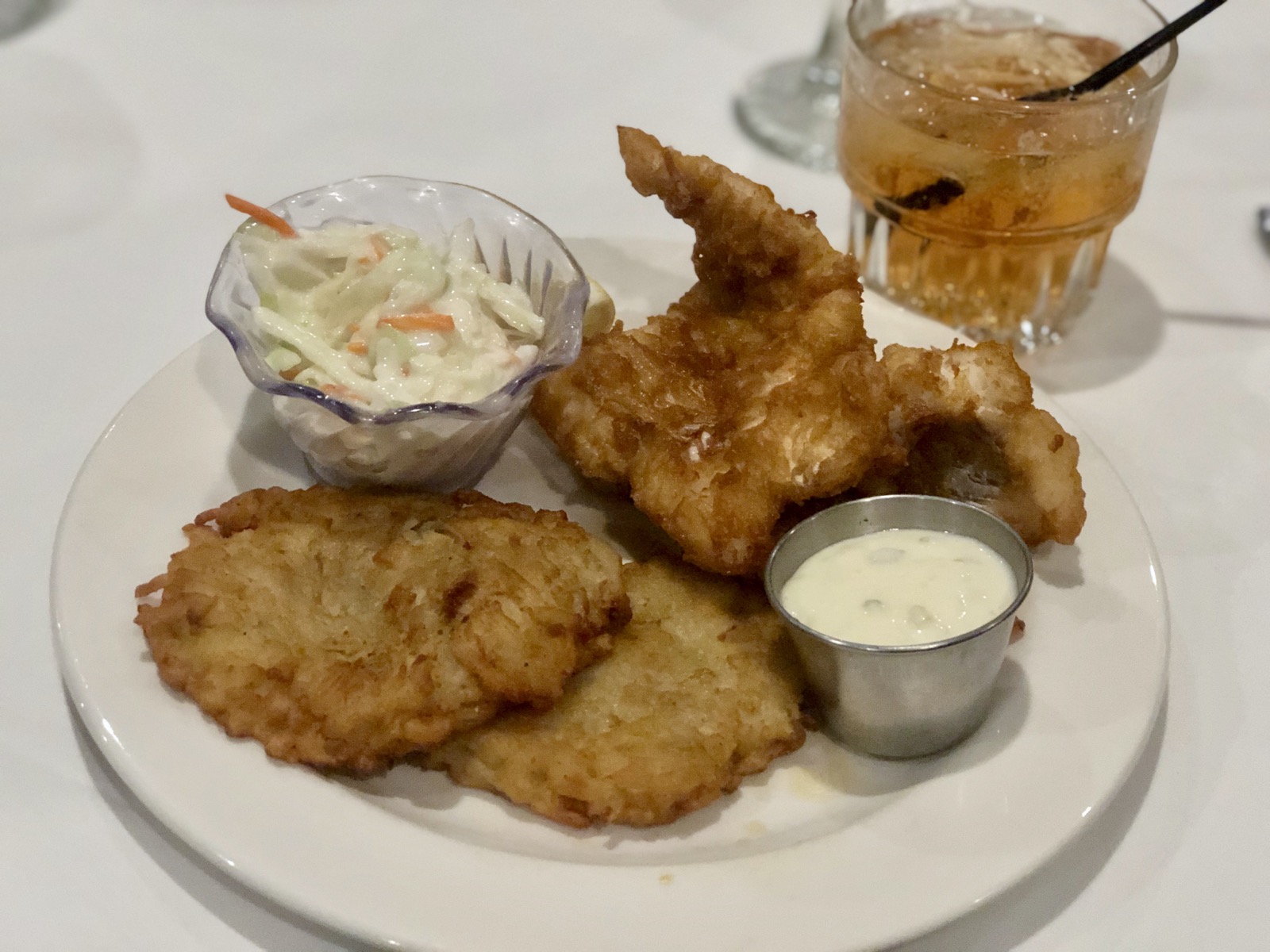 The dining room at Old Hickory Golf Club is open to the public on Tuesday, Thursday and Friday evenings throughout the year. On Friday nights, guests can choose from a range of dishes, including the Club’s Friday night fish fry. Options include beer battered cod ($12.95), broiled cod ($14.95), almond crusted walleye ($19.95), crispy breaded perch ($15.95) or golden coconut breaded shrimp ($14.95).

Selections are accompanied by fresh baked rolls, a cup of soup or side garden salad, creamy coleslaw and a choice of potato pancakes, French fries, baked potato, house chips or vegetables of the day. 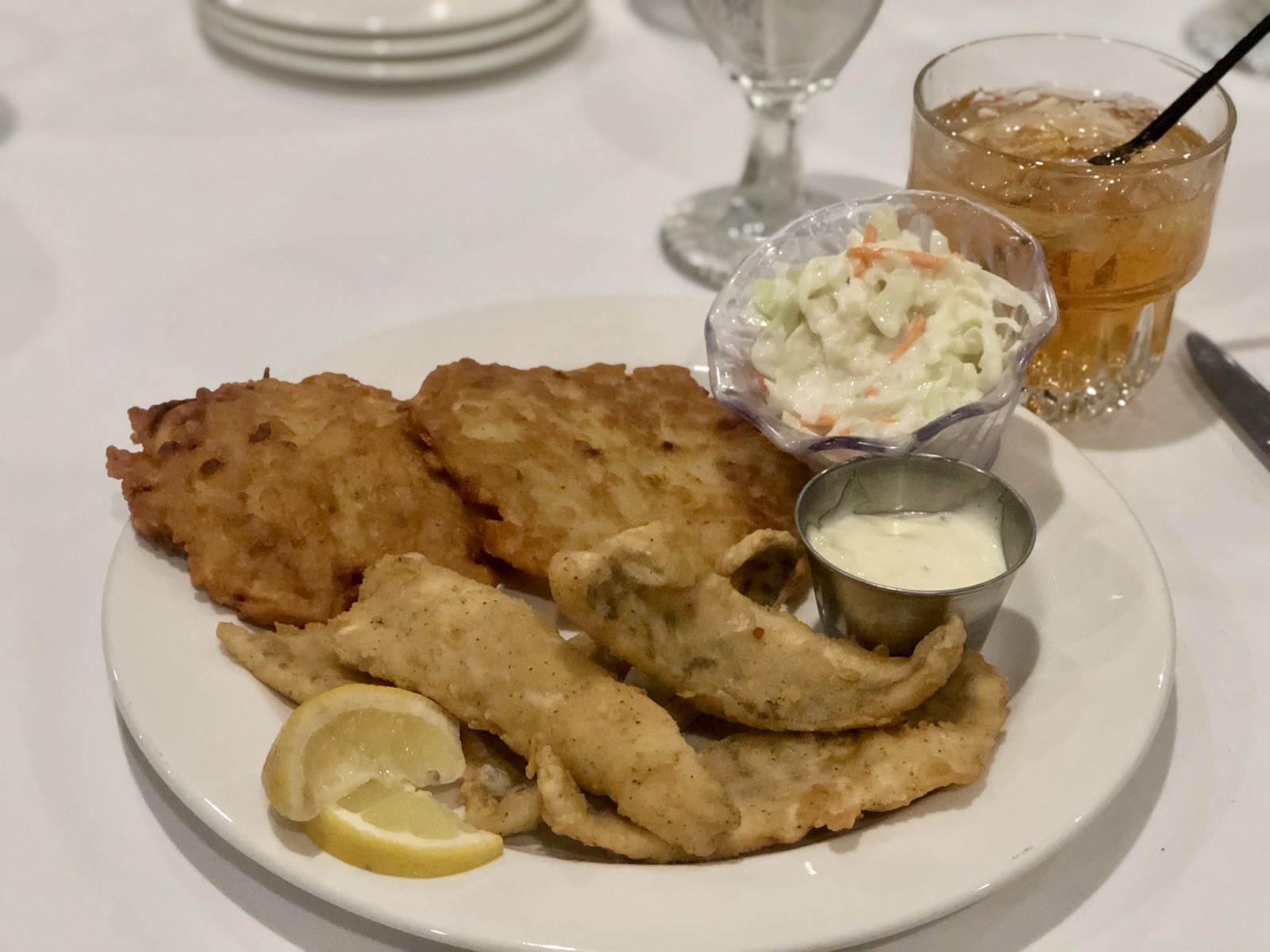 The perch plate featured five average sized lake perch lightly coated in seasoned flour. The coating erred on the salty side, but was reasonably crisp. Unfortunately, the fish was slightly chewy in texture. The accompanying lemon on my plate (a small, yet indicative detail) had seen better days, prompting me to set it aside completely.

Meanwhile, the cod plate boasted a generous portion of cod in the former of one large and two smaller pieces (pictured above). The fish itself was relatively tender and flaky and coated with a light, crisp beer batter. Both its flavor and texture was strangely reminiscent of the fish I recall eating at the popular Arthur Treachers chain as a young person.

Although visibly housemade, the pancakes were salty and somewhat greasy with an unpleasantly dense and slightly rubbery texture. They made me wish I’d opted for the baked potato instead.

The brandy old fashioned was basic as they come. Slightly orange in color, it wasn’t overly sweet or brandy forward and possessed the faintest hint of bitterness. In fact, it erred on the weak side. One of my dining companions ordered the press, which was constructed in a similar manner; sadly, its flavor was simply more dilute and even less complex. Neither drink boasted muddled fruit, nor a garnish.

The fish fry at Old Hickory is available on Fridays from 4:30 to 9 p.m.