In this series, we’re on the hunt for some of the area's best fish fries. You’ll find commentary, pro tips and ratings of the three staples of a classic Wisconsin fry: namely the fish, the potato pancakes and the classic Wisconsin style brandy old fashioned. View all fish fry reviews here.


Milwaukee has its fair share of hidden gems; among them is State Fair Inn, the oldest continuously operating family-run bar in West Allis. The bar and restaurant has a history which dates back to the turn of the century, when it was built on land owned by Schlitz Brewing Company (and you can read more about that here).

But the longtime West Side staple has also been rumored to have a gem of a fish fry, based on a recipe for beer batter that’s been passed through the generations. Of course, that piqued my interest. So I made what felt very much like a pilgrimage to try it out.

We arrived around 6 p.m. to a crowded house. The dining room was full and there were exactly two seats left at the horseshoe bar, which we gladly claimed. The kitchen at State Fair Inn is tiny, so we expected the 40-minute wait that ensued. Fortunately, it was easy to pass the time enjoying a cocktail and chatting with a number of regulars. The latter was part of the reason we decided to enjoy our meal at the bar.

Note: It's worthwhile to note that the garden salads were fresh and nicely dressed. The soups (choice of tomato cabbage or split pea) were both delicious, as well. 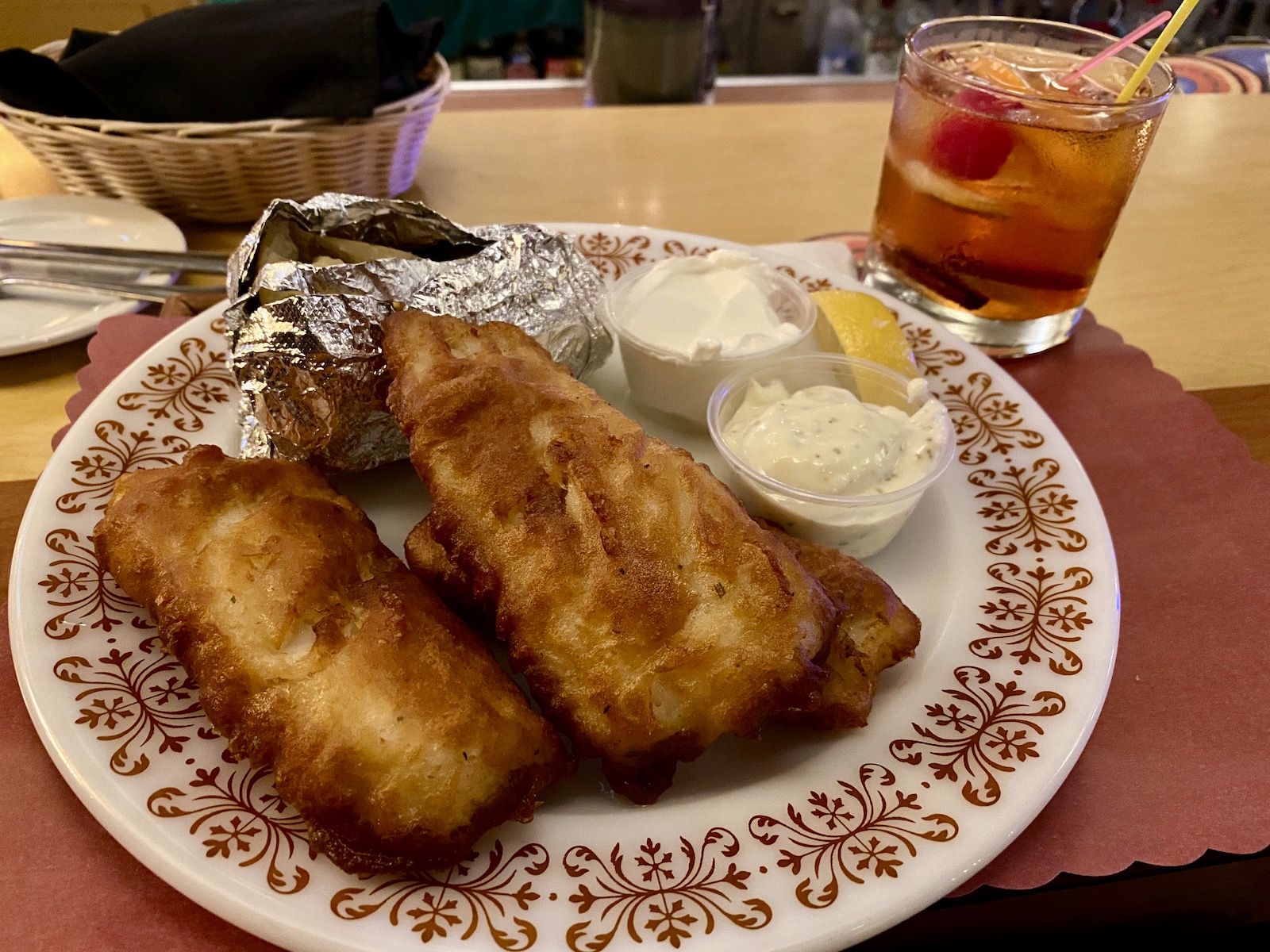 If you’re not in the mood for fish, State Fair Inn also offers Friday night specials like their sought-after double "cowboy style" pork chop which is seasoned, grilled and served with soup, salad and potato. We watched a few come out of the kitchen, and they're a sight to behold.

As far as the fish was concerned, the beer battered cod was definitely a winner. The plate came with three larger loins of cod covered with a distinctive thin, crisp breading (of the sort you seldom find in modern restaurants). The breading wasn't overly greasy and it was pleasantly seasoned. The fish itself was tender and flaky with a pleasant, mild flavor.

The pan-fried perch was advertised as lake perch, which could well be the case when the fish is more plentiful. Currently, the Great Lakes are experiencing a perch shortage, so costs are up and many restaurants are substituting more affordable types of perch.

Such was the case here. When my plate was delivered I found two inordinately large fillets, which I’d guess were either Euro-perch or ocean perch, based on both their size and mild flavor. They were ever-so-lightly floured, seasoned and fried and topped with buttered almonds and capers, which offered a nice pop of acid. The fish wasn’t particularly crisp; but it was tasty and the recipe old school. I’d categorize it as a pleasant departure from the usual. 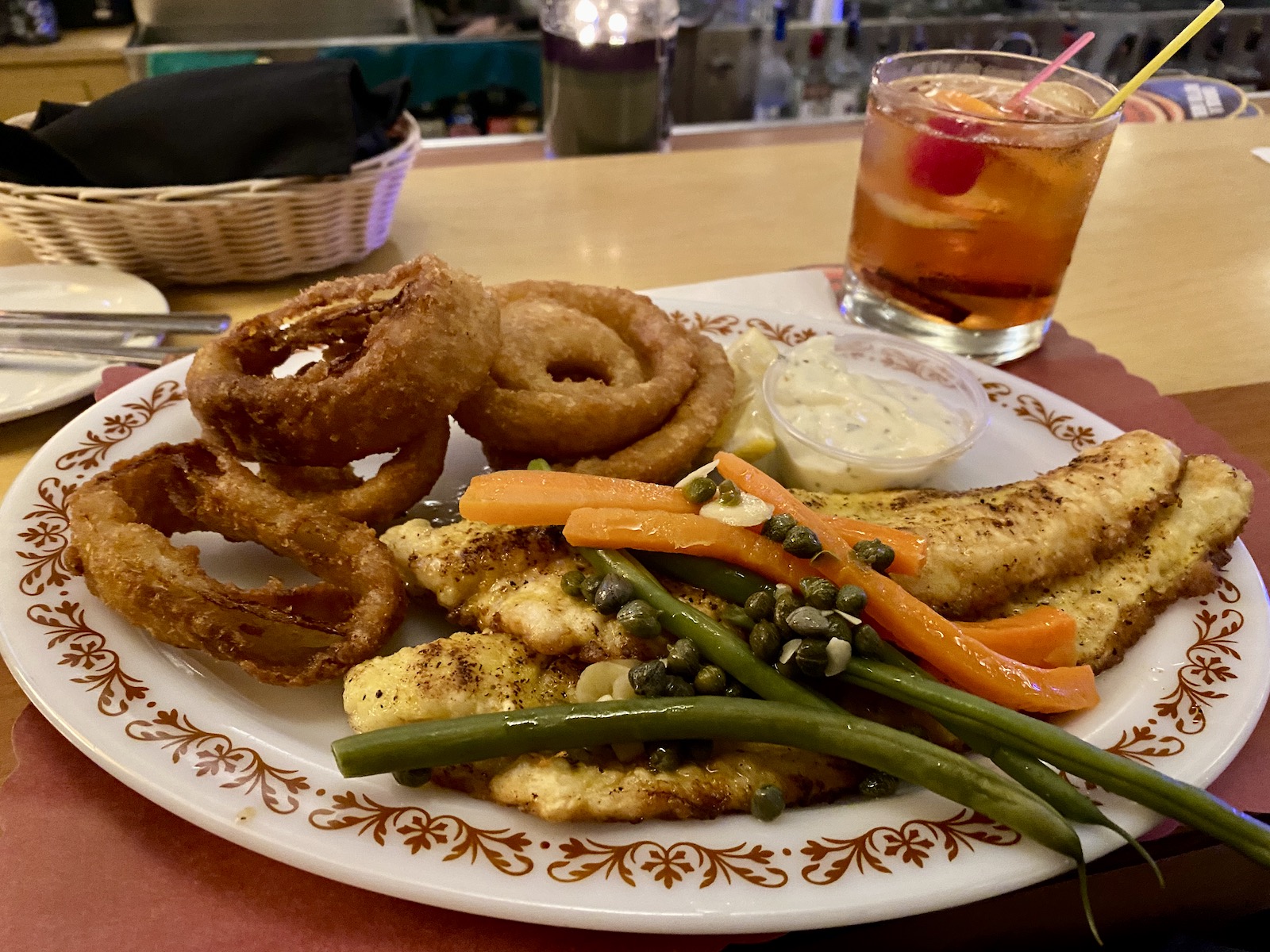 You won’t find potato pancakes here (the size of the kitchen alone makes execution nearly impossible). But you will find a tasty baked potato with crispy skin and a light fluffy flesh that’s perfect dressed with a pat of butter and sour cream.

(Or you could go another route and opt for the big crispy onion rings; if you like the rings at Kopp’s Frozen Custard, these have a similar appeal).

On the cocktail side, the brandy old fashioneds aren’t hand muddled; but they’re made with housemade syrup, so they still exhibit a solid, classic flavor profile. My drink was nicely balanced with a good brandy presence, and it was uniquely garnished with orange, cherry and a cinnamon stick.

State Fair Inn serves fish fry every Friday from 5 to 10 p.m. (or until the food runs out).