Thank Cod It's Fryday: The Stillery

It’s always interesting to note the evolution of an historic property. And such is definitely the case at The Stillery, a bar and restaurant which opened last September. Step into the remodeled property and you’ll find a rustic, yet modern space with a large bar, bustling dining room and enough televisions to make it a decent spot to catch a sports game.

But the modern bar and restaurant, located on what was once an important thoroughfare for early anyone traveling from the Northern portion of the state to Milwaukee, has a long storied history. A tavern since the early 1900s, it served as a popular stop where folks could take a rest before continuing on their journeys.

During those years, it also housed one of Southeastern Wisconsin’s most infamous and lively brothels. It’s rumored that gangsters like Frank Capone paid visits to the bar and that their bullets and the holes they left behind had become part of the building’s charm. names changed over the years, from The Silver Dollar to The Filling Station, and eventually (and most recently) Madam Belle's Silver Dollar Saloon, a name which paid homage to the property’s colorful history.

These days, you won’t find a brothel. But you will find a congenial spot to sip whiskey, grab a sandwich … or perhaps enjoy a fish fry with friends. Fair warning: for all of its newness, The Stillery is a popular spot. You should anticipate a wait, especially on Fridays (crowds were thicker earlier, so you might try arriving after 7 p.m. to avoid them).

The fish fry at The Stillery consists of baked or lightly Hofbrau Original beer battered cod served with cole slaw, tartar sauce, lemon, a salted rye bread stick and the guest’s choice of Stillery fries or potato pancakes ($14.95/$13.95). Other options include a cod sandwich, shrimp dinner or cod tacos. 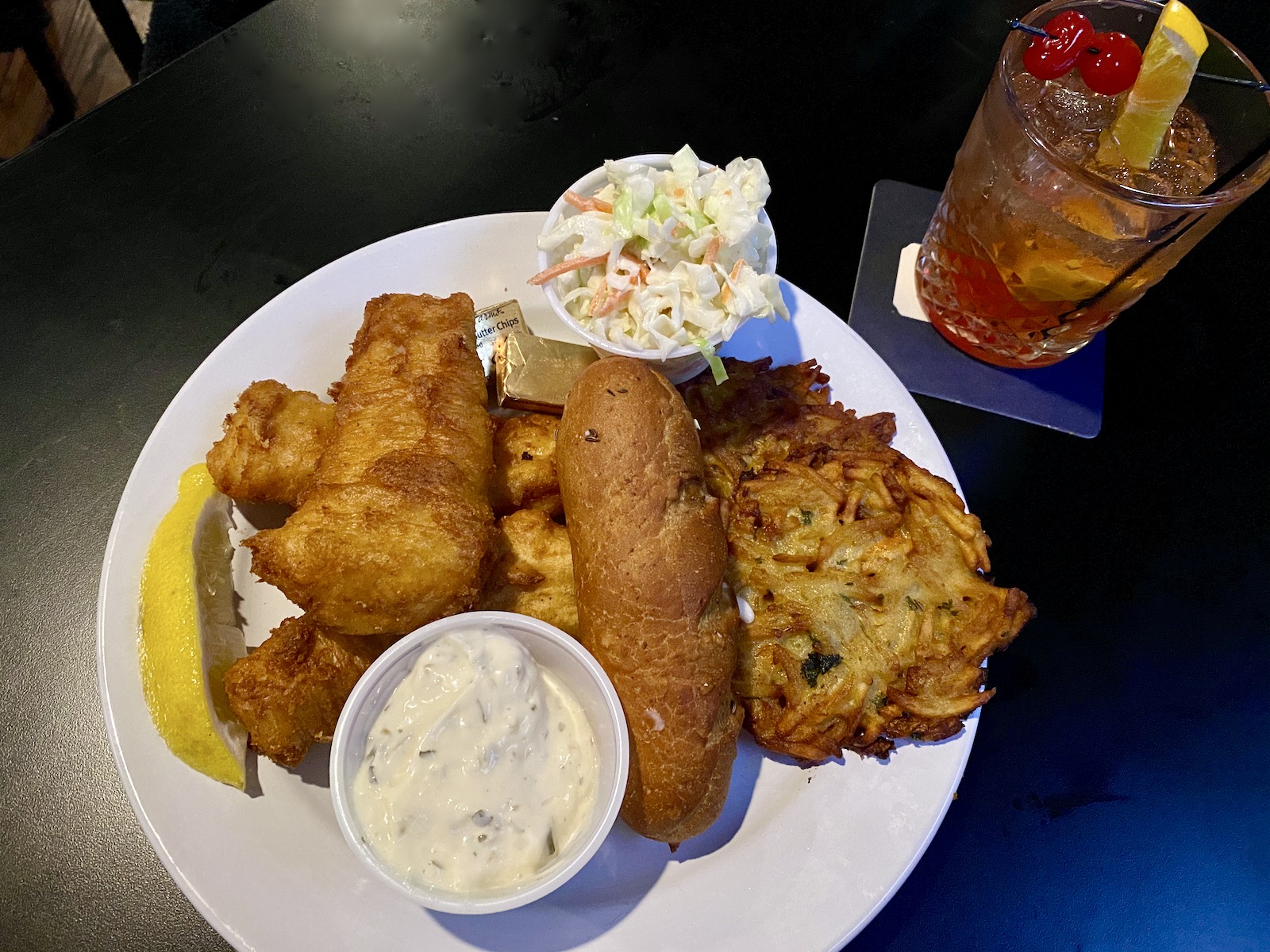 Side notes: I purposely don’t include cole slaw in my fish fry reviews. Most seem to be an afterthought and would fare badly when ranked. But the slaw at The Stillery was fresh, crisp and nicely flavored. Even the tartar sauce -- which was redolant of dill – was tasty, and a nice accompaniment to the fish.

The cod fry was solid. The fish sported a light, classic beer batter that was crisp overall (with just a touch of sogginess where the fish had been stacked). Overall the batter wasn’t greasy, and the fish itself was tender and mild with a good, fresh flavor. I wasn’t wowed by the fish; but it was solid.

The potato pancakes were housemade, sporting the classic look of a well-made latke with visible shredded potatoes and minimal filler. Their texture was near-perfect, with a lovely crispy exterior, ultra-crunchy edges and a texture that showcased the heft of the potatoes without becoming dense.

But they were also uniquely flavored, with a sweetness I’ve not encountered among potato pancakes I’ve eaten at fish fries in the area. I'm giving these big points for originality, execution and overall deliciousness.

They were served with a choice of applesauce or maple syrup (it was actually pancake syrup, but I won’t belabor the point).

There are a few versions of the old fashioned on the menu. For consistency, I opted for the Wisconsin old fashioned. It was a standard build: muddled and finished with Sprite. Unfortunately, it skewed not only on the sweet side, but on the soda-sweet side with very little brandy or bitters presence.

On the other hand, the maple rye old fashioned featuring Jack Rye, bitters, maple syrup and ginger ale had far more balance and a more spirit forward profile. If I had it all to do over again, I’d go with that one.

That said, both drinks were garnished with orange slices which had been sliced and sitting out long enough that both the flesh and skin were dry and beginning to shrivel at the edges. It might seem a little thing, but the devil is always in the details.

The Stillery is open daily from 11 a.m. to close.