The Killers' Brandon Flowers didn't want to blow the roof off of the city's new $524 million dollar arena, but he sure wanted to test the foundation a little during the arena's first concert on Tuesday night. Lucky for Milwaukee, the building held up just fine while The Killers put on a fittingly memorable performance for the special night.

The Killers' Brandon Flowers didn’t want to blow the roof off of the city’s new $524 million arena, but he sure wanted to test the foundation a little during the arena’s first concert on Tuesday night.

Lucky for Milwaukee, the building held up just fine while The Killers put on a fittingly memorable performance for the special night.

It was the moment fans had been waiting for: Fiserv Forum finally hosted its first ticketed event and did so with one of music’s biggest rock bands, as well as the biggest band to ever come out of Milwaukee, the Violent Femmes.

With two great bands on the lineup and the chance to be part of history with the arena’s first show, there was no shortage of reasons to enjoy a night with The Killers and witness the new arena in person. 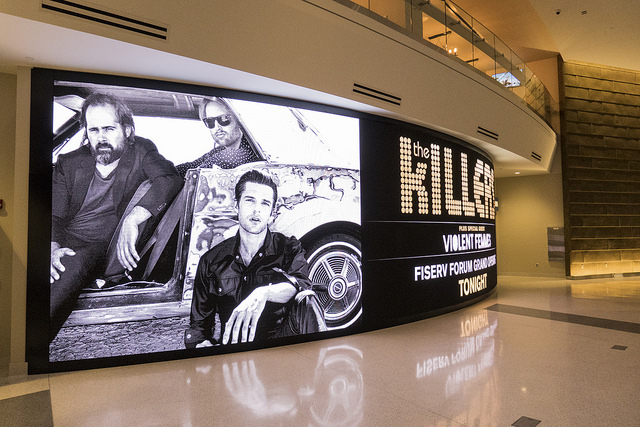 Immediately the performance exceeded my expectations, just moments after walking through the door. After receiving my floor wristband, I made my way toward the stage and saw what I thought was a local unbilled opener warming up the crowd for the Violent Femmes. I googled the lyrics of the song being performed, and the search results directed me to The Killers’ track "From Here on Out." My initial thoughts were, "Great, how am I going to find out the name of this band if they are just performing covers of The Killers?"

Brief moments later, common sense kicked in and I realized the guy standing on stage casually in a T-shirt and jeans, performing acoustically for just about a hundred people, was none other than Brandon Flowers himself. 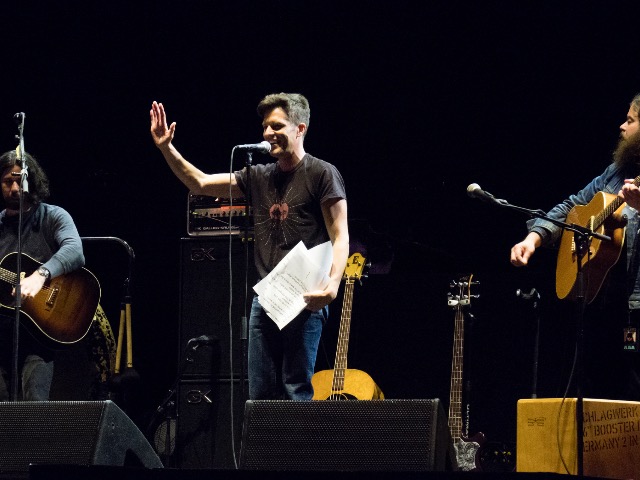 Although The Killers only performed two songs, this special acoustic mini-set was a totally unexpected treat for the band’s most loyal fans. Still an hour before the show was scheduled to begin, you could already tell that the night was going to be an amazing one.

To keep the ball rolling, as fans started to find their seats, it was time for Milwaukee’s own Violent Femmes to take stage. The names of Bucks legends may hang from the rafters at the new arena, but if the same was done for musicians, the Violent Femmes would certainly have banners of their own. Arguably the biggest band to ever come out of Milwaukee, there was no better act to serve as the first to perform in the new arena.

The Femmes performed an hour-long set for the hometown crowd, including tracks like "American Music," "Gone Daddy Gone" and, of course, their hit single "Blister in the Sun."

The set also included two songs requested by Flowers personally – "Love Love Love Love Love" and "Gimme the Car" – as well as a little bit of polka with "I Could Be Anything." 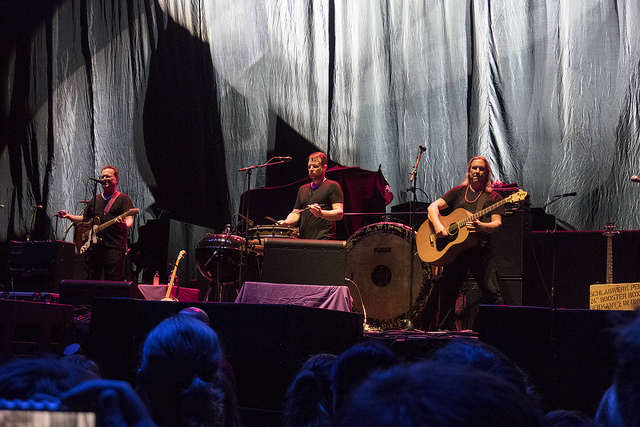 The intersection on the Venn diagram between Femmes fans and Killers fans is perhaps not the largest, as The Killers’ younger audience didn’t seem to know the majority of tracks that the Gordon Gano-led band performed, but the crowd definitely enjoyed the set – and the Femmes’ invitation was just one of many ways that Flowers paid homage to Milwaukee for the inaugural concert.

After a brief set change, it was time for The Killers to again greet their Milwaukee fans. Minutes after 9 p.m., the house lights turned off and the logo for Saturday Night Live’s "Wayne’s World" appeared on the stage’s large video screen.

What I initially thought was the iconic "Alice Cooper’s History Lesson" scene from the 1992 "Wayne’s World" film was actually something much greater. After Wayne asks Alice Cooper if he "comes to Milwaukee often," instead of the original scene, Cooper, Myers and Carvey filmed an entirely new spoof, special for the big night.

Cooper still spoke about Milwaukee (Algonquin for "the good land") but with an updated history which included the Bradley Center, the Violent Femmes and the city’s new arena. The clip ended with The Killers’ introduction and Garth and Wayne’s classic "we’re not worthy" line. Lorne Michaels must have owed The Killers a big favor.

Milwaukee wasn’t worthy either, as The Killers continued to spoil the packed arena by opening their set with their mega hit "Mr. Brightside." Energy levels were instantly high and they never reached a low throughout the 16-song set, which lasted for nearly two hours.

Flowers quickly addressed the special night, joking, "We’ve been playing in that dingy Eagles Ballroom for 15 years. Look at us now!" In fact, it was just last year that The Killers put on a sold-out show for fans at The Rave. Flowers then thanked the Violent Femmes and shared that they played one of the first concerts he ever attended. 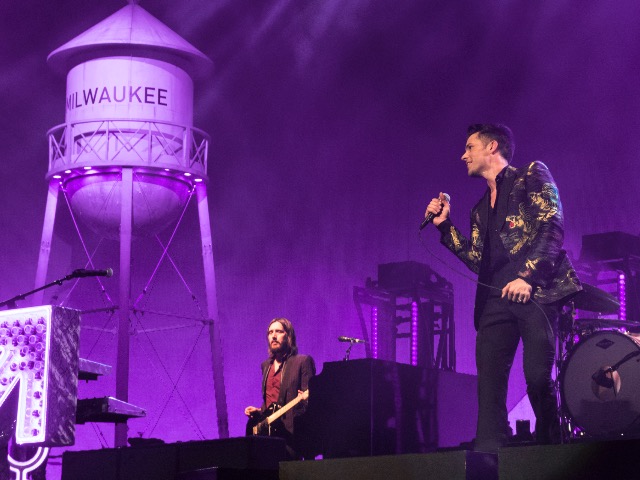 Visually, the performance was great, as well. The stage was clearly inspired by The Killers’ Las Vegas roots but with a little touch of Milwaukee, as the city’s name read across a water tower that sat stage-right. From start to finish, marquee and neon lights turned Juneau Avenue into Las Vegas Boulevard.

What also stole my attention was the band’s large Mars symbol marquee prop, which denotes masculinity, a theme that Flowers sings about in great lengths on their latest album "Wonderful Wonderful." 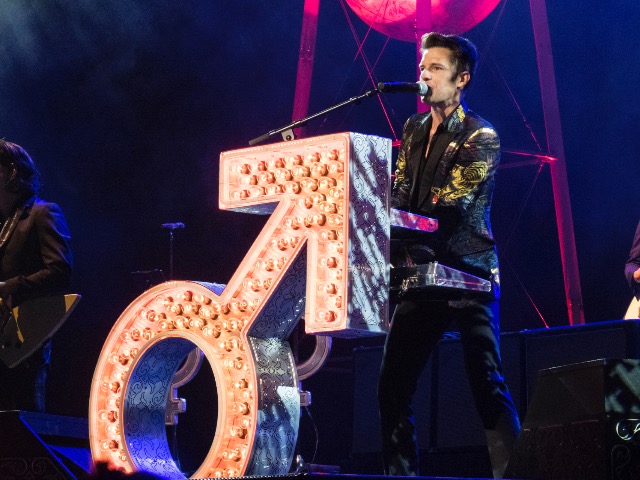 In "The Man," the lead single from that 2017 LP, Flowers pokes fun at masculinity and reflects on the type of guy he used to be. In an interview with Entertainment Weekly, Flowers dug deeper into these themes and shared that "in your head (being a man) is about being tough and bringing home the bacon, but what I’ve come to find is it’s really more about empathy and compassion." Complete with falling confetti from the sky, "The Man" was one of the best performances of the night.

Another highlight of the night came as the first rule was broken at the new arena. Breaking the venue’s "no sign" policy for concerts, a Milwaukee local held up a sign as the band was about to perform their 2006 track, "For Reasons Unknown," pleading to play bass for the song.

Flowers stopped the concert and had the audience weigh in. After making sure that the fan knew the chords – and that he was actually from Milwaukee – he invited the local (named George) on-stage. George delivered – and to celebrate a rocking performance, Flowers and the bassist took a selfie to complete the memorable moment. 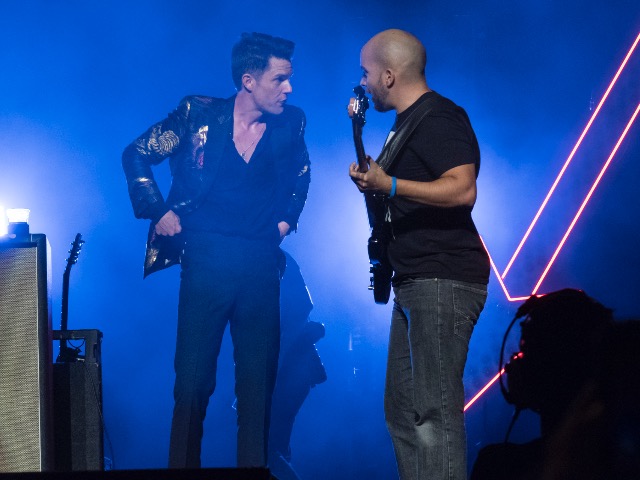 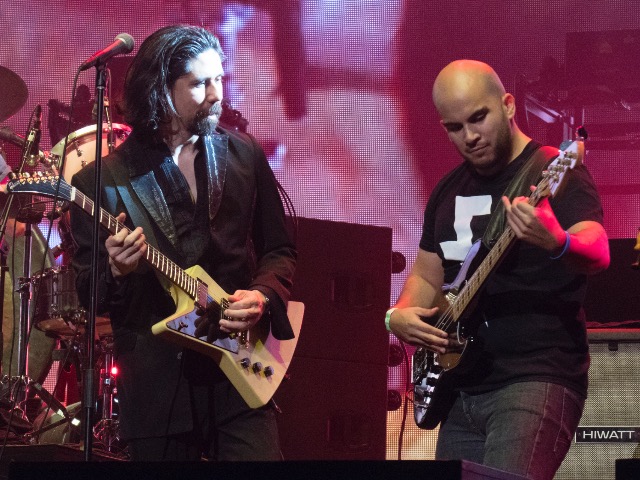 George wasn’t the only Wisconsinite to perform beside Flowers either, as The Killers’ touring guitarist Ted Sablay is a native of Fond du Lac. "We bring a little of Wisconsin with us everywhere we go," Flowers told the crowd.

The Killers continued their set with performances of "Runaways," "Read My Mind" and "All These Things That I’ve Done" to close out the set before their encore performances. Setting the standard for all the encore performances to come at the Fiserv Forum, the Nevada natives finished the night with "The Calling" and "When You Were Young" (typically the last song of their recent live shows).

Then, as a final surprise for the crowd, The Killers invited the Violent Femmes back to the stage for the most Milwaukee song ever: a joint performance of "Making Our Dreams Come True," the theme song from the classic Milwaukee-set sitcom "Laverne & Shirley." 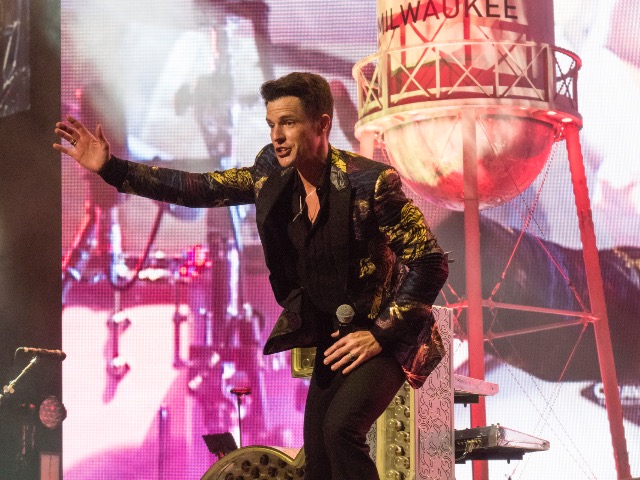 Earlier in the show, Flowers told the crowd, "There are going to be a lot of great concerts in this room. We hope not as good as this one." Only time will tell if the above will hold true, but some of the great acts to come (Foo Fighters, Eagles, Justin Timberlake) will have their work cut out for them.

"Mr. Brightside"
"Spaceman"
"Somebody Told Me"
"The Way It Was"
"Shot at the Night"
"Run for Cover"
"Jenny Was a Friend of Mine"
"Smile Like You Mean It"
"For Reasons Unknown"
"Human"
"The Man"
"Tyson vs. Douglas"
"A Dustland Fairytale"
"Runaways"
"Read My Mind"
"All These Things That I’ve Done"