A Bay View club is the home of Wisconsin's first "Wintry Mix" cocktail. Try it this weekend.

There’s an old adage "when life gives you a crappy winter, make a cocktail." OK, maybe that’s not a proverb of yore, but it might be a new catchphrase thanks to the mixological genius of Patty Pritchard Thompson and Parker Gaitens.

Thompson and Gaitens work together at the South Shore Yacht Club – Thompson is the director of membership and Gaitens is the assistant bar manager – and recently they invented a new drink called "The Wintry Mix."

Inspired by meteorologists perpetual use of the expression to describe precipitation consisting of both rain and snow, Thompson posted to Facebook what she thought at the time was a joke.

The positive and entertaining responses to her post made Thompson realize she really did want to concoct an icy libation. She brainstormed a few ideas and then shared the idea with Gaitens and he helped make The Wintry Mix a reality.

"Between the two of us we nailed it," says Thompson. "It has a little pavement, a little pothole filler, a little slush, a little snow, a little sparkle and a little salt. Basically it’s a representation of the cycle of winter, the beginning of winter is the white and sparkly top layer and the end of winter is at the bottom, when it’s all dirty snow and potholes." 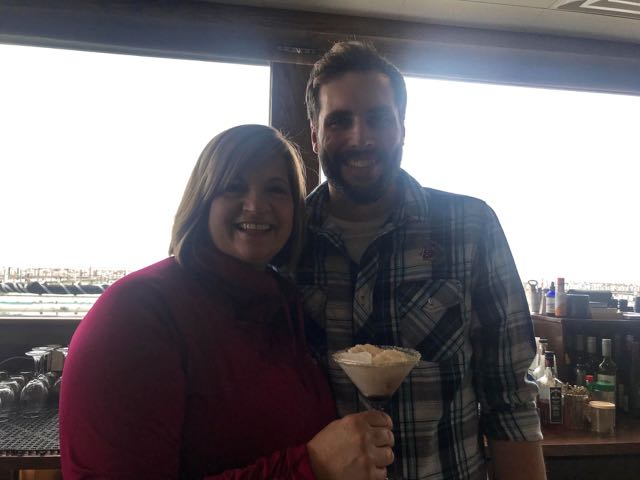 The cocktail, which is served in a martini glass, is a twist on a white Russian. The rim is dipped in a sugar and salt mixture representing the road salt sprinkled on Milwaukee streets and sidewalks in winter and adorned with a sharp-looking ice shard.

"It’s my shard garnish," says Thompson. "I was inspired by looking out the windows here, onto the lake, and seeing how the ice cracks at the surface."

Thompson made her shard garnishes by freezing a thin layer of water on a baking sheet and then smashing it with a hammer. "That was really fun," says Thompson.

The Wintry Mix is crafted in layers. The bottom layer / first ingredient is a few squirts of black gel frosting or chocolate syrup to symbolize the street asphalt and then a sprinkle of black sugar beads to imitate the filling of potholes. Next there’s a few jiggers of Kahlua in honor of all the brown leaves trapped under the snow, topped with a slushy mix of Bailey’s, vodka and ice that resembles dirty city snow, followed by half and half and a generous sprinkle of bright, white crystal sugar to give it that "pure as the driven snow" look. 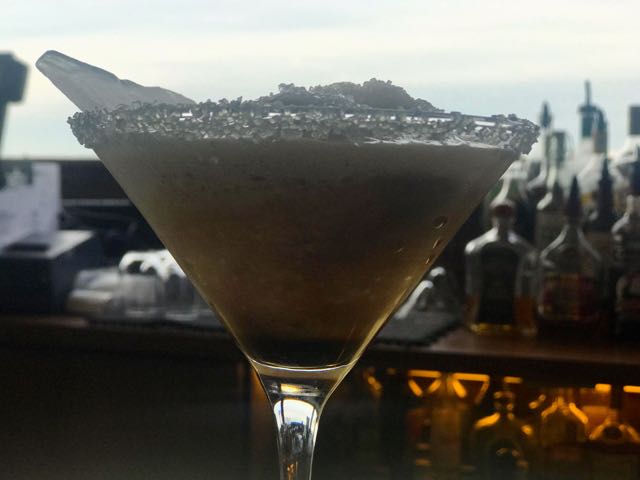 "I’ve sampled about 100 of them and I think they turned out great," says Thompson, who also workshopped the drink with her holiday cocktail club – a group of seven women that gets together during the holiday season to invent unique adult beverages.

The Wintry Mix cocktail ($7) is available to South Shore Yacht Club members and their guests all week. The public is invited to try the drink during the Yacht Club’s open house on Saturday, March 16 from 2 to 5 p.m.

"Ideally, we’d like to get a meteorologist to try it," says Thompson. "But everyone and anyone is welcome to sample it on Saturday."