Fifty years ago this summer, the Commerce Building was also welcoming a new tenant. On June 10, 1966, the Ad Lib Nightclub opened at 323 W. Wells St., kicking off 10 years of non-stop go-go drama.

Formerly an army surplus store, the Ad Lib storefront was beautifully redesigned as a cocktail lounge, supper club and cabaret. "Richly gilded in golds and scarlets, the Ad Lib is brassy classy with ornate glass chandeliers, a big mirrored wall and soft pink lighting," said the Milwaukee Journal. "The setting is both plush and posh."

Although multiple people were eventually licensed as the bar’s legal owner, the Ad Lib was always part of Frank Balistrieri’s nightlife syndicate. Balistrieri, his family and his associates had deep involvement in almost a dozen bars between the 1950s and 1980s. By 1966, Balistrieri was truly one of the most powerful men in Milwaukee, and 4th and Wells was the heart of a growing empire.

The Ad Lib’s heart beat like a jazz drum. With a 225-person capacity, the venue was frequently oversold, and reservations became a hot commodity. Keeping up this momentum became very challenging for promoters, and nightlife critics wondered how long they could keep the names coming.

And then, just like that, the Ad Lib abruptly switched to an all-striptease format in August 1967.

"We’re only doing this temporarily," promised manager Jimmy Jennaro. "I already have jazzmen booked for September and November." But this wasn’t exactly true, as the Ad Lib remained a strip joint for the next six years.

There was money to be made in the Sexual Revolution. The Ad Lib joined a growing red light district that already included the Brass Rail (744 N. 3rd St.), the Downtowner Bar (340 W. Wells St.), the Princess Theater (738 N. 3rd St.) and many adult bookstores. What had been Milwaukee’s Theater Row was quickly becoming a city of night.

At the time, strict ordinances made it illegal for female entertainers to sit at any table, in any booth or elsewhere on the premises of a tavern with a male customer, or for performers to solicit drinks from anyone of the opposite sex. Female performers – including singers and musicians – were not allowed to accept drinks from the audience, although their male companions were encouraged to do so.

"Ever since Eve, mankind has recognized that one thing leads to another," said the all-male Wisconsin Supreme Court, upholding the law in February 1963. "The regulation of conduct of female employees … is a necessary and reasonable exercise of police power."

This didn’t stop the Ad Lib B-Girls, who were as famous for drink hustling as they were for losing their tops. Hostesses hawked private meetings between dancers and patrons that were little more than wallet heists. Easy marks saw their $20 bills disappear as the giggling gals double-fisted shot after shot of overpriced "liquor" and raced back to the dressing room (the house always wins, after all, when the shots are secretly tap water).

The Ad Lib became known for having a higher class of stripper than the Brass Rail ("rough trade") or the Downtowner ("where strippers go to die").  It was also known for remarkably racy floor shows. "Vice squads are cracking down on strip clubs," said the Milwaukee Sentinel.  "The city allows dancers to strip down to their underwear, but at the Ad Lib, many dance in G-strings or less." Shortly thereafter, a dancer was arrested for appearing bottomless on stage and another was arrested for "inappropriately" touching a police officer.

With the bar business in the frying pan, the Ad Lib fearlessly jumped into the fire. Without a blink, management launched a surprising new line-up in early 1969.

One night, the Ad Lib reassigned its regular girls to the Brass Rail and announced three new "Go-Go Girls" would replace them. As the so-called go-gos took the stage for the first time, the music cranked up, and heads spun in disbelief.  "Now appearing: The Third Sex!" yelled the emcee, "an all-star cast of female impersonators!"

"I was a stripper there for years," said Jamie Gays, one of Milwaukee’s LGBTQ elders, who auditioned at the Ad Lib with Frank Balistrieri himself. "During the Vietnam War … guys would throw their dog tags up on the stage. I’d charge them a dollar to get them back. If they only knew that I was a guy … they would have killed me.

"They were all guys except for one: Misty!" 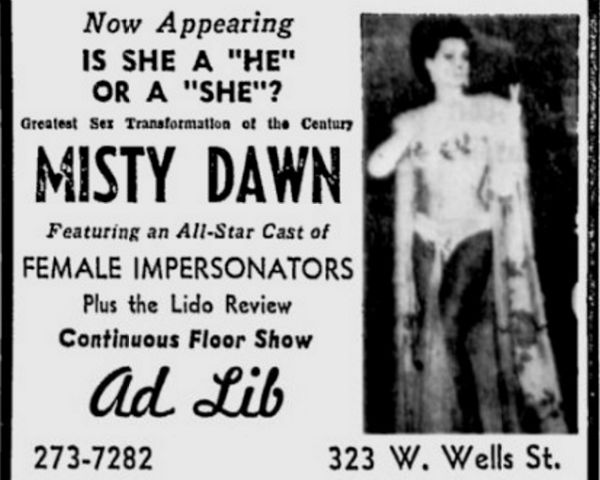 Misty Dawn, a transgender performer billed as "The World’s Most Beautiful Boy," quickly became the star of the floorshow. "Is She a ‘He’ or a ‘She?’" screamed the ads. With a stage presence that was bigger than life, Misty brought big-city Chicago burlesque that audiences would never forget.

"She twists and wriggles to the tune of a scratchy record," reported the Milwaukee Journal.  "Wearing only a G-string and a mesh bra, Misty squirms towards the stairway leading off stage. With a suggestive smile over her shoulder, she unfastens the G-string and wiggles it off.  She flips it over her shoulder and makes a naked posterior exit up the stairs and out of sight."

Switching out the cast was smart business for the Ad Lib. The nightclub was busier than ever, with a sexually charged mix of clueless straights, clued-in gays, made men, vice cops and FBI detectives. The "female impersonators" were far cheaper talent than national jazz performers or burlesque dancers. Gay men were loyal customers, generous spenders and less likely to cause trouble. Best of all, the flexible gender identities of the performers provided a flexible defense as the Ad Lib’s owners continued to push legal boundaries.

Ushering in the New Year with "the most unusual show of the century," Misty Dawn exposed her breasts and buttocks on January 20, 1970 and was promptly arrested. Misty insisted that she was born a man and had been surgically transformed into a woman. Ad Lib management argued that since Misty was born a man, it was legal for "him" to dance topless and/or bottomless, sit with male patrons and solicit drinks.

As bizarre as it must have seemed in 1970, this was a groundbreaking and genius defense. The City of Milwaukee had long maintained that female impersonators were subject to the same regulations as female entertainers. Now, city attorneys struggled to compose charges, since they were technically unable to determine if Misty had displayed male or female anatomy.  "Attorneys couldn’t decide whether to refer to Misty in the complaint as ‘He,’ ‘She," or ‘It,’" awkwardly reported The Milwaukee Journal. "They finally settled on ‘You.’"

Local reporters pondered: Could someone actually be subpoenaed to prove her biology to the court? With that same over-the-shoulder smile, Misty cackled at the idea. Meanwhile, the Ad Lib brilliantly banked on the scandal, inviting patrons to "Come See the Talk of the Town – Every Last Inch of Her!"

In the end, Misty got off with a $50 fine, but the publicity had rightly earned her (and the Ad Lib) a considerable amount of money. And she wasn’t the only Ad Lib girl making headlines.

Everyone, from the Milwaukee Police Department to the Attorney General, publicly vowed to shut down the Ad Lib. You wouldn’t know it from the number of vice cops who regularly patronized the bar, drinking for free all night long. When questioned, they would only give the name of their superior officer, who in turn would give out his.

"Apparently [the nightclub] feels it can operate with impunity," said District Attorney E. Michael McCann. "Let us be clear. The Ad Lib features female impersonators. It hardly adds anything to our community."

The Third Sex shows, which started as a clever legal loophole, had become a lightning rod liability. "All-Girl" shows came back to the Ad Lib marquee. Although few of the impersonators actually left the line-up, the gender policing stopped.

"Business is down $500/week," said a bartender to an FBI agent, "but it’s kept the cops off our backs." The bartender also lamented that "excess numbers of homosexual customers" had taken their dollars elsewhere.

"Nowadays, it might seem strange that a strip club became a gay hangout," said a Wisconsin LGBT History Project contributor. "I mean, they didn’t even have male strippers! [The manager] always threatened to get some, but it never happened.

"Ad Lib didn’t expect you to pass [as straight]. As long as you were spending money and not hassling the girls, you were welcome to stay as long as you wanted. You never knew what you’d walk into or what you’d pick up. Honey, it was like going to the carnival!"

Downtown striptease was on the decline by November 1973, when the Sentinel made its final Ad Lib visit. "It’s a slick, fast, nonstop show without verbal graffiti. Cigar smoking bartenders change 45RPM records and shout for applause. Girls operate their own light board and manage their own feather boas. A chenille tiger named Tolly has all the fun. The usual assortment of young men and balding grandfather types watch girls take it off. Later, couples, conventioneers and young hippie types pay $1 per person to see Lilli, Miss Stuttgart Germany 1969 and a Marquette University PhD holder, work her bubble blowing machine."

Shortly thereafter, the Ad Lib switched back to hassle-free, lower-cost local music. On June 30, 1975, it all ended with a whimper when the liquor license quietly expired. Unable to keep the license, and facing sizable tax liens, management moved on to a disastrous run at the nearby Empire Lounge (716 N. Plankinton Ave.). The gilded gold and scarlet cabaret was shuttered for several years, until La Scala restaurant opened in November 1979 for a four-year run. It was the last hurrah for Balistrieri nightlife. 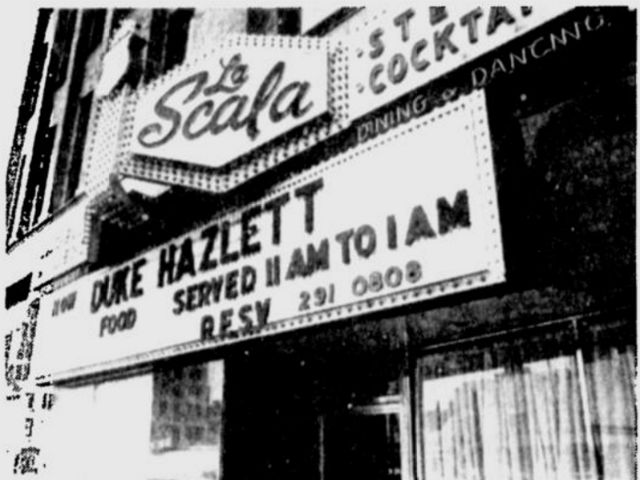 Convicted of multiple charges, Frank Balistrieri passed away in 1993 while serving concurrent prison sentences. By that time, his empire had been dismantled, and most of his nightlife properties had already been demolished. What had been a rambunctious red light district is now a conflicted mix of sterile superblocks and lifeless surface parking. Empty lots tell no tales.

Fortunately, the Commerce Building stands proud at 4th and Wells. And soon, SpringHill Suites will welcome a full-service ground floor restaurant in the Ad Lib’s former footprint. If those walls could talk, guests would enjoy rather sensational dinner theater. 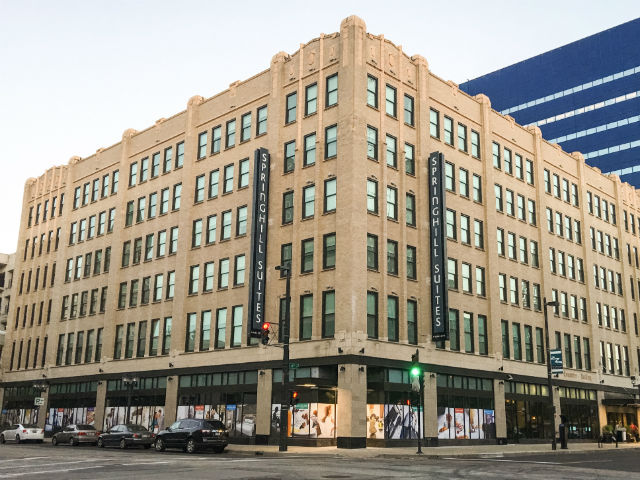 Any additional information about the Ad Lib is welcomed. Please email info@milwaukeepride.org or visit the Wisconsin LGBT History Project website.