In 1901, Riverwest residents battled on the frozen Milwaukee River

In the winter between 1900 and 1901, a pitched battle erupted on the frozen Milwaukee River above the North Avenue dam between enraged ice harvesters and the equally violent crew of a steam-powered launch. The newspapers called it "The Ice War." On a section of river that has witnessed many strange things over the years, the ice war was perhaps the strangest.

In the winter between 1900 and 1901, a pitched battle erupted on the frozen Milwaukee River above the North Avenue dam between enraged ice harvesters and the equally violent crew of a steam-powered launch. The newspapers called it "The Ice War." On a section of river that has witnessed many strange things over the years, the ice war was perhaps the strangest.

As if the riot-on-ice aspect wasn’t odd enough, the fighting was accompanied by jaunty music provided by a brass band aboard the launch.

The war lasted six weeks, was witnessed by hundreds of spectators and was heavily reported in the city’s newspapers. Onlookers and reporters thought it hilarious, but real injuries were sustained, working men had their livelihoods threatened and it all had to do with … ice.

We will rejoin the war in progress in a moment. To understand why these warmly dressed men are punching each other in the middle of a frozen river, you need to know why ice was once worth fighting over.

The ice business was born in the earliest days of the city, when a man named Henry Kroeger, also known as "Ice Bear" Kroeger, started cutting 100-pound blocks of ice from the harbor in winter and storing it in a heavily insulated icehouse for resale in the summer months. Butchers were his biggest customers.

By the winter of 1892-93, the city was home to 10 wholesale ice dealers with a total winter employment of at least 1,200 people and an annual harvest of 300,000 tons – and that figure didn’t include the ice cutting and storing operations conducted by the city’s breweries, generally another 50,000 tons.

Increasing water contamination from the growing city gradually moved the ice business northwards up the Milwaukee River. By 1900, ice harvesting took place at several locations along the upper river, as well as on many area lakes.

Milwaukee was a good-sized city by then, with a population of 285,000 and a major industry of brewing, storing and transporting lager beer. Lager must be kept cold, which meant ice. Tons of ice. Plus, just about every one of the city’s many homes had an icebox to keep food cool.

It was easy to keep food cool in winter, obviously, but summer required frequent visits from the iceman, who set huge blocks of ice into insulated tin-lined wooden iceboxes.

Homeowners contracted with an ice company by purchasing coupon booklets in advance (at the turn of the 20th century, 750 pounds worth of ice cost $2 – about two days wages for a laborer), handing over a coupon each time ice was delivered. Homeowners benefitted from locking in a set price, and the iceman didn’t have to handle money.

Your ice company would give you a little cardboard sign to place in your window whenever you needed ice. Turn it one way, and the sign read "25," flip it the other way and it read "50." The iceman would come down your street, seven days a week in summer, watching for signs and delivering a 25- or a 50-pound block of ice where required.

Ice, in other words, was a huge business in the state, and Wisconsin Lakes Ice Co., based in Milwaukee, dominated the market. It was founded in 1849 by German immigrant John Kopmeier. By the turn of the century, the company employed 225 teamsters, all neatly dressed in dark blue uniforms with bright brass buttons. The company owned more than 500 delivery horses. 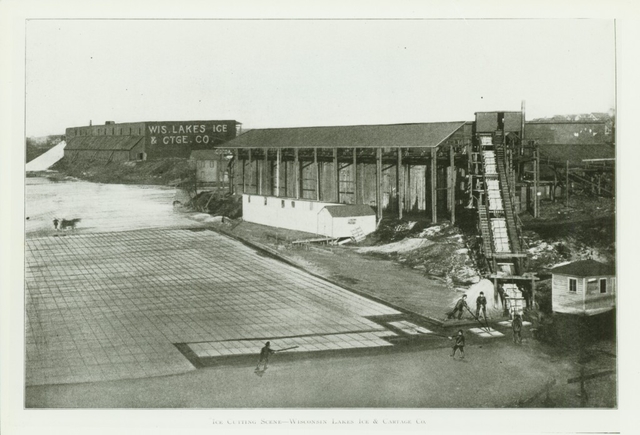 At its height, Wisconsin Lakes owned 20 ice houses across southeastern Wisconsin, including four large operations on the Milwaukee River that employed hundreds of laborers at $1 a day, paid in cash each night. There wasn’t much of a social safety net in those days, and jobs for common laborers tended to be seasonal. Many workers, especially Polish immigrants settling in Riverwest, depended on ice cutting to get their families through the winters.

The Wisconsin Lakes Milwaukee River icehouses included a pair on the west bank at North Avenue, one south of the bridge and the other north of the bridge, a third a few blocks further north, atop the bluff near the foot of Center Street on the east side of the Milwaukee Road’s Beerline track, and on the east bank the company also had an icehouse on the river south of Bradford Avenue.

Once the ice reached a thickness of 18 inches, workers shoveled snow off the "ice field" – the section of frozen river adjoining the icehouse – then horse-drawn plows carved deep grooves in the ice in an exact grid pattern. Workers moved in with saws, long chisels, and steel-tipped pikes and systematically broke off sections and floated them to a conveyor, which carried the ice blocks through a rotating planer. The planer milled off the surface, where most of the dirt and debris were to be found.

From there, the now uniformly-sized blocks entered the cavernous interior of the icehouse where more workers skidded them neatly into organized stacks, spreading heavy layers of insulating straw, wood shavings or sawdust as they went. Ice could be stored for two or three years this way.

Work was suspended when it got too cold. Sub-zero temperatures froze the ice channels as fast as workers could open them.

Now the plot thickens. An upstart firm, the Pike & North Lakes Ice Co., built a large icehouse on an area lake. It had substantial financial backing, experienced ice men in control and intended to be a major player in the Milwaukee market dominated by Wisconsin Lakes. It planned to use heavy advertising to tout the purity of its lakes and capitalize on public concerns over the increasingly dirty Milwaukee River.

There was, however, a small strip of land between North Lake’s new icehouse and the railroad siding. Someone, probably acting under the direction of the Wisconsin Lakes Co., bought this land and refused to grant North Lakes permission to cross the property, which it had to do in order to ship out its ice.

One day in winter of 1900-01, Wisconsin Lakes Ice Co. had 300 men at work harvesting ice on the upper Milwaukee River when a steam-powered launch, the Julius Goll, appeared, covered with boiler plate and equipped with an ice-breaking prow. To the cheerful accompaniment of its brass band, the launch proceeded to steam up and down the river smashing up the Wisconsin Lakes ice fields.

The Wisconsin Lakes Co. was certain the North Lakes firm hired the boat, but the captain of the Julius Goll, a man named Biggs, wasn’t talking. Biggs told reporters he was trying to establish an off-season river excursion service between the North Avenue dam and the Blatz Park beer garden, two miles upstream. Hence, he added, the reason for the band.

The band played on, but the husky youths on board were far more than excursionists. They fought off the attacks of the men of the Wisconsin Lakes Company, pried the vessel free when it stuck on ice too thick to be borne down and broken by the special prow, cut heavy strands of barbed wire strung from bank to bank, warded off heavy timbers studded with spikes launched by the defenders, and made patches when their armored vessel was holed. This went on for six weeks whenever the river re-froze. No more ice was cut. – "The Wisconsin Ice Trade," by Lee E. Lawrence, The Wisconsin Magazine of History, Vol. 48, No. 4 (Summer, 1965).

On Sunday, Jan. 20, 1901, the battle reached a fever pitch to the delight of nearly 1,000 spectators gathered on the North Avenue bridge and both banks of the river. Ice company employees tried various obstructions to block the little steamer, including stringing a line of roped-together rowboats across the river and protecting the edges of the ice fields with wooden beams, but nothing seemed to stop the Goll. A squad of police marched onto the ice to prevent an all-out brawl between the crew of the boat and ice company employees.

"About 200 Poles," the Journal breathlessly reported, "whose livelihood depends on the harvesting of the ice, are becoming aroused over the work of the Goll. Some of the representatives of the ice company fear that they are liable to become vicious over the matter and then they will take the affair into their own hands."

In the early morning hours of Monday, Jan. 21, the little steamer collided hard with a thick shelf of ice, opened a hull seam and had to call it quits. However, the boat had done so much damage that the paper said it was doubtful any further ice could be harvested that season.

In its April 5, 1901 edition, the Journal reported, "The ice is all gone, and there is nothing to fight about, so the famous 'ice cases' have been dismissed in police court by mutual consent."

The paper continued, "During the excitement on the river, a hole was punched in the 'battleship' Julius Goll, large quantities of ice cut by the Wisconsin Lake Ice Company were destroyed, 'Admiral' Biggs got a broken arm and the adherents of both sides had numerous cold baths and bruises distributed among them."

In an October 30, 1901 article on the opening of the North Avenue dam to draw down the level of the river to facilitate sewer construction along the west bank, the Journal reported the owners of the Wisconsin Lake Ice Co. were using the occasion to reshape the shore edge to ease ice harvesting.

"At the same time," the Journal continued, "the owners of that redoubtable fighting ship, the steamer Goll, which last year established an excursion route above the dam and incidentally broke up a large quantity of ice which was usually stored by the Wisconsin Lakes Ice company, are expressing some concern at the possibility of the water remaining too low all winter for the excursion business. In the meantime many people who were entertained by the quarrel between the owners of the Goll and the Wisconsin Lakes company last winter are interestedly awaiting developments."

A truce was established, but the threat of renewed ice wars only really ended in 1904, when the Pike & North Lakes Ice Co. was absorbed by Wisconsin Lakes Ice Co. Its backers were said to have lost $100,000 in the failed venture – a staggering sum in those days.

Wisconsin Lakes’ last natural ice harvest was in 1923. As the river became more polluted, the company switched to manufacturing machine-made ice. As late as 1940, the company was still operating 212 ice routes in the Milwaukee area. In time, the company added coal and fuel oil deliveries and operated 24 gas stations under the "Hometown" name. It was headquartered at 1518 E. North Ave., just two blocks from the battlefield of 1901. In 2005, Hometown Inc. sold its 150-year-old ice business to a Canadian firm, Arctic Glacier, and closed its last remaining Milwaukee ice plant.

Carl Swanson Special to OnMilwaukee.com @MilwaukeeNote
Carl Swanson is a magazine editor and also blogs about his adopted hometown of Milwaukee. He has worked in the publishing industry for more than 25 years. He lives in Milwaukee's Riverwest neighborhood with his wife, three children and two cats.